When looking to escape from our monotonous nine to five daily grind, we often seek out exotic destinations and different environments from our own; worlds unknown.

Lured by the ancient history of mummies in tombs, colossal pyramids, vast desert plains, mythical stone carvings, the lore of alien intervention and King Tut, Egypt is a popular choice by many a traveler; that unknown world. In fact, Egypt is visited by an average of nearly ten million international tourists a year.

In search of ancient civilizations and the origins of Mother Earth, some of the most visited places in Egypt which offer travelers spectacular views and a wealth of ancient history include: Giza Necropolis, popularly known as "Pyramids of Giza". located closely to the nearby southwestern districts of Cairo. The giant Great Pyramids of Giza was built as a tomb for Pharaoh Khufu, over the span of twenty years and is the oldest and largest seventh wonder of the world. It stands at an awe inspiring height of four hundred and fifty five feet. The site also includes the legendary Great Sphinx</B. Abu Simbel. The Abu Simbel twin temples are located on the south side of Egypt off the west bank of Lake Nasser. These gigantic monuments were hand carved from the mountain sides in thirteen century BCE as a homage to Queen Nefertari and Pharaoh Ramesses II.

The Mosque of Ibn Tulun Located in the inner city of Cairo, Ibn Tulun is recorded as the oldest and largest mosque in the history of Cairo. It was built between 876 and 879 AD by Egyptian governor Ahmad ibn Tulun. It consists of a beautifully laid out courtyards and is also known by local folklore to have been the true landing spot of Noah's Ark.

Although spectacular and majestic, these sites are commonly known, and being close to the metropolis of Cairo, are a bit "played out" by tourists.

When reaching further and deeper past the hustling and bustling markets of Cairo and the desert plateau of Giza, deeper down to the less explored southern tip of Egypt, lies the Blue Desert.

Situated near the Red Sea in the most Southernly part of Egypt in the Sinai Peninsula, only a few miles from St. Catherineís Monastery, the Blue Desert spans 8 miles in diameter. 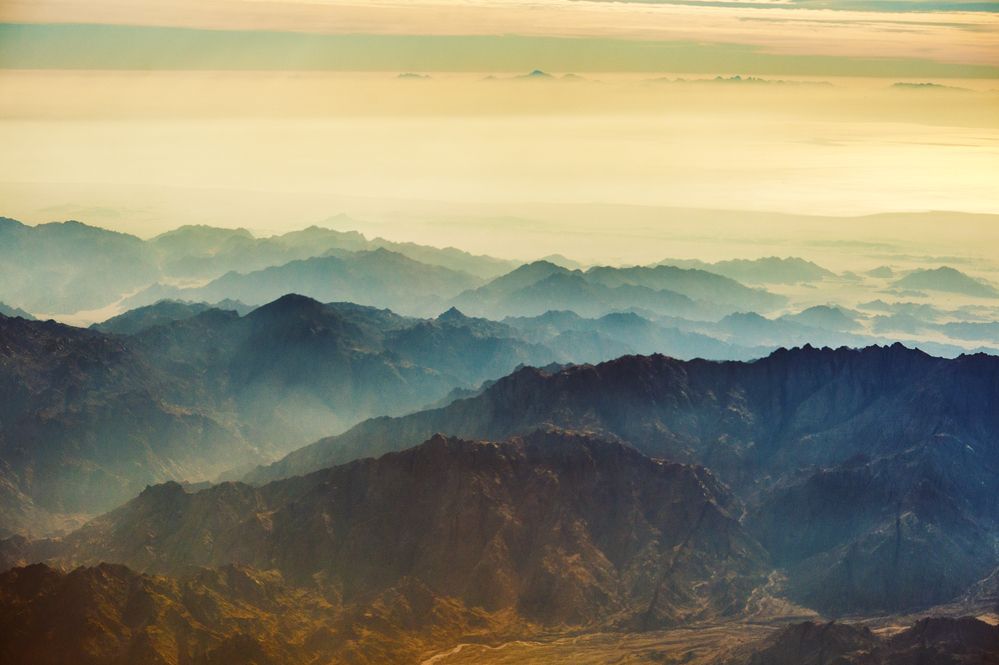 What is unique about the Blue Desert is its rock formations were painted blue by the acclaimed Belgian artist Jean Verame. Jean was awarded 10 tonnes of paint by the United Nations, and granted permission by Egyptian President Anwar Sadat. The painting of the rocks was to commemorate the Egypt and Israel Peace Treaty in 1979.

With mild and cool temperatures in the evening and top temperatures of 36 degrees celsius during the day, the Blue desert is a wonderful place to find calmness and peace. If you enjoy yoga, hiking and camping you will thoroughly enjoy your journey through the quiet Blue Desert with its vividly stunning blue rocks against the backdrop of sandstone hills; no, not a mirage, a hidden paradise.

It's definitely on my list of places I'd love to visit soon.

I went to Egypt in Dec 2016. After spending a couple of days in Cairo, I flew to Luxor then took a nile cruise to Aswan. Abu Simbel is truly magnificent. Don't forget Alexandria. It has the best food in Egypt and the library is grand. I wish you luck and hope you can visit Egypt soon.

Nice info. It is still on my bucket list to visit this places. The history of it is mind blowing. I mean the hidden history of the pyramids. :) I'll resteem :)

Hi, I'm Nader from Egypt
Nice post, Are you here in Egypt?

nope; hoping to visit soon though! how do you like living over there?

it's on mine as well.

Excellent post with beautiful pictures. Egypt has always been on my bucket list, hopefully I will visit those ancient sites soon :)

i can only wish the same!

thank you for sharing!