Hello! I'm pretty new to Steemit. It's nice to be here!

I haven't had much of a presence anywhere but Instagram recently, and it's interesting to be hanging around in a new, very different haunt. I've been inspired by what I've seen here to try my hand at something a bit longer then a picture and a string of hashtags.
Needless to say, I haven't done alot of writing lately, so please bear with me! 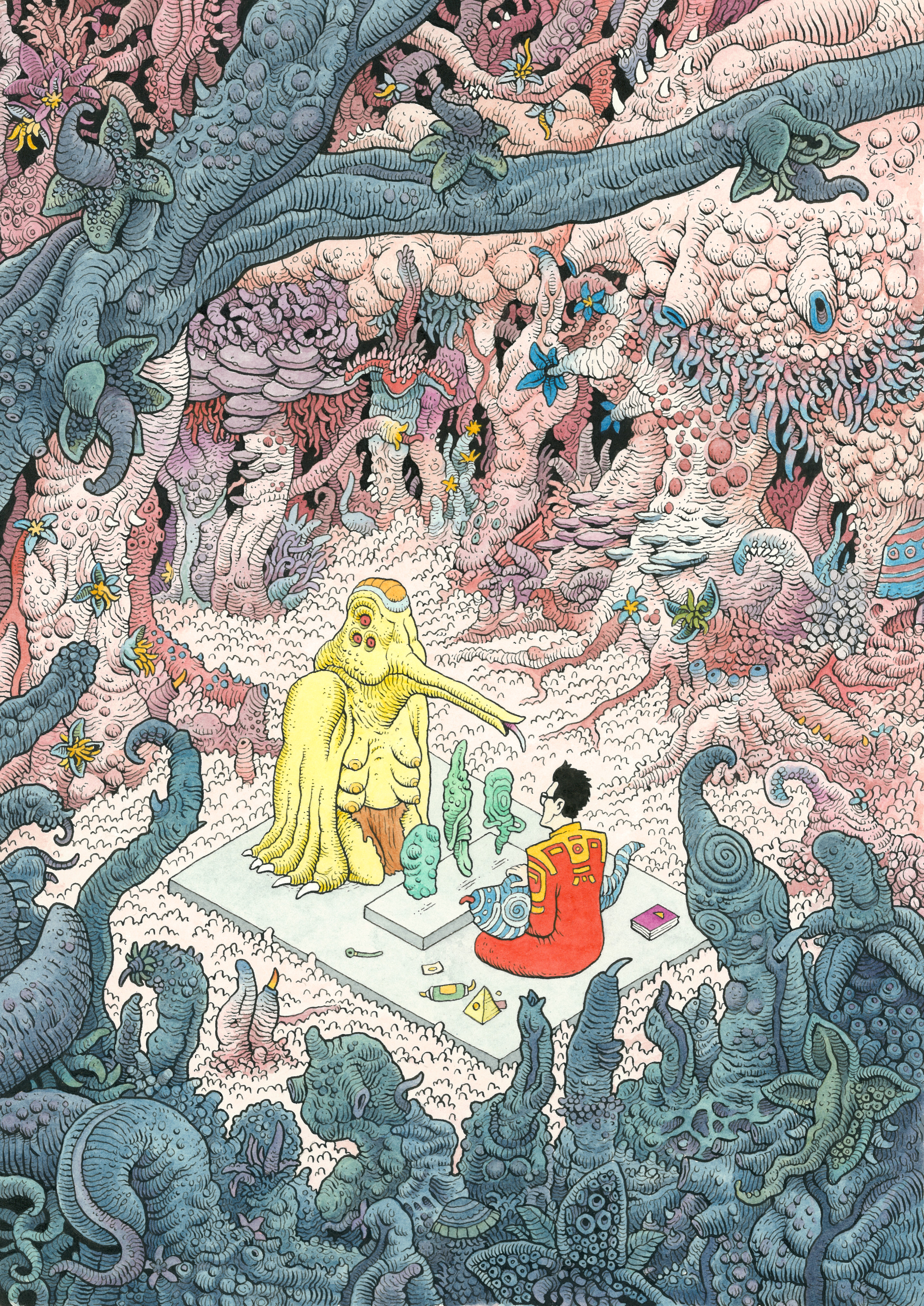 I thought it might be interesting to provide something of an introduction, and for the people who might be familiar with my Unpronounceable Adventures, an explanation (of sorts). If you've read them, you wouldn't be alone in finding them confounding. They are intentionally so, and as a long form experiment in surrealist narrative, they make my mind bend a bit too - that's the place that I've been trying to explore all these years, where the mind bends. 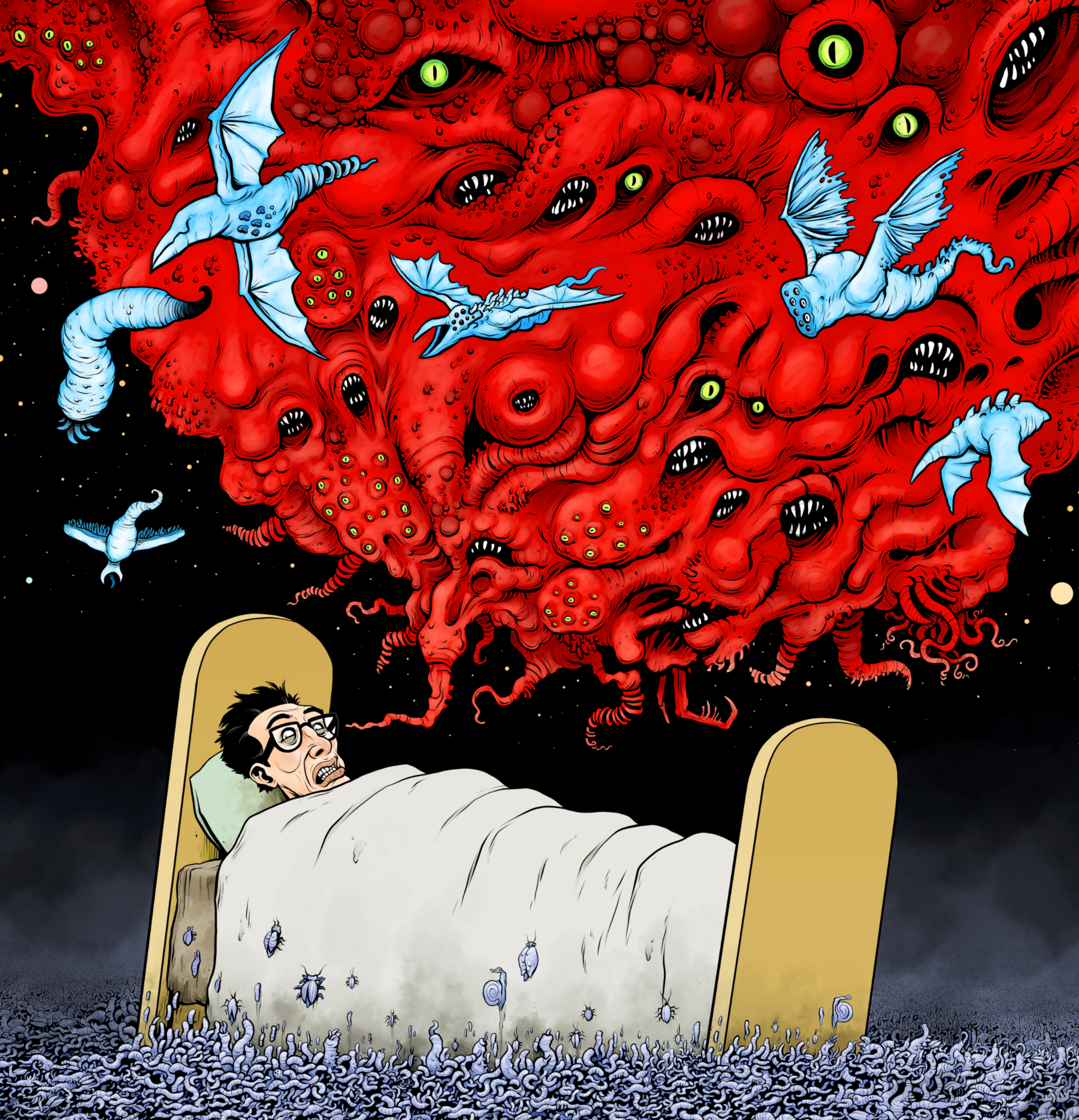 So who is Mr Unpronounceable?
I tend to describe him as a homeless, delusional Necromancer; although he is often housed, sometimes clear headed and occasionally cringes away from the dead. He's a Gutter Wizard, a prude, a howling madman and guilty murderer.

Mr Unpronounceable began as a just another random character in a comic among many, included amongst my weekly strips that were published in Auckland University's Craccum Magazine, New Zealand 2001.

I was 21 years old and obsessed with Carl Jung's concept of synchronicity, feverishly trying to achieve lucidity in my dreams (barring a couple of very interesting experiences, to little effect) and fascinated with the idea of a collective, occult consciousness. Like many young people do, I'd placed myself squarely at the centre of the Universe and convinced myself that there was a pattern to be discerned and a meaning to events that weren't really connected in any causal way. 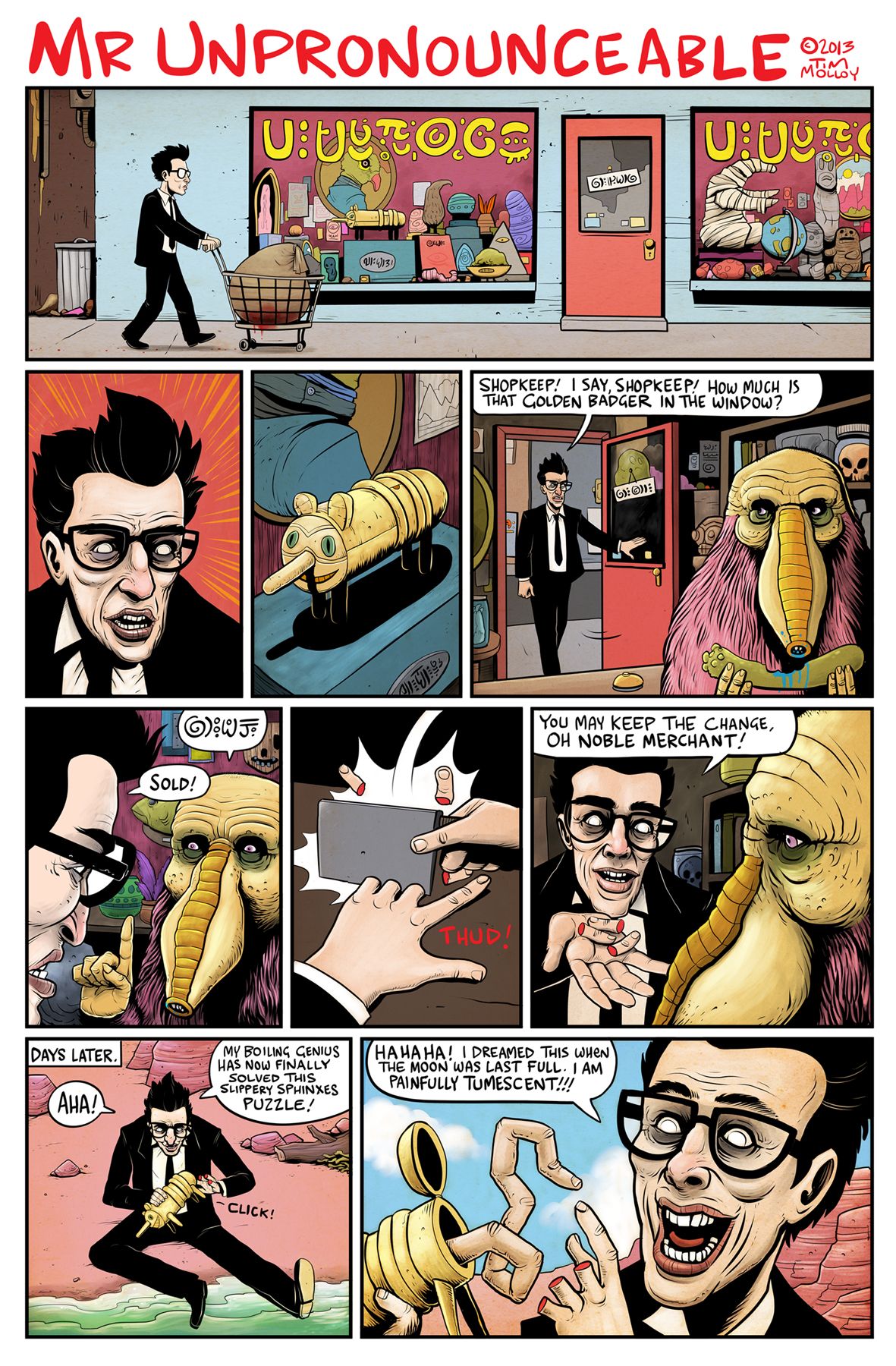 My work had always been a little weird, but it was over the period of time that I was doing these weekly strips for the University Rag that I embraced fully-fledged Surrealism (or what I called Surrealism ) in my comics.
The strips were a collection of disjointed narratives that were connected by a symbolic element in the first and last panels, and I was under pressure to whip up a comic for the coming edition.
Around this point I'd been looking at alot of art by Helnwein, and I came across this image. It's called 'The Free Spirit' and something about the feeling of intense repression I saw in the image, combined with the title set my mind running and in a very short time Mr Unpronounceable was born. 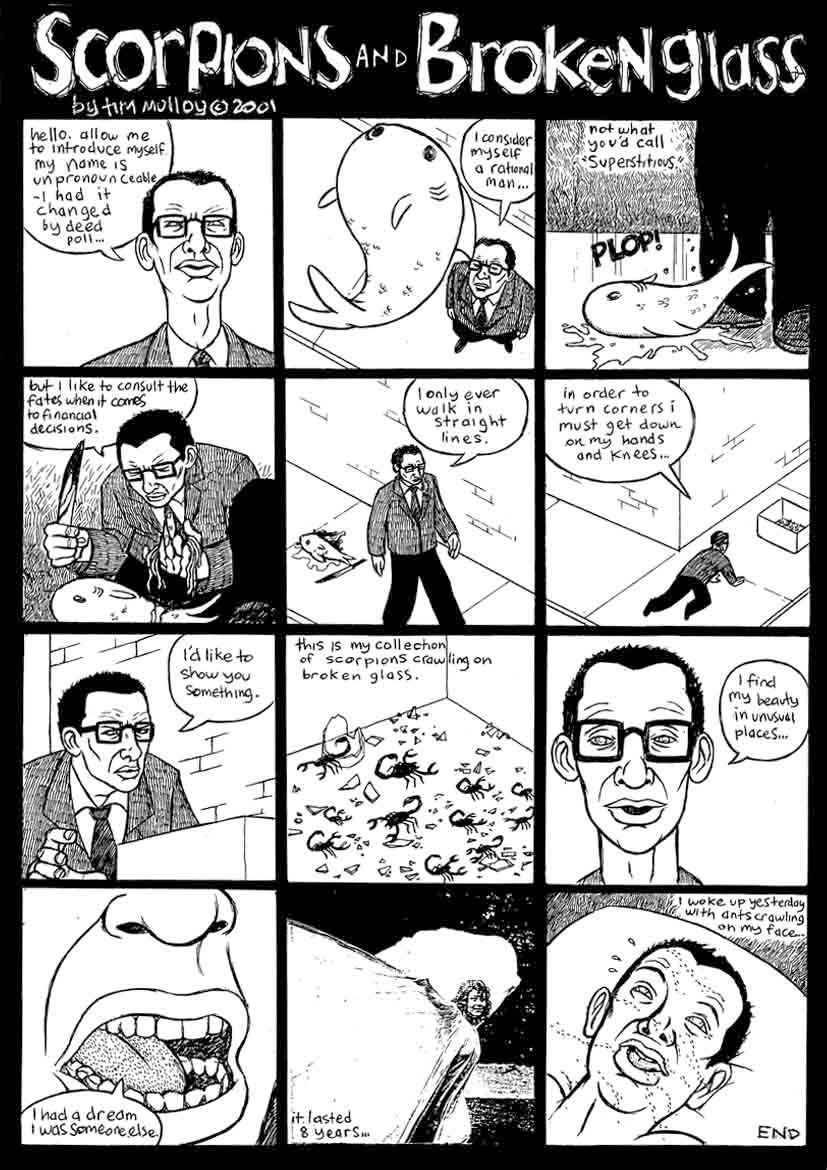 The character of Mr U had become a lightning rod for all my ideas about surreal comics.
He had became my preferred way to express a lot of what I was going through as I dealt with with a slow climb out of a childhood Catholicism that I felt very deeply, into a young adulthood drenched in weird art, armchair occultism and paranoid conspiracy theory.
Mr Unpronounceable became a way for me to navigate these waters, without falling completely overboard. His insatiable craving for Occult Secrets became a way to self-parody my own journey through these often murky realms. 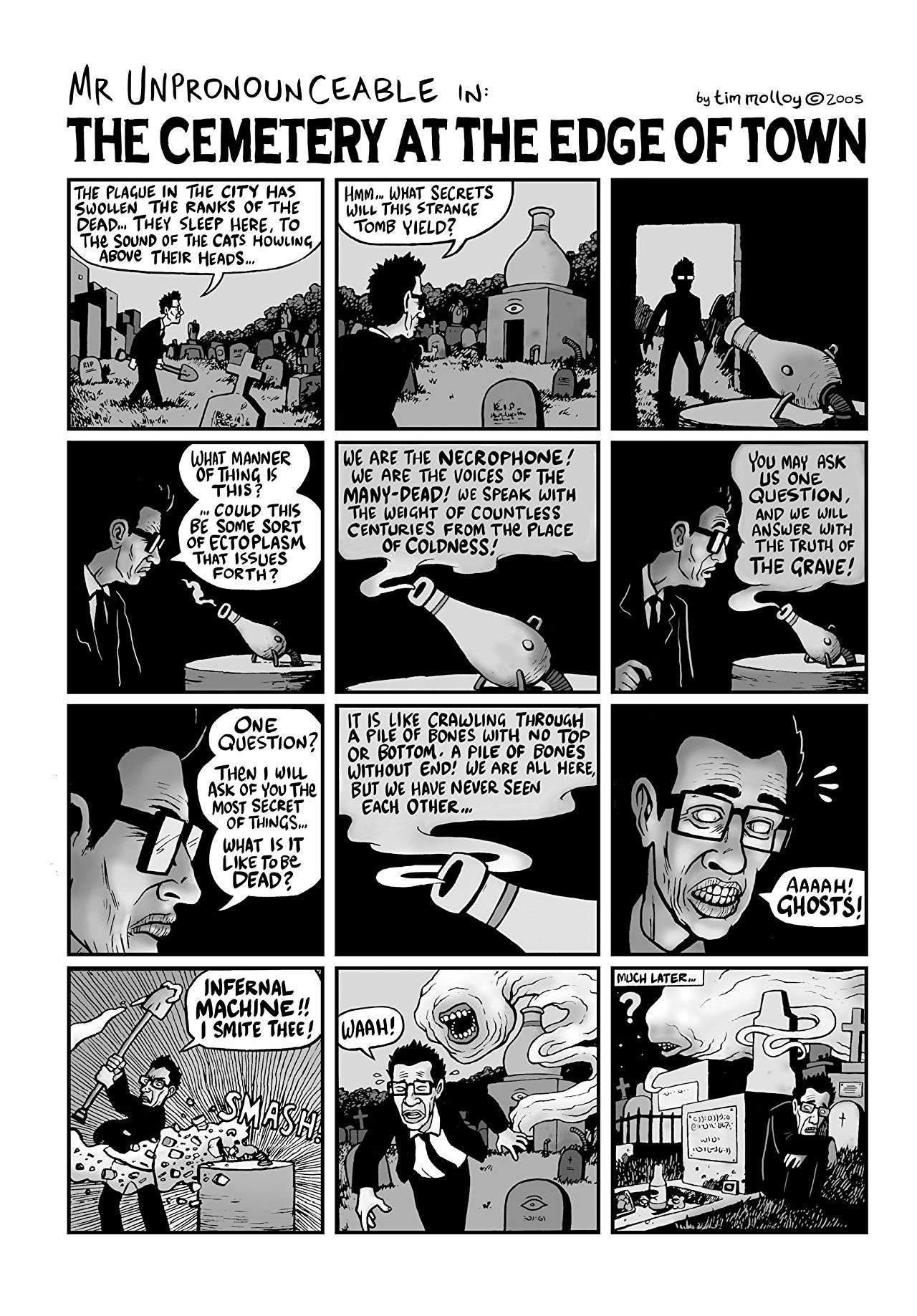 My love of Horror and Science fiction books and movies, and other surreal comics all coalesced into these early stories and formed the basis for what I went on to do in later years. Body horror, slapstick comedy, tentacles, black magic and rambling nonsense rolled out of me. Mr Unpronounceable writes himself alot of the time, and it feels like I'm just along for the ride. By the time I'd moved to Australia I thought I might be done with Mr Unpronounceable, but that wasn't to be the case.
I was approached by James Andre, who had recently begun publishing as Milk Shadow Books
He wanted to put out my Mr Unpronounceable Strips in Australia. I had never been approached by a publisher before, so I was very flattered! We decided that first, he'd publish a collection of my silent comics that I called It Shines and Shakes and Laughs.
In the meantime I would see if I could pad out the 50 or so pages I had under my belt to a respectable 80 pages.
To my great surprise and delight, Mr Unpronounceable came back with a vengeance and I ended up with more than 200 pages in total that all ended up being collected in Mr Unpronounceable Adventures. 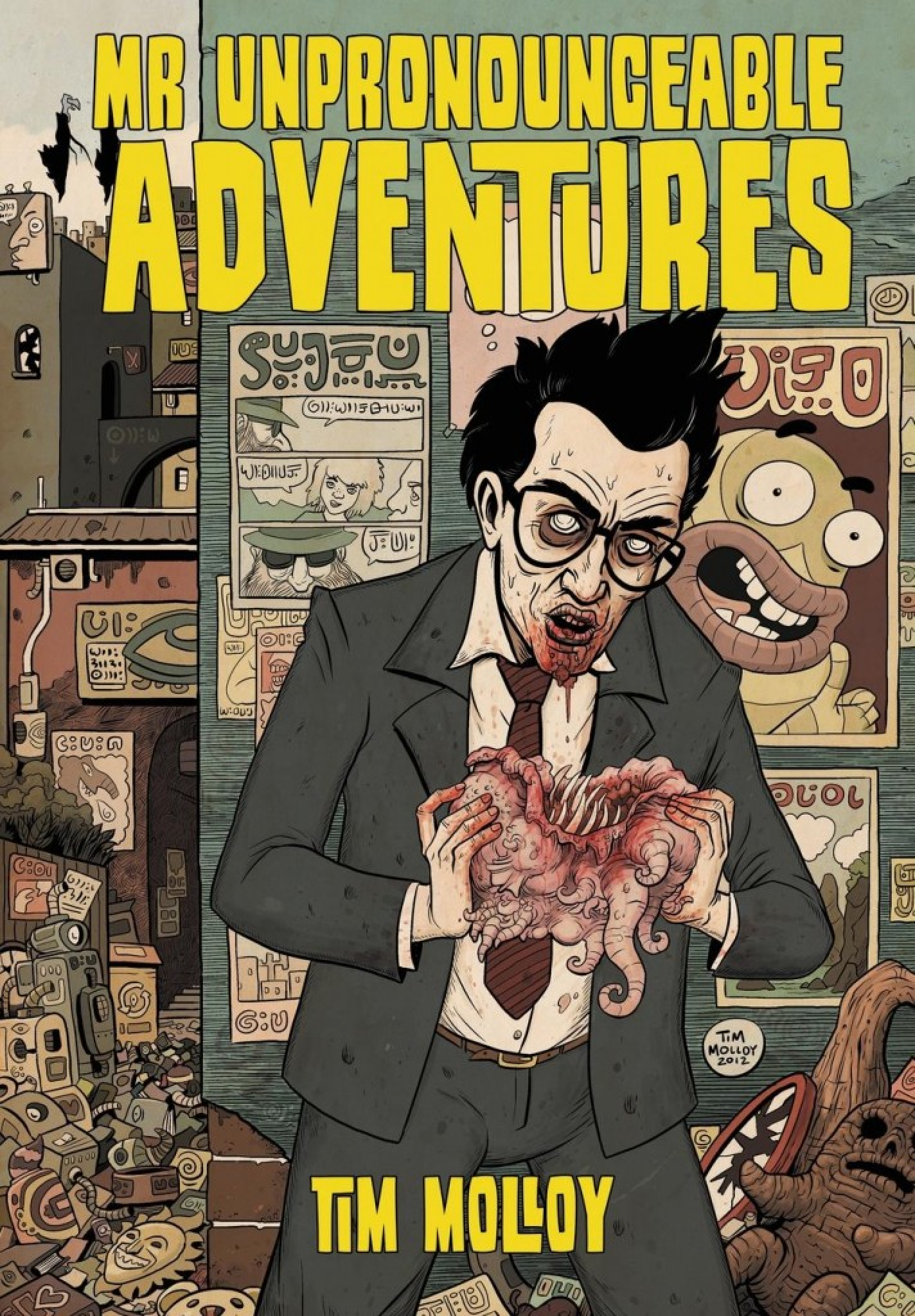 I dived back into the old stuff for inspiration too, and really began forming the tangled web of interweaving storylines that create the groaning, cohesive anti-narrative that ties this book and the following two volumes together.
I redrew pages that needed redrawing, and I found ways to connect new narrative strands to old material. 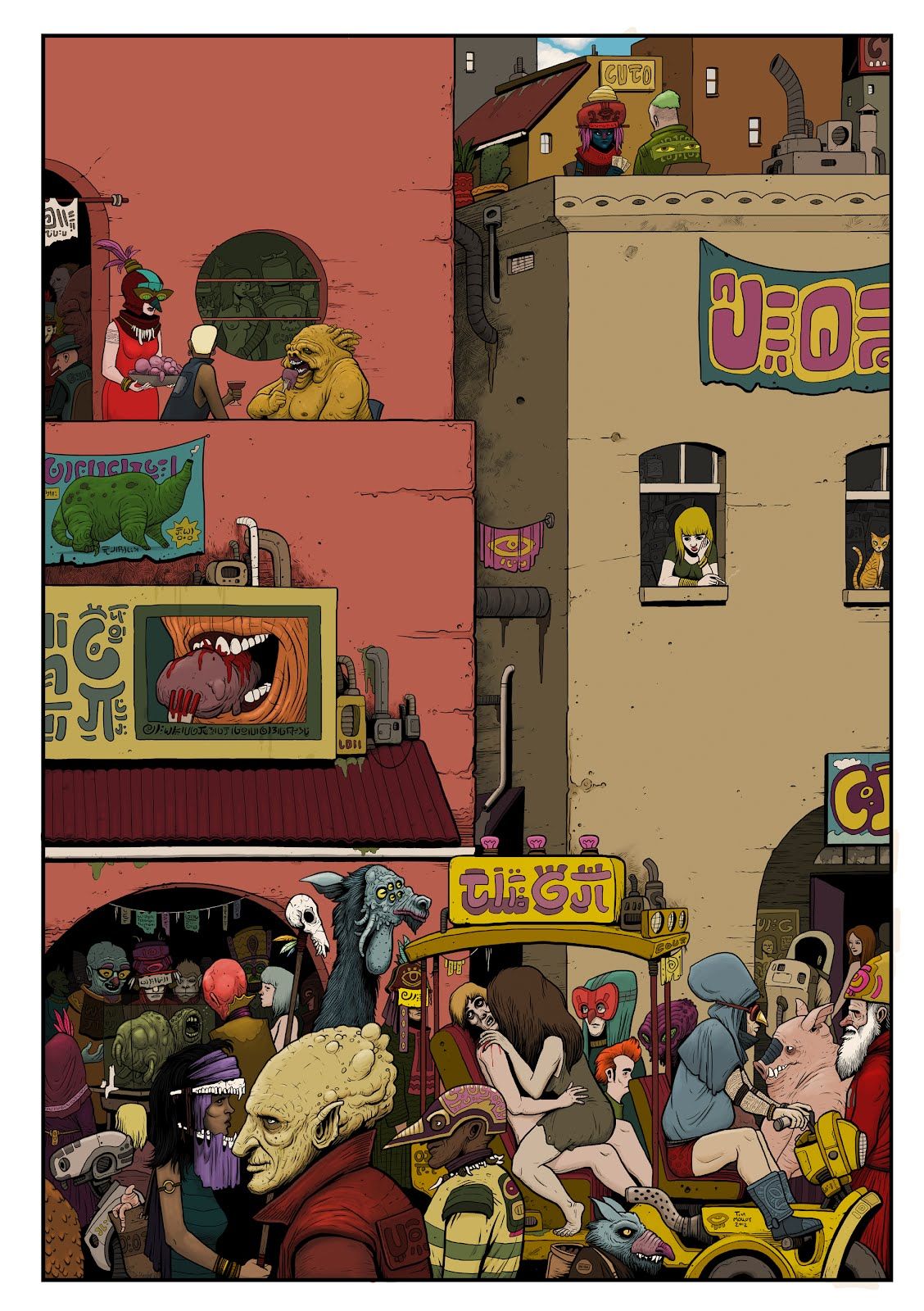 Most of the action takes place in The City Of The Ever Open Eye, a Dream City in an 'Uncharted Dimension in The Sub-Ethereal Heirarchy'. Ruled over by an inscrutable Order of Silent Monks (kind of a combination of an old fashioned knights helmet, a scorched tree and a coarse black sheet) it's teeming and endless streets crawl with strange citizens and even stranger visitors washed up from dreams in an Infinity of Universes. 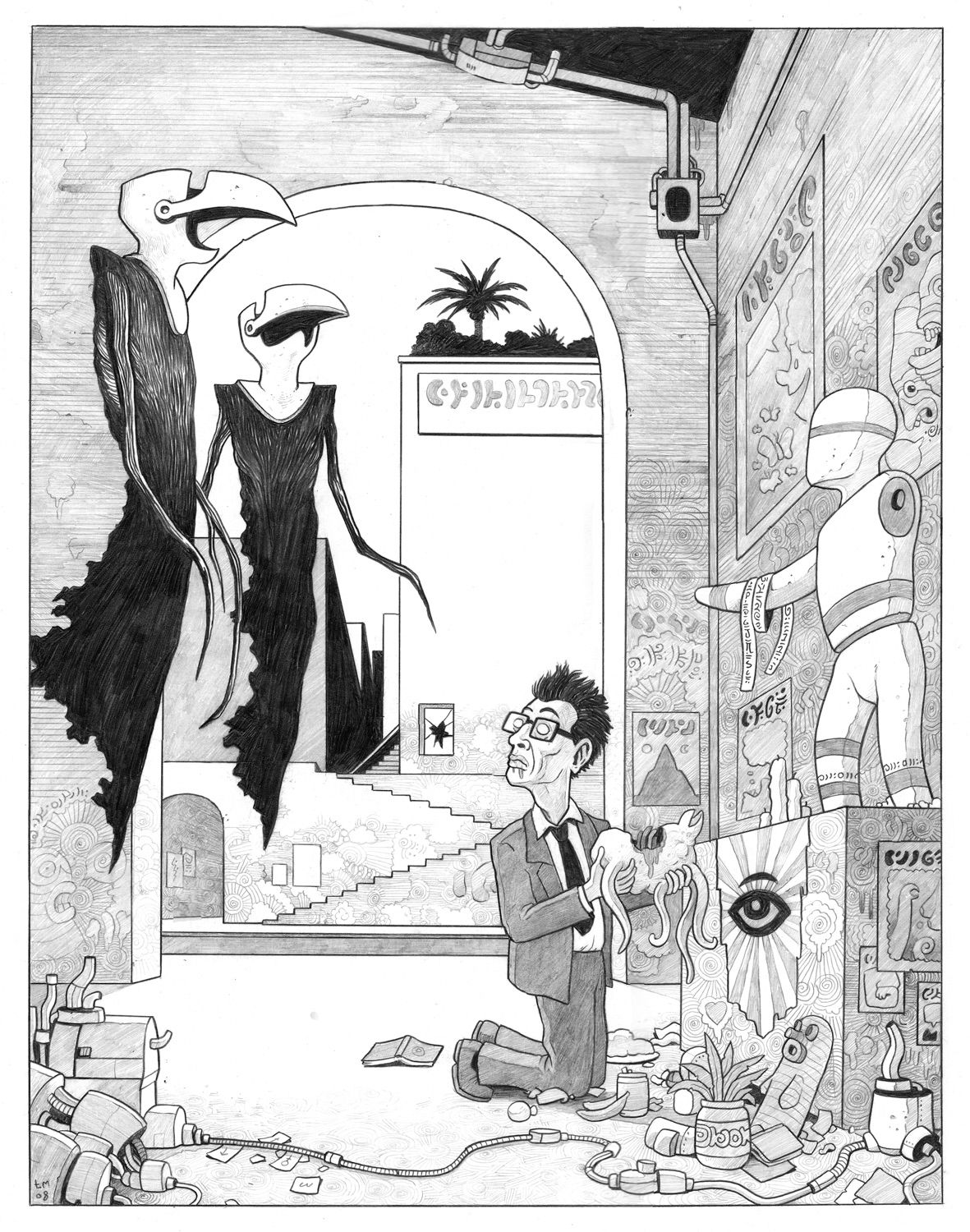 The stories take place across multiple timelines in multiple dimensions, with an infinitude of Mr Unpronounceables.
Mr Unpronounceable often meets his fate at the hands of a Doppelganger, many of whom are robots. 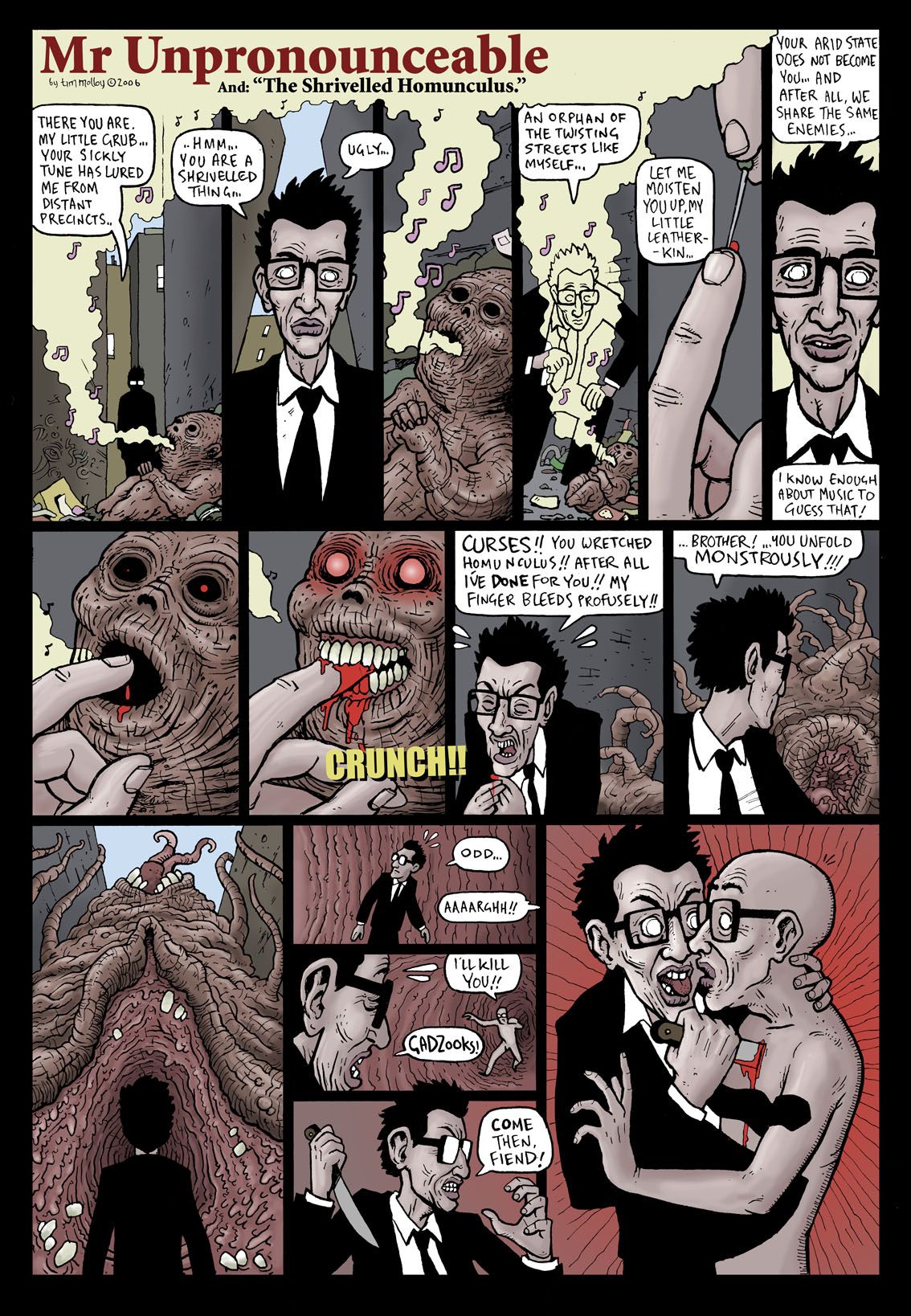 Not all these 'selves' are the same. Their actions and thought depends on how long they've existed and what parts of their bodies and souls they've had to lose in order to achieve mastery over whatever Occult Mysteries they've decided to pursue. 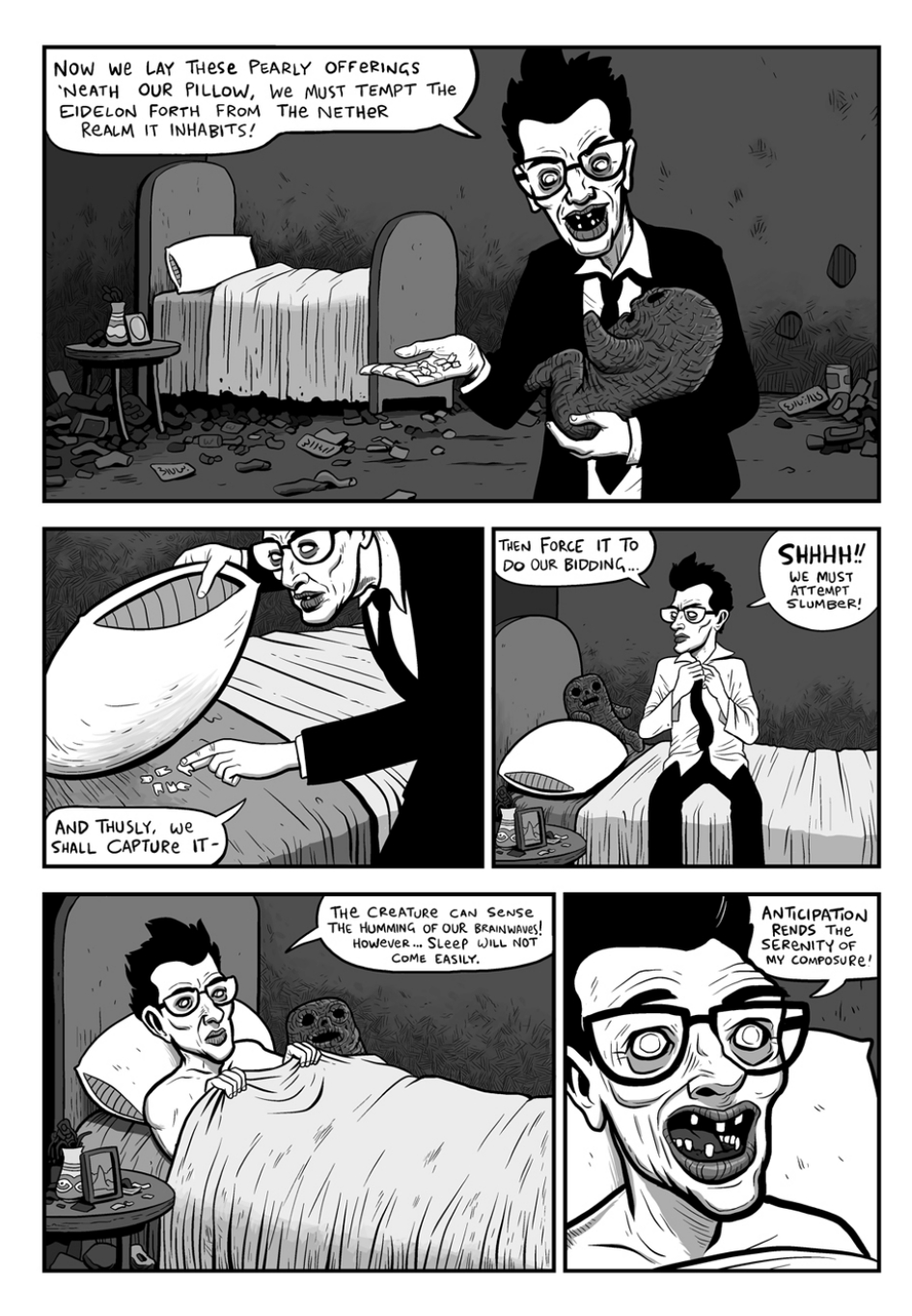 Did I mention there are tentacles?

Well, the hour is getting late, and the lack of a draft function has actually meant that I've finished this in one sitting, for better or worse! I hope that this was interesting and if it was, please upvote, resteem, follow etc.
Also, please stay tuned for part 2, where I will tackle Mr Unpronounceable and the Sect of the Bleeding Eye, as well as Infinity of Nightmares, and explore some of the themes and dig a little deeper into the ideas and influences that went into the making of the next two volumes of Mr Unpronounceable's Adventures.

If you would like to own copies of my books you can buy direct from Milk Shadow Books,or you can visit the Beinart Gallery Bookshop or even get them on Book Depository!

Beware the Skinless Ones!

wow, your work is humbling! I love seeing how both your character and the style has evolved over the years! and the morbid/whimsical universe that you've created is breeding ground for some top shelf dark humor! 👹 Fan!

What an interesting character Mr Unpronounceable is, and it's great read about some of the inspiration behind this character. So many fascinating details in your drawings too.

Thankyou! I'm glad people seem to be finding some value in the behind the scenes stuff. More coming!

Not sure what I liked more, your amazing art/comics, or reading about the evolution of the character (and supporting cast) and the journey you went on with this art project. I can't wait to see what you dive into next and really hope you share it with us here on Steem as you create it! Much love - Carl

Thanks very much! I've never put all of this down into words before, preferring the work to gibber for itself. I'm glad it's interesting to have a peek behind the mouldy curtain!

This is beyond awesome man. I love it so much!

THERE IS NOTHING BEYOND AWESOME BUT THE VOID. Ha ha. Thanks heaps! Glad you dig it!

These are awesome! funny how he migrated to Australia. I hope I never meet him - far too weird for my liking haha!

My move to Melbourne definitely had an influence on me. We're famous for our labyrinthine alleyways and lanes and I fed all of that into The City Of the Ever Open Eye. No, you never want to meet Mr Unpronounceable!

Yeah we are an hour out of Melbs..
Know it well x

These are really great. I'm definitely going to need them. It looks like Book Depository is the best way to get them in the US?

Definitely the cheapest! I hope you enjoy, and thanks!

Bought all three. Looking forward to reading them and sharing them with my surreal-comic-loving teenage godson.

Aw man, thanks so much! Enjoy!

You fucking know I love yours you beautiful bastard.

This is incredible - what a great post! I am following you now, so glad to run into you here. You mention Helnwein, I know him personally, (am friends with his son Cyril who is also a outstanding photographer). I live in Vienna, and next month they will unveil the covering of a tall insurance building with giant anti-war images by Helnwein: http://www.wst-versicherungsverein.at/en/projects/rtv2018/
I resteemed your post and am looking forward to more from you! Great to see a quality post getting so many upvotes!

Omg how amazing! I don't know if it's appropriate but please send my regards! I like your work too Otto, nice to meet you!

Thank you very much - I found that great source about the Ringturm at the website of the company - the press release is both in German and English, so here I posted it in both languages:
https://steemit.com/art/@thermoplastic/ringturmverhuellung-wrapping-of-the-ringturm-in-vienna-2018-by-gottfried-helnwein

Welcome! Looks great. Right up my alley. There is a small but growing number of comic artists (and comic interested) here. I suppose you can find them via the #comics tag (it was flooded with trash recently, but it seems to have recovered.)

I make a comic that has been running on Steemit since quite early. You can read it here: http://phillfromgchq.co.uk/

You got skills! Interesting work, nice to meet you. Followed!

Wow, this is really nice work, it's dark, weird but funny and it has a lot of character, very personnal and charming. First image is very Moebius like. I couln't read everything right not but I definitely will and follow your profile. Glad to see high quality comics arriving on Steemit!

P.S. I do (sci-fi/surreal, all watercolour) comics too, so feel free to visit my profil, website etc ... ;)

O great! True now that you mentionned it, I did you see you or interactions with you, discovered so many things lately on Steemit, difficult to keep track! Bravo again!

Actually, I should mention that the first image was created for the Heavy Metal 40th Anniversary Group Show at the Copro Gallery in Santa Monica. Moebius (posthumously of course) was also in the show! *dies happy

Wow, that's the kind of consecration I crave a bit for :D
Great!!!!

Aaah, this is a great post, tim ! Love your works so much :>