What Cannabis Does to People (2019 original film)

This is what cannabis does to people, as seen through my street level activism in B.C.! Please enjoy this eclectic grouping of historic moments, a behind-the-scenes glimpse into the Vancouver activism scene, the free ("black") market, bloopers, and other unique footage, much of it never before seen. (It sure is great to finally have options in video streaming platforms.
This is my first production to ever hit FIVE!)

Cannabis legalization in Canada was a lie - just a corporate and government takeover of the market and culture. Peaceful growers, sellers, and users are still being charged and imprisoned because they're not part of the regime of rich connected insiders. That's why we won't stop until we see the end of cannabis prohibition. I'm very pleased to see this doing well and being shared around, both on mainstream and alternative social media! It's powerful when people see real footage and glimpses of what goes on in activism, and the free market. I think it's good to show people we can do it peacefully and safely, without government or corporate interference.

It's great to bring this kind of content to the 3Speak platform. This is the kind of thing that has you and others banned and/or shadowbanned and/or deplatformed from places like YouTube. Good positive vibe <3

Thanks :) We've resteemed this one too.
Some really beautiful glassware shown in this.

the site (3speak) is working well overall... impressed so far... hopefully they continue to upgrade and innovate :))

I wish there was a bit more context, I agree most people when just smoking pot are peaceful, but what exactly is going on with the prohibition of it? Selective government raids like America has in Washington state? Who in the connected and corporate community would you Like to see raided? I'll buy some of their stock and it'll be tanked in a few days 🤔

Thanks for your comment :)
I have years of video footage, and had to condense it down for the length of this video, so thanks for asking questions.
For more background about the activism I was involved in, I have a 20 minute short documentary here. It shows how Canada's "legalization" impacted the free market and existing culture here. 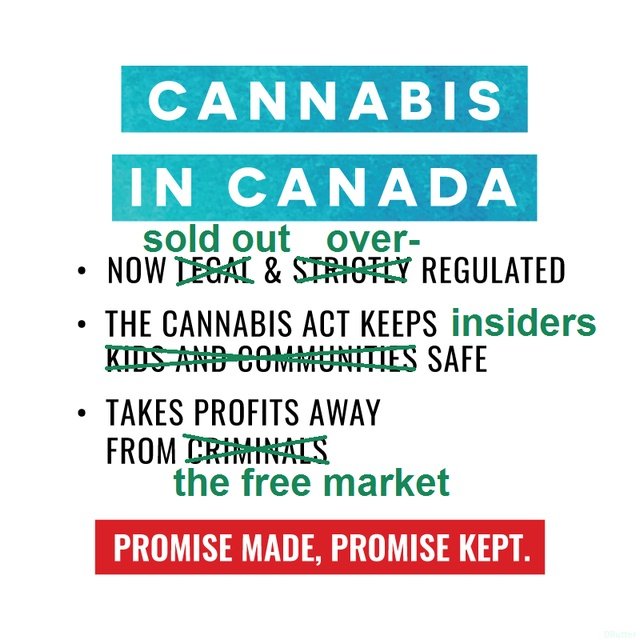 I fixed their "mission accomplished" announcement for them ;)

You asked who in the corporate community would like to see peaceful small cannabis growers and sellers raided. The answer is a trio: the government (and those connected like the court system and prison system), law enforcement (more than 50% of their budget is the 'war on drugs'), and private insiders/investors (who often end up being government or ex-government officials who made a living on prohibition for decades). Now they want to grow it and sell it to us, and put anyone outside that regime into prison. Corporations (the licensed producers, or LPs) are lobbying government, demanding they put the "black market out of business". In other words, they are paying thugs to shut down their competition in a "legal" way. It's not right, but they've made it law, and it's happening. Now in Vancouver, the dispensaries which have paved the way for legalization, and fought against prohibition for years, many of them suffering huge losses and going to prison to make it happen.... they're all being shut down. A few "legalized" dispensaries, owned by rich insiders, are popping up. Their cannabis is very low quality, in massive amounts of plastic packaging, covered in warnings and bright labels. It was grown with 93 approved chemical sprays (some of which cause harm when burned, as in with cannabis use). It is irradiated to remove bacteria (which burns off the trichome heads, reduces terpenes, and stops the curing process, resulting in weed that smells like hay and burns harsh in your throat). They're even talking about coating it with invisible nanoprobes that only scanners can detect, to stop the "black market" cannabis from entering the legal system. Truth is, the black market is where the good prices are, and where the good quality is, and where the selection is. The legal regime still doesn't allow edibles or extracts, and when they finally do, the dose will be 2.5mg, with a max of 10mg per package. Not even 100mg is enough for a single dose for me, and for my wife @MediKatie, who uses it to fight off cancer in her spine and organs. So the legal regime is meant to fail. The black market is supposed to live on, and thrive. That's how they justify more police, more budgets, more prisons, and new laws such as warrantless searches of ourselves and our property and our belongings. If the state suspects we have "illegal" cannabis, we can be raided, jailed, all our property seized, and more. 14 years in prison for most offenses. And a snitch line, so people can rat on their fellow citizens for "cannabis crimes". LOL @ keeps insiders safe, especially when you cross out "kids" to write it, ahh perfect! :D

@drutter, In my opinion one thing is clear and that is in Centralisation everything sounds clear but the system is so complex and most of the time influential individuals and organisations dominate the market.

This post earned a total payout of 39.911$ and 30.008$ worth of author reward which was liquified using @likwid. To learn more.