What Are “Assad Apologists”? Are They Like Those “Saddam Apologists” Of 2002? 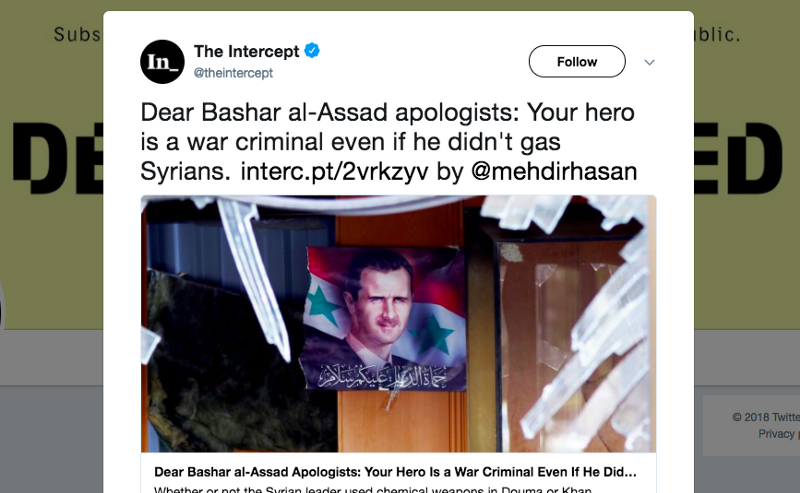 Isn't it fascinating how western journalists are suddenly rallying to attack the dangerous awful and horrifying epidemic of "Assad apologists" just as the western empire ramps up its longstanding regime change agenda against the Syrian government? Kinda sorta exactly the same way they began spontaneously warning the world about "Saddam apologists" around the time of the Iraq invasion?

The increasingly pro-establishment Intercept has published an article titled "Dear Bashar al-Assad Apologists: Your Hero Is a War Criminal Even If He Didn’t Gas Syrians," condemning unnamed opponents of western interventionism in Syria for not being sufficiently condemnatory of Bashar al-Assad in their antiwar discourse. I first encountered the word "apologetics" as a young Catholic girl in a parochial school, where the term was introduced to me as the religious practice of defending Church doctrine using discourse and argumentation. I did not become familiar with the related secular term "apologia" until much later, which is defined as "a work written as an explanation or justification of one's motives, convictions, or acts."

It wasn't a term I ever made use of or encountered much in day to day life until I started writing extensively about the dangerous warmongering behaviors I was seeing in my country's allies last year, when all of a sudden it became a part of my daily life. For me, I was just trying to help prevent the western empire from decimating yet another Middle Eastern country in yet another war based on lies and avoid dangerous escalations that could lead to nuclear holocaust, but to countless strangers on the internet I am an "Assad apologist" and a "Putin apologist".

People have been calling me these things every single day for well over a year now. The internet is weird, man. 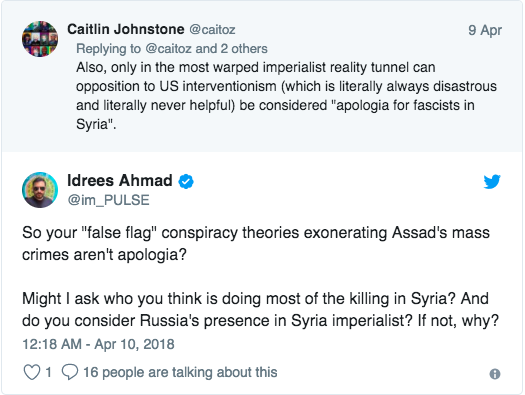 And surprise surprise, now that the war drum is beating louder than ever for Syrian blood, the phrase "Assad apologists" is enjoying a massive uptick.

The argument as I understand it is that people like Professors Tim Hayward and Piers Robinson, the subjects of the aforementioned Times and Huffpo articles, are not protesting the latest warmongering agenda of a multinational power establishment with an extensive history of decimating Middle Eastern countries, but are in fact going out of their way to justify Bashar al-Assad's motives, convictions, and acts. Not because they oppose death and destruction like normal human beings, but because they are just positively head-over-heels gaga over some random Middle Eastern leader for some reason.

And that's always how these arguments go. By pointing out that the US-centralized empire has been plotting regime change in Syria literally for generations, I'm not opposing dangerous regime change interventionism, I'm defending a dictator. By noting that the western empire has an extensive history of using lies, propaganda and false flags to manufacture support for military aggression, I'm not stating a well-documented and frequently admitted fact, I'm performing apologia on behalf of a despotic regime.

It can't possibly be because I am aware that the neoconservatives who have been braying for this attack for years are always completely wrong about everything. It can't possibly be because the US-centralized war machine has had a well-established pattern for many years of demolishing countries based on lies and false pretenses of humanitarianism only to leave in their wake a humanitarian disaster, which they then blame on "mistakes" made by whoever happened to be in charge at the time. It can't possibly be because US-led military interventionism in modern times is literally never helpful, literally never accomplishes what its proponents claim it will accomplish, and is literally always extremely profitable for its most vocal advocates.

Nope, it's got to be because I fell in love with a gangly Syrian president whom I'd never even thought about before the neocons set their crosshairs on him, and I only oppose the next imminent military catastrophe because I agree so much with his policies and behavior. Even more annoying than the honest regime change proponents are people like Mehdi Hasan, author of the aforementioned Intercept piece, who claim to oppose US regime change but find themselves tone policing the antiwar left instead. The world is full of problems, the greatest arguably being a third world war and potential nuclear confrontation between Russia and America ensuing from US interventionism in Syria, but men like Hasan choose to focus their creative energy on making sure the antiwar left mitigates its speech sufficiently and prefaces every antiwar argument with "Assad is a bloodthirsty evil dictator, but".

Like that's what the world desperately needs right now: for the antiwar left to be even more mitigated in its speech than it already is. For us to slam on the brakes of our antiwar surge to check one another to make sure we're all being explicitly anti-Assad enough.

These writers never make it clear exactly why it's so important for everyone in the antiwar movement to be checked and scrutinized for excessive enthusiasm about the Syrian government. Are they worried they'll go and join the Syrian Arab Army? That they'll install Assad as president of the United States? How is sympathy toward the Syrian government a threat to anything other than the manufacturing of support for more escalations in US-led interventionism?

We don't need equivocation and tone policing right now. What we need is a loud and unequivocal NO to western military interventionism in the country immediately adjacent to the one we raped fifteen years ago. 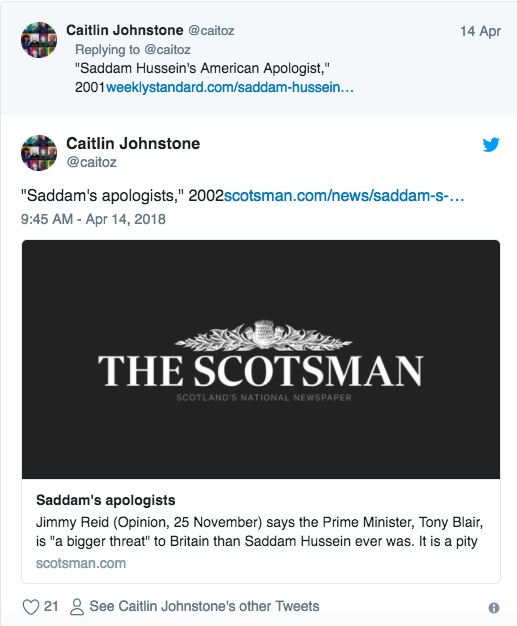 We've been here before. Here's an article from 2001 titled "Saddam Hussein's American Apologist". Here's one from 2002 titled "Saddam's apologists". Here's another from 2003 titled "After Saddam's Capture: Will His Apologists Now Recant?" Here's yet another from 2003 titled "Armchair generals, or Saddam's leftwing allies". Here's one from 2005 titled "Parliament's damning report about Saddam apologist George Galloway." This was an extremely common smear against opponents of the Iraq invasion, who were of course later proven to have been 100 percent correct in every way.

Iraq is as relevant as relevant gets to this debate, and anyone who claims otherwise is only doing so because they know Iraq is devastating to their Syria arguments. They're pulling the same damn tricks in the same damn way, in some cases with the same damn people. These "We must stop the Assad apologists!" op-eds are coming out with increasing frequency and urgency because they are losing control of the Syria narrative and they are running out of tricks. Don't let their authoritative way of speaking fool you; they are not nearly as confident as they pretend to be.

Dear White Helmet's Apologists: Your Hero's are War Criminals and Did Gas Syrians. You even honoured them with awards. 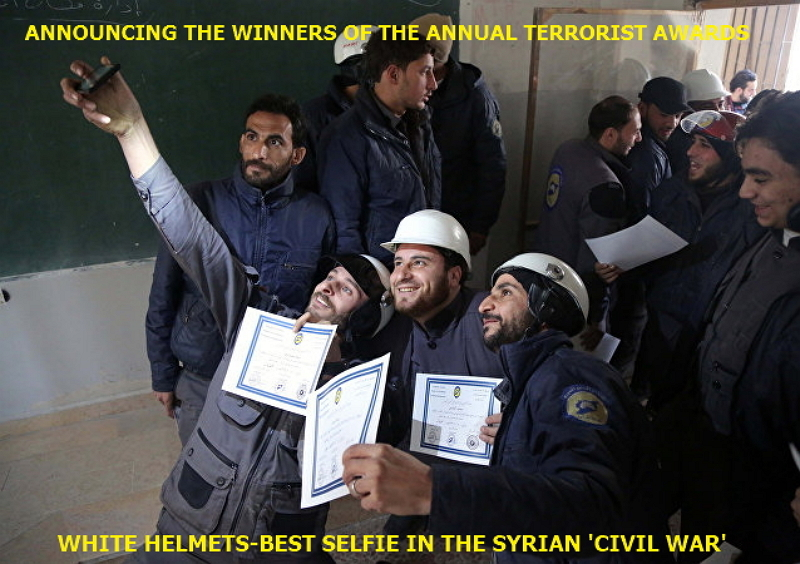 Have the War Hawk Governments, their Military Industry Masters and Media Mouthpieces overestimated the level of fluoride in our water supply? I started writing that sentence tongue-in-cheek, but finished it believing it could well hold some truth. And that is a sign of just how far we’ve allowed ourselves to be driven down this preposterous path of propaganda.

If you’re not fully on-board for SIDE A then you must be on-board for SIDE B, and vice versa. WTF happened to the good old SIDELINE, the place where the majority used to stand, observing, thinking critically, and commenting as and when events began to unfold? If we stand there now, and do what the media were always supposed to do, we're castigated for doing the right thing.

Because we vociferously believe Assad to be Not Guilty in respect to Charge A, for those mentioned above to conclude that we therefore must believe him innocent on Charges B to Z, is the perfect example of a logical fallacy.

What interesting times we do enjoy!

I could not agree more. I was truly confused by that intercept article and did a triple take to make sure it was from that publication. I did not realize, until now, that turn in the intercepts opinion articles.

As you say the parrallels are obvious , we have been this path before.
Iran is the main target This interview with Gwyneth Todd is very interesting and also the Movie Fair Game, with the recently pardoned Libby Scooter in a staring role all should be taken on board as further examples of what is afoot.
http://www.wetube.io/video/mendacity-and-duplicity-soldiers-of-war-truth-the-first-casualty-fairgame-wmds/

As you say the parrallels are obvious , we have been this path before.
Iran is the main target This interview with Gwyneth Todd is very interesting and also the Movie Fair Game, with the recently pardoned Libby Scooter in a staring role all should be taken on board as further examples of what is afoot.
https://longhairedmusings.wordpress.com/2019/03/12/the-military-industrial-complex-and-brexit-a-hypothesis-eumilitaryunification-brexit-brino-jocox-annalindh-olofpalme-tina/comment-page-1/#comment-1358

I deeply appreciate your dedication to presenting the truth. And no doubt you are making a difference. More and more people are waking up. Perhaps one day there will be enough to make the changes necessary to break out of bondage to the Global Elite who are our masters. I mean, it is possible, though (I sigh when I say this) improbable. History tells us that the masses will march off to war. All they need is a little flag waving, some lies from their masters and away they go.

I'd like to know if, other than presenting great information, you have any other solutions or visions how we might create a different future... one without our Masters domination over us.

You may want to take a look at the series I'm writing, "The Roots of War, the Hope of Peace". I'll be addressing these issues.

Blessings upon you and your work. Perhaps a critical mass will be reached and we can cast the beasts off before it is too late. Perhaps...In the meantime I admire your determination.

I think it's obvious that Iraq suddenly becomes irrelevant and relevant when the media wants. I'm from Iraq, and I'm not bringing this up to bring an argument from authority, but simply to show I am from that area. Double standards are everywhere, and at this point my standards are so low I'd respect a stupid opinion if it was at least consistent. If Bashar is to be seen that horrible then it's obviously forgotten who gave him the excuse, Arming militias with weapons, honestly what was the result supposed to be other than civil war? Like am I stupid for not being able to think of another reason? The best scenario I can think off is avoid the entire white helmet argument and all the facts and just say that they are (A whole group of the best universities graduates) stupid.

Mehsi Hasan is an Islamist apologist, so it's no shock he would be against a secular leader