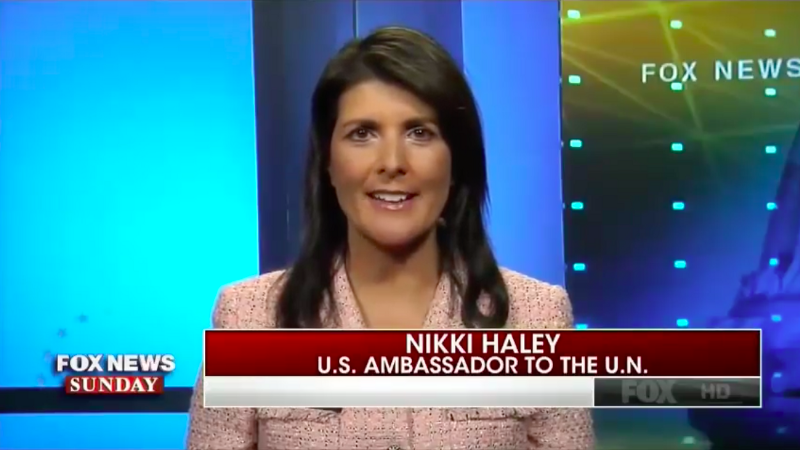 One year ago, the Trump administration transgressed establishment Washington orthodoxy by asserting that it was no longer pursuing regime change in Syria as a priority. Days later, there were contested reports of a sarin gas attack in Idlib province which killed dozens of civilians. This was immediately responded to by a missile strike on a Syrian airbase without any investigation. After the strike, UN Ambassador Nikki Haley was trotted out, saying that removal of Assad had just become a US priority.

Flash forward to this year.

Two weeks ago, Trump was openly talking about wanting to get US troops out of Syria "like, very soon," as soon as 48 hours by some reports. As we all know, this was followed by another disputed report of a chemical attack on civilians, which was followed by another military strike on the Syrian government. And, just today, none other than Nikki Haley was trotted out to inform us that US troops will be staying in Syria for the foreseeable future.

Haley told Fox News Sunday's Chris Wallace that there are now three criteria that need to be met before military withdrawal will even be considered:

Here is a the full transcript of Haley's interaction with Wallace on the subject:

WALLACE: President Trump reportedly wanted to get all 2,000 U.S. troops out within 48 hours and had to be persuaded by folks at the Pentagon to keep them there for a couple of months which raises the question -- what is our goal in Syria? And what is our strategy to get there?

HALEY: Well, I can tell you because I was in the National Security Council meetings with the president when it came to discussing Russia and he had three major goals that he wanted to accomplish.

And so, I think that no, he never thought he would get out in 48 hours. Yes, it is all of our goal to see American troops come home. But we're not going to leave until we know we've accomplished those things.

As near as I can tell, the only way that third goal can be met is if either the US maintains a military presence in Syria, or if Syria and/or Iran cease functioning as sovereign nations and start functioning as compliant parts of the western empire instead. Obviously as long as Syria and Iran are both sovereign and allied they're going to keep conducting themselves as such.

Instead of pressing Haley on this incendiary statement, Wallace changed the subject to Russia like a good little Murdoch stooge, which remained the topic of conversation for the remainder of the interview. And of course it did; all the recent buzz from the US and its allies about Russia, China, North Korea, Iran, Syria and Venezuela can be understood as an empire trying to bully noncompliant nations into joining.

The new imperialism doesn't force the governments it absorbs to change their names or fly a different flag; all it does is demand that its member states align with its interests economically and militarily. The fact that Iran and Syria are refusing to do either is the reason they are being singled out for escalations, and the reason those escalations are being consistently tied back to another noncompliant government in Russia. The mass media narrative factory tries to make it about chemical weapons, about election meddling, about poisoned ex-spies, about humanitarian issues, but it has only ever been about expanding the power and influence of the oligarchs and allied intelligence/defense agencies which run the western empire. All the hostilities that we are seeing are nothing other than an extremely powerful conglomeration of forces poking and prodding noncompliant governments to coerce them into compliance before global power restructures itself into a multipolar world.

Two weeks ago I wrote an article in response to the hopefulness and excitement I was seeing over Trump's comments about withdrawing from Syria. I titled that article "Ignore The Words Of US Presidents. Watch Their Actions Instead." We have now seen the actions, and as usual they paint a very, very different picture from that painted by the words.

All Haley's gibberish about terms that need to be met before troop withdrawal were just noises she made to avoid directly admitting what we now know: the people who rule America have no intention of ever letting Syria go. Or Iran, or Russia. The agenda to conquer the world and unite all nations in slavery via contracts, alliances, treaties and trade agreements marches on. So that means US will be there like forever?????

Well, until World War 3 makes the US have to move.

I think World War 3 started with Syria, but won't blow up until the American invasion of Iran...

Then, America, China and Russia will be at war, no matter how covert and secretive this war may actually be...

"Trade Wars" and "Currency Wars" and all of these are clear signs the fighting began over a decade ago.

But WW3 will go Hot.; there's no real escaping it this time around. This globalized World Order is ripe for a genocidal mass-murder :$

Pray for this not to come true...

Let's all try to really be on our best, most conscious behavior... Our vibrations, actions and the way we fit into the picture of humanity... These all have an impact on the overall way these affairs play out...

There is a War going on for our Minds... If we are thinking, we are winning! Fight with tools xx

Thanks @Caitlin for doing just this :)

I think Russia and China know they can crush the US economy if they play smart,that's why I don't believe in the hot war.Plus pay attention to cryptos and the blockchain technology,the NWO is facing real problems soon.

Maybe now Bolton and the boys at Genie Energy will be able to get drilling in the Golan Heights. What Israel wants, Israel gets ! Nicki has proven an efficient propaganda box for israel and saudi war hawks. 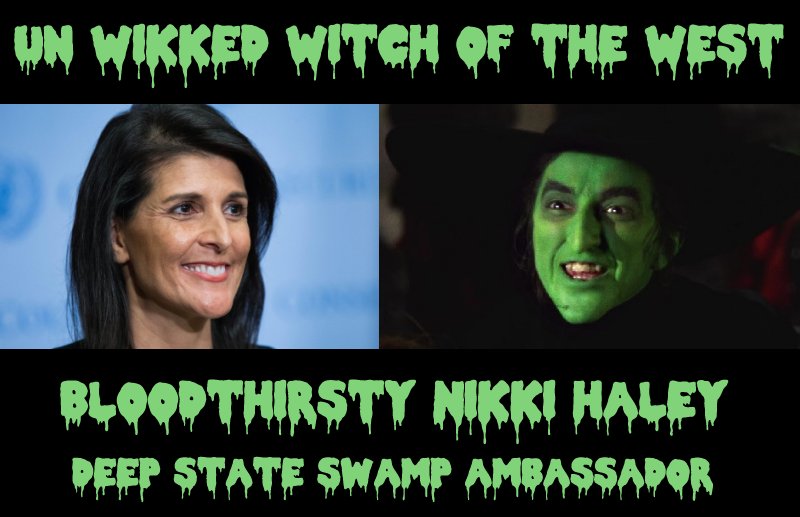 So we illegally invade another country and the whole world,the mass media the UN are just silent about it??Plus how much the military can be stretched? Especially if we finally piss of the arab nations and the whole ME turns against us?(Before you believe the Saudis will always support the US just wait until they turn around and trade oil in petroyuan,they already had some meetings about the possibilities)

Maybe my favorite political one liner was when Nikki told another country 'Bless Your Heart'. One thing about South Carolinians is we are stubborn and will kick you in the teeth if you impose on our rights. I hate politics but love seeing Nikki do her thing.

So let's get this straight....A Syrian citizen came to South Carolina and imposed rules on your life that affected your rights and freedoms directly. As a result this enables you to cheer on a tool of the establishment, as a proud South Carolinian. Ok, gotcha. Was making a point about Nikki Haley more than the political situation on Syria. I could see how you could be upset by that so thanks for sharing your viewpoint.

No problem. I was questioning the conclusion, rather than being upset.

O you're making a point about a Talking Head more than the "situation" the talking head was propagating.

SC can eat my shit if they are as retarded as you. gfky.

Ugh. If we quit feeding this machine, will it die?

Another upvote for you my friend