sunravelme (62)in #sustainability • 2 years ago (edited) 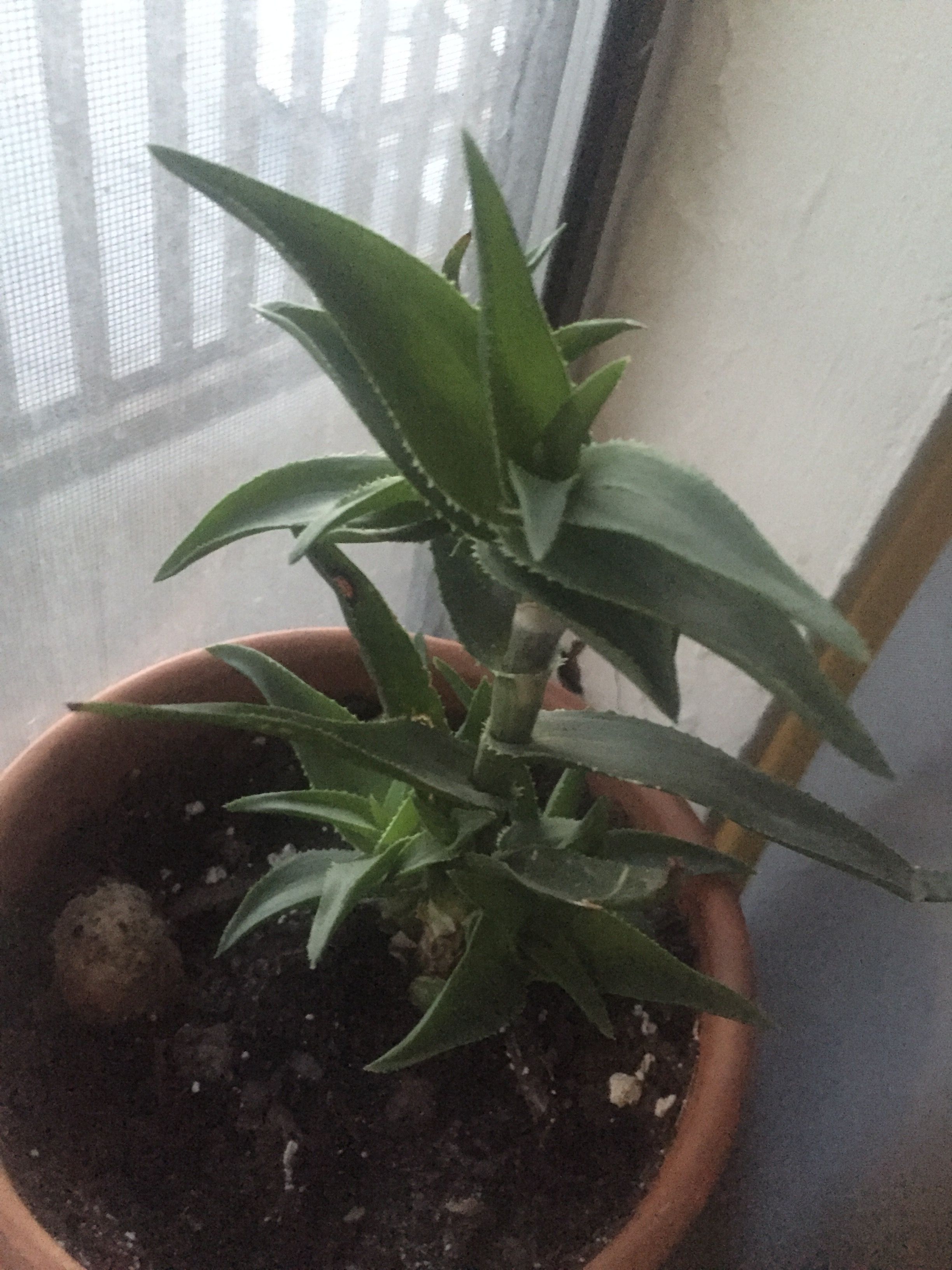 No. Not me. My aloe plant. This is my climbing aloe, Ophelia. I named her that because I am terrible with plants, and much like the character in Hamlet, I knew she was probably going to die but I hoped she wouldn't. And a year later, here she is, having babies! Aloe plants are succulents, so they are used to growing in areas where drought is common. This means they don't seed or flower much- these actions require a lot of water and resources. Instead, they propagate, or clone themselves. In the photo you can see a "pup" or a baby, growing at the very top of the mother plant, off the initial stem.

When I first got Ophelia, I was told that she was supposed to start propagating, but nothing happened- I think it might have been a lack of maturity in the plant, or maybe she didn't have the correct soil. The first time I re-potted her last fall, I used regular plant soil. Then I re-potted her a couple months ago and bought some soil designed for succulents, and chopped her down a little after that, as she was getting tall and twisty from not enough sunlight. Now she's having babies, and the mother plant seems to be struggling under the weight of all of them. The babies seem much plumper and healthier than the leaves of Ophelia. She was also starting to look a little awkward- you know how in the late stages of pregnancy there's a little bit of waddling involved? If Ophelia could walk, she would be waddling. So I cut off a bunch of the babies and researched how to propagate aloe plants. Almost all of the websites talked about how aloe pups shouldn't be removed until they had their own roots- which was weird, because climbing aloe pups don't form roots. After a little more digging, I found out that there are a ton of different types of aloe, and propagating climbing aloe is a little different. This is where I needed some luck. I cut off some of the babies and dug out tin cans to pot them in (since I have a bad habit of getting excited about things and spending a ton of money on them, I decided to make this new venture as cheap as possible). 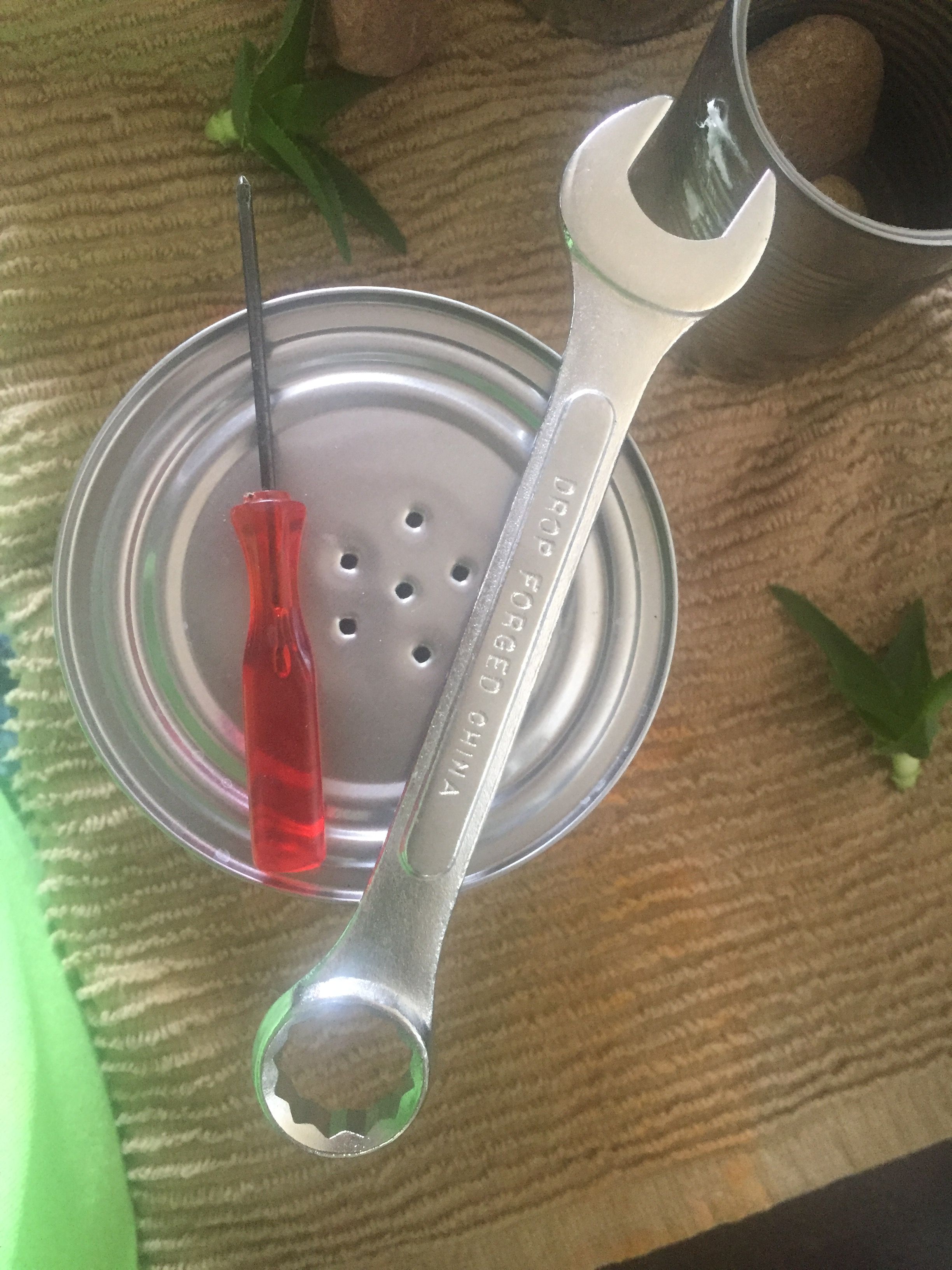 Using a screwdriver and a wrench (I have bought at least 6 different hammers and can never find them when I need them) I poked some holes in the bottom of the can for drainage. Aloe plants do not like having their roots wet- I actually lost part of Ophelia when I went to Europe and had a neighbor watch her, as she got massively over-watered. The rest of her survived though! So now we provide lots of drainage. I had a ton of succulent potting mix left over from the last time I re-potted Ophelia. I also stole some rocks from outside my apartment complex to ensure that there's extra drainage. And so that I didn't have to use quite so much of my potting mix, as it's the only thing I actually paid for in this entire process. 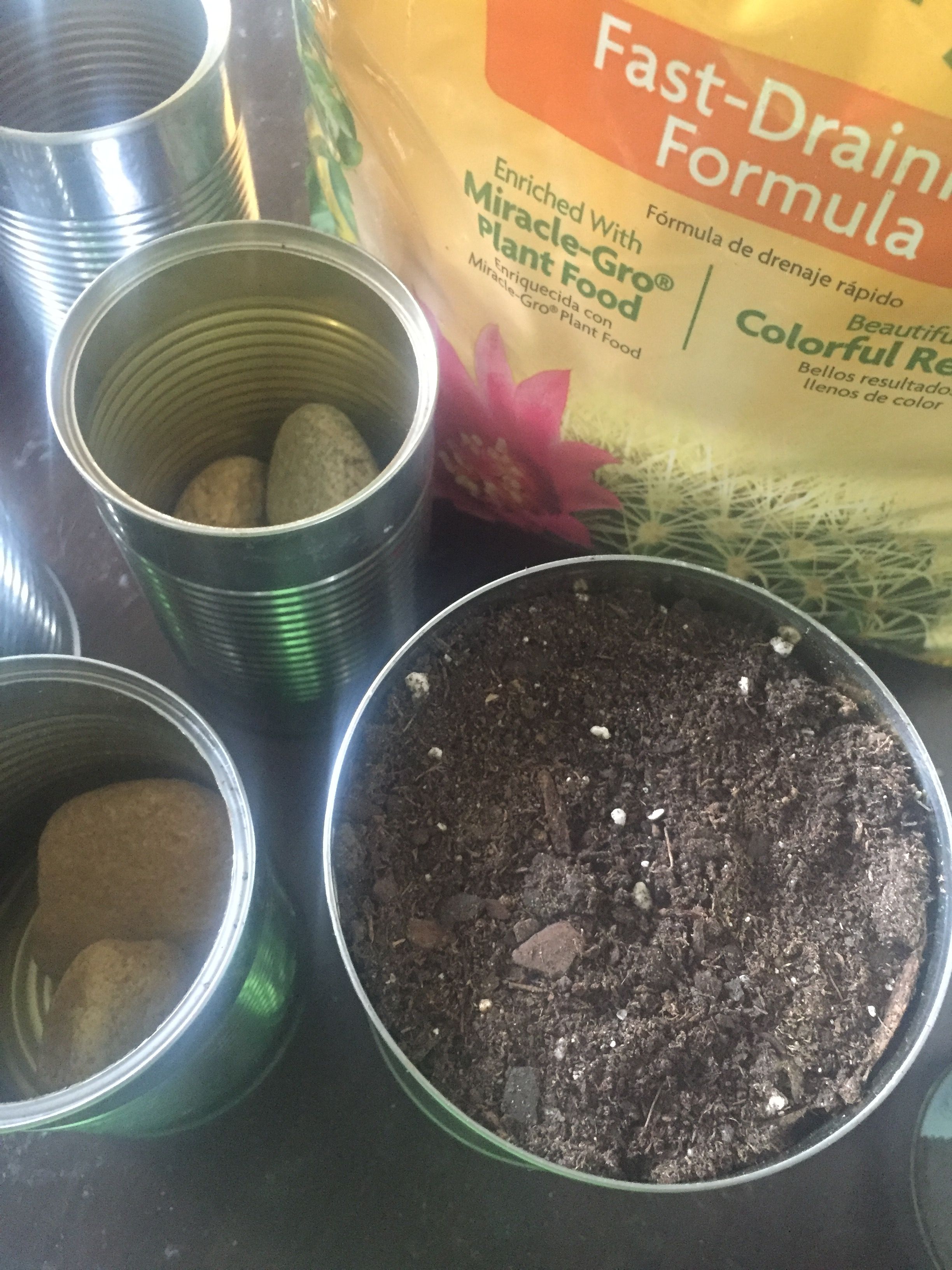 Filled up the cans with the rest of the potting mix. And then plopped the babies in the soil. 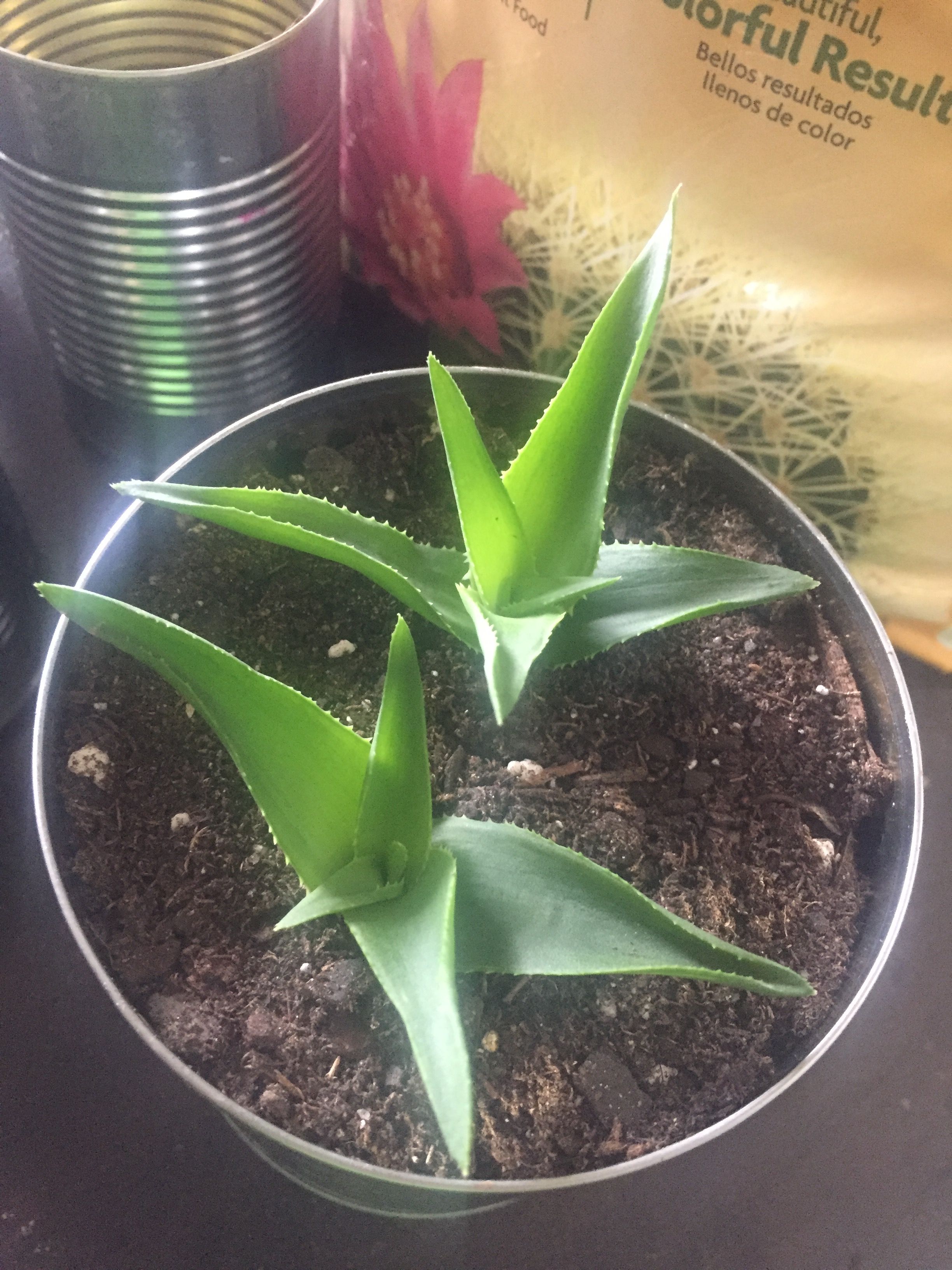 It was at this point that I was starting to doubt myself- could it really be this easy? Do I really just walk away and let them do their thing? The internet said not to water them, so.... I guess I'm not going to water them. Now I have five new pots with five new aloes that I am hoping will grow roots. Plants seem kind of magical to me. And like magic, I'm never quite sure of what the outcome will be. I'm supposed to water them in a week after they've had a chance to grow some roots, and if they have rooted, then I'll decorate the tins with some scrapbook paper and give them away as gifts. Maybe keep a couple if they stay cute, since Ophelia is looking a little scraggly these days (seriously, my plant is a better mother than I am).

I have also discussed being a bad plant mom in my Black and White Challenge Reflection Post if you'd like to hear about my other plant...issues.

Photos and words are property of Sunravelme
#recycle #plants #gardening #life
2 years ago in #sustainability by sunravelme (62)
$14.94
44 votes
Reply 16

Fingers crossed! Even if the majority make it, then I will know that the system for doing it works, and can try again!

You could go into the aloe vera business:)

Good job there @sunravelme. I will give a little bit of water not much, just a bit. I plant lots of succulents. I just planted a new bed at the home where I moved too. 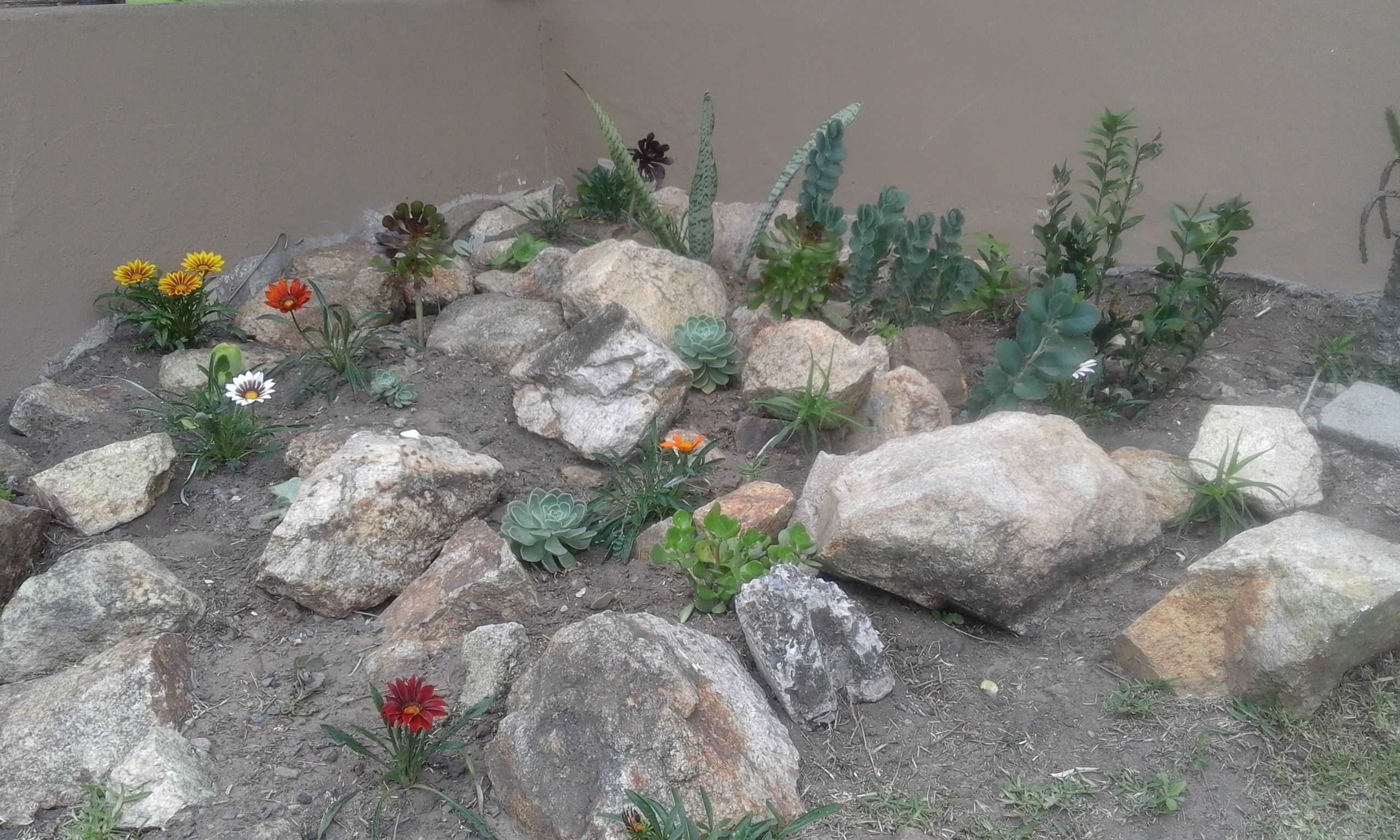 A rockery that I started at my previous home, but sadly we moved and it stayed behind. But I just break off parts and put it in the ground again this side! Yours will all grow well, you did all the right things and they love the sun!

Your garden is beautiful! I had a rock garden when I was growing up- the neighbors teased us about adding rocks to our garden when the soil was already so naturally rocky!

That's awesome @Sauravelme! i never seen an Aloe like this before. Do you use it for anything ?

My house has enough Aloe to last a life time, and i use it almost daily.

I use it for sunburn and occasionally on my skin as a moisturizer. I originally got her because I heard they were easy to grow indoors, and the pot was cute- but she quickly outgrew her pot!

I've never seen a climbing aloe... pretty cool! I also named my aloe (just a regular one). Her name is Patricia. Not sure why, I don't even like that name! Anyway, congratulations.

Sometimes things name themselves! I didn't even realize there were so many different kinds of aloe until I started researching what to do with mine

I know nothing about plants. I've never named a plant--and never assigned gender. In this case, you not only have a plant with personality, you have a family! I got involved in their story. I care what happens to them, and I worry about Ophelia--good narration :)

lol you should worry about Ophelia! I am working hard to keep her alive, as I have a black thumb. But I have managed to keep her alive for a year, so it's looking good so far. Hopefully her babies do well too!

I recently started potting Aloe vera for sale and i am planning to do a special manual on some of the magnificent uses of the plant.

Awesome! Do you have any hints for propagating climbing aloe? Did I do it right? I'd love to see some of the uses of aloe- so far I just use it for skin care.

Congratulations! This post has been upvoted from the communal account, @minnowsupport, by sunravelme☀ from the Minnow Support Project. It's a witness project run by aggroed, ausbitbank, teamsteem, theprophet0, someguy123, neoxian, followbtcnews, and netuoso. The goal is to help Steemit grow by supporting Minnows. Please find us at the Peace, Abundance, and Liberty Network (PALnet) Discord Channel. It's a completely public and open space to all members of the Steemit community who voluntarily choose to be there.

so vary good thanks for @sunravelme