Fleming's rules and its applications in electric motor and electric generator 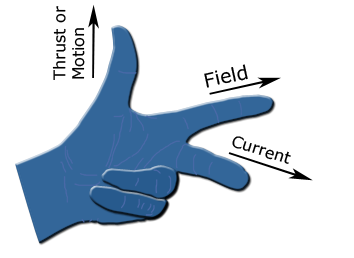 If the magnetic field is applied horizontally to the conductor externally, the field around the conductor as a result of current passed through it and field applied externally are the two magnetic fields that usually interact with each other. It can be noticed that magnetic line of force of external magnetic are from N to S pole.

A torque acts on the coil which rotates it continuously when a rectangular coil is positioned in a magnetic field. The attached shaft rotates when the coil rotates and thus the electric motor is able to do mechanical work. Parts of an electric motor

An insulated copper wire wounded on a soft iron core in a rectangular coil is referred to as a D.C motor. This coil is placed on an exile and together they are put in between the magnet’s cylinder concave poles

Commutator
The direction of current is being reversed by the use of commutator. Commutator is referred to as copper ring which is divided into two parts which are C1 and C2. The split rings are placed on the axle of the motor and are separated from each other through insulation. These rings are soldered to the two ends of the coil and rotate alongside with the coil. The rings of the commutator are connected to the battery. The wires from the battery are connected to the brushes which are in contact with the rings and not to the rings.

In summary, these brushes makes a physical contact with commutator.Therefore, in order to deliver positive and negative charge to the commutator the brushes must connect to the opposite poles of the power source.

Brushes
These are referred to as small stripes of carbon which is presses against two split rings slightly and between the brushes the split rings rotate. These brushes made of carbon are connected to D.C. source.

How to increase the efficiency of a D.C.motor Working Principle of a generator

Electromagnetic induction is applicable in a generator. It works based on the principle that current is induced in the coil when a wire (conductor) is moved in a magnetic field. In a magnetic field between the poles of a horse shoe type magnet, a rectangular coil is made to rotate. As the coil rotates, it passes through the lines of the magnetic force through which a current is produced in a generator. Various electrical appliances are being run by the generated current.

The constituent of a simple electric generator is a rectangular coil ABCD which between the poles of N and S of a strong horse shoe type magnet can be rotated rapidly. A large number of turns of insulated copper wire make up the generator coil. Copper half ring R1 is connected to one end of the coil and copper half ring R2 is connected to the other end of the coil. The two half rings R1 and R2 touch the two copper brushes B1 and B2 respectively when the coil is rotated.

So through the commutator half rings and into the carbon brushes, the current produced in the rotating coil can be taped out. Therefore, current can be supplied into various appliances from the carbon brushes B1 and B2.

Detailed Principle of a working generator

The two commutator rings R1 and R2 change their contact automatically from one carbon brush to another when sides of the coil interchange their positions. As a result of this change, the current keeps flowing in the same direction. Therefore, current is being supplied by a DC generator in only one direction.

In summary, both the Fleming's left and right hand rule work hand in hand.Therefore, there is no electric motor without electric generator and vice versa. Thanks for reading

Thank you for your contribution and posting your references!