Lawrence Forsely (formerly of SPAWAR) working with team at NASA, find beta and alpha activity in samples of Deuterated Polyethylene and Deuterated Titanium after exposure to X-rays in range of those observed in MFMPs “Signal” 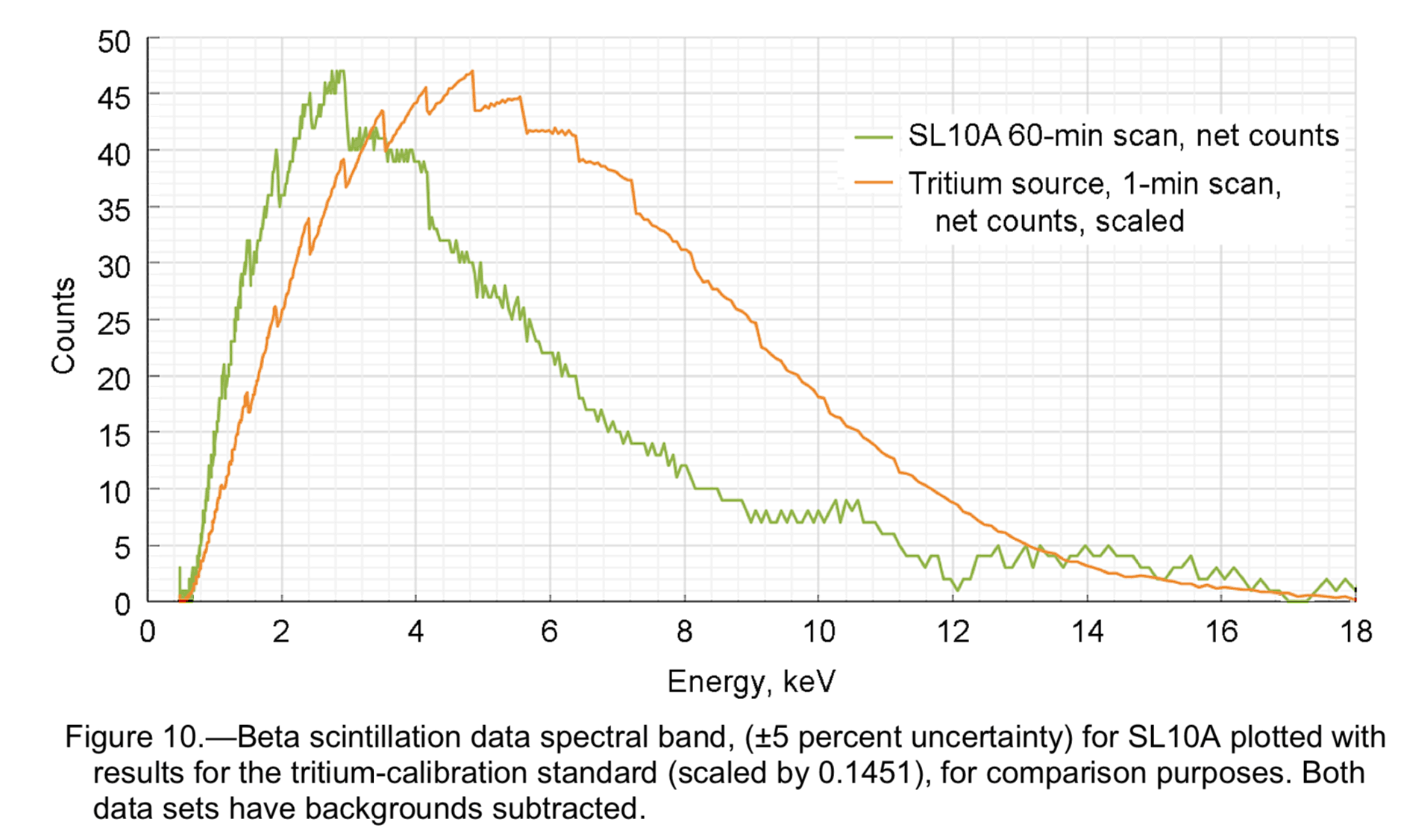 Neutrons observed in other studies with different elements. 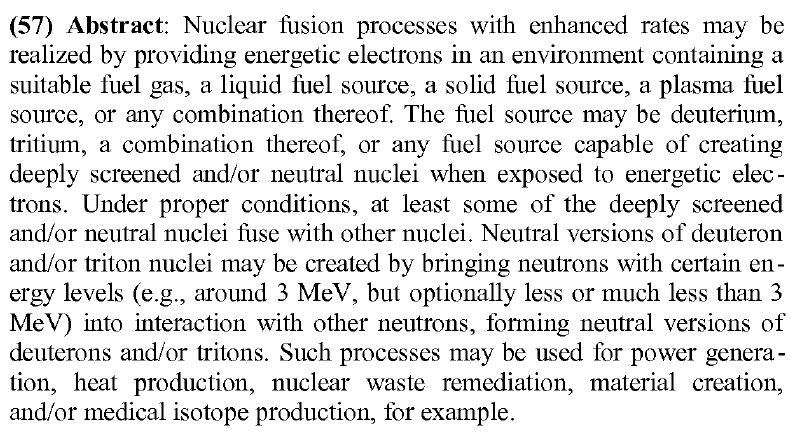 This very thorough set of NASA studies, which show strong evidence that Low Energy Nuclear Reactions are real, have resulted in a patent being published on 14th September 2017 (Priority 9th March 2016), within 6 weeks of our "Signal" observation on 2nd February 2016

In our case with 'Signal' the very curious thing is that in GS5.2 we obviously do not have a LINAC in there, at least not in the traditional sense. It is just a Rossi patent fuel mix in a GlowStick. Also, we had no characteristic x-rays, meaning that our photons were not coming from one strike target, like Tungsen.

People formerly from the French Nuclear Authority immediately recognised our 'Signal' as equivalent to what you would see after a large beta burst.

ie a wide array of electron energies leading to a broad band of photons.

So Rossi fuel, leading to broad band of electron energies and photons and Nasa saying that transmutations / LENR occurs with energies of photons in the range produced.

This anomalous lighting could possibly be something like Cathode Luminescence which is due to electron beams. Hence me356 observing LENR excess heat when the anomalous glowing is happening (due to stimulated emission of electrons from the CC) and this would also explain reports from Rossi's Lugano reactor that the inside was glowing through the heater coils. Iron oxide, possibly on the surface, being a semi-conductor is a good candidate for being stimulated in this way.

Why does radiation appear when the LENR reaction is shutting down?

One hypothesis is that if the (Charge Cluster) CCs or other active sub unit break down, there is an uncontrolled explosion leading to a wide range of beta particle energies that lead to a wide range of photon energies - effectively an EMP. This could explain

So, if a LENR reaction is shutting down, whatever stabilises the CCs, ceases to stabilise them and that causes a burst of activity. The activity is all beta, light, x-rays and gamma assuming the CCs were not in the middle of some nuclear reorganisation that would leave a few unstable nuclei - this might lead to neutron emissions.

So the trick would be to use specific EM waves to stimulate the desired transmutations / nuclear re-organisation, light, heat and electric output without breaking down the CCs in an uncontrolled way. Shoulders, as detailed in the report commissioned late 2001, said that electron energies are released from the CC based on applied EM waves.

In this report, Bob Greenyer found that following replication of Hutchison's effect in US, several professors told him that the various effects (propulsion, teleportation, liquification, transmutation, disintegration, transparency, glowing, plasmatic effects etc.) are triggered at frequencies of light between 22 and 24cm, these are Microwave frequencies. Which just so happens to be the frequency used for remote viewing...(of which Hal Puthoff is the king and could explain spoon bending etc.) and also - quite interestingly remote viewing as used in realtime head mounted displays for RC drone use.

A last point that may be relevant, me356 is an expert with this kind of equipment - could that be why he found it easier to get the 'glowing without extra heat effect' which he notes is when excess heat also emerges.

The lighting may not be anomalous. NASA says LENR occurs because they see transmutations and excess heat. Consider this. If you spin the earth around faster you can spend a whole sunny day at the beach and not get a tan or burn. Now slow it back down to normal. After a day at the beach you look like a lobster. Did you really generate excess heat by slowing the earth down? Of course not silly! According to the symptoms: red skin, blisters, etc. one would think that is proof. How can we stabilize the situation? SPF 50 sunscreen or an umbrella. Stay out for 1 hour no more. What I want to know is how exactly does one alter the period of orbit of a hydrogen atom? Supposedly Brilliant Light Power does that to produce light.

Thanks to all for sharing, missed you all. ;-)

The connection between space and energy can easily be identified and explained by a novel device which I was the engineer for.

See paragraph titled "The Right Stuff" on the following page:

The equation to understand how energy transforms into space and vice versa is simple high school/early college math. The high school text books are not incorrect. They only cover half the subject matter that they should and need to cover. Math is a tool that serves humans. If there is something that cannot be seen or identified by man then do not expect a mathematics equation in high school geometry class that will cover that topic. High school geometry deals with space and only space. Space can be transformed into energy. The high school text books need to be rewritten to include both. Otherwise they are deficit in my opinion.

What you link to is a solar tower project, or did you mean something else?

What the above article is referring to is that NASA has shown that specifically accelerated electrons, yielding specific energy photons lead to Nuclear fusion.

It is then saying that in multiple citizen science projects, (Hutchison, Ralkar, me356) glowing without extra heat has been observed and in all three cases, nuclear transmutation has been established.

Wonderful. But do you understand why? I have worked with xrays a little and may be able to help you understand your phenomenon. Consider this experiment. Fill up a car with only 3 gallons of gasoline in Los Angeles. Spin the bottle and drive in that direction. Where will you end up? Tijuana? Mojave desert? Certainly not San Francisco. Not enough gas to visit Bill Gates in Seattle as well. That is a simple example of how one can interchange energy with space. Xray generators like the linear acceleron provide energy with direction. Notice the last step in the video where direction is altered by a prism or what-not to provide uniform direction. When one transforms energy and space one realizes both how fragile and how extremely stable our 3D reality is. I believe extreme stability is where you might find the answer to your LENR questions. The NASA article mentions power generation. Power may not be generated at all. The system may be getting rid of excess power to maintain stability. You mention specific NASA settings. Monkey with the KV of the DVIS (imaging3 toy) or the period of the orbit and I guarantee your 3D image will disintegrate right before your eyes on your fancy monitors. A little more of this or less of that and all bets are off. Using an anomaly, consider a country that prints money. Along comes inflation. Inflation is so bad this causes social unrest. People are upset. What does the government do? Cuts 4 zeros off the currency at new year and starts over. You had 10000 pesos now you have 1 peso. Power is not generated just like money is not created after chopping zeros off of currency and reprinting. Stability and equilibrium however is maintained.

Using an anomaly
should be using an analogy:)

Are you deliberately trying to be cryptic?

If you want to look at fragility of 3space, look at Hutchison's work or the AAG interview with Stanislav Adamenko from 2006 when he reveals they found 100um object in their ash that acted like black holes.

No, not trying to be cryptic. It is difficult to describe the connection between a static one directional energy system, like the linear accelerator, and a gantry which rotates at a fast rate, like once per second. I think that the same forces that affect the DVIS 3D image process may be involved with LENR. Take for instance the question of how does Brilliant Light Power create all that light? The MIT guy behind that operation claims that he speeds up or slows down the orbit of a hydrogen electron. As I said above monkeying with the period of the orbit affects the stability of the 3D object. That's like the government printing money. The system can fall apart or to maintain equilibrium the system can respond with deflation. Cut several zeros off of your currency and all is well. That could be the source of your excess energy. By the way I am not a physicist. I have 1-2 years of math/physics for computer scientists behind me not the full monty. So I may act cryptic to avoid looking dumb when I think I see a connection which could be way off.

By the way, regarding Adamenko's hole. Press the button labeled "Agriculture" on this website below then search for the term "NASA".

Nice view of a hole in an apple. What's wrong with this picture? A hole is not a "look at the fragility of 3D space" silly! Look/see only applies to things. One cannot see nothing.

He he, I had a "oh you dummy" moment when I was trying to adjust settings to see holes inside an apple. I realized that there is nothing to adjust because there is nothing to see because a hole does not exist. A hole by definition is the lack of anything. And yet there it is in the image. Looks like a JPL/NASA crater photo. Only I did not spend billions of dollars of taxpayers money to do a spacecraft flyby.