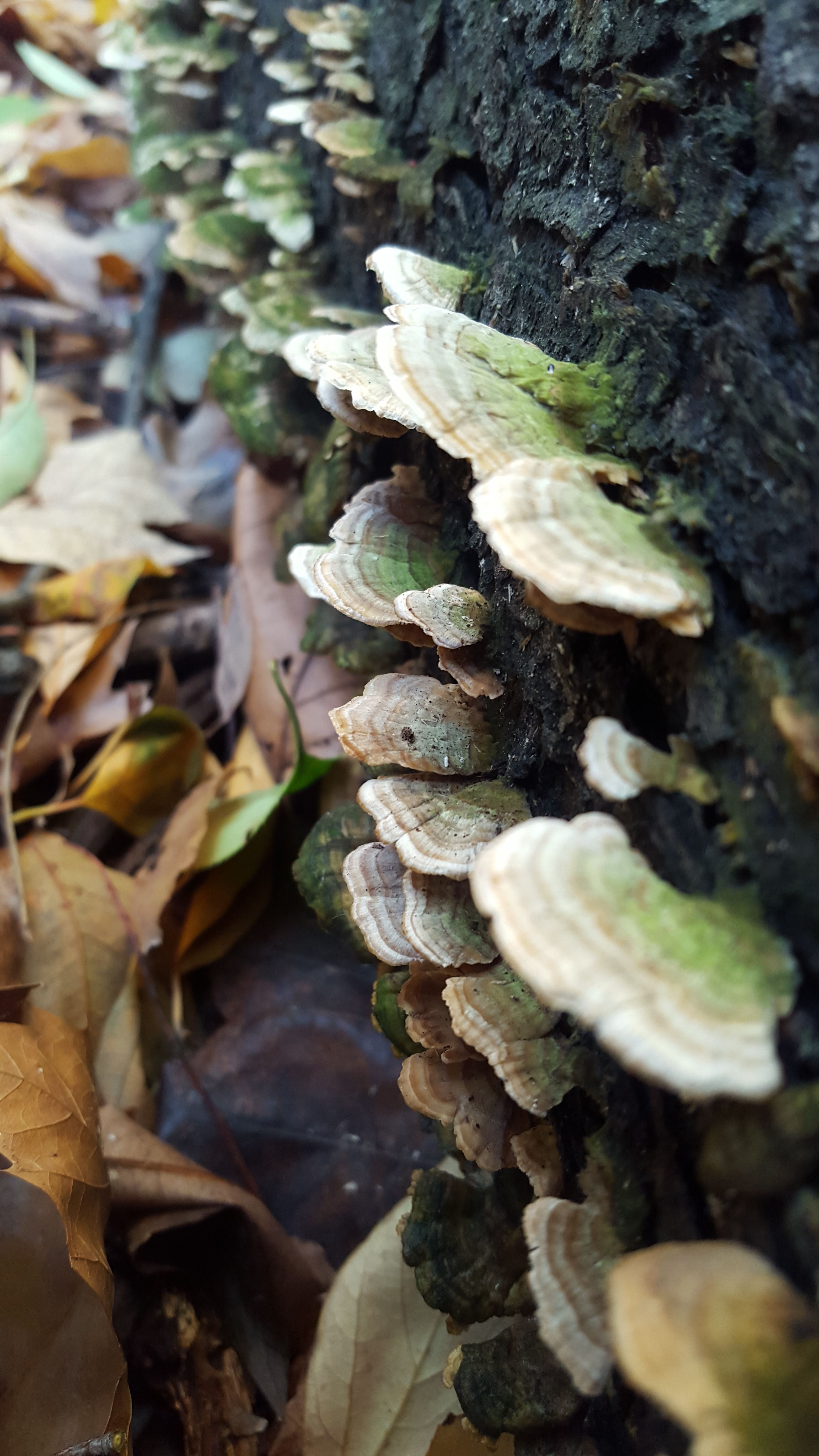 If you live near, or have ever walked through, a forest, ever, then this will look familiar.

Anyone who hikes through even the most basic natural woodland will have encountered this site a million times: A downed log awash in a large colony of ubiquitous shelf mushrooms. Most people simply ignore them, but even the mycologically inclined tend not to pay them much attention either.

When I pass by such a sight, I usually give a quick look and keep on going. Generally, I decide that the mushrooms are not interesting enough to warrant the investigation into their species and that they are probably just a variation on the "Turkey Tail" anyway.

But, since making the choice to regularly post on this blog, I've been paying a lot of attention to all the fungus I find as I explore the often mushroom rich confines of NYC.

Which is how I ended up spending some time with these guys. Obviously, the colony was thriving, although all of the mushrooms were also fairly old and beyond the point of releasing spores. The green coloration is, I belief, an algae rather than a color of the mushroom itself, although the green is a frequent associate of several Trametes species, and specifically seems regularly present to some degree in Trametes villosa.

Trametes is a genus filled with very thin, tough, color-striated polypores - most famously containing the species Trametes versicolor, or the Turkey Tail, linked to above. Beyond Trametes versicolor, there is not a ton of literature on the other species in the genus, at least not outside of scientific papers talking about its various scientific and practical uses - with specific focus once again on Laccase.

Its possible that the Trametes genus is discussed in more detail in some polypore specific field guide somewhere, but for the most part I ended up relying on Kuo's information and one of the references he cites to, specifically the second hand description of Hanns Kreisel's observation of T. villosa in South America. 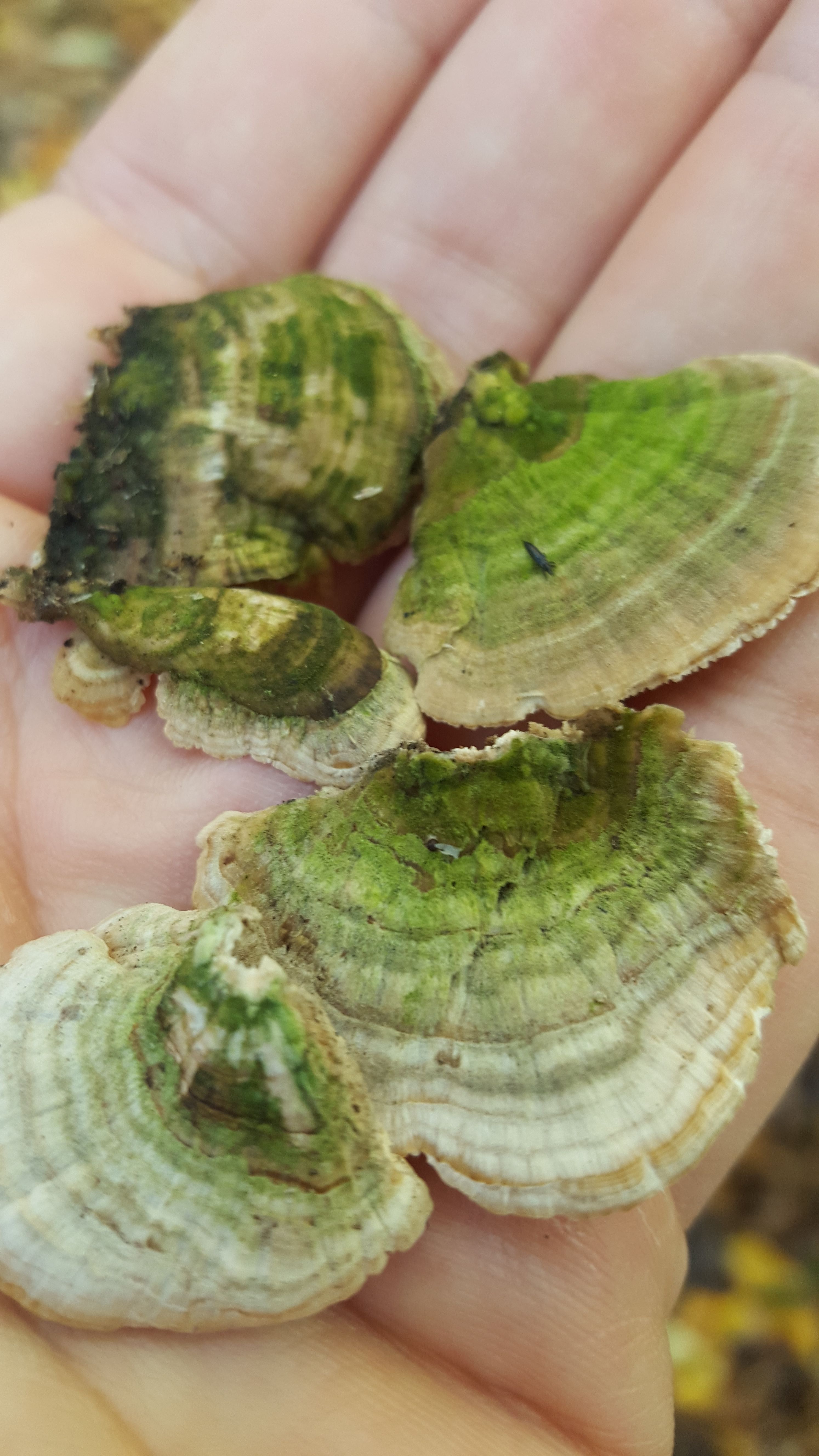 Personally, I think these are quite fetching

The caps - averaging around 2-4cm across - have well defined concentric zones of , mostly whites, light browns and slight orchre. The green algae or moss adds a delightful aliveness to the inorganic looking earth tones of the cap. But even with the algae growth, viewed from a distance, the mushrooms look like clam shells growing out of an old log.

The cap has basically no real "flesh", the whole thing being very thin. It is a little thicker than heavy duty construction paper, but more pliable. Although tough, the mushroom is so thin that larger specimens are easily torn by hand.

KOH had no measurable reaction on the cap or the pores, although both were quite old. And although the spores are likely white, these were too spent to retrieve a print.

Let's flip these guys over. This was why I decided to take some samples of this mushroom colony in the first place.

That pore surface appears to be toothed! Most of the mushrooms we have encountered have been either pored or gilled, but aside from The Lion's Mane mushroom, Hericium erinaceus, we have not yet encountered a mushroom with "teeth" on the spore surface.

Moreover, I had never seen a small shelf mushroom like this that had a toothed pore surface, so I believed it to be remarkable.

Just to clarify what I mean by "teeth", take a look at this close up. 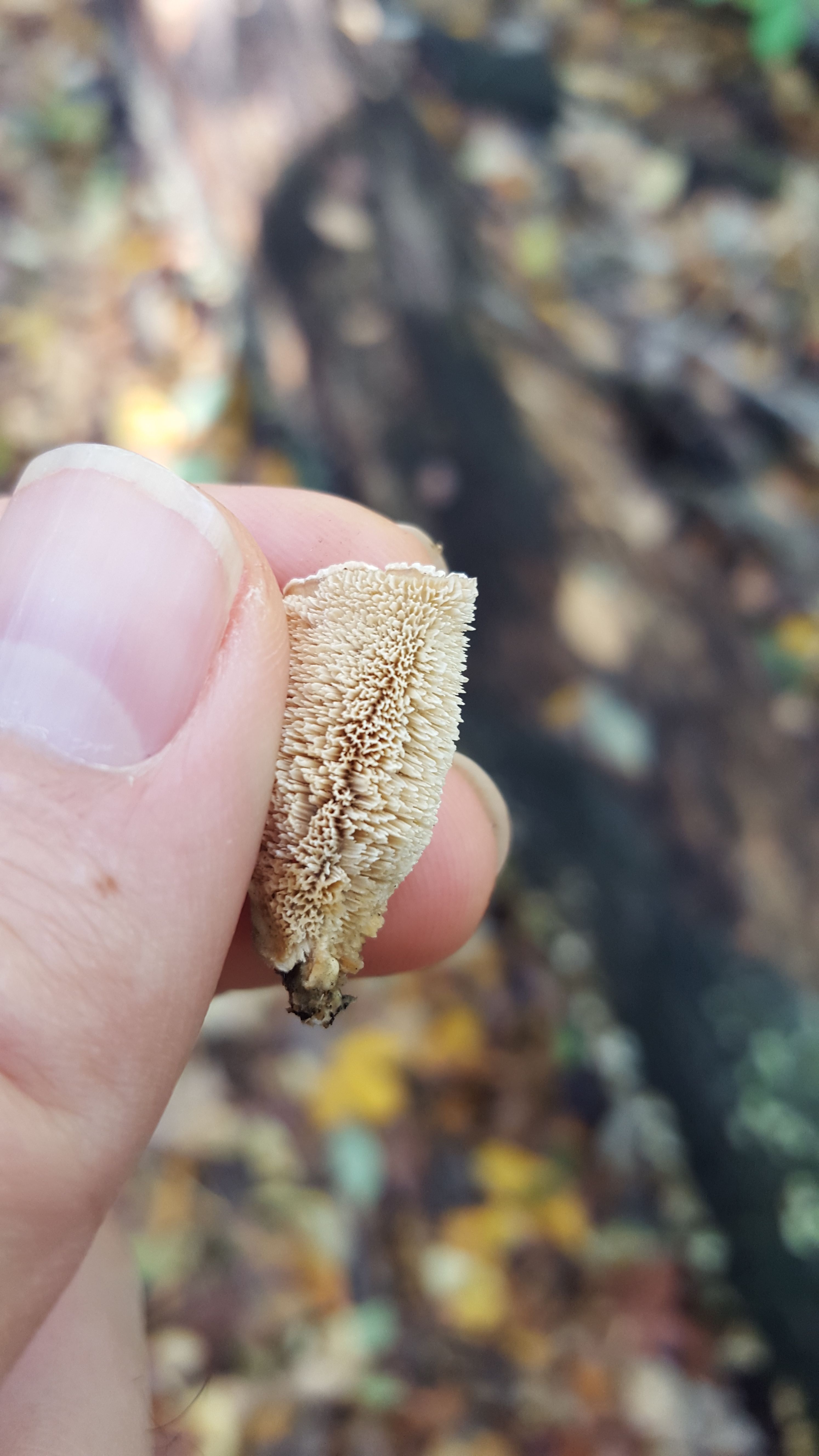 See how the pores are clearly individually defined and stick out?

That is generally what we mean by a "toothed" mushroom.

However, in the case of T.villosa, although the "teeth" seem readily apparent, the species is not really a "toothed" mushroom.

A real toothed mushroom, like H.erinaceus, develops the spore bearing teeth from the beginning, and then the mature spikes or teeth release the spores from their surfaces. In the case of T. villosa, the tooth-like effect pictured here is really just a side effect of the mushroom's aging and deterioration.

The young T. villosa, which I did not encounter, does not display such "toothy" pores. Instead, the mushroom begins life with a more conventional polypore pore network, and then, as the pores grow and distribute their spores, the pores slowly lengthen. It is only the fully mature, or even old, specimen which displays the pores in their final, essentially spent condition - as tooth like tendrils.

Although I misinterpreted the significance of the teeth on this specimen, the trait was nonetheless centrally important to achieving a relatively certain identification. Which supports my arguments for detailing your fungal discoveries as carefully as possible. You never know which trait is going to end up being the one to point you in the right direction.

It is with the spirit of detail in mind that I reveal another little spoiler! This is a calibration slide. Its purpose may not be immediately obvious, but for certain microscopic observations it really couldn't be more important.

The calibration slide will allow me to calibrate my microscope's viewing software and enable it to take very accurate microscopic measurements. For certain inscrutable genuses, this information can be super important.

I don't know when that particular trait will be dispositive in an identification yet, but as I said before, the more detail I have the better. I'll be making a post devoted to the microscope calibration process either later this week or in the near future.

Photos Are My Own

Hey @dber,
Nice post and neatly explained how the pores of some polypores develop tooth-like pores that can be deceiving.
The pores of those beautiful bracket fungi are not brownish enough to be Trametes villosa and the algae growing on top of the fruiting bodies points towards it most likely being Cerrena unicolor, which also develops tooth-like pores with age.
What do you think?

I think you may be right. But looking at Kuo's page along with the photos he has up almost convinced me otherwise. He lists the caps as 3 to 10 cm in width, when most of the caos I saw were under 3cm. Plus the photos appear to show some of the caps as fairly thick, compared to the very thin caps I'd found. I want to say only a couple of mm at most, but this really highlights my need for a more accurate metric ruler...

But the algae thing seemed spot on, and many of the characterisics seemed to match - then I checked out Messiah College's page on the species, and they extend the cap range from .5 to 10, and have pictures which are pretty much totally identical to what I saw.

However, to devils advocate for T.villosa, Kuo indicates the pores go from white to "a little brown", and the photos he has up do show a hint of green, as do some other dubiously sourced photos on the internet. Also the description of the flesh being "insubstantial" better aligns with the mushrooms I found.

In all, I'm honestly not sure. But I feel like based on the descriptions I've seen, they are both strong contenders, so I'm definitely adding Cerrena unicolor to the title.

Ohh, but the pores look a little more convincing for Cerrena unicolor. The color doesn't seem as dispositive as the physical structures.

I say that because, althoughI did notice many more pictures on the internet for T. villosa depicting a mushroom with a much darker pore surface, that didnt line up with Kuos descriptions or photos, which are basically the only detailed resource I found for the species.

Thanks man! The collection grows

It amazes me that you are able to find all those mushrooms in NYC. Just goes to show that if people actually opened their eyes and educated themselves, they would find so much diversity in even somewhat unlikely places.

Great post. I see them a lot on my nature walks(mushrooms). Guess I better start taking photos. lol

Can you take pictures through your microscope? Would love to see some.

I can and sometiems do - check out the recent Tolustoma post.