What STEEMIT teaches us about responsability and hard work.

razvanelulmarin (72)in #steemit • 4 years ago

Humans are notoriously bad at thinking about the future, preparing for it or acting smart today. We are hard-wired to be short-term thinking machines and anything else is effort, work and habit formed by will. As Bill Gates observed: 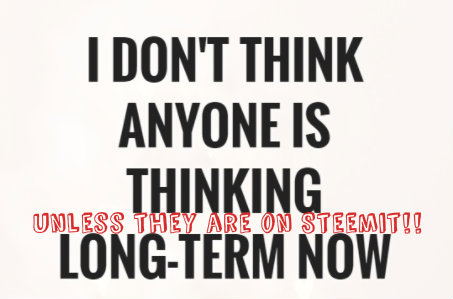 There is a reason why most people don't have savings, why people smoke, why they eat crap and many other examples. Of course, we are not all like this and many of us think about the future - usually with some level of anxiety - but do not follow the plans we know to be smart. Often, we get distracted and sacrifice something bigger in the future for what we want NOW.

So where does STEEMIT comes along in all this?
In my opinion there are 3 ways in which Steemit teaches us that being a long-longer term thinker helps.

#1.Payouts take 7 days.
That means that if you want to be paid TODAY you should have worked 7 days ago. If you want to be paid next week, you should do something TODAY. It's beautiful way to motivate yourself to be better, post and write more and do not slack off. After all there's no drug like a nice stream of income however big or small.

#2. Reputation takes months to build.
You can just jump into this and have high rep and the higher the rep, the higher the RESPECT. Which pays dividends down the line. When someone with rep 72 says something you are more inclined to listen. I know I am, cause I know what it takes to get to 70. I don't care who you are, if you have over 70 rep, you have my attention ( of course, you can lose it fast if you are an idiot but...it opens a door).
So rep is the nice intersection of grit, discipline and perseverance. You can't have that over short term.

#3. SP is most valuable than Steem

Initially it used to take 104 rates to get out all your SP. Everyone was a forced bagholder but also everyone benefited from not selling early. SP gives you benefits, power, curation rewards and a big chance of still having some coins when Steemit will go huge. It has none of the instant gratification of selling a few STEEM for a dollars and thinking:"Ah, I made some profits!!". In reality, you might have lost a ton of future profits!

For me, these 3 aspects changes a lot of how I perceive the value of now vs the value of tomorrow in many aspects of my life. I think it made me less prone to squandering time and money. Maybe it helped you too or maybe thinking it like that will help in the future. I had tended to view waiting as mere passivity. When I looked it up in my dictionary however, I found that the words passive and passion come from the same Latin root, pati, which means "to endure." Waiting is thus both passive and passionate. It's a vibrant, contemplative work. It means descending into self, into God, into the deeper labyrinths of prayer. It involves listening to disinherited voices within, facing the wounded holes in the soul, the denied and undiscovered, the places one lives falsely. It means struggling with the vision of who we really are in God and molding the courage to live that vision.

@drkalpana, there was a shift in my paradigm reading your comment. I am at a total loss for words to accurately describe the emotions I had reading what you wrote. Thank you for being on Steemit and providing such wonderful feedback.
@razvanelulmarin, your post was wonderful as well, I love the perspective you have on Steemit.

I would have upvoted for the Santa .Gif alone, but the rest of your article is right on target. So many people trade cryptos back and forth to build... they work hard but risk much. By positioning well, being patient and having the foresight to stay the path... you can gain so much without risk... just a ton of work instead. The arduous process of building a rep and SP is like forging a harder steel sword... something I recently had a duh moment over as well... thanks for yet another slap upside the head.

Thanks!
Honestly, sometimes doing nothing is the hardest thing ever. It feels - productive - to trade, move coins, sell buy...while in the end you are 95% sure to lose or gain less than you would have had otherwise. But that's human nature!
PS: for more gifs: https://steemit.com/fun/@razvanelulmarin/merry-christmas-from-steemit-check-these-hilarious-gifs

Spot on! I totally agree about the long term! And that the people on here seem to really get that too. Although if I ever reach a regular amount that meant I could do less hours at my normal job, and pay my bills with blogging, I would have to have a little rethink and start taking some money out!

Of course things are not black and white. No one says to starve for years until you can cash out something ( though maybe...) but to think that your long term is the REAL ticket.

That's where the fun begins I suppose! It's the long term approach that made steemit appealing to me and I am aiming to keep my hands off the money for as long as possible! Thanks for the reply!!

I think people should be in this community to contribute and develope by posts or something else without focusing the money. By time, money will come.

I find the motivation to work harder as I see the increase of people following me and of course the uptick in the wallet. This platform is a great tool to help instill a positive behavior as we see a 'profit' from our daily involvement and our strive to be better. I am only 2 weeks old here, but it has made me look long term for sure. RESPECT

What a beautiful way of thinking.... i never thought of it until now, that the seven days means you have to work hard today to get reward later.

Steem has changed how I view the future a great deal, and yes, it teaches

Steem has changed how I view the future a great deal, and yes, it teaches you ti be more responsible and actually plan ahead.

I totally agree with you! Steemit is not for everyone.

Excelent said. Steemit it s like a virtual school. We must learn how things work here.

Steemit is really an educative community I must confess, it teaches us hardwork and also to be creative in what ever you do. And for this piece you posted thanks for taking your time to put something like this down.
When I joined the community it was a bit difficult for me because of my laziness but after seeing some post about hard work I got myself together and I have started to put in more effort than before. This post is really helpful in encouraging not to relent and also teaches something about life is hardwork

Nice. I spammed the first few people I responded to here on steemit lol !!!! They taught me real quick. LOVE IT HERE! I have a new video I am putting out later today TROLLING Flat Earth DEBUNKERS!!!

Thats right I believe the Earth is Flat !!! Check it out if you have not looked into flat earth, not my video the subject haha=ERIC DUBAY IS the Best -History of Flat Earth

THEY LIE TO US! mike was right

I came to steemit first for the FREEDOM of speech. I am not sure how many people are aware how truly scary of a time it is here in the U.S. I was NOT able to BUY billboard space at 2 different MAJOR billboard compnies in NJ (I already do biz in diffeereent biz) BOTH my acct reps said "Corporate SAID NO." I was like WTF? It was foor my truth website.
I had $10k set aside (not huge for them but they ARE sales people lol) and they couldn't care if it was a MILLION bux!

Please visit my blog at some point because the developers of steem KNOW that .gov IS the ENEMY PERIOD. PEACE

Congratulations @razvanelulmarin! You have completed some achievement on Steemit and have been rewarded with new badge(s) :

I am in here for the long term surely. I am working towards building a good reputation and love it here already!

I agree, it takes more time to succeed on this platform, but it is worth it.
Plus, Steemit is a whole universe of interconnected various website, chat rooms and services, which makes it even more interesting.

Hey Razvan..Interesting point you have there..I’m romanian also like yourself but I just joined the steemit community a couple of months back..so I got a long way to rep 70.. still looking forward to reading your blog from now on! Keep in touch!

I wasn't a long term thinker at all until I joined Steemit. It has completely shifted my mindset for the better.

Everything comes to those who wait. To think ahead is an important quality that needs to learn. That is, to accustom oneself. Not to go on about the fleeting desires and fears. In Russia there is a proverb, "Haste makes waste". It can be attributed to this. No need to hurry, we need to move on. Not to take hasty decisions on emotions.