My Late January Update - Ep. 4 - Starting the New Year Off With a Bang

With things getting busy at work these past couple of weeks and after hosting #statewars last week or the week before I've been a little burned out on Steemit. I was also pushing to make the top of @abh12345 contest for engagement excellence rating in which I succeeded last week in getting first place. On top of all that, I've decided that steemwhales is dead for good and I need to update the information I present and how I present it going forward.

January overall was a very good month for me. I have a feeling it may be the best month for me this year. A part of this was I was pretty laser-focused on Steemit for this past month along spending a lot of time making posts, commenting, and curating the best I could with my other real life obligations. That combined with the price of SBD pumping so high allowed me to make a pretty big step change in the amount of Steempower I earned last month. With the Stemwhales situation, I decided to include the chart I created below to give myself some encouragement and a visual feedback of my progress. As you can see, those who were working hard in December and January (if you didn't transfer all the rewards off Steemit) were able to grow their Steempower relatively quickly. As the price of Steem increases and the price of Steem Dollars goes back to $1 I expect this growth to begin to level off and my increase in Steempower to continue to slow.

I was Interested to see the percent increase in followers almost directly correlates to the number of posts that I made. Just as a clarification for the chart below, I started tracking my progress in October even though I started on the platform back in June of 2017. That's why the chart below starts in October instead of June/July when I first made my account. 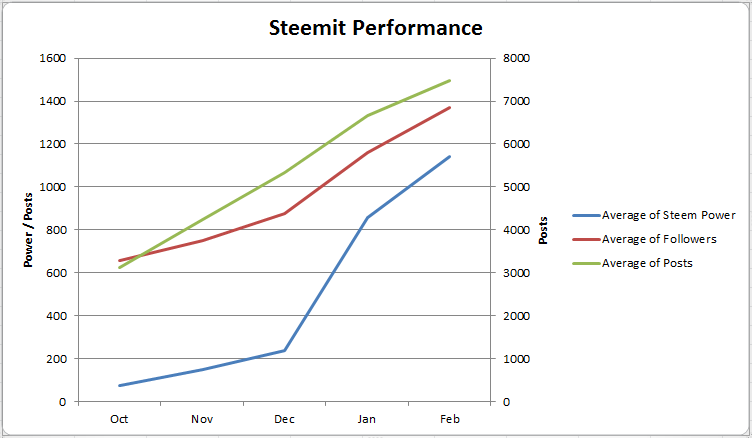 5540 -> 7242 this may be my highest post per day of any month since I started at almost 55 posts per day. I've been pushing hard this month to start the new year off strong. I'll be happy next month if I can average 50 posts per day. It's going to be even harder to make that goal considering I've taken most of this week off so far.

56.7 - 57.84 I know the higher you get the harder it is to increase your reputation, but was hoping to hit 60 before the end of the year. Since I've gone up by basically 1 point the past two months I'm thinking that the start of April will be a good goal to hit 60 by. I just hit 58 a few days ago so I don't think I'll be able to make 59 by the end of the month so maybe 58.5 will be a good goal for next month.

To wrap things up if there is anything, in particular, you'd like to see me track, but I have not yet included it on one of these reviews let know. Also, would there be any interest in seeing a weekly or bi-weekly update instead of a monthly update? I enjoy writing these and tracking my progress, but currently feel like once a month feels about right. If you enjoyed reading this let me know in the comments down below as well and thanks for supporting me on my Steemit journey to full-time Steemian.

I was just reading this morning how important reputation 60 is compared to a bunch of other factors. I was aware reputation is important but I had no idea that milestone is rather important. I can see now why so many of you aim for 60 as a goal.

SBD price was a nice kick while it’s been lasting! I’m just wondering how inactive people will go once its back sitting around $1 again.

I didn't know 60 was a great goal it's just the next round number. If you remember / can find the article I would be interested in reading it. I think it's more of a badge of honor than anything as far as I know your reputation doesn't mean much.

Yeah, that's an interesting point about SBD. I always wonder what will happen if they just get rid of SBD as it doesn't seem to be able to hold its peg very well with its limited supply and the witnesses don't seem to be interested in keeping the peg at $1 to help grow the platform. Seems like a rather short sited solution to help grow the platform.

I never expect the 1$ "peg" to work how could it if its on external markets. To many factors can drive that without much effort.

Well, it has a rather good support mechanism as you can burn SBD when it's worth less than a dollar to get the price back up, but I don't think it has a good way to lower the price.

Just read the post and that's awesome. Everyone else I've seen talk about it said it was a useless number, but I think that post shows otherwise.

More data is always better in my opinion. Weekly would be good I think. Might allow you to show things better. Might be interesting to see a bar chart or something of posts per day with like a running payout average line.

That's cool, I've only been recording the data a few times a week now (started off doing it daily), but may go back to daily to include some sort of post per day information.

Nice work for January @gniksivart! Lets see what February brings with STEEM and SBDs seeming on the rise again :D

Yeah looks like the Steem/SBD ratio is under 1 again so I've been taking advantage of that :D

That's cool. How do I track my stuff?

I do it manually in an excel spreadsheet. I'm sure there are better ways using current 3rd party tools, but I haven't spent the time yet to figure them out.