RE: Story of an honest Steemian. Honesty in today's world it still exists!!

Over the years I've been ripped off, over charged, stolen from, not been repaid, scammed, etc so many times to expect dishonesty by default.

I have experienced the same thing and so when this thing happened, my first thought was to return it. I knew @bunnypuncher must've punched wrongly this time.

I'm Jonah. I'm the other half of @beatenegg. Like what my entry on the comments section of his contest, I share this account with my husband. He was driving from work to the hospital when it happened.

I posted last night that I was planning on posting a lengthy blog but since my little boy was feeling sick, I had to set it aside. This morning we went to see the doctor but the doctor was 2 hrs behind. When she arrived, she just checked a little on my son and ordered a few lab tests. Don't worry folks, it wasn't anything serious, although as a mother I had to make sure. Dr said it was some respiratory tract infection. Gave some antibiotics and got sent home.

Anyway, it felt like we were waiting forever. We were at the waiting area, me, my son who is sick and my daughter who had no one to be left with at home. My son was napping, head rested on my shoulder. Little girl eating her chips. Me, I was checking out Steemit. Passed by @bunnypuncher's contest, made an entry and checked other blogs.

I went to check if there were any replies or if my comment got upvoted. There was, saying I was getting 1 SBD. When I checked wallet, my phone rang. It was John, the other half of @beatenegg, telling me to check our wallet, asking if I won anything from you and the he was on his way. I said, I won 1 sbd. The call got cut. Anyway, when I checked I knew it was around 30sbd, but to my surprise, it was around 190++sbd. I checked again, maybe I was looking at someone else's wallet. But it was mine.

The thing is, I couldn't see what it was for. It just looked like this; 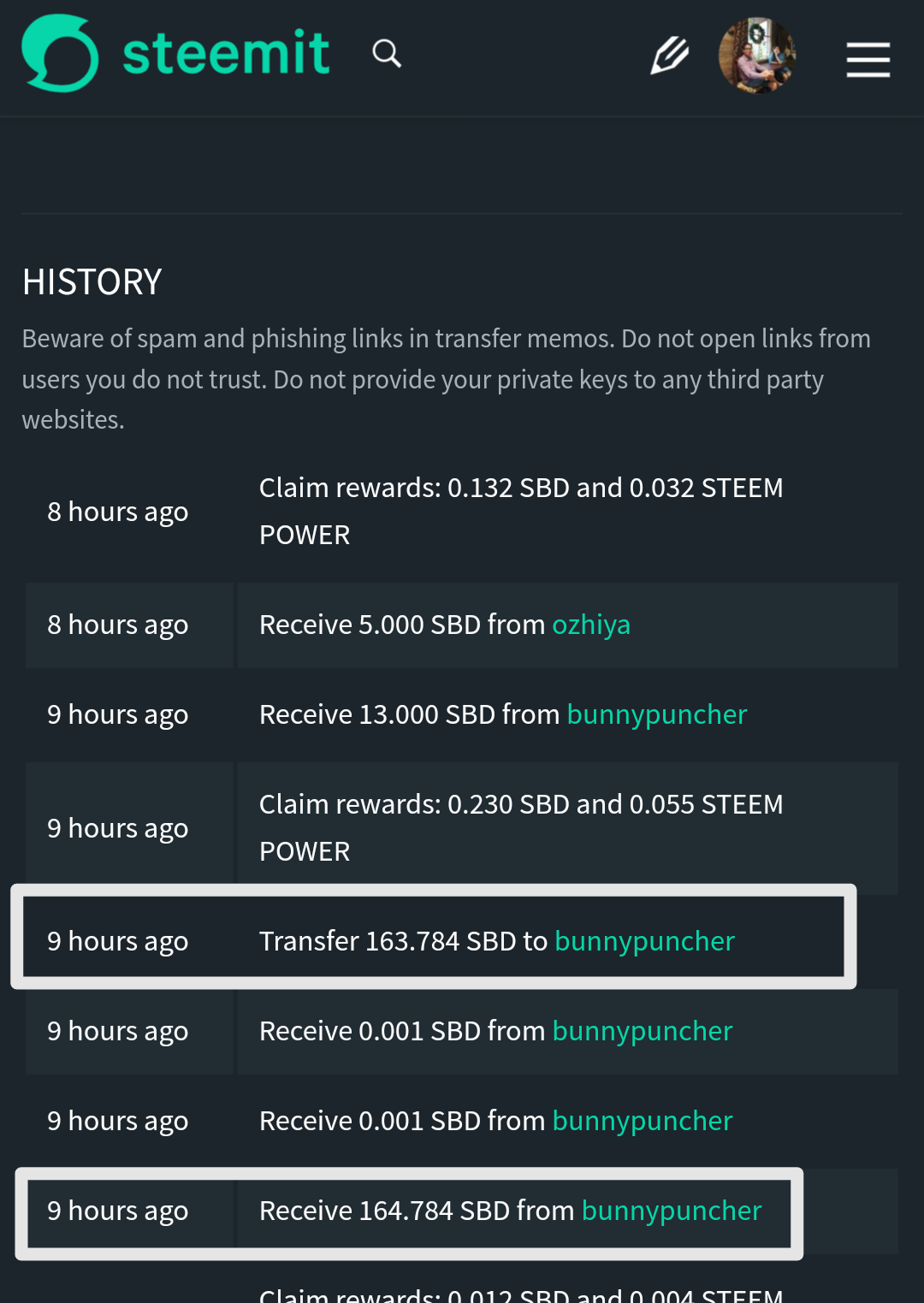 I know I only won 1sbd, why would he have sent more than that? Being fairly new to steemit, i don't know how steemchat works. i didn't know how to return this. I had to call John again. While the med tech was calling me too. I told John there must be a mistake and both agreed to return it. He taught me how, over the phone. I didn't know the other transfers had messages asking me to give them back. I just did what was right and replied to his comment on my comment. My son is sick and I needed money because currently I'm just doing freelance and it doesn't pay very well. But more than needing the money, I needed good karma. Always. Not just this time. I needed to believe that in case I do the same mistake, there will be others who will do the same thing @beatenegg did.

Thank you fellow Steemians for all the nice words. Sorry, @bunnypuncher, I wasn't able to respond to your last comment right away. I had a patient to attend to. Right now, they're sleeping. Before I go to sleep myself, I'm thanking heavens for using me to restore your faith in people's kindness.

Good night from my side of the world! 🤗🤗🤗

I hope for the speedy recovery of your son and wish your family the best. I very much appreciate your honesty and I made this post to show others this still exists in the world. I'm hoping between the proceeds of this post and attention this gets will cause funds for your son to show in your account. Honesty like yours should be rewarded and be an example to others. I'll also be sure to send the same amount as the 1st place prize (10 SBD) to one of the most honest couples I know at the end of the contest. A small token to help you and your family for such a kind deed you have done for me.

Bravo my friend good things comes to those who do the right thing. Hope the kids are alright now. I'll see you later buddy.

Thanks, Ryan. We're getting by. Young boy is still feverish and Jonah is a little worried that the little girl is now feeling a little warm. Oh man, must be the weather.

Don't worry. These two will be alright. Their mommy is better than the doctors! And they are excited to join the steemit meetup, especially Kiero who has been doing the artworks we submit for art contests.

Oh I should apologize for always referring to you as he and him. When in fact you are a couple and family. A horrible oversight that just occurred to me.

Thank you, I really hope he gets better soon. He's been terribly worried about the lessons he's missing from school.

And it's ok. Our names are confusing. John and Jonah - both guy names. Funny thing is, whenever I get something from promo mail, I always get addressed as he. Anyway, He insists I create my own account. I say we can just keep it this way. We both write, we both earn. And there's not much users here who share the same account. So its pretty unique. 😄

I love the conversation here. It only proves that there are still good and honest people in the world. I admire you people and I am following you @beatenegg and @bunnypuncher.

Ty I'm humbled by the show of support from steemit.

Hello, @georgie84! Nice to meet you. Yes, there are still kind hearted people. They come out in the least expected situation.

Yes, and you are one of them! Pray and all good things will come to you. May you and your family specially the kids will have the best of health

This is a fantastic story from both of you! I'm excited to be joining a community that's committed to using technology and money to make the world a better place. There are so many anonymous communities that encourage negative behavior, but it looks like Steem is building an amazing platform to connect with amazing people! Thank you both for giving me a great introduction to this community.