❓Answering Common Questions: What are Steemit's Smart Media Tokens (SMT)? How could they be used❓

Personally, I'm really excited to
see what these SMT's can do! 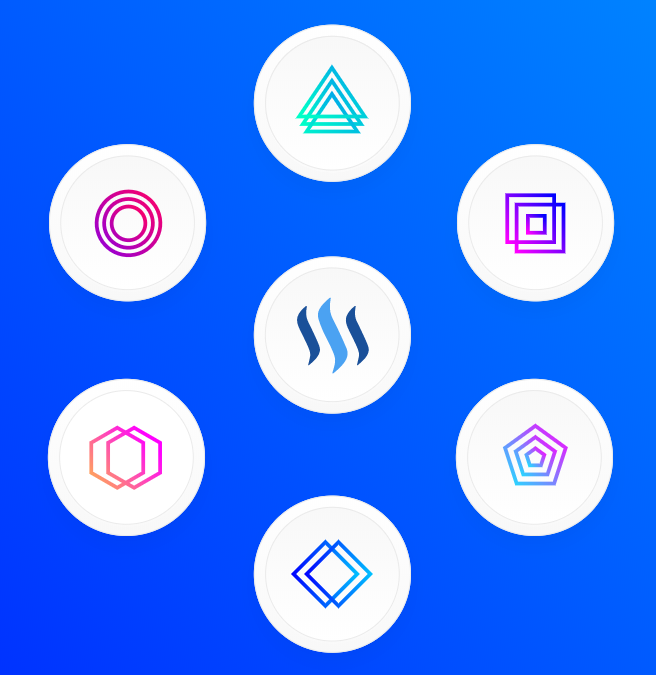 Uses for both inside and outside
of the Steemit community we know.

For a long while now, a large part of Steemit's development resources have been put towards the development of these SMT's. In fact, you might have seen the latest status update about it on @SteemitBlog's recent post HERE or at @ned's impromptu Q&A session at an Austin Steemit Meetup. As the launch of SMT's gets closer, you'll hear more and more about them.

But as always, the point of my "Answering Common Question" FAQ's are to give you a simple answer to the questions I know you have...this time surrounding SMT's. So rather than glaze over people's eyes, we'll be trying to focus more on how these can actually be used, versus technical details. If you feel you want to hear some great discussions on Smart Media Tokens, I've already put out three, one hour SMT Talk podcast episodes:

This is also a frequent topic over in the Steem Experience Discord...if you're ever looking to ask some questions or discuss with others.

What are Smart Media Tokens? (SMTs)

The short answer is that Smart Media Tokens are easy to setup, cheap to create, custom cryptocurrency (or token.) You'll get to choose things like their name, reward structure, if you want to raise funds through an ICO, how many tokens to make, etc.

Even more importantly, SMT's are to be cheap and easy to setup. All that's needed is a Steemit account, 1 Steem Dollar and fill out the options in the setup forms. Here is a sample of the options page from the SMT Whitepaper: 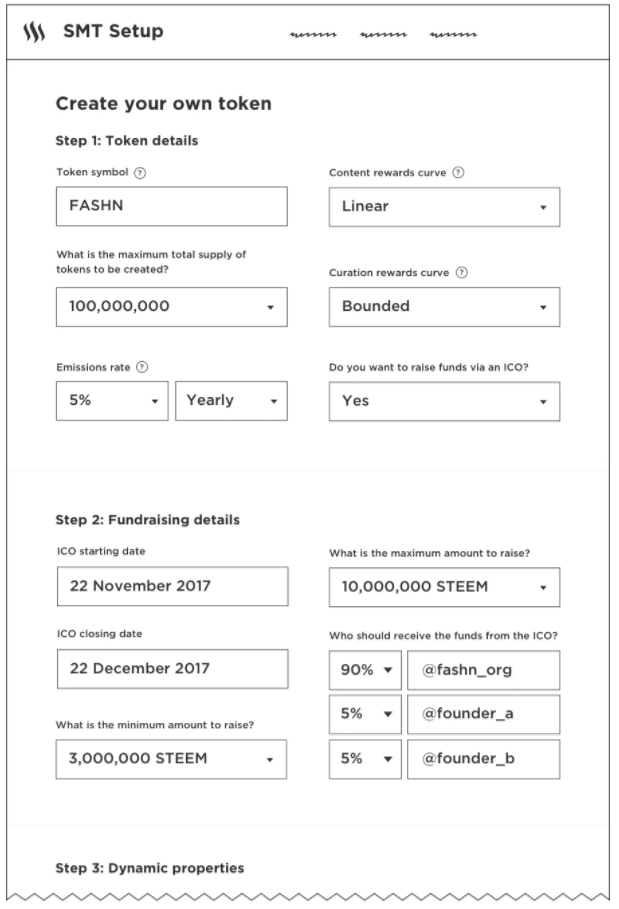 How much would one of my custom Smart Media Tokens be worth?

Not everybody has to have their custom tokens be 'worth' (i.e. trade-able for other Bitcoin, US Dollars, etc) something. Some people might have their needs met just by being able to pass the SMT's around their group or redeemed for things (like paying a subscription fee, an upvote, or any other 'non-money' based option.)

However, for those who want to have a monetary value for their SMT's, there are a number of options:

This is one of the few times I ask you a question as my answer: How much do YOU want your tokens to be worth? Do you want to be able to decide or let the market? The beauty of SMT's is that you literally can make a coin to do what you want...the trick is figuring out What do YOU want your SMT to do?

How can my SMT's be distributed or given out?

This again is largely up to you to decide. But you have a bunch of options available to suit your needs including:

MOST IMPORTANTLY: How can these SMT's be useful?

A huge aspect of SMT's is that they can be put to use outside of Steemit itself their own websites, making it easy to start interacting with their clients or audience in a new way. For places like Wordpress or PhpBB a nice widget feature could be put together using the current Steem API's (here and here or tools like Steemconnect.

The whitepaper itself give the following use cases:

One of the ways in which publishers will be onboarded faster to SMT integrations is by offering a Steem-based comments widget that can easily be integrated into existing blogs that are built on software such as WordPress and Blogger. The developer employing the widget would be able to take a percentage of the tokens (called “Shared Rewards”) distributed to the commenters for themselves, thereby creating a business opportunity[.]
-SMT Whitepaper

Let’s examine an instance in which an entrepreneur is looking to provide liquidity in the Steem ecosystem. The entrepreneur can issue an SMT without inflation properties, and simply that they will provide structure to peg it to USD (or any other debt, contract, or asset), making it like an IOU or basic derivative. The structure they provide to the asset
includes buying and selling it near $1, similar to Tether. The entrepreneur sets up bank wire capabilities for buying and selling, and takes a small % on each transaction. The derivative trades against STEEM, and also brings capital into the ecosystem to be used across all tokens. I've already seen a couple of places who have built up their plans and even started their ICO's:

In the end though...there is tons of room to be creative on how you can use your custom made tokens. If you haven't read it yet, I highly recommend reading @donkeypong's post called The Day the Paywalls Died. It walks you through (a possible use case on) how a family newspaper could be saved from going out of business using their Smart Media Token.

I don't know of a set date just yet. Most of what I've heard is Q2 2018 but that's very different than an actual announcement.

For More Information or to Ask Questions

It's impossible to cover every aspect of the Smart Tokens in a single guide or discussion. So to supplement this overview on SMT's...Keep an eye out for more SMT Talk podcasts! Currently I'm trying to do a 1-hour show per week covering different parts of the whitepaper and looking at projects that have announced their plan to ICO or launch an SMT.

The first three episodes focused on:

Please upvote and resteem if you found this guide helpful.

That's really helful..everyone is talking about smt here but i don't understand it after ready whitepaper because it is very complex ..thanks for defining it in very clear way..i hope that smt bring revolution on steem. Thanks for article ... resteem so that minnows like me can also understand the concept of smt in easy way.

Wow I found this very helpful, but I’ll still need to read it a few more times to really begin to wrap my head around it. Thanks for getting this info out there in an easily understood way now!! Really appreciate the time you’re taking to educate us 😉🙏🌿💚

Thank you for this explanation that's easy to understand, especially for non-techy people like me :) I didn't know that some SMT's can be easy to set up. I thought they all have to go through an ICO and have all those complex things like whitepaper and roadmap :D I'm amazed by all these new concepts!

I just can't imagine yet what it will look like on Steemit. Like will there be a separate button for giving SMTs aside from the upvote button? I will check out the other talks as well so I'll learn more :)

This was honestly something I'd been wanting to get put together for a while...I just had to get past my recent deadline at work , lol. It is definitely going to be interesting to see how these go...especially compared to things already out there like Bitshares UIA's (User Issued Assets) and Ethereum's ERC-20 tokens.

On Steemit itself, I don't see it changing too much from what we're used to on here...mainly just the addition of the internal SMT market (which I'd figure would fit into the existing marketplace). I don't think we'll see any new upvote buttons or anything along with the current ones.

But...when communities are launched here on steemit (we'll actually have a 'create community' button to do this with) we might see spots where voting or other transactions would use their custom SMT. The big thing I foresee are communities actually moving off of Steemit itself to their own websites that have worked in the different parts of their SMT. The main thing people would then need Steemit for would be the wallet.

I have to look more into Bitshares, there seems to be a buzz about it and I was just lazy to check lol. That's one thing I like here though, I'm getting into concepts that wasn't readily available for me before Steemit. It's easier to grasp somehow because I'm part of it.

I like the concept of the create community button, I think it's the communities that keep Steemit moving and by giving these SMTs and autonomy to do what they need for their community would be powerful. It will take Steemit to a whole new level. Excited to see how it goes :)

Thank you! I tried to find that line of 'just enough' without causing information overload. :)

I think you got Just the right balance

Hi @sykochica, I just stopped back to let you know your post was one of my favourite reads and I included it in my Steemit Ramble. You can read what I wrote about your post here.

Join us on Thursdays for Pimp Your Post Thursday at 11am EDT or 7PM EDT in the Steemit Ramble Discord or:

Thank you very much my dear friend for clarifying and explaining STM’s , The article is really wonderful, it explains and explains a lot of questions, I hope everyone will benefit، good luck my dear lady @sykochics 👍👍😉
All the best for you 🌹😊😃

Thank you really. Before now, I had never heard of smart media tokens but by following your posts, I am seeing how useful they can be.

I have heard about these tokens and I was wondering how they would work outside the Steemit world. Thank you for explaining it.

wow it will be that simple to create cool :)

I have this bookmarked, because I'm sure I will have to reread several times to have the info sink in to my fuzzy head. Thank you for the info. You've been a great source of info to me, and I appreciate it very much.

Now i see why steem could go to the moon literally

Absolutely brilliant post that deserves MUCH more attention than what it's getting. You answered many of my questions regarding SMT's.
Thank you!
Upvoted & Resteemed

That was SO comprehensible! Thanks for taking the time to explain SMTs in simple language :-)