Philadelphia Hates Winners: Basketball's modern version of Notre Dame in their backyard and they want nuthin to do with it

Listened to Philadelphia radio, both before and after the big NCAA Title game, and there's this story being told that Philadelphians don't get all apesh!t-crazy for Villanova like they do for the Eagles. Why would a city spurn its own homegrown basketball version of Notre Dame Football????

Villanova is a Main Line college not within Philly's city limits, that's why. DUH!! For those of you not familiar with Philly, the "Main Line" is a run of exurban towns which run along a storied main railway line out of the city to the west along the country's first highway-- Lancaster Pike (which goes from Philly to Lancaster-- home mainly to those who still favor horse & buggy over automobiles). The Main Line is a bit of a "rich" blueblood area of Philly, mainly bc when it was once fashionable for men to put their families out "in the country" for the summer while they commuted to the city to work (back when men of wealth worked in the city), the hot area to do this was along the Main Line. Philadelphia fans call themselves "blue collar", so god forbid a college outside city limits on the Main Line of all places would get any love from Philly fans who favor their Temples and their LaSalles their St Joes and even maybe their Penn's. This is of course ridiculous, as St Joe's and LaSalle AND Villanova are Catholic schools, one of which just happens to be in probably the lowest-rent district of the Main Line. No Philadelphians won't go nuts for Villanova even tho it's the town's first Dynasty since the A's properly left town (and continued winning far more championships for OTHER cities than the full collection of pro Philly sports teams, including all other sports, won cumulatiely! Disdaining a shining example of good sportsmanship and a fantastic organization led by probably the greatest coach Philadelphia has ever had in its sports history, is just something which only reaffirms our hatred for Philly fans-- themselves best referred to as a bunch of clowns who throw snowballs at Santa Claus.

Villanova is a CATHOLIC college for crissakes! You don't get much more "blue collar" than that.

Philadelphia officially has it's own homegrown basketball version of Notre Dame football right under their noses, and they can't appreciate it?? 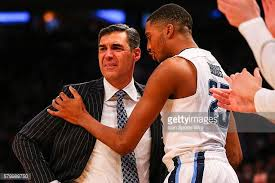 Less irritating than the above topic, but still irksome: the national basketball media morons keep using the term "blueblood" with Villanova. Are they blueblood now? Aren't they?

Let's get some things straight, to be a blueblood, you have to have two things:

Duke ARE the bluebloods, they are WASPs, they are rich, they are fantastic at basketball for some unknown reason, and hopefully they don't cheat (that much).
Kansas? Sure, they are basketball royalty bc Naismith made them royalty, but it's just a state school, no? only thing blueblood about Kansas is their team colors.
Don't care to know anything about Gonzaga other than they produce some really good NBA players, but they'd be a closer candidate than Villanova, but they would actually have to win something first.

What's the question they are REALLY asking while throwing this "blueblood" term around?
Can Villanova bc THEE destination in basketball? Sure-- particularly for catholic kids. Gillespie? A readheaded Italian kid who can hoop? This of course assumes Wright doesn't pull a Billy Donovan (or a Dallas Green, or a Pat Gillick). God help the knuckledragging city of Philadelphia if he leaves. GOOD fans trapped inside the confines of the Philadelphia metro area would have to drop Philly sports officially, forever and they could rightfully blame the fans for hating another winner and forcing it out of town.

Have you ever see that awesome cameo wrapped inside the worst movie of all time? It's written by Tarantino of course, and subject matter is Top Gun. At the end he says "Go the Gay Way, Mav, Go the Gay Way".
This is what comes to mind when listening to all the stupid ass talking heads beat the media drum on dumb topics they need to exploit, like Wright leaving. Know what we say? "Go the K-way, J, Go the K-way". As in.... Coach K... as in... become a legend forever by just staying put and continuing to re-invent college basketball. But to do that, Jay Wright will have to continue to embrace the city who doesn't really embrace him as the first Philadelphia sports DYNASTY since the Philadelphia Athletics.

Philly sports fans have been hoping for a dynasty their whole lives, always frustrated with how the city getting ONE rare victory or Finals appearance a decade. The Dynasty's been right under their noses the whole time, since 1985, buried in Catholicism which is the very last place they'd look.

I love Jay Wright. I think behind Coach K he is the best in the game right now. Calipari is pretty polarizing, so I have to put him at a very very very close 3rd. If I was a top prospect I probably would want to play for Coach K, Jay Wright, or Roy Williams. Not sure how I would feel about Calipari's style of coaching, just constantly yelling in my face.

Philly better embrace this dynasty, because it may not be something that lives forever. College basketball dynasties can fizel out quick. 1990–91 UNLV Runnin' Rebels basketball team, etc. I am curious to see if Lousville will survive now that Pitino is gone.

As for the city of Philadelphia, I got a feeling that the 76ers are about to make a deep run. Exciting times for that city.

Villanova Basketball has had to combat more than apathetic Philly fans. I went to Villanova and had conversations about the basketball program with some of my professors. University professors are privy to inside info, certainly more than students are.

Regardless of white collar or blue collar--it doesn't matter what color your shirt is--Philly fans like a winner, I don't care if it's a game of pocket ball.

Why would a city spurn it's own homegrown basketball version of Notre Dame Football????.

Chintzy, but we fixed the error, happy now?

"I am a bot destined to educate the masses and fight illiteracy!"