Understanding the Difference Between Vanishing Point vs The Horizon: Spotting Flat Earth Deception

We've been discussing the recent rise in people who believe the earth is flat, and how one of the methods they employ to bring the gullible into their cult is telling half-truths that are just believable enough to fool people who don't have the time or ability to check the claims. One of these half-truths that we touched on just a bit in our article Everything You Wanted to Know About the Horizon, is the difference between objects that are far away disappearing due to being beyond their vanishing point versus objects that disappear over the horizon.

One of the flat earth deception techniques is to conflate these two concepts with objects that are just the right size to disappear due to vanishing point immediately before or right on the horizon, and to then use a telescope or high-powered zoom lens, declaring that anyone can bring back any object beyond the horizon so long as a sufficiently powerful telescope is used.

The vanishing point of an object is when the object is so far away from you it seems to disappear. Objects will disappear at different distances from you depending upon their size, your vision, and potentially atmospheric conditions. But the smaller the object, the closer to you it will reach it's vanishing point, and the contrary is true as well; the larger an object, the further away from you it will seem to vanish.

This is an image of the buoy in the video above. Note that you can still see water behind the buoy. It is clearly in front of the horizon and not over or even on the horizon. But flat earthers are using this as an example of an object having disappeared over the horizon and having been brought back with a zoom lens, when it's nothing but a deceptive trick, or possibly ignorance. For many people, videos like the first one are shocking because they do not understand the difference between vanishing point and the horizon, and really believe that the buoy was beyond the horizon! Along with a lot of psychological techniques telling them they are being lied to by, basically, the entire world, and assuring them they are 'awoken' to the truth and are so smart that they can't be fooled by a global conspiracy, many people are deceived into thinking the earth truly is flat by this video and others like it.

Versus Over the Horizon

But these videos merely show objects past their vanishing point because the object is small. When you get a large object, such as the container ship in the video below, you'll see that part or all of the ship is obscured by the horizon before it reaches it's vanishing point. The portion obscured by the horizon, it can be easily seen, cannot be zoomed back in with the zoom lens, and the rest of the boat is obviously visible, so it is clearly not an issue of the bottom being too small to see. It's simply obscured by the curvature of the earth!

Because those susceptible to these psychological techniques feel special and incredibly intelligent for having uncovered the largest and longest conspiracy in the world and outsmarting every scientist who has ever lived, many simply never look for any evidence contradicting this deception before rejecting over 2000 years of scientific inquiry on the shape of the earth!

One of the favorite comments flat earthers make is that mainstream science is wrong and that every flat earther is a 'real' scientist. Yet, unlike actual scientists, providing evidence contrary to their fantasy doesn't mean they give up feeling like one of the smartest people to have ever lived. Instead, they will invent something to explain away the reality or a spheroidal earth that you must accept unconditionally else be labeled a brainwashed shill or part of a worldwide conspiracy to hide the true shape of the earth.

In this case, many have realized that these objects simply cannot be brought back with a telescope, so they now claim that objects disappearing by 'perspective' just disappear bottom first, when it's clear to anyone who has watched small objects disappear into the distance, like these batteries on colored paper prove, this is simply not true. We can still see the furthest away colored paper on the floor, just as we'd expect to see. 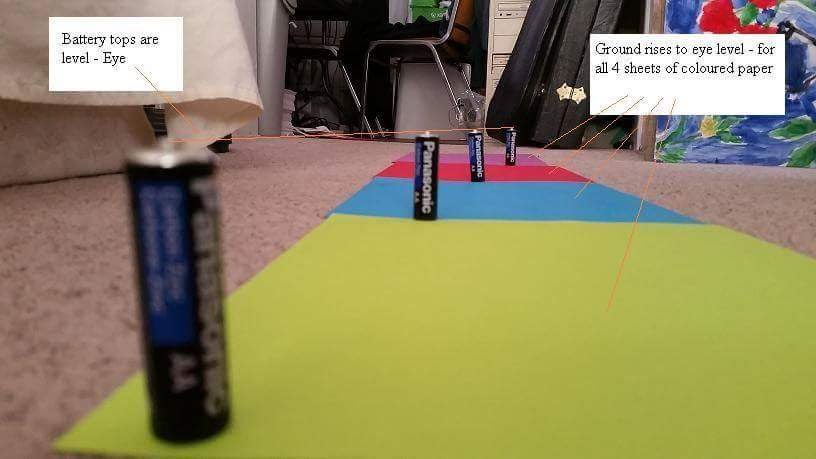 It's quite amazing that this phenomenon has popped up when it's so easy to find out the shape of the earth through simple methods like I outline in the article Horizon Drop: the Easiest Way to Prove the Curvature of the Earth. Unfortunately, this is the reality of this growing minority that seems to be incredibly appealing to many.

Seeing the deception being done will hopefully dissuade at least a few of those less susceptible to these psychological tactics. I'm afraid, however, that most who identify as flat earthers are too far gone to have their beliefs changed with facts and reason.

If you enjoy reading about science, please join us on the SteemStem project. Another clear and well reasoned post. Focusing on just one specific topic ensures you completely cover all your bases.

There is one small grammatical error I noticed: “can do the same thing will all objects” seems to be missing a verb.

And we all know that even a single typo negates any argument in which it is found! I think there was also an 'it's' that should just be 'its,' so flat earth = confirmed!

Lol great post! This flat earth conspiracy phenomenon is completely baffling to me.

wow, great post and good video..!!
earth is not flat

It's interesting how, amongst the two sides of this issue, there is only one side mildly insulting the other. The insults don't seem to go both ways from what I have watched and read. I don't think there is a need for it, because I feel compassion for those whom hold their indoctrination near and dear, for I am one of the indoctrinated who has learned to use questions instead of insults and respect instead of assuming ignorance when questioning that which most have been taught to believe is true. Deception is a tricky tool, especially when there are large sums of money to support it. When I read and hear insults with regards to intelligence during these discussions, I become suspicious because the truth can and will stand alone. Truth does not need to be propped up with insults about those with opposing viewpoints. The insults actually act as a red flag for me. So, thanks for making the truth more obvious for us all.