Last Night I Posted About The Proof Science of Red Sea, Now lets to continue the science of egyptology, A Scientist always find a science to write as good article, Suppor Scientist By Join @steemsteem. Okey lets to the point.

Pyramid Vs WTC Vs Orion 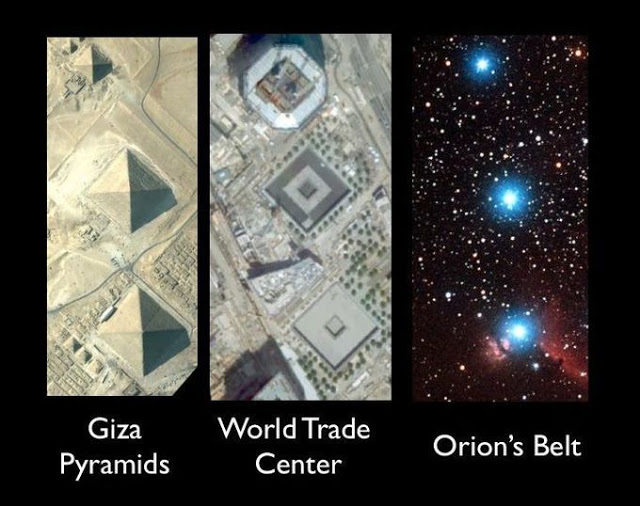 The Giza Pyramid Complex built by ancient of the Egyptians about 5000 years ago with wide area can be equated by distance of St Peter (Rome), Florence Cathedral (Milan) to St. Paul (London). It is believed also a collection of stones in the Pyramids of Giza that put together can to make for 3 meter high wall with a thickness of 0.3 meters that can cover all of France. When it compared to the Empire State Building of New York, this pyramid is 30 times larger and it can even seen from the moon. While the Ancient Egyptians themselves built the pyramid within 30 years. Not to mention the way of moving rocks and arranging them into high pyramids (some say making the slope or screw structure as in the screw which is then chalked with limestone on the outer layer, others mention that the stone is found). The Accuration of construction and center of gravity. As mentioned earlier there is a mention that Pyramid was built by ALIEN by linking it with portrait Pyramid on the Mars (Image Below). There are of other speculate  the pyramids were built by future humans who were stranded in the past. There is also a pyramid associated with the constellation Orion cluster seen from the location of the Catiga Pyramids Giza and the Mayan Pyramid is believed to have the same location and position based on the cluster of Orion stars. It is also believed that there is a room under the Sphinx (called Hall off Records) which is the secret key to Zep Tepi that is a golden age of the past when the Pyramids of Giza is made.

According the research of Scientists and Archeologist, Pyramid Raw Material is taken from several places. For example, limestone from Tura, granite from Aswan, copper from Sinai and wood for crates from Lebanon all of which are transported through the Nile. Then the average workers die at a young age of 30 because of spinal cord injuries because they carry very heavy loads. Then it was revealed that there was Emergency care for the injured workers.
Long time before any telescope let alone observatory, Egyptian society already has high astronomical technology. The pyramids and the Sphinx were the work of astronomy thousands of years ago. source
The name of Orion is taken from one of the figures in Greek mythology, the son of the god Poseidon (also known as Neptune) and Euryale. As a god, Orion was given a lot of supernatural powers by his parents. For example, by his father who is the ruler of the ocean, he was given the power to live in the ocean like a sea creature.

Between January and May, this constellation of Orion stars can be observed in the East. When the stars are drawn lines, it will look like there is a scene of a human being was brandishing a weapon. In astronomy, the constellation of Orion stars is formed by eight great stars of Betelgeus, Meissa, Bellatrix, the composition of the stars Mintaka-Alnilam-Alnitak (often referred to as Orion's belt), Saiph, and Rigel. Together with other small stars that act like the satellites. 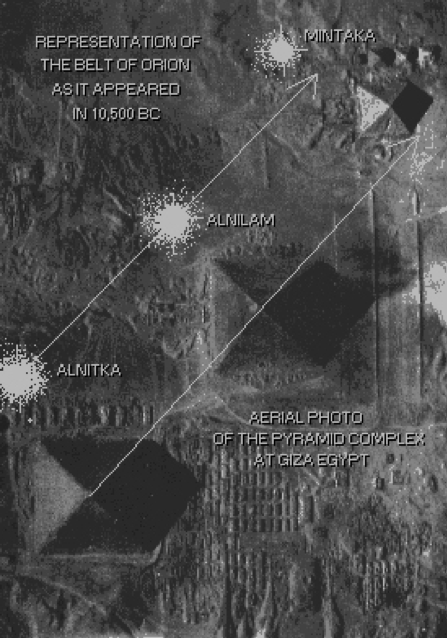 From the composition of the big stars and each satellite, when pulled in a continuous line, will be depicted like a dashing young man with a weapon. By Greek mythology is mentioned as the incarnation of Orion figures. Then to the south of Orion, there is a smaller constellation called Lepus. When the stars in the constellation are drawn a line, it will look like a dog. This constellation is mentioned in mythology as one of the dogs that accompanied Orion in the sky. It consists of two big stars (Nihai and Arneb) as well as stars of much smaller size. There a row of stars sometimes depict the figure of a scorpion, but can also be a bull. It all depends on which direction we look at. To be sure, the constellation Taurus or Scorpio consists of five Then what to do with the ancient Egyptian culture, which built the pyramid complex in Giza also over the myth of the constellation Orion? stars, namely Al Nath, Aldebaran, Hyades, Ain, Pleiades, and of course their satellite stars respectively. With the combination of the three constellations (Orion, Lepus, and Scorpius / Taurus), the mythology of Orion was created.

What is correlation of the Egyptian Ancient culture, which built the pyramid complex in Giza over the myth of the constellation Orion?

It is associated with the ancient Egyptian worship of Osiris, who has believed the Orion's is incarnation which later became the god of death. In the reliefs of the pyramids found, Osiris is described as a god who wore a high white crown. Through his miracle, Osiris can easily destroy the earth and its contents. Ancient Egyptians also believed that the gods in the sky must also have a stopover on earth. On the basis of that background, then the complex pyramids Giza built. Of course because for Osiris, the architecture of each pyramid position is made in such a way to be similar to the position of its constellation. Including building guard, the creature body-headed lion man. The Khufu pyramid depicts the star of Alnitak, the Khafre pyramid for the star of Alnilam, while the Menkaure pyramid as a symbol of the Mintaka star. The position of each pyramid is made as accurate as possible, resembling the position of the three big stars in the sky. And the placement of three pyramid positions is almost accurate! Just misses 0.1364 degrees from the angle between the pyramids compared to the interstellar. This is so special, considering the technology when the pyramids were built, certainly not as sophisticated now.

Although in Ancient of Egypt weren't the telescopes, the estimate of astronomical mathematics could be said very great, they could make pyramid formations in the constellations of Mercury, Venus, and Neptune stars, and this we have experienced in the year 03 December 2012. and the alignment of this star happens once In 2,737 years. great !!.

What a lovely information. I loved it!!