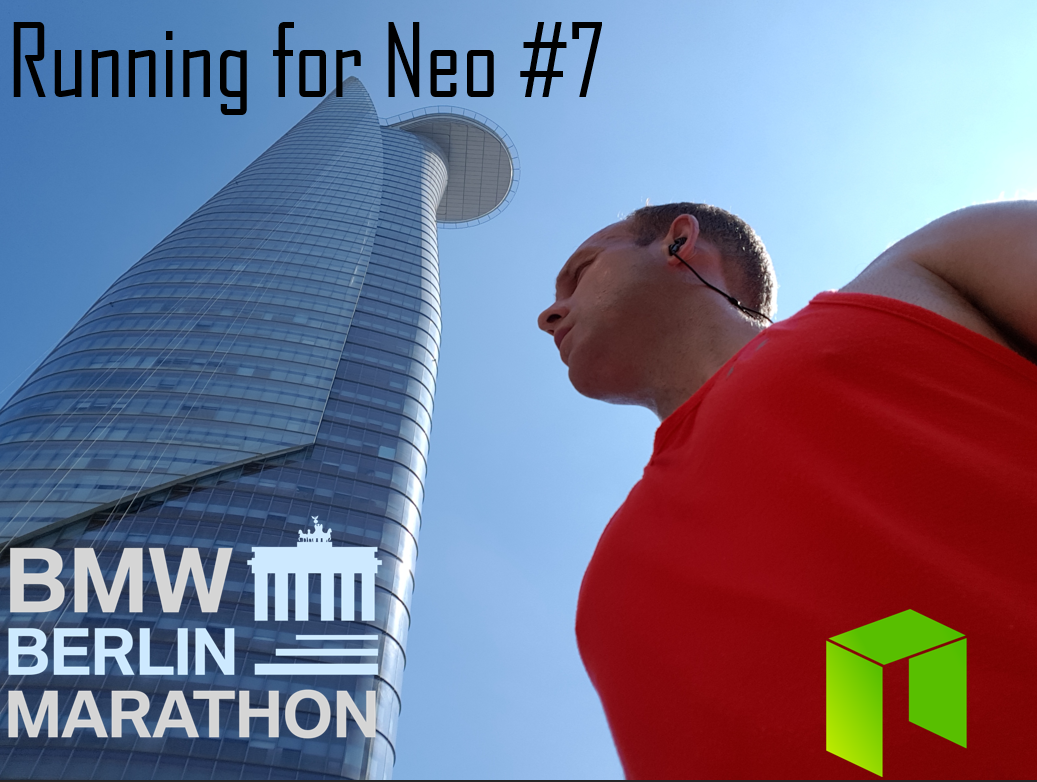 Dollar Cost Averaging Neo for every kilometer!
This year I will be running the Marathon of Berlin on the 16th of September. As an experiment I will be using a variant on dollar cost averaging, at which I will invest 1 dollar for each kilometer that I run in preparation of the marathon in both NEO and GAS. This will therefore be both a blog of both my runs as well as an exercise to see what kind of investment performance can be achieved by dollar cost averaging NEO.

Benefits of NEO's consensus mechanism
As of right now the NEO network is still centralized. In total there are thirteen consensus nodes right now and they are all controlled by NEO. As blockchain technology and more specifically the consensus technology that NEO is using is quite new, it may still be seen as a good thing that the consensus nodes still remain within the control of the NEO team and developers, this makes it far easier to make fixes to bugs like the one mentioned above and provides a fast and secure network from day one. However this is planned to change within 2018 when external consensus nodes will be added making NEO slowly, but surely more decentralized. NEO will be operated via a proof of stake (PoS) mechanism where a number of consensus nodes will validate the Neo blocks. NEO can achieve up to 10.000 transactions per second as the amount of nodes will remain limited, in order to still have a democratic validation process, Neo uses a protocol called delegated Byzantine Fault Tolerence (dBFT). This makes it so that all owners of the NEO token, will be able to vote for consensus nodes. The once receiving most votes will become consensus nodes, that will construct and validate new blocks. This also enables NEO to have what is called finality. Finality means that as a new block is proposed all the consensus nodes have to vote on the correctness of the block, if at least 66% of the votes are in favor, the block is final and its transactions cannot be reversed. This is important as with platforms which do not have finality forks can occur for instance if the other 44% in such a case would disagree, these other consensus nodes might decide to split of the main chain and start and continue on the new forked chain. Such forks would be very destructive for the type of smart economy that NEO wishes to support. Read more on this in my previous post on NEO. For these and other reasons detailed out if my previous post I remain confident in NEO's fundamentals.

Recovery run
Back to the run and the price. As today's run was 5 kilometers, I will be investing an additional 5 usd in both NEO and GAS. Today's prices are $118.89 and $35.12 respectively allowing me to purchase an additional 0.16 and 0.53 units. See you tomorrow at the recovery run! Follow me, resteem and upvote, if you like these posts.

Disclaimer: The above is not intended to be investment advice.

Running for Neo #4 (Total 43 KM, 198 days until the Marathon of Berlin) #runforsteem

Running for Neo #6 (Total 67 KM, Run through the center of Saigon)

Hi John - great article, and a very lucid breakdown of the whole situation surrounding the node-failure FUD. Nice to see the marathon prep is coming along nicely too. Today I wrote an article on what I think is one of the most interesting NEO ICOs in case you are curious: https://steemit.com/cryptocurrency/@cryptocontender/why-effect-ai-might-just-prevent-the-apocalypse

"Running in the snow has its own special qualities - softness, quiet, the white landscape - and it can make you feel like a kid again."
-Claire Kowalchik, The Complete Book of Running for Women

Thanks will do that.