An age of Medusa: the syndrom of overprotective mother enters politics

I've recently noticed this conundrum: religion is being simultaneously suppressed and protected.

And today this thought has occurred to me: religion is treated like a child.

Something that is too stupid to be listened to in any serious manner and too weak be left alone, so it needs to be protected.

And not only religion is treated this way. Also immigrants, young people at universities, sexual minorities, etc.

The 20th century was an age of man's pathology: father turning into an oppressive tyrant.

The 21st century will be an age of woman's pathology: mother turning into an overprotective monster.

Such monster has just one aim: to make sure her children are always dependent on her and never leave. It will always trade freedom for security. And it will divide the world into defenseless victims and predators.

This is what mothers do and it's perfectly fine when it's within limits and aimed at their own children. 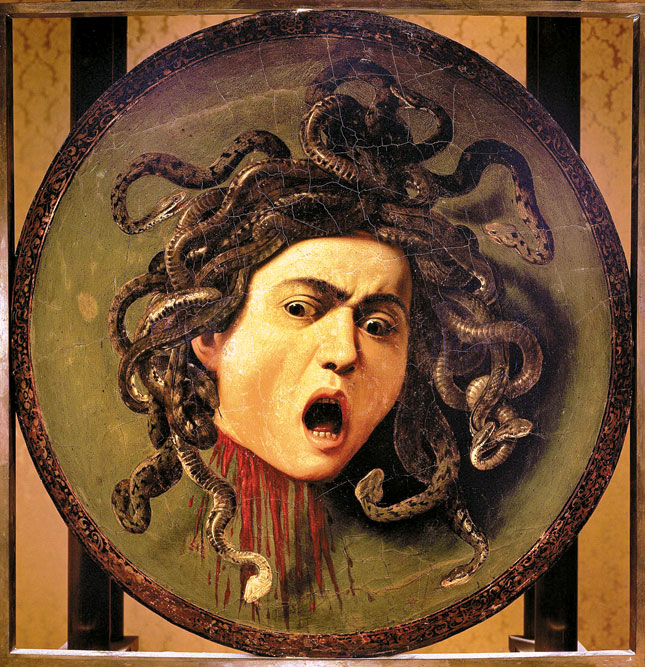 I'm sorry, but I am getting a bit angry here. Letting people have the right to believe in a very old and possibly outdated moralsystem is not overprotecting, its tolerance. But not letting them have a say in political and scientific descisions is intelligent. Everyday we evolve, we find out new things about this planet we live on and how it works. With this new knowledge, how can a twothousand year old book (or any religious book, they are all quite old) tell us how to behave today?
This is not about mother or father figures (I find that thought especially frightening as I am german), but about being finally able to formulate humanism instead of religion, to search for prove rather than to judge and to believe in the ability of humankind to evolve and adapt.

Letting people have the right to believe in a very old and possibly outdated moralsystem is not overprotecting, its tolerance.

Not letting me criticize them (and introducing legislation for that purpose) is overprotection.

But not letting them have a say in political and scientific decisions is intelligent.

OK, then where do you derive your morality from? Both science and politics need to have some moral axioms. You just make them up with your brain? It's been tried before and it ended quite badly.

With this new knowledge, how can a twothousand year old book (or any religious book, they are all quite old) tell us how to behave today?

You'd be surprised how adequate those old stories still are.

...about being finally able to formulate humanism instead of religion

It's possible to reconcile those two, humanism is not a replacement for religion. As Dostoevsky and Nietzsche perfectly predicted, the process of loosening up of Europe's christian foundations triggered quite a lot of bad events in the 20th century.

I derive my morality from one simple law: Could the way I act be made into a law for everybody. Or in other words: Don't do what you don't wish others to do. This replaces most of the ten commandments. Not all of them, for sure, but the ones I need for living a socially acceptable and henancing live.
Every religion stemms from a brain. It was a way to explain things humankind couldn't explain at the time. And naturally some of the laws they gave themselves to have a good working society still aply today, for example: don't kill. But others, for example that women are NOT equal to men, have been proven wrong.
I agree, that there can be difficulties during losing your religion, especially if you switch it with another kind of religion. Hitler and Stalin weren't religionless even if they didn't promote christianity. But I have to disagree that humanism can reconcile with religion. Humanism is about the belief in provable facts and the humankind being part of all living things on earth, to name it, we are just an animal like all the others.

Every religion stemms from a brain.

And sex is only a social construct. Right.

But others, for example that women are NOT equal to men, have been proven wrong.

This is exactly what I would like to criticize about some religious concepts but overprotective mother won't let me to.

I agree, that there can be difficulties during losing your religion, especially if you switch it with another kind of religion.

I think you understand nothing.

Hitler and Stalin weren't religionless even if they didn't promote christianity.

And I think you know nothing about your own European history. It doesn't matter if they were religious or not, what does matter is what caused that people started to gravitate towards such tyrants. It's the vacuum that appeared when christian foundations collapsed in Europe.

I am not an historian, so I won't compete with you there.
I agree with you on one point though, it is important to challenge those beliefs, to criticize their rules and to argue that not everyone has to agree with them.
I just don't think we live in the age of the overprotective mothers, but in a time where times are changing and we have to work on changing it for the better, and we have to do it together.

OK, let us agree that we disagree. Sorry if I've been too harsh to you, I did not mean to.

welcome to the euro-atlantic values, :| there is no space for culture, difference of opinion, public discourse on important topics, we do that for you, you can fuck off :)

Feminism and Multiculturalism are the two dangerous female Marxism of western society, in which the "oppressed" children have all the privileges but no responsibilities. These "minorities" are so overprotected they can do any act with no consequences. And the sad thing is that there isn't a Father figure in our modern society, it's been killed in 1968.

And the sad thing is that there isn't a Father figure in our modern society, it's been killed in 1968.

Maybe it's gonna change. I've found mine - it's quite possible that this man will lead the way. For me he is the first (as so far the only) man who is able to define what my western civilization is all about.

By the way, thanks for the support on the dana edwards article. I'm still being replied by Wikipedia Warriors , now they are talking about the Holy Inquisition. Can they ever talk about the present? History is a great buffet where they can cherry-pick the events of centuries ago, they can never see that western civilisation evolved from the mistakes of the past, but "others" didn't. Will they be ever able to talk about the "today" and not about "yesterday".

Yeah, that's what ideology does: it never gives you the full picture. Always only one side of the story.

The most worrying thing is that intellectually those are not stupid people. They know how to argue their case and can be very persuasive. For me they are like very smart zombies.

They attack you because in their eyes you're the predator which wants to hurt their "children". And the funny thing is the patronizing aspect: how disrespectful it must be for adult immigrants to be treated like defenceless babies.

In my opinion, immigrants simply look for peace in other countries because they can forget about it in their own country, but we need to treat them better than their compatriots? They can come but they also let them work!
Chodzi o równość.

The accessibility of content on the internet and the freedom and power with which dogmatic logic supporters put down religion and religion-based decision making as frivolous and possibly also frame young people, minorities, and immigrants as weak and oppressed groups of people is partly the reason for this.

Those who typically make religion-based decisions may think twice about expressing their thought-process and even cover it with rational factors, simply because they don't want to come across under strong fire of ridicule. After all, under strong firepower, most faiths are unable to be tangibly proven to the level that satisfies the average human being.

Thus, we see peer pressure suppressing the expression of groups of individuals even on the online platform.

I would recommend reading a bit of Carl Jung he writes philosophy about the syndrome of the mother and how it is subconsciously imprinted into the subconsciousness. I myself have had encounterings with these archetype traits.
Cheers and best of luck.

Yes, Carl Jung was an absolute genius. I'd put him on par with Charles Darwin.

About archetypes. There is no such thing. It is also obsolete idea created by philosophers who knew little about human behaviour. No one is born with some innate information about the world.

This is the product of modern education.

Please do not spam the comments with meaningless input. Write something non-trivial or nothing at all. Otherwise you'll end up being flagged, even if you're just trying to be nice.

It's true that some woman are overprotective and being too hard with their children. But do you really think that most of them behave like that?

I don't really know and that's not my point.

My point is this: the pathology of overprotective mother has spread outside family and entered politics. And that's a huge problem.

Read @dana-edwards' posts as an example. She is smart as hell, very knowledgeable, brillant mind I would say. But at the same time she plays the role of this pathological monster: her priority is to protect others and make them constantly dependent on this protection.

Congratulations @innuendo! You have completed some achievement on Steemit and have been rewarded with new badge(s) :

hey @ika497, Welcome to steemit, could you please contribute something, like read and spend some time here before you go reward crying to people? I'm going to turn into a dick if I continue seeing pointless comments an spam in the general and post promotion chat :) so please learn, then go about contributing something, technically your post is worthless, because you didn't do anything you hogged the space here, placing a link, bring in some context, tell us something about yourself, there are enough videos on YT, if you copy pasta them here we would have billions of posts and no rewards to spread, so I wouldn't upvote a video I've watched some 5 months ago, when the rewards aren't even going to the creator. CREATE, don't spill shit all over the floor, expecting some reward.

I absolutely agree. I'll do the flagging.