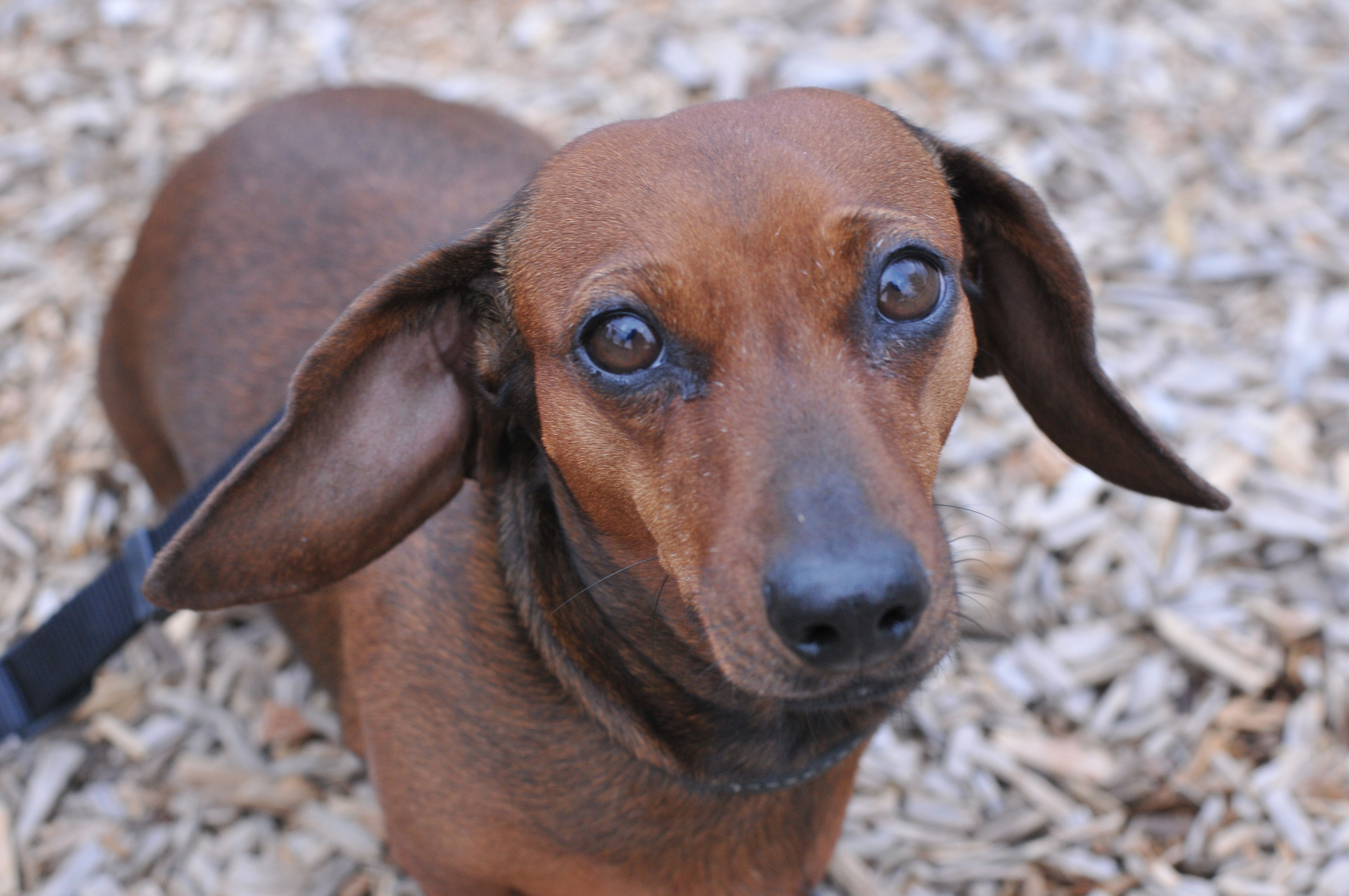 This is Lucy, our little miracle dog. Lucy is an 8yr. old dachshund. We came very close to losing her recently.

Our family had just finished dinner and we were all sitting around the table chatting. Lucy passed between our one-year-old Springer Spaniel and the Springer's empty food bowl, and the two dogs got into a tussle. Lucy lost...big time. (Normally these two play together non-stop.)

Lucy is a mini and only weighs 11½ lbs. Needless to say, she was no match for the much bigger Spaniel. We separated the dogs and Lucy ran off to one side. I immediately ran over to check on her to see if she was OK. As I lifted up her head, blood shot out from her neck in a stream, soaking the carpet. Lucy had taken a bike to the neck which had pierced her jugular. I knew immediately it was something really bad. Emergency training kicked in(I was an EMT in college) and I held direct pressure to her neck as my wife grabbed a dish towel to help cover the wound and soak up any extra blood. Within 30 seconds of the attack, we were out the door to try and find an emergency clinic.

I continued to hold direct pressure while my son-in-law frantically drove us 20 min into Boulder, CO to get to a night emergency vet clinic. He was new to town and had no idea where the nearest pet hospital was and I didn't have my phone on me. He asked SIRI and she guided us 20 minutes away to the nearest 24 hour animal hospital in Boulder, CO. There was a lot of blood but she stayed awake and alert the whole time. She stayed calm the entire ride in despite her obvious discomfort. I think she realized she was in bad shape and that we were trying to help her.

The first place we went to was not equipped for that kind of emergency. After a quick glance at the wound, they wrapped her neck with a compression bandage and called ahead to another local pet hospital. I continued applying direct pressure all the way to the next hospital. Ten minutes later we arrived. When we got there it was a relief to see that all of the doctors and nurses were prepped ready and for our arrival. I brought her in and handed her off to the emergency team. My hands and forearms were solid red, and my pants were soaked through with blood. I went to go get cleaned up while they prepped her for surgery.

I sat around for a while but eventually headed home as it was pretty late and they did not know what time they would actually begin. Around 11:00pm they put her under to fix the wound and to do some additional exploratory surgery. During the surgery, they opened her neck up with a ¾” incision to get in there to see if it was still bleeding, and to see what other damage had been done so as to determine a treatment. Fortunately, by then the bleeding from the jugular had stopped on its own and she did not require additional surgery to completely close off the jugular.

When bringing her back from anesthesia she flat-lined and the doctors had to administer CPR. I got a call at home from the doctor and she told me that they were performing CPR on her and that they did not expect her to pull through. With my family in distress, I drove solo back into Boulder,fully expecting to pick up my dead dog. To my surprise, I showed up to find her sitting up on the table. When she saw me, she got super excited and started wagging her tail. They kept her overnight for additional observation and assigned someone to be at her side the entire night in case there were any additional issues. We brought her home from the hospital the next day. The vet would have typically scheduled another operation to close up the wounds after they had had a few days to allow for the wounds to drain before closing her up. However, because of her adverse reaction to the anesthesia, it was decided to let the wounds heal on their own with no additional surgery, even if it meant a longer recovery. We brought her home and she was able to rest on a lap for almost two weeks straight. Thankfully my work allowed me to WFH during her recovery period. We later learned that the average survival rate for CPR on dogs in a clinical setting is about 5%. Her recovery went well. We spoiled her (and our other dachshund) with wet dog food until she was able to actually swallow without pain. Dogs are amazing and she acted like she was 100% better after about 3 days. She still had a gaping hole in her neck, so we kept her bandaged up for a solid 2 weeks until her neck wound had closed. She hated having her ears pinned back with the bandages but it was necessary. Her ears were just long enough to hit on the wound whenever she flaps her ears. I had to watch her very close for 2 weeks and re-apply her bandages about every 4-5 hours. She got very good at getting her ears out of the bandages and could do it in about 10 seconds if left unsupervised. The wounds eventually all closed up.

Lucy will probably live a very spoiled life from now on. We have learned our lesson regarding dogs and food.

Hindsight 20/20… We caused a dangerous situation because of where we placed the water dish, and by not isolating the dogs do separate feeding locations. We got soooooo lucky. Had this happened at any other time of day, we might have simply come home to a horribly tragic scene. Lucy and Bree(the Springer) still get to hang out, but only for supervised visits. We keep all of the dogs separated during feeding time and we no longer let the dogs ‘self feed’ all day.

We are so happy to have our happy little dog back. I seriously thought I’d lost her in the blink of an eye. She will forever be our little miracle dog. 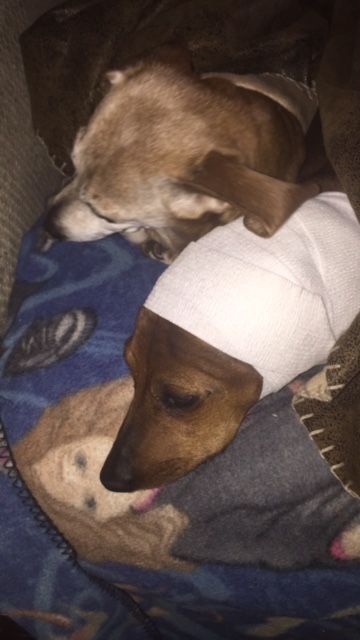 Lucy back at home snuggling with her 'sister' Lexie(14). Bree(the Springer Spaniel) was very worried once she was finally allowed to come down and see Lucy. She was very cautious and you can see the concerned look in her eyes as she peeks over to check on Lucy 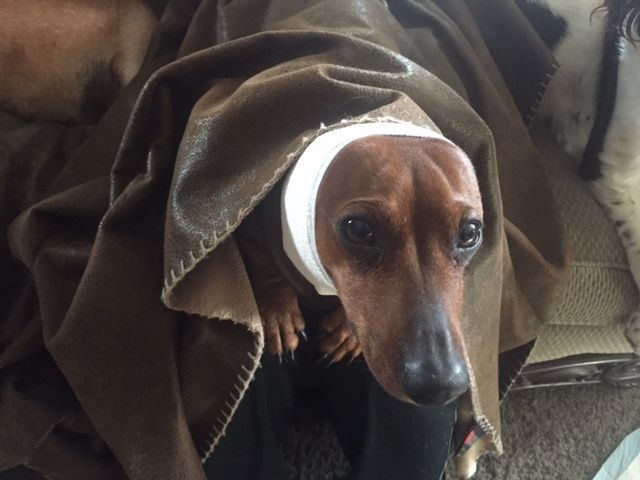 Lucy was a very good patient and since I was able to work from home while she recovered, she generally just slept on my lap. She absolutely hated having her ears pinned back, but we had to keep her from flapping her ears as they would hit her fresh wound. I experimented with wrapping her head in different ways but ultimately, she would figure out how to get out of her bandages in less than 5 minutes whenever unsupervised. I had to watch her very close for 6 weeks. 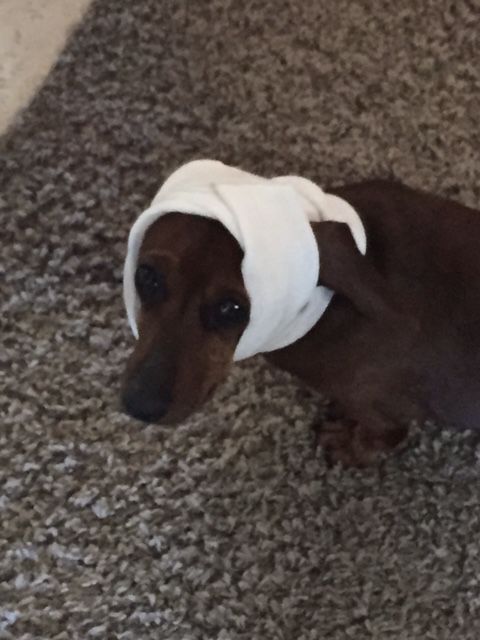 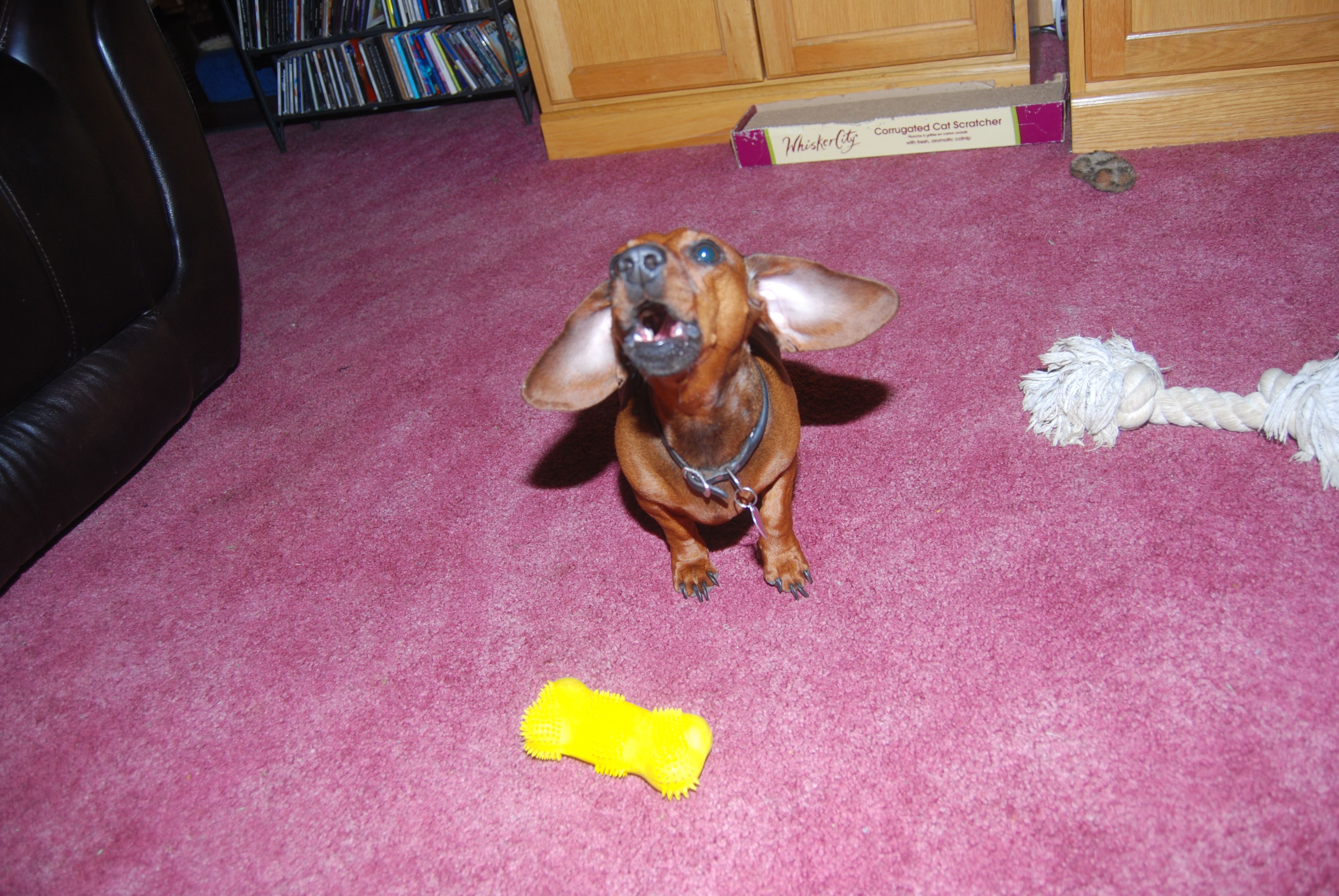 Lucy howling at me to throw her toy.

TLDR:
Our dogs got in a fight over food and our small dachshund got bit on the neck, piercing her jugular. She got surgery, crashed, got CPR and survived(only a 5% chance). She’s now healthy again. Yeah!

P.S.: I'm new here on Steemit.com. If you liked this post, please check out my Intro post and consider following me.
https://steemit.com/introducemyself/@rebele93/another-minnow-learning-to-swim-in-a-very-big-pond

The @OriginalWorks bot has determined this post by @rebele93 to be original material and upvoted it!

Awww poor lucy :( Me and my little wiener (Toby) are glad she's okay! Daschunds are great but it's a shame that they are so susceptible to back problems, Toby has been nursing a bad back for years now.

knock on wood, we've never had an issue with either of our dogs. We are very careful about not letting them jump from furniture, but you can't watch them at all times.

Yes we tried all we could and we have been using baby gates to block all stairways. Unfortunately he never likes to use the little doggy furniture staircase we bought for the couch/bed

My heart was beating hard for her! I'm so glad she survived!!! How traumatic. I give you my full upvote (not much) and resteeming. I'm sure those bills aren't going to be enjoyable when they come in.

I call her my velcro. Wherever I am she is rarely more than 10 feet away.

Congratulations @rebele93! You have completed some achievement on Steemit and have been rewarded with new badge(s) :