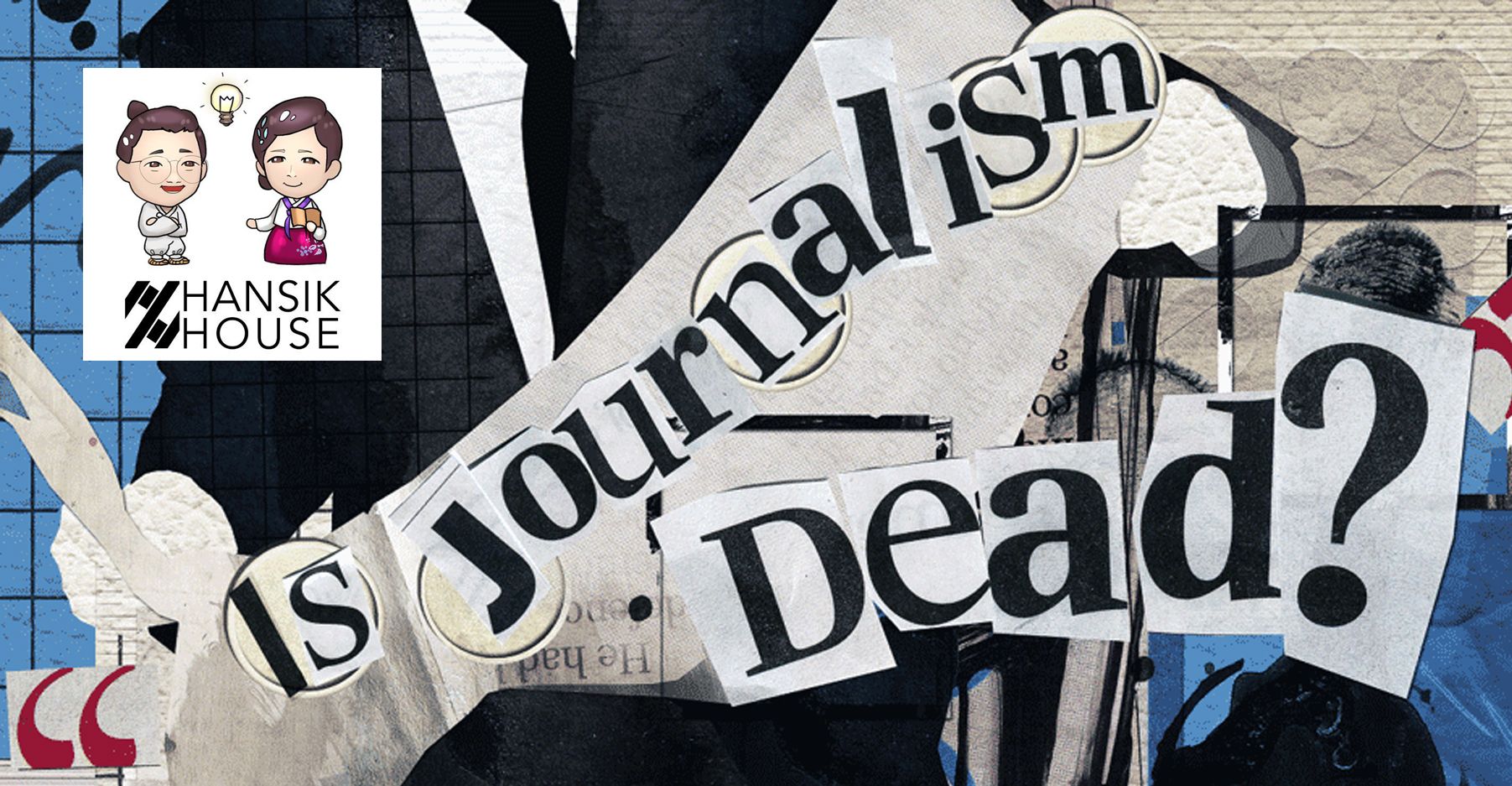 It kills me to do this again and again but it’s kind of like a comedian who cannot leave a ridiculous/embarrassing situation alone. I wrote this post a few months back, lamenting how much mainstream news has devolved into a strange mutant chimera of a gossip column, knee-jerk blabbering, and the ever so rare individual report that stands on its own two legs and doesn’t rely on Trump’s latest tweet. Whether you’re left or right-leaning, you have to admit that the domain of journalism is undergoing a crisis that threatens its legitimacy and standing in the world.

I try really hard, I really do, to give credit to solid journalism regardless of what channel it is broadcast from. We’re seeing more and more outlets basically choosing sides. This can’t really be helped as news companies become more corporate with political executives with great sway. People tend to shuttle into the Fox camp or the MSNBC group. They’re openly more critical of the other side and in a strange way, that makes it somewhat ok. What seems most ridiculous in this political climate is the last contender, CNN.

And despite how much I try, I can’t help but cringe everyday at the pitfalls of the network. Some days they go whole-hog on social-media. Sometimes they’re give never-ending coverage to an insignificant issue (anything with “Bieber” or “Kardashian” in the title). Others, they’ll published reports like the following that are no more digital mumble.

The one thing journalists absolutely need is a sense of accountability. When they report something that is mistaken or breach ethics of confidence, they should be pressured in rectifying the issue. Another sense of accountability can come from shame. And today I’d like to shame Chris Cillizza who came out with this embarrassment of an “article” which really amounts to no more than a pre-teen’s diary entry and I earnestly feel like I’ve wasted my time after reading it. The following are actually snippets of the piece - 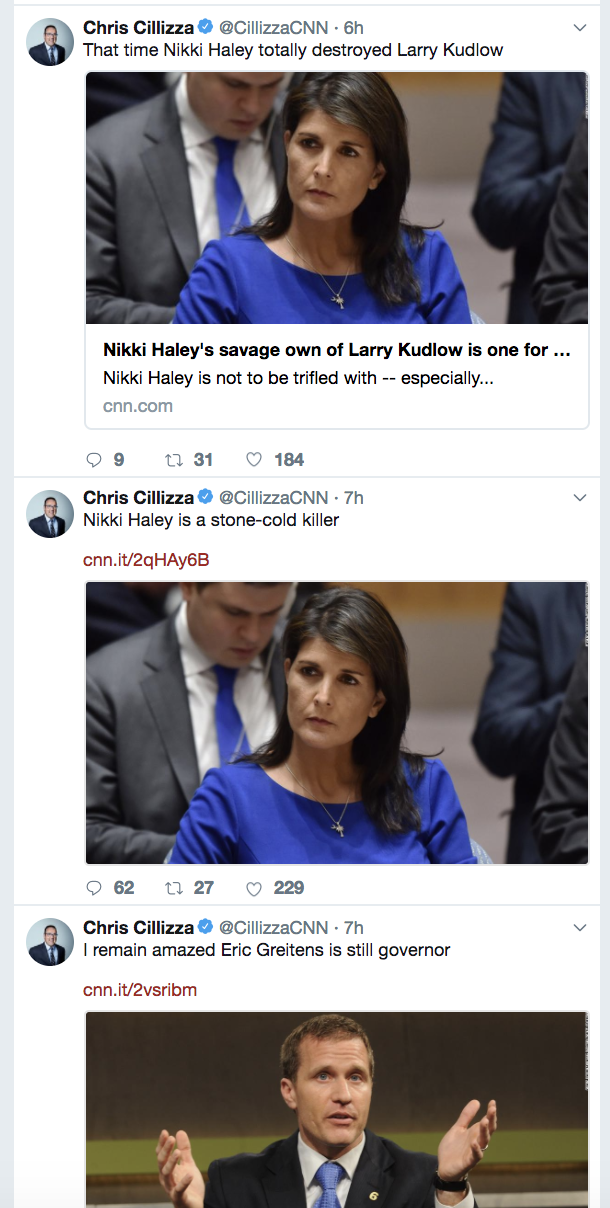 Personally, I’m very interested in the Comey-Trump tit for tat that has been going on since early 2017. The latest Comey interview was supposed to be a very revealing expose on the former Director’s dealings with the sitting president. Before jumping into the full video, I wanted a Sparknotes version of what occurred so I thought I would skim this article.

I’m a firm believer that a profession should uphold a standard that every actor should aspire to reach. The more professionals that fail to meet that bar, the less respectable the profession itself is.

I read over this “article,” then in disbelief, scoped out Cillizza’s Twitter to allay my fears that this man is little more than a gossip columnist for CNN. I was shocked by the sheer number of tiny little messages blasted into the world. I’ve seen Twitter-centric reporters before but Cillizza’s wall reminded me a pre-pubertine child with little more than a handful of classmates that are ‘friends’ with him on the platform.

I know I shouldn’t judge the crop from a view bad apples, but this is truly ridiculous. We’ve seen the nasty effects of social-media degrade at the professional foundations of journalism and it’s a sad state of affairs when you can’t distinguish between the Opinion section with the front page.

Transparent and Open-Source is a better Marketplace for Integrity

I suppose I should talk a bit about blockchain at this point. We’ve gotten to the point, after about 10-15 years of pure/inconsequential internet enjoyment, that everything is being mushed together in the digital stratosphere. News, social-media, complete falsehoods, speculations, and everything in between are overlapping at a rapid pace and there are very few tools that give us the ability to sift through the noise. Even on ‘reputable’ and dedicated platforms like CNN.com, it is very very difficult to parse apart what is objective news and what is dripping in bias and vindictiveness.

More and more options are becoming available in the blockchain space. Projects like CIVIL promise to make journalism less reliant on the massive corporations that mediate our news. A decentralized and transparent news system will make it easier for us to verify what is true and keep journalists 100% accountable.

I do believe that is an industry that direly needs a facelift and blockchain might just be able to provide that. Let me know your thoughts and experiences in the comments below!

You raise good points here. And you're a guy to talk, since you're actively working to improve the problem via good media like @creativecrypto

I think it's important to stay neutral and understand the WHY of this stuff. These stories dont get popular in a vaccuum - people are hungry and, like the audience for the ancient Roman bloodsports, they really will show up and spend their time/money if you give them something loud and violent to spectate.

The challenge that faces us is to understand how and why the "bad actors" (gossip columns, etc) are able to gain such incredible attention - and then to try and invent the new ideas, structures, and etc that enable the "good actors" to capture similar attention.

There's some danger in trying to fight this kind of gossip by turning into a citation machine, where you're technically right but nobody cares.

I'm right there with you. I don't blame the bad apples as much as the rotten tree. Any kind of news source is going to be torn between valuable information and what is going to attract the most eyeballs. Unfortunately, these tenets rarely align.

And you're right, nobody cares, thus no consequences for the firehouse of crap that just flows on without impediment.

For me the big problem is the closed feed-back loop between the journalists and their readership that is mediated by money.
Journalists need money to live, they get those money from people reading their pieces, hence they need to adapt their writing to maximize the number of people reading what they write.

It's kind of a Dutch auction with respect to quality because the bulk of the readership is interested in Bieber and Kardashian news. Thus the journalists battle to be THE BEST at exercising the worst instincts and the reptilian brain and the amygdala of as many people as possible.

Here is where a system like Steem, based on a "reward pool" from which the journalists are paid can help. But in order to not reproduce the same "spiral to the bottom" mechanics you need to have the reward pool being distributed based on how close an article is to a "Constitution of Quality".

Whatever we say the whole idea of "my opinion is as good as yours" is scientifically-provable to be bonkers. Your opinion is provably better than mine because you are smarter, better educated, more knowledgeable and I'm a stupid guy with the IQ of a cobblestone. The only thing we have in common is that we belong to the same species, but our cells harbour completely different gene combinations.

Thus AUTHORITY. You are an authority and I am not. You are entitled to say that "that content" is of higher quality based on clear criteria. And I should take it from you, because you DO know better.

This current era of "we are all equally bright and valuable and our opinions cannot be ranked in any way" is ruining the society. When push comes to shove, in order to advance, respond to a challenge or threat, make progress, if you say "to the right" and I say "to the left" there has to be some structure that says : "when in disagreement on THIS topic, your opinion prevails". And maybe on THAT topic it will be my opinion, and that's ok.

To sum up: reward pool distributed according to a "Constitution of Quality Journalism" (to the elaboration of which even the Kardashian-loving masses can be invited to participate)

This comment should be a post itself, thanks @sorin.cristescu! I hope someone can establish that exact system on Steemit.

I am surprised at the quality and quantity of certain things that are in your article. In the world we need more people like you. No hairs on the tongue people with the truth ahead. Excellent diary very interesting really everything you say and fills me with euphoria read everything that is happening. I declare your fan I hope you keep sharing these details of life. Successes and blessings.