The Basics of ICON ($ICX)

ICON is a platform based in South Korea; they have a working blockchain and an ambitious road-map for 2018. Their primary goal is to interconnect between different blockchains, but they will also have ICO’s and smart contracts similar to Ethereum (5 ICO’s ready to go starting on April 2018). The interoperability space is getting saturated with too many projects right now, but ICON is specially positioned to succeed, they already have a working blockchain and partnerships with real-world companies including banks and universities in South Korea as well as connections with the Korean government.

The fundamentals are solid and very likely ICON is going to do great in 2018. In this article, I am going to focus on price action. The idea is to develop a game plan to take advantage of market movements to maximize accumulation of $ICX. Even though this article focuses on $ICX this ideas should be a good model for any crypto project with strong fundamentals.

ICON initial coin offering price was $0.11, it entered the market at around $1.6 and had strong bull run that culminated at $13. The subsequent correction took $ICX back to $1.6 and right now has recovered to almost $3.5 after being added to the main South Korean exchanges (Upbit and Bitthumb).

Using NEO as a Model

NEO had a fantastic performance in 2017. Similar to ICON, NEO is a blokchain platform from Asia, they are both from highly patriotic counties, and both seem to have deep connections with their respective governments. Additionally there are similarities on their road-maps (Mainet launch, start of ICO’s at some point in the year) and cult following. For this comparison I will consider NEO price starting at $1. In the above chart, you can see the three main cycles of NEO price, the percentage of growth, percentage of correction and how many days each part took.

The next bull run was 740% with the most significant part of the movement lasting around ten days. It corrected 77.6% in around 120 days.

NEO final run took place on the last “ALT” season, it ran over %602 and it has corrected (for now) at around 74% I should be near the end if $BTC stays stable.

Correlation Between NEO and ICON

So let’s try to figure out where ICON is right now compared to NEO. The first ICON pump took place in a total of 25 days with an increase in price of 1196% and a very steep correction of 88%.

We just had a small recovery run, and we are probably entering the accumulation stage before the next pump. If we were to compare $ICX with NEO’s historical chart, would be around here: 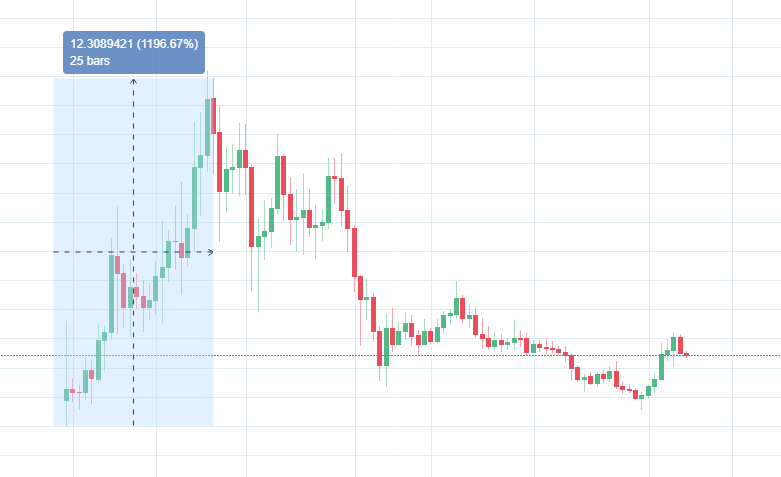 What we can Learn From NEO

NEO had very swift movements that were initially shorter in time and got extended in each cycle (5, 14 and 60 days). In the case of NEO the first movements were precipitated by news (re-brand, government connection speculations, etc) and the last movement was precipitated mostly by ICOS, general support of the community and the “alt season”. After each movement there was a subsequent correction of at least 70%. Accumulation stages seem to be getting longer as well. If NEO where to continue in the same pattern next top would be $370 but it may take a long time.

My Action Plan for $ICX in the Following Months

If market conditions allow, there is a significant move coming for $icx at some point in the next two months. If NEO is any indication of how much it will grow It could potentially go as far as $30 or $40 or even more in the case accumulation is extended.

I plan to take profits one or two times on the way up on the green zone, and I will take up to 30% of my position in total ICON depending on the aggressiveness of the movement. If the growth is slow and steady, I will not take any profits, hold and wait for a fast and robust move.

Hints that may indicate is a good time to take profits:

The pump is rumor related.

BTC at all time highs, or correcting right after.

I will then buy back between 50% to 65% retracement to be on the safe side, probably will set a few orders on the way down. I think the next big move will probably start on Mainet release or will be based in further advance of the road-map but new partnerships can come at any time, and the ICON team has proved to be very smart and always waiting for the best market conditions for news releases.

Hints that may indicate is a good time to buy back:

Rumors prove to be untrue or disappointing.

BTC is pushing the market down.

Any type of FUD coming from Korea

It is very easy to say “buy low and sell high”, but we all know that the feelings involved in trading and investing in cryptocurrencies can be overwhelming. For that reason, I wanted to develop a set of rules for my self to take advantage of the volatility while reducing risk to the minimum.

To be clear there is no actual correlation between NEO and ICON, Most probably ICON will not behave the same way as NEO did in 2017, this is a thought exercise designed identify trends and educate myself in order to take more rational decisions during high volatility times.

ICON may perform in a totally abnormal way depending on the circumstances, keep you eyes and mind open to all possibilities, these Ideas are just a guideline but remember “the map is not the territory” and follow the Bruce Lee Advice “be like water, my friend”.

It is also important to mention that the total supply of ICX is way bigger than NEO. If ICX gets to the same prices I will end up having a much bigger market cap than NEO. Many will think this invalidates this whole thesis, but this is crypto, most retail investors don’t even look at the supply (see Ripple and Cardano).

I would love to hear opinions on this, I put it together to gather my thoughts, but I figure it may be useful to others and I’d like to read to what others think about it.

Lastly I am not an native English speaker so I expect I messed up all around, Let me know If there is something I can correct and I will do so gladly.

DO YOUR OWN RESEARCH I am a random dude from the internet. Make sure you own up to your decisions and take responsibility for any trades bad or good. I have no financial background and I am not a financial adviser (Never even finish my BA, and it was an art degree anyways ).

Thanks for reading and good luck in your crypto journey.
CryptoMcKenna

Congratulations @cryptomckenna, you have decided to take the next big step with your first post! The Steem Network Team wishes you a great time among this awesome community.