Growing up in music : Part I

This is my journey in music. The ups and downs. Or perhaps I should say the exhilarations and the devastations. Hello and welcome to my first ever post! I can't put it all down in one go so, with your patience, I'll write it in a series of blogs. First, I'd like to introduce myself. I come from a very small island called Malta where everyone is raised to play an instrument but few are truly encouraged to take up music as a profession. My instrument was piano and I was taught by my grandma, Elsie. She was known for being the life of the party, performing classics for all her friends to sing along to. My grandad, Godfrey, by her side singing with his untrained but beautiful tenor voice. This was also our yearly Xmas family ritual. Standing around granny Elsie at the piano while aunts, uncles, cousins, brothers and parents sang along. Which is why Xmas changed completely when she left us. It was quiet and awkward and for a couple of years I was encouraged to take her place. So I would play some classical pieces I knew in the hope that we could drown out our loss, cover up the silence. But let's go back a little. 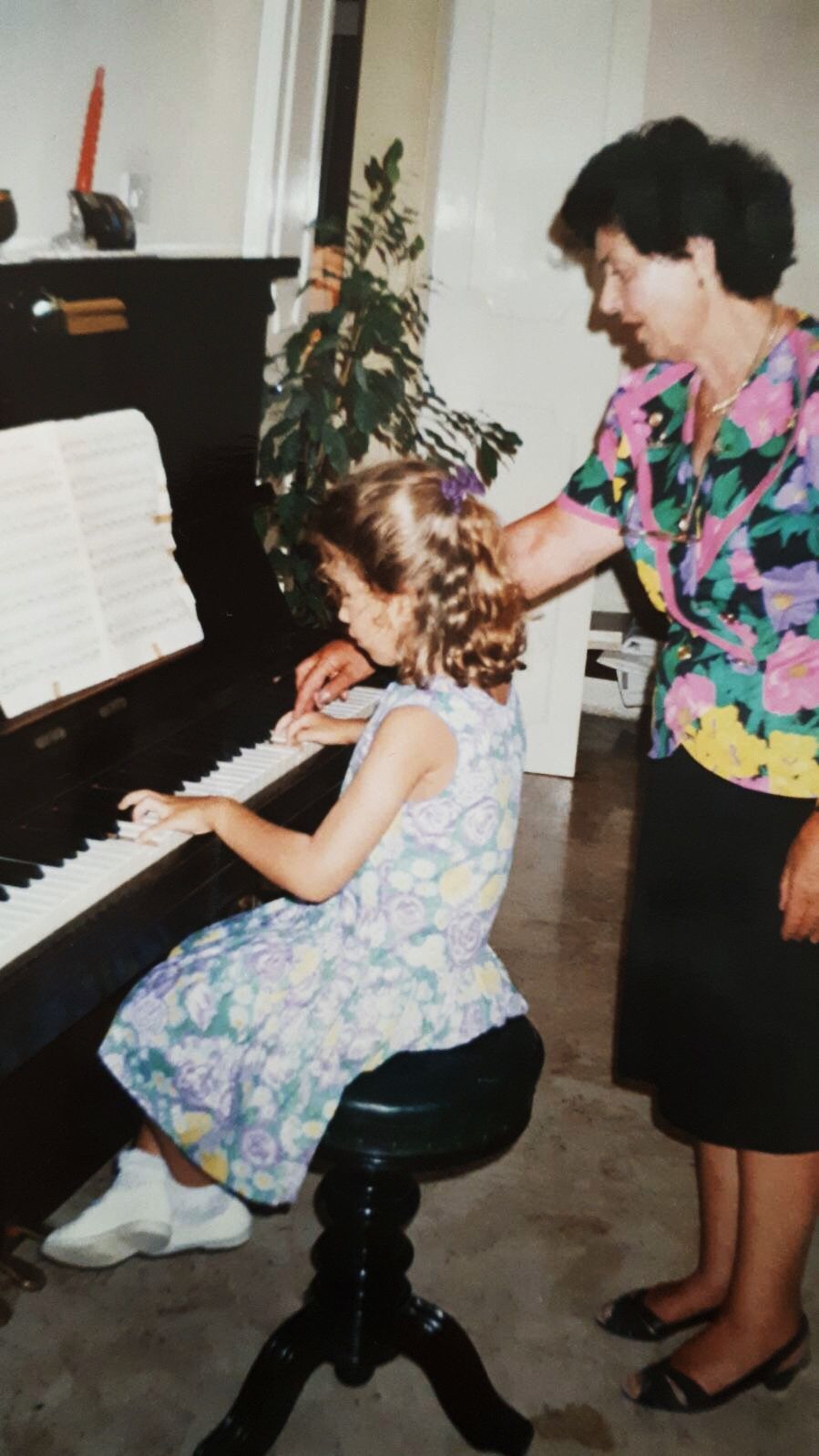 Listening to Elsie talk about living through some terrifying times such as WW2 used to hold my attention (and my imagination) for hours. She had witnessed her house being bombed only to find that the only room that survived was the piano room. She described it to me as if the piano had been untouched. Practically glowing. As if it were a sign from above she continued to practice in this bomb site whenever she could. I believe it was her way of defying the war. When it was all over she devoted her life to music and family. Enter grandpa Godfrey (the man with glasses standing next to Elsie on his right): Of course this is a later picture of them but it's how I remember them most. Just imagine a handsome young man who speaks around 4 languages and can be very very charming indeed. Elsie said it took quite some persuasion and several failed attempts before she agreed to date him. I can totally imagine it!! She was a tough cookie. In those days it was rather unusual for a woman to be working. However, since her father had not granted her permission to become a concert pianist she decided she was going to at least become a piano teacher. My mother often hints that growing up she hardly remembers a time when Elsie (her mother) was not with a student. It must have been difficult for her. This is probably largely why she was not too happy when I told her I wanted to be a musician. 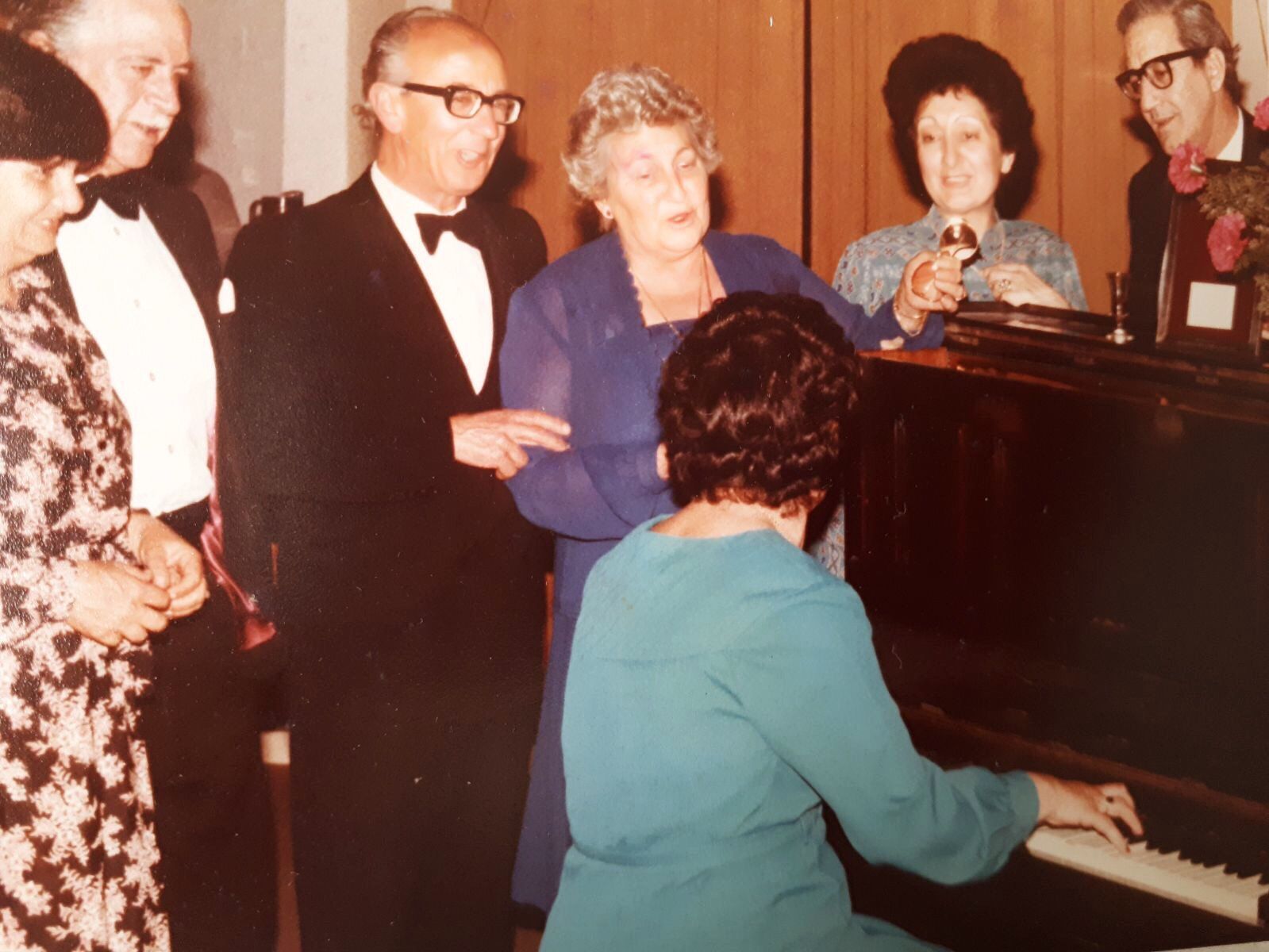 But of course all I saw was how music in Elsie's life brought people together. I could only see the happy smiles and hear the merry voices singing along to the classic tunes of my grandparent's era. It felt like a very key part of a whole. The thread that joint their community together. This blog is probably my way of never forgetting the part that music has played both in my life and the life of my family.

To be continued x

Congratulations @yesplease! You have completed some achievement on Steemit and have been rewarded with new badge(s) :

Hey! Your account was recently created so I am very glad to see that you're actively posting. One upvote from me and we're all waiting to hear more from you!
As you are new to steemit and it can be hard for newcomers to boost their steem power so maybe you want to try @MinnowPowerUp where you can earn up to 30% more steem power than just directly powering up! It's a subscription based daily upvote bot that draws its power from a delegation pool. I also recently made this post explaining my experience with it in more depth while earning over $1 per day in upvotes.

Congratulations @yesplease, this post is the seventh most rewarded post (based on pending payouts) in the last 12 hours written by a Dust account holder (accounts that hold between 0 and 0.01 Mega Vests). The total number of posts by Dust account holders during this period was 4105 and the total pending payments to posts in this category was $957.18. To see the full list of highest paid posts across all accounts categories, click here.

Congratulations @yesplease! You have completed some achievement on Steemit and have been rewarded with new badge(s) :

Welcome to Steemit @yesplease a great introduction, and I will be looking for the continuation of this post. I wish you the best, and will see you around.

Thanks @inthenow! I'll be posting again in a week. I'll come check out your posts too :)

Have a love day!

Welcome. I never quite took the piano. Still want to learn. So how is it you guys are encouraged to learn when you're young but swayed away from being musicians when you're older.

Hi @geechidan! It's never too late to learn piano. I've seen people pick it up pretty quickly in their adulthood. It just depends on the level you want to achieve.

Very good question by the way! Malta is a very small country (population 500k) Plus it's an island - so kinda cut off from everything. That and the fact that our education system is very intellectually driven definitely become factors. Lack of opportunity on the island is another but artists like myself are moving to other countries where music is more esteemed to make our own opportunities :)

I hope this helps. Have a great day!

Got ya. I understand, so it's an economic empowerment type of thing. Music isn't the going to pay the bills necessarily there. I understand.

Hi is nice that you love the piano good!

Hey! @yesplease, Thank you for sharing this beautiful story of your Grandmother and her love for music. Will look forward to reading your future post. :)