A Swedish pal of mine heard me talking about Dimmu Borgir one day and said.... "you should check out Arch Enemy."

Again, i'd never heard of them. Like most of the best things in life, my affection for this band came from recommendations from pals. 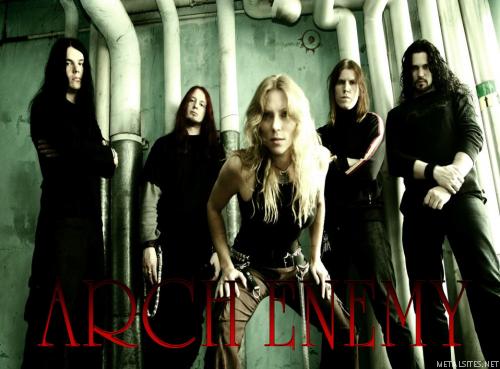 Im not trying to be misogynistic, but i really didn't think a woman could belt lyrics in a death metal band so i was apprehensive to check these guys out....... but wow did Angela Gossow prove me wrong (I might have spelled her name slightly wrong - attempt to correct me in the comments, even if you are wrong, to show me you are not a bot and that you know how to read.)

Angela is no longer the singer of the band and the jury (mine) is still out on if i like the new singer or not and the direction the band is going in. Time will tell, as the legendary glam band "Nelson" once said.

Anyhoo.... "Ravenous" (live in Japan) is featured below and good gravy can they put on a show. I've seen the entire DVD and it is just amazing; they do everything right as a band.

I liked them from the start about 8 years ago and perhaps i will continue to... just not so sure about the new singer yet... I think her name is Alyssa?

I hope you like them and as always please point out my spelling mistakes and be as rude as possible when doing so :P

No corrections at all @gooddream, I guess I will stick your spelling just like @emmakkayluv.

So I decided to check this band out, and it really did blow my mind as well how Angela Gossow did belt lyrics in a death metal band.

Thanks for your post, I am sure gonna be on your trail, Coz I do music as well.

thanks pal. I'm glad you liked them and i'll check out your music posts as well.

Sir very nice music ... I am your big fan ..Resteem This Post .sir

Thank You, it will be my pleasure!

I wish I can be that rude in correcting you... Lol
But I don't know the correct spelling of the name either... Lol
So I stick to your spelling (Angela Gossow),I hope somebody bail us out here... Lol

How can you correct what you don't know it's wrong 🙈🙈🙈

I will try and see their video when I got home , you are not the only one to enjoy their talents...

your well-thought-out comments always make me smile pal. Have a great day.

Thanks for the compliment sir, it's better not to do it than to do it anyhow.
That's my motto when it comes to commenting and posting.

I'm glad my style of commenting gives you that joy. Your heart for people is something I would like to copy too.

Angela Gossow is correct but backwards it’s Wossog Alegna. IDK. What’s more concerning is the fact your comments section is being infiltrated by monkeys. Everyone knows monkeys are cute but will throw poo with no notice. Who Flug Poo. Used to have a tee shirt that said that. Strange thing to have.

YOUR A TERRIBLE SPELLER!! One of the worst I’ve ever not met. ;-o

good job on the reply. You ticked all the boxes. very creative response! :)

this arch enermy band has evolved from a raw and rough death metal to a much more melodic heavy metal that is practiced nowadays. In fact, he has never hidden that his favorite guitarists, and main influences, are such classic guitarists, "seventies" and melodic as Michael Schenker, John Norum and Uli Jon Roth.

Alissa White-Gluz (current singer) The "new" singer is only 32 years old and is Canadian but of Lithuanian descent this band if I have heard is very good.

i think you know more about them than i do :)

yes .. this band is among my favorites

The truth is that you are not the only one surprised that a woman can sing this style of music. I think it's excellent that you share very diverse things and with the calm spelling, we all have mistakes and what mistakes.

Used to be a big death metla fan but fell off it for a long time, this woman has sparked me once again. *pig squeals*

Wow finally, I was waiting for you, as I asked, more metal post, thank you, thank you. The best of the best

This is uncalled for, I just corrected somebody about what you are repeating. This is my original work you are stealing for crying out loud. And you don't even perfect it. Lol

Try to be real, you will be rewarded, it doesn't take you time to read through the content.
If you don't know, you are not on steemit only to right, you are here to read too if you don't balance the two, you can't grow.
This is not a treat, but to help you, you might end up been flagged if you do it out there.
Hug.....

How can you correct what you don't know it's wrong 🙈🙈🙈

Dear, friend, try to be creative in your approach to commenting, I know you are new to steemit that's why you did what you did and that's why I'm taking my time to tell you what's right. I don't count it against you. But you have to be original to avoid been flag from other users.
Plagiarism is not allowed for any reason on steemit.
Look inwardly and tap into God's given talents in you, you too can come out with something good.
Hug, welcome to steemit.

these are bot automatic both @us007 and @doool , he replies the same in all publications, they are spammer

I remember that it will be good

Congratulations @gooddream! You have completed some achievement on Steemit and have been rewarded with new badge(s) :

One of the sickest bands around! I used to listen to them ages ago.

Arch Enemy is my favorite band I'm in love with her vocalist, I did not want to bother but I'll leave a link of a cover that I made of this band and I really hope you like it since I'm new and I would like to know your opinion about my voice.