When it comes to early financial independence, everyone is always looking for a shortcut to get there. However, in the rare occasions when the market actually does gift us a golden opportunity of a lifetime to help us turbocharge our progress towards the end game, we oftentimes insist on refusing the help and elect to carry on "the hard way," instead.

It is only with the benefit of hindsight do we ever look back and say:

"Damn, that was so obvious! How on earth did I miss that?"

But here's a universal truth when it comes to making big money over the long-term:

"When in doubt, stick to accumulating as many high quality tier 1 assets as you possibly can!" Although there are too many asset classes out there to name, for this discussion I'm going to keep things extremely simple and confine things to hard assets, my favorite and preferred investment vehicle to making money. Point blank -- Seldom does anyone go piss broke betting on the highest quality hard assets, especially if you can buy at low prices below the historical mean.

For example, when real estate crashed after the financial crisis of 2008, everyone and their dog had the opportunity to back the truck up and load up on the crème de la crème. From around 2009-2013, it was seriously Blind Dart Investing where there was a supersale across the board and it didn't matter what type of property you were looking at... They were all selling for pennies on the dollar, and in many cases 50% less than their most recent highs.

Sure you could have bought anything and made out like a bandit, but I do truly believe that the absolute best gains made were from those folks who "lucked" out and bought the highest quality tier 1 properties.

The gifts that keep on giving!

In a downmarket, why bother wasting your time on junk assets when you can target the absolute best stuff out there on the cheap that will become the most highly coveted prizes in a recovering market?

Just look at how crazy real estate is right now and the ludicrous amounts of money that people are pouring into the tier 1 properties!

But here's the catch with real estate -- It's a highly cyclical market that goes up and down.

Most investors have it all ass backwards, which is why they struggle to get ahead with making significant progress towards early FI.

And perhaps the biggest flaw of all with real estate investors is that too many of them never know when to count their blessings and call it a day. I see this shit all the time with my friends... Real estate is the most addicting drug out there, so when the best assets are no longer affordable, these same crazed folks still feel the desperate need to get their fix, so they go elsewhere, chasing after mediocre properties, as an alternative.

These people are major deal junkies and they are hurting themselves without even realizing it.

I was guilty of that myself... I could no longer muster enough downpayment for tier 1 Bay Area property, so I rationalized that it would make sense to step outside that market and settle for junk assets out of state, instead. Whatever I did, I refused to quit investing in real estate... It was just way too much fun and I was hooked!

But I'd like to believe that I've learned a lot from my mistakes and moving forward I don't want to make the same dumb fuck moves ever again!

Screw mediocre assets! That is NOT the path to early FI and building wealth.

Give me the best stuff, the Class A properties in the best locations all day everyday or I don't want to bother playing in the real estate arena until it becomes a straight up buyer's market again.

Yes, you better set high standards for yourself, or you're going to get duped into buying garbage that'll set back your progress towards early FI instead of moving it rapidly forward.

Here's another mistake real estate investors make -- They naively believe and feel convinced that there are no other worthy asset classes out there worth their time and hard earned investment dollars. Sadly, when you don't take a macro approach to investing, you stand to miss out on fortunes in other asset classes that for all intent and purposes are basically the exact same thing as real estate (but far more liquid)!

You want to buy something high quality that is cheap today, so that somebody will be willing to overpay you a great deal to own that same asset, tomorrow.

I mean, check out commodities: gold, silver, zinc, lead, uranium, etc. Even the clean energy stuff: lithium, cobalt, copper, nickel, etc. Most of these hard assets have been ensured in a brutal bear market for the last 5 years!

Check out the HUI/Gold ratio: 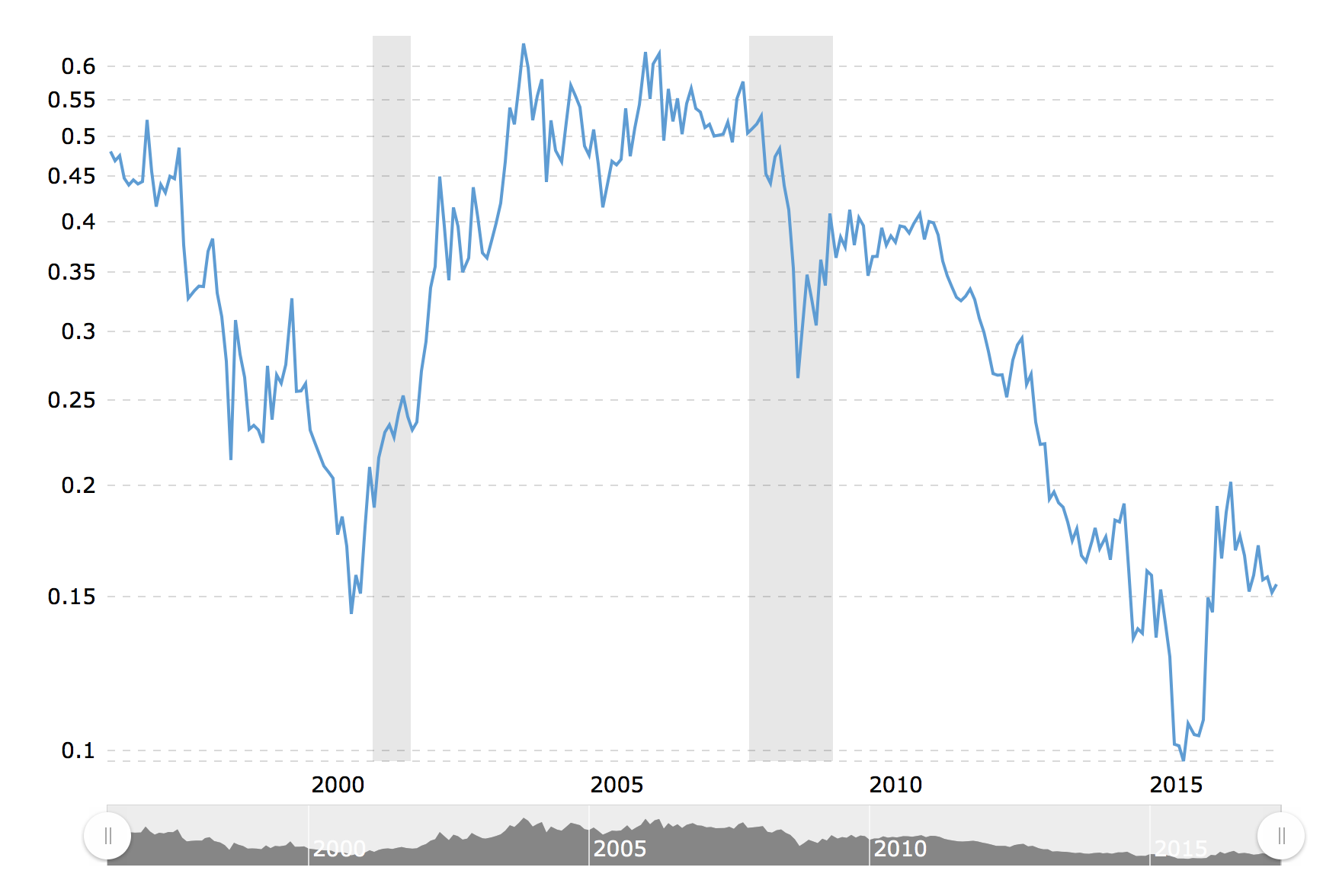 For real estate investors, this should feel like deja vu all over again! Imagine if you could rewind the tape and go back to 2009-2013... Just how many properties would you have tried to "back up the truck" on in places like Silicon Valley?

Damn, how I wish I was even more aggressive back then with my tier 1 real estate buying!

But now is that HUGE window of opportunity that is available to everyone again today! Seriously, real estate is not all that much different from commodities; hard assets are hard assets and you don't fail long-term when you chase after tier 1! Yes, I often get crazy with my own portfolio and I make way too many trades, but I'm really trying to learn discipline and to stick to the very principle and belief of focusing on acquiring the best stuff.

Just like with real estate, I want to make sure I'm stuffing my portfolio with high quality gems that will be the apple of most everyone's eyes when the sector inevitably recovers.

Let's be real here -- Gold, silver, copper, and all those other metals aren't gonna stay down in the dumps and depressed forever and ever. Real estate investors should seriously realize this truth better than most... When these metals finally bounce back, it will be an epic surge like no other...

So why not "buy low" and get situated in the best tier 1 stuff when nobody else gives a shit and you can actually have a field day buying up all you want with almost no competition? Then, when commodities become all the rage again, you can exit stage left (or right if you prefer) and sail off into the sunset with massive profits sitting in your bank account.

That's what I've been trying to do these last two years!

Recently, I added shares of NexGen Energy (NXE) which is a uranium explorer who might just so happen to control the finest and highest quality uranium discovery on the entire planet. Uranium is hated right now, but one day it will have to recover since the world isn't waning off of nuclear energy and it actually is used to power 20% of homes in the United States (who knew, right?). So, I'm buying up shares of NXE, which to me is like having the same wonderful opportunity of being able to buy up SF real estate at 50% off, or more... I am damn confident that someday someone will come knocking on NexGen's door and be offering lots of $$$ to buy up their high grade Arrow deposit, which is spectacular, and one in a million.

Next, AVZ Minerals (AVZ.AX) might be sitting on the most massive lithium deposit in the world, so I've been trying to accumulate shares of that company as well. You know, lithium, a commodity that will be in HOT demand moving forward into the next decade as electric vehicles start to become mainstream. The Tesla Model 3 was just released this past Friday evening, so as far as I'm concerned, this game is just getting started!

2 years ago, I bet big on Ivanhoe Mines (IVN.TO/IVPAF) and boy did that speculation pay off for me, rising up about 400-500% by the time I started to offload the bulk of my original shares. It sounds crazy now to say it, but not that long ago most everyone thought copper was going obsolete and wouldn't be needed by human civilization anymore... Copper was crashing to $2/lb, and everyone was screaming to avoid base metals stocks like the plague... Again without the benefit of hindsight, nothing ever seems obvious. 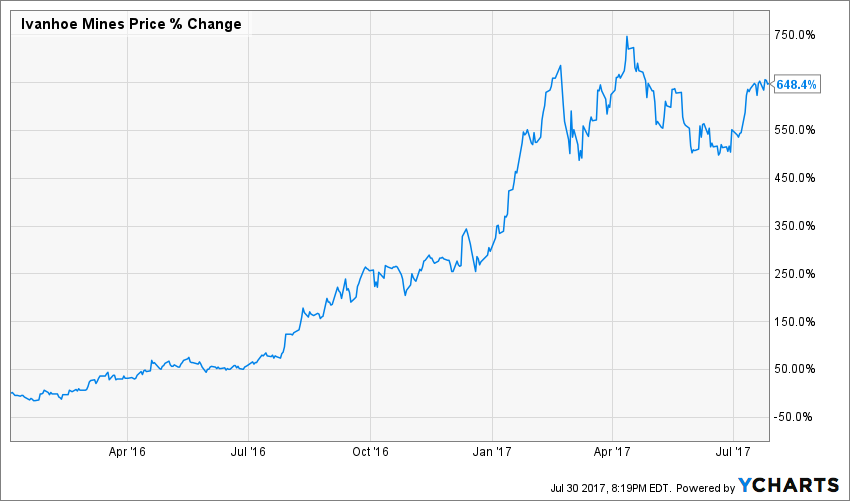 Nevertheless, whether we are talking about real estate, gold, silver, copper, lithium, cobalt, whatever hard asset you want, when it comes down to it, just give me the best damn stuff on earth at below fair market value and I promise you I will do my best to load up as aggressively as possible.

I want to become wealthy!
I want to make a boatload of money!
I want to achieve and sustain early FI for perpetuity!

Everyone wants the same shit out of life.

But how many are disciplined enough to do what it takes to get there?

There are shortcuts in life, but they only present themselves once in a blue moon. When the tide turns, you gotta know to turn with it. Opportunity comes knocking seldomly, but when it does, you have to be open minded and willing to listen.

So, I've been a busy bee trying to get well positioned in the highest quality tier 1 hard assets yet again.

Most real estate investors think I'm insane and beyond help at this point...

All I can say is -- Go ahead and keep chasing real estate at record high prices, with valuations up in nosebleed territories. Go ahead and lower you standards mightily and continue gobbling up mediocre assets at overmarked prices...

Personally, I don't believe that's the best path to early FI and building wealth, so I'm deviating from that approach of buying regardless of rain or shine.

Hard assets are hard assets, as far as I'm concerned; I don't discriminate, but I do care a great deal about the price I'm willing to pay!

Just give me the best tier 1 stuff at a discount to fair value and then and only then will I be eager to play your game.

Early FI is NOT a straightforward path; most people will never get there b/c they continue to fixate on the wrong things.

Bottom line -- You want to own the best tier 1 hard assets on earth at the best prices possible. From 2009-2013, without a doubt real estate was the place to be to make some serious money. From 2015-present, it's all about commodities.

"Keep an open mind and always strive to learn more. That's how you build conviction in your investing ideas."

"Roll with the punches, be cognizant of where we are in the market cycle (never forget the macro), and know that it ain't gonna be easy every step of the way."

This is how you get to early FI ASAP!

Thanks, Jay! I've been a fan for awhile and appreciate your blogs. Lots of good information you put out there for anyone to check out. I especially thank you for Ivanhoe! 👍$$$$$