KasiaRecommends: TED – the amazing world of "ideas worth spreading".

Today let me take you to the amazing world of "ideas worth spreading".

I was surprised that there were still people among my friends and colleagues who didn’t know TED. I am more than certain it is crucial that people are educated and open-minded! This is the only way to avoid manipulation and raising upsetting tendencies.

So it is high-time to invite you to inspiring world of inspiring people and facts! 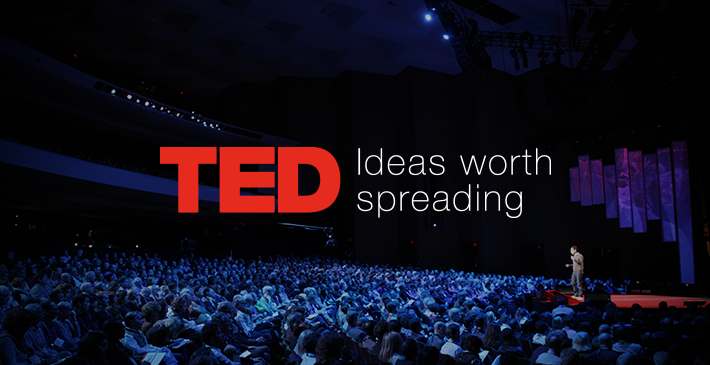 When I first read that at the beginning TED was a conference interested mostly “just” in technology and design, I was amazed how beautifully unpredictable some projects are. Since that time TED became a world phenomenon! Nowadays it is a place that gathers all kind of topics – technology, entertainment, design, business, science, and global issues being just the most popular among many categories.

But let’s get back to the core and allow me to explain what TED is.

TED is an acronym and stands for the “technology - entertainment - design”. It has various projects, but the one that ordinary people profit the most is an internet platform where TED “talks” (meaning lectures that last from around 5 to 20 minutes) are available to watch for free!

A first conference bringing together technology and design took place in 1984 but ended up as unprofitable. A few years had to pass until the founders decided, in 1990, to risk again. This time it worked and became an annual thing. The most significant difference between then and now is that at the beginning the participation on the conference was restricted to people with invitations, which means it was very exclusive and limited. Today events are either for free or you need to purchase an entrance, but nevertheless, they are open to the public!

In 2001 an entrepreneur and visionary Chris Anderson acquired Ted and the company rocketed creating various projects in order to broaden the accessibility. This is what he said:

It used to be 800 people getting together once a year; now it's about a million people a day watching TED Talks online. When we first put up a few of the talks as an experiment, we got such impassioned responses that we decided to flip the organization on its head and think of ourselves not so much as a conference but as "ideas worth spreading," building a big website around it. The conference is still the engine, but the website is the amplifier that takes the ideas to the world.
source

This so-called experiment was a project from 2006 to put the first and most impressive TED “talks” on the internet in order to make them available to the broader public.

The first six TED Talks were posted online on June 27, 2006. By September, they had reached more than one million views. TED Talks proved so popular that in 2007, TED's website was relaunched around them, giving a global audience free access to some of the world's greatest thinkers, leaders and teachers.
source

This is where you can find those six talks: The first six TED Talks. They do not age!

Among them, you will find an absolute must-see, by Sir Ken Robinson. This talk, called “Do schools kill creativity?” sadly is still as important in 2018 as it was back in 2006. The speaker highlight why the education system undermines creativity d that an alternative must be put in place! It is the first talk to reach 10 million views. You can watch it here.

How to start?
All you need to do is to enter this page. From there it only gets easier;) You can search for a particular talk. You can browse talks according to a topic that interests you. The talks are also available in various languages, so you can look for some inspirations in your native language. The last category is the duration, from short 0-6 minutes talks, 6-12 min, 12-18 min to speeches 18+ minutes long. What I find very helpful, especially for those who are on the platform for the first time, is that the talks are as well categorised into smaller chunks and labelled: most viewed, jaw-dropping, funny, persuasive, courageous, fascinating, inspiring, beautiful, and informative. This gathers podcasts from different topics that share the same “idea”. It allows you to be surprised by the topic you would not normally choose to watch.

Apart from an immense database of TED talks that took place during conferences all over the world for the passing years, TED offers many other possibilities to share the “ideas worth spreading". One of the most important is that the conferences are being organised, in most cases once every year, in major cities in various countries. Those venues gather speakers that are locally recognised and are the place to be for open-minded, creative and curious minds.

Some of my latest recommendations:

I know about TED for a long time and once it was my dream to speak at TED and then later I thought it was very easy lol
I am surprised to know that many of your friends didn't know about it. Thanks for the info you shared about its history and acquisition by an entrepreneur.

it is easy indeed! if you have something genuinely belonging to you, it will come out of your mouth like a remembered childhood song!

this is my personal experience!

first I thought it will be hell difficult! but the first time I started preparing, i realized it would be piece of cake, and it was.

haha, lucky you, you don't experience stage fright? :) Thanks for your insight!

thanks Kasia,
I loved the “Do schools kill creativity?” talk.

there was a personal reason this Ted Talk was special for me, cause I have a 8 month old baby, and the education system is the key problem I think over and over.

I was studying articles on the net, about the "experimental learning" which every child has in him/herself; and the orthodox school system that ruins it!

I also read a lot about the changes Finish government did around year 2011, I recommend you to search for.

I actually have heard about the changes in Nordic countries, i admire their courage to be in avantgarde!and what are your thoughts? will you do home-schooling?

I won't quit the whole school system since it's crucial for socialibity skills for kids, but i will do my best to reduce the impact of schools on him that brings the stress of grading and numbers!
Your kid needs to discover his or her real talent.

oh, i really hope you will manage to do that! and then please share with others how to do that! :)

Thanks for your kind comments 😍❤ you can see my son here:
https://steemit.com/life/@honarparvar/spend-more-time-with-family

TED is great isn’t it? When I got to know it I spent days watching one talk after the other. Might be a good experience be in their venues - thanks for your post!

i did exactly the same - binge-watching haha:) i felt so blessed that i discovered it, i was happy like a kid!

I put your post in my curation highlights of the week!

@k-a-s-i-a - TED talks are very educational & I often learn about things I would have no knowledge of. Some people seek out knowledge, to use for their own benefit or the benefit of others.

Other people don't seek knowledge, and are left in the dark in my opinion. I try to share knowledge with people and that is one reason I am on Steemt. But, some people you just can't reach.

It's accessible and free for everyone. but you will not force anyone to open his/her head. Good luck on Steemit!

Ted talk has been around for pretty long ago. It's really surprising that many people still have no idea its existence. I still remember that TedKL has been around my university giving some really inspiring talk to students, helping them to find their way in entrepreneurship, and widen their perspective of the business world.

such a nice souvenir! thank you for sharing it with us! :)

after we follow Ted step what we have to travel .. I never know in common with E-money but I failed .. do you know about E-money
@k-a-s-i-a

I am sorry but i didn't understand your question :)

They did ban Graham Hancock's speech on psychedelics for some unknown reason though?

I didn't hear about that to be honest. But was he banned by TEDx? cause i imagine that each city has a significant autonomy...

I love the fact that TEDX caters for the motivational, educational, and financial needs of humanity. It is a must follow for everybody that wants to be successful

for everyone who wants to be successful or stay open-minded and inspired :)

So when will TED talks feature you as a guest and what topics would you like to address on that forum Kasia?

haha ;) i don't expect that to happen soon ;) but that would be a nice perspective, thanks :)

Great post and one that may change a few peoples lives... orr at least their outlook on it. Thanks

Tedx is a house of motivation.

Guys, help us to succeed on Binance and get a reward of 200 #WPR if listed! Vote: https://www.binance.com/vote.html
Sign up for #bounty here: https://goo.gl/JbF3uY & fill in “Bounty report” when voted: https://goo.gl/SWDNyw
Let's win this!

Nice Post, I will upvote you!
If you want more votes you

can read here / https://steewit.com/steemiteducation/@goldendawne/upvote-exchange-on-steem-follower-lacking-categories-and-time-to-boot-it-up-here
about Upvote exchange and other things!
$0.00
2 votes
Reply