Shortly before my 30th birthday, I got an early surprise: A trip to the ER.

I spent 3-days in the hospital.

It was a mix of pain meds, IVs, and rest. They said I had pancreatitis and I was at risk of some very serious troubles if I hadn't come in (along with problems that would eventually spring up... like cancer). 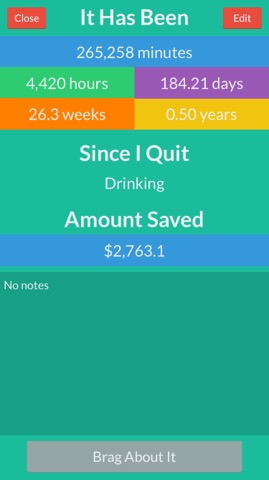 Those 3 days were the absolute worst.

It was a combination of shakes, no appetite, irritability, and hallucinations. I thought there were times when demons were coming in an out of my room (but turns out it was the nurses).

I got home and had long discussions with my friends, family, and girlfriend.

I vowed I wouldn't drink again and here I am at 184 days. I've saved (literally) thousands -- I was easily drinking between $15 - $30 worth of cheap booze/hard alc a day then going even harder on the weekend. In total, I was downing about a full bottle every two days. A lot of the days I'd drink two large bottles of wine along with about 10-15 beers.

It was a job to stay drunk, basically.

Here's what happened when I stopped...

The first couple of weeks I could barely sleep. I'd stay up 36-48 hours because my body was super wired. Plus, every time I started to doze off I'd have terrible hallucinations and sleep paralysis. I was able to get some sleep because of the meds they provided but even then it sucked.

They put me on a vitamin regiment, too.

I also had to take Omeprazole to keep my stomach acid in check because I was vomiting like crazy + it could spur pancreatitis.

Turns out I was getting a rash around this time.

I did a bit of reverse engineering to figure out it was the magnesium so I stopped that.

I was about a month in and things were going great. My energy was up. I was able to stay focused on projects. Memory was coming back. My appearance was improving. All-around, I felt amazing.

I consider each day I don't drink a win.

Since then, I've taken on new projects (freelance work), got back into reading, lost a bit of weight, paid off a credit card, started back on paying down my student loans, and traveled a bit. I've even gone to parties without any troubles even with people drinking around me -- I keep thinking "If I start this it'll never just be one beer... it'll happen all over again and that's not worth it".

I wanted to share this because I've only kept it to my close family and a few friends. It was a demon that was on my shoulders. I was a functioning alcoholic. And I don't ever want to go back.

For anyone going through these troubles: YOU CAN DO THIS.

So, so much better.

Submit
$0.79
5 votes
1
Authors get paid when people like you upvote their post.If you enjoyed what you read here, create your account today and start earning FREE STEEM!
Sort Order:
[-]
jasonbu (60)  ·  2 years ago

@droogie, I've found your post to be worthy of a resteem and upvote from me. I'm an actual person and I am doing this on behalf of the Resteem - Upvote movement. Each day I pick a worthy post, upvote it and resteem it. Join the movement, pay it forward - read about it here: https://steemit.com/steemit/@jackmiller/a-call-to-arms-beat-the-bots-the-movement P.S. Keep posting, and commenting and you will do well. Looks like you had a lull and are back at it. Stay with it.