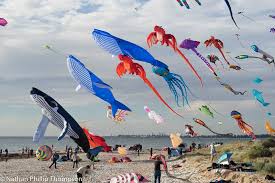 This festival is organized every year in Weifang, China's Shandong province. 80 thousand people gather at a local stadium on the occasion of the festival's inauguration ceremony. An additional 40 thousand plastic chairs are in the basement of the stadium. The participants of 40 countries joined their kite festival. The 10 thousand dance artists displayed their dance performances. In addition to this traditional kite, there are modern small and big kites. At the end of the festival, many kites will be in the Weifang Kite Museum.

The water below the sea looks very nice and the fish look very nice, I find this post very good to me

Congratulations @tasmia! You have completed some achievement on Steemit and have been rewarded with new badge(s) :

@masumkhan420 - You clearly realize that "beautiful post" is considered to be spam since I've replied to you 45 times before so I just gave your comment a 45% downvote*.

@tasmia - You can remove this comment and everyone can whitelist me from appearing in future posts.

*If you continue posting in this way, I will continue flagging and the weight of my downvote will increase each time I reply until you stop. Please reply if my algorithm is mistaken.