Here's my minnow gripe about steemit This has troubled me about my interaction of 130 plus days on steemit 🤔🔔💡 I have created 379 posts I have 409 followers and I have a reputation of 40 ☺️😎⭐ if it wasn't for @steembasicincome mostly my posts would be worth less than $0.02 💸⚠️✍️📸 I seem to be being asked to buy influence at almost every turn in order to receive value in steem dollars and steam power🔌💸😐 I've even had my bandwidth throttled! what's up with that?🚂🚒🚀 my dreams have gone out the window💭💼👫🎹🍦🎂

I would propose that any data is valuable to the network because it is data and processing that the network feeds on😋🍔🍑 it's true that a user uses processing power to interact with the network🔌✍️👷‍♀️ it's also true that in doing this they create data ℹ️💁 this to my mind equals things out♥️♠️♦️♣️ data creation equals processing power 🔌🍔☺️ then what remains to be paid for? The answer is the work 👷‍♀️ℹ️✍️🔌😎💰

My creativity has sharpened and my ability to write has clarified greatly since I've been on steemit ✍️🔌😎💰 that's worth a lot 💭🚀🤔on other social media I was reposting posts, here on steemit I am creating my own articles and graphic art🎨🎭 that's exciting and I've grown as an artist by interacting with this network👷‍♀️🎨🤔

there's a kind of funneling of creativity towards a certain kind of Direction/influence, that causes the subjects of posts here on steemit to be similar in order to be successful🤔💰😎 as an artist I resist Direction and influence in order to express and have the power of conviction🔌✍️🎨 jumping through hoops in order to prove ones value is a manipulation😎🍦🤔 even when it's couched in reward 💰🎂🍦

I completely agree that the current system is bad for growth, newbies, and the platform as a whole. Resteemed

@lildebbie (33) having been here only a short time, and feeling to be at the very beginning of understanding what it takes to be successful here, it might be premature to draw conclusions about the whole system emoji Network spider web interaction with other networks and cryptocurrencies, I'm at both once worried and inspired by the idea that interacting with the network shapes my behavior to be similar to others, while at the same time making me more creative and inventive in my own post musings writing and art emoji artist palette paint brush typewriter computer interface 👋🎠💛 it seems I've use the answer to your comment as a jumping off point for a new article so I thank you 4 the inspiration share and upvote ☺💡☺️ 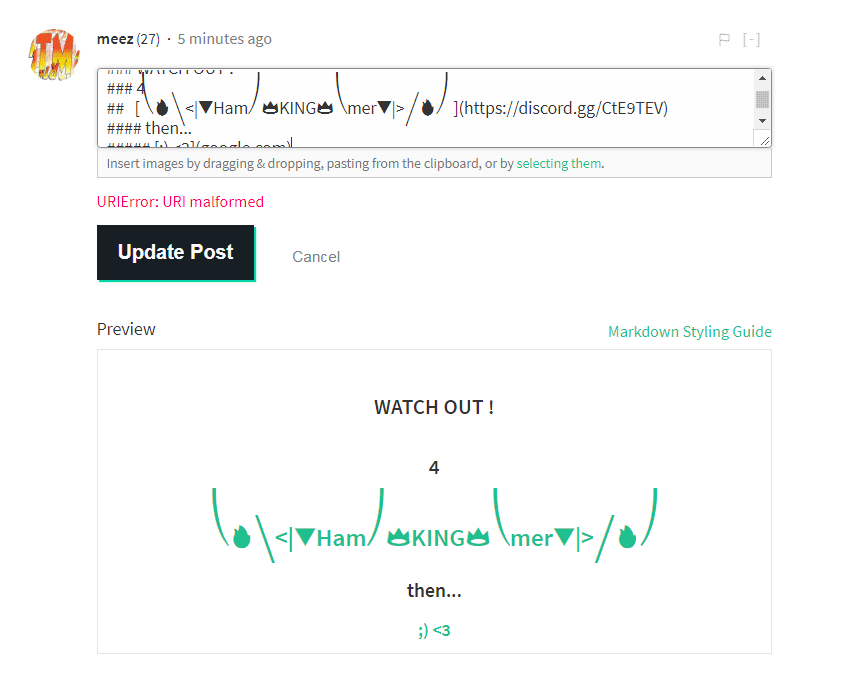 The first thing steemit needs to do is get rid of flagging. I haven't seen it used for anything but whales attacking minnows so they can get even more rewards and stifle criticism like what happened to @erebus

The one reposting shit is that spammer berniesanders. And he is raping the reward pool while doing it. If you ever wonder why your posts doesn't make more money, he is why.

I don't agree with this one. Without flagging we wouldn't have any tool to fight the bots, spammers and scammers.

But if they can use it too then how does it help?

The million dollar question... Maybe there is power in numbers who knows. I'm counting on the fact that the most of the people using this blockchain are real humans, and not bots. We should keep it that way.

Keep grinding!!! There’s light at the end of the tunnel. Your emoji skills are 👌🏼 : )

@tinylayla (42) thanks for the comment it seems that when enough people see through the illusion of the barrier to the light, then light will shine through Emoji smiles rocket ship Cloud blowing wind spirit guide animal smiles

He means the first thing that steemit should change is that posts should make money for ever, not just the first 7 days.

@lildebbie (33)what do you think? should the payout continue? what about edit and resteeming?

I'm not sure how the site actually works so I don't know if its feasible. But I would like if posts could make money forever. I think it might help grow the platform too.

@ meez (27) I'm inclined to agree with #PayOutPeriod2BEternal but I find myself wondering if the reason that it was put in place has to do with an ability to scam the system? Is that correct? What are the consequences? In fact even if there are negative consequences I think that probably the positive ones out weigh them? What do you think? When I was a newbie I supported that idea too. Now that I've worked almost a year without a break I'm finally breaking even so I'm actually becoming accustomed to having the pay period being only 7 days. It just means I can't become lazy and post just once a month instead of once a day.

I really like this post. It hits to the heart of how I feel as well. It's disheartening when you write an original song posted on D sound and nobody listens to it or upvotes it and you know it's a decent song. Very disheartening

@acousticsteveo thanks for the comment ☺️ I think a social media site could be run in a similar manner 2 how it was done in Marshall brain's book Manna... Each month you were given an amount that you could use 2 invest in projects you agreed with, travel or buy things for yourself 🤔 since everyone got the same amount everyone had the same amount of power 🔌 while projects could still centralized power for their purpose by allocating their value much like it's done here on steemit🎭🚀

@acousticsteveo (37) Hi again, when I answered your comment before I'd just read a great article about Marshall Brain's book Manna and so it was overwhelmingly in my thoughts, when what I meant to say is that sometimes to the minnow it seems like steemit is like a private club full of people speaking a language you can't understand with a purpose that is purposefully hidden, and so I feel for you bro☺️

@luiscordon (12) thanks for your comment though I'm not sure what it means is that a wallet address?

He is a spammer and scammer

@zenkly (59) Perhaps I could have understood that by his reputation score is that correct?

Yes, If someone is below 25, possibly because they have given him flags for bad behavior in steemit

@zenkly (59) one more question, I've noticed that when I go to my wallet my reputation says 25 and not 40 like it is on my blog. Is there a reason for this? Thank you for your help smiles

That is not more than a bug. You do not have to worry about it.

@zenkly (59) my older and wiser friend, is it bad form to put a wallet address at the end of a post? Or is this acceptable?