To be honest I have not read any white papers. Really, I have no idea what this coin does and what is good for. Not one IOTA. Sorry I had to throw that in :) Well, I do know that when it moves, it really moves. And that's good enough for me, since it can be a great trading instrument.

I had written about plans to go long on 001-IOTUSD and 004-IOTUSD. Last time I mentioned breaking above 0.31 & holding it would 'start cooking with gas', ripping through prices above. It broke above it late yesterday and currently it is sitting at 0.40.

There's a major resistance line (shown in red) at around 0.456 area, expect it to stall and retrace a bit. That's where the potential trade can take place. I missed the entry, again, so not chasing but letting it come back to a better price.

The most natural entry area would be around 50 to 61.8% fib retracement. Given the quasi parabolic way IOTUSD ripped, it would not be surprising to start bull flagging at 38.2%. I would consider that an aggressive entry, and as always would wait for further price development along with price action to determine if the hypo is still valid.

So what am I looking for? 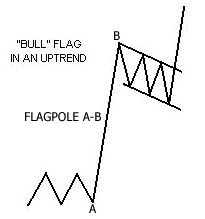 I am waiting for it to consolidate in a manner that looks like a bull flag for a continuation of the trend. I will update further when this happens. Usually I trade altcoins with BTCUSD as an 'indicator'. Well, some altcoins are already starting to make their move without the Bitcoin. A quick glance at BTCUSD shows things are about to happen, once it breaks above 2900 & hold.

2900 is a resistance level on the daily. Above this, I believe 3000 would be a temporary pit stop before heading to 4000. And that would provide extra fuel to the alt coins.

EOSUSD is another one I have been keeping an eye on, currently I am long but will provide an update on it on a separate post. I try not to inundate my blog with any trading idea possible, but to look for the best setups on Bitfinex trading pairs. So this post is an update on previous trade ideas since they have been on the same trend, and the basics of the idea is still intact, even if the short term price action did not.

Be sure to have trading plan in hand before entering any position. I am not a financial advisor, but would be glad to have a look at your trading plan and let you know what I see from my side. Until my next post, Happy Friday :) 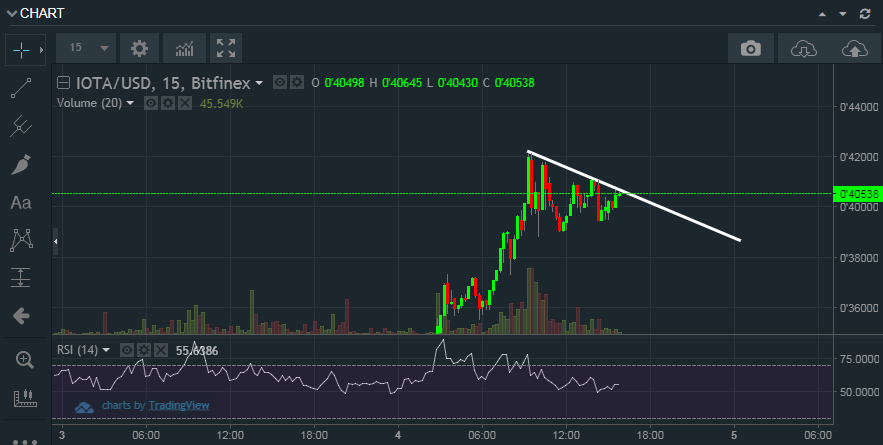 Bull flag formed, buy signal at the break of the downtrend line (white). Looking to scale in with SL right around 0.386 area

I invested into IOTA for the same reason as yourself, when it goes, it goes! Maybe their website inspires confidence in potential investors? I have no idea. Whilst its full of the usual technobabble the site itself it very impressive! I'd rate it as one of the best. Cheers.

Yes, very true! I hate to admit when it comes to investigating the fundamentals I am lacking, if you are investing on it would not hurt to look into it more and understand where your money is going. With a bigger account, one can trade and invest at the same time on the same :) I have heard good things about IOTUSD, good luck!

I just read the white paper and whilst a lot of it went over my head I was able to understand the gist of it. IOTA doesn't use a blockchain, it uses a tangle which is fundamentally different to the blockchain architecture. Its system is really focussed on micropayment's which is not really that useful right now. Seems you can't spend your IOTA's anywhere but I don't think its designed to be a currency anyway. I think its popularity is more about speculation than anything else. I think that flashy web site impresses people, I was impressed! Perhaps in the future this could be big providing the team follow through on their roadmap. Cheers!

Thanks for your comments @introspectiv, for some reason I had missed it! Given that it has been on fire as of recent, and reaching major resistance level 0.63 area, I might be looking to short it in the next day or so. Gotta be careful with these cryptos! Hope you made some $$$ and maybe keep some in case speculators keep pumping it even more :)

No worries, I think this project is ahead of its time, could be great in the long term! Yes made a bucket on NEO and then put some into GAS but it nose dived shortly after. Lots of activity at the moment, exciting! ..but what goes with poor XRP its the one that should be $20 by now... go figure, Cheers.

This post has received a 1.86 % upvote from @booster thanks to: @architrader.

hopefully next stop is 58c

Yep between 58c & 62c theres's a major resistance. If you got in early hold it as things are looking good for IOTA. Over 62c is $1 - 1.25. A great investment if it gets to break above the dollar mark!