granolalight (50)in #homesteading • 3 years ago (edited)

This post is entered in Comedy Open Mic - Round 12

So as we have been dealing with all of the flooding from the spring runoff, I have had to tackle the occasional nuisance beaver and respective dam. During these times, we have to get the trapper out to make sure that the problem doesn't recur.

This is only to be done if the road is in imminent danger. Yesterday it was flooded right across, so the boss told me to grab a beaver hook and head out and take care of the trouble. George, the trapper would meet me there.

If any of you have travelled through Beaverlodge, Alberta in the last fifteen years you will recognize the next photo. Here's a little history on it (This is the image I was thinking about on my way out there.)

When I got out there, I met with George, and while he was setting his traps, I started poking holes in the dam to try and get the water away from the road. I then went over to see if I could learn a little about trapping the little rascals, in case I need that in the future on the homestead.

Every bit of knowledge helps, right?

He was glad to have some help and I was glad to listen, so it was a win/win. Then I asked him if he had ever been attacked by a beaver. I had seen some awful wounds on dogs from beavers, so I wondered if they ever came after humans.

That was when he told the story about a local man that found a beaver that had been hit by a car and tried to get it off the road. It turned on him and bit his femoral artery and he had to kill it with a crescent wrench he had in his car. Then he told me about how angry the beavers get when they smell the castor of a beaver that isn't from that pond. Apparently, they go into a rage, which helps with trapping, as they aren't paying as much attention. He also said that they are attracted to the sound of rushing water, so they would come to fix the dam up. 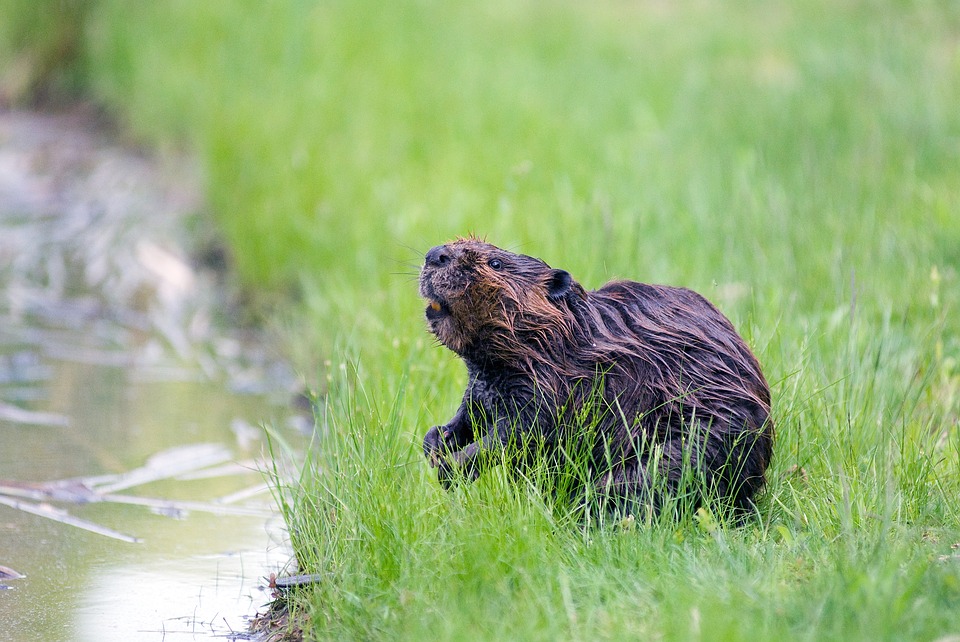 He had made some mounds around the pond and put castor on them, and then said he had forgotten something and was going to run home.

I went back to making the holes in the dam bigger.

Then my scenarios started.

For those that don't know me, I get these scenarios running through my head all the time. Some might call it imagination, but many have said that their imagination doesn't work that way. They are basically videos that instantly play different scenes out in my head. Usually, I'm the hero.

In these scenarios, the beaver came at me from different angles when he saw me tearing the dam apart. It always sunk its teeth in, before I was able to choke, stab, or beat it off of me and drag my badly bleeding legs to the road where a trucker can find me and get me to the hospital.

I was wading back to the truck through the pond when I heard a slap on the water directly behind me and some drops of water landed on my neck and shoulder. Now, anyone who knows about beavers knows that they slap their tails on the water when there is danger, so of course that was what I figured it was. I had a pair of hip waders on and a shovel in my hand, so I spun around to the left with the shovel already arcing through the air to brain my furry attacker.

He wasn't there. He was swimming underwater and going for my legs. I started using the shovel like a trident; spearing wildly into the pond in front of me and walking backward through the murky water toward the road and the trapper who was pulling up at that moment.

And down I went.

As my waders filled up with frigid water I heard George's door shut, so I started screaming at him to "shoot the son of a b****" and yelling that it had my foot and was trying to pull me under. I had somehow lost my shovel and was just punching blindly into the water as I tried to free my foot from the grip of the powerful animal.

George is about seventy years old and has been around, so he just grabbed my collar and said that I was stuck in the mud and there was "no f***ing beaver in that shallow of water".

I stopped punching and looked down at the foot and a half of thick, muddy water and realised that he was right. I moved my foot and found that it was just stuck in the silt. I looked up at George, who seemed concerned.

Sheepishly I said, "The beaver must have swum away, or maybe I killed it." 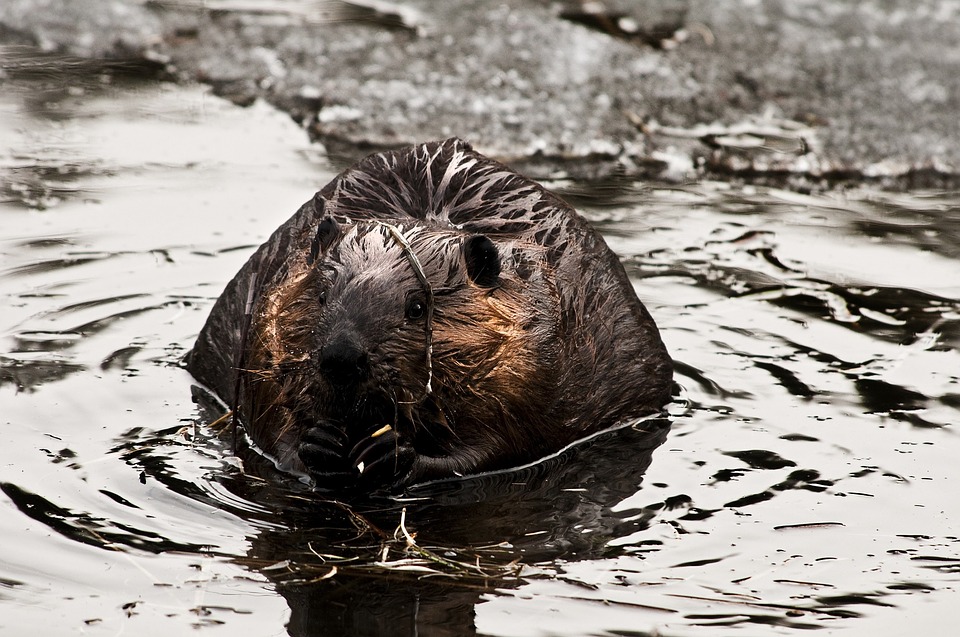 (I'll get you next time. Nobody messes with my habitat and gets away with it.)

I knew in my heart that the shovel didn't connect, and I damn sure didn't punch a beaver to death underwater.

I started to explain to George about the slapping and the fight, but he pointed out that the slapping was the poplar sapling that I had pulled out that got hung up in the tree and must have fallen as I was walking away. I looked where he was pointing and had to concur.

He told me that as he was getting closer he thought that a shark had my legs and was using me as a club to beat the pond. I sort of wish there was a camera, because I know it was probably the most activity my body has had in a long time, and it sounds like one of the funniest scenes to ever happen.

He finished with his traps and thanked me for the help, but didn't take me up on my offer to help him again, so I may not get any more hands-on education concerning trapping.

One of the requirements for the contest is that I nominate two people to add a bit of HAHA! to the contest, so I nominate @papa-pepper and @kiaraantonoviche to throw a little humour at these fine folks. Did I mention that there are great prizes? You can check it out here

Man, That is one hell of a beaver story. Mine are never quite so interesting.

See, not so interesting.

Come on, you must have seen one somewhere.

Oh, my goodness! I actually have tears in my eyes! That was a great story and I could picture it all!

Also, what's with Alberta and it's giant monuments? I feel like my Ukrainian folk really liked to celebrate their food and culture. The giant Easter egg, the giant perogie, the giant sausage... Source
I think there is even a giant ball of yarn somewhere. I think someday I might drive to all of these giant things just to subject my kids to taking photos with them. LOL! -Aimee

Well, we have a lot of photos of huge things from all over the country. I guess it gives small towns something to brag about. Now we are going to find this huge kielbasa and perogie. Then we will get some sour cream and have a feast.

This is a very funny read @granolalight. I can almost picture that moment! Meanwhile i recommend you cite your image sources next time. Here is a useful link on how to: https://steemit.com/steem-help/@mindover/don-t-plagiarize-images-here-are-13-free-and-legal-ways-to-find-high-quality-photos-you-can-use-on-steemit

This Post has been chosen and will be featured in today's Xposed Edition. Hopefully it will bring you some much needed exposure and rewards which your post deserves.
For more details on this project, read Xposed Introduction

Sorry, the Beaverlodge Beaver is my own and the rest are from pixabay.com . Thanks.

That is okay @granolalight. Sometimes we can forget to indicate those sources, but it is always good to.

Otherwise, the feature post is out, and your post here is now featured. You are one of today's select 7!

I hope that helps to bring some exposure to your quality work here, and also the much deserved rewards. My best wishes. Check it out here:-https://steemit.com/curation/@mirrors/xposed-plankton-daily-edition-1

Thank you very much. I'll go have a look.

The pleasure is mine (and oh, you have already come around!!). My best wishes.

beautiful friend You have my support. I hope to count on your support to keep growing. regards

Thanks for this fun read. I haven't been to the Beaverlodge, nor seen or heard about the huge beaver in your photo.

You're quite welcome, and thanks for taking the time to comment.

Where do you live? There must be some huge things around there. I find largest things in the world all over Canada.

I am in Montreal.

Ahhh, I don't remember any huge things when we went through there, but I remember amazing cheese. That is one of the best things about Quebec; they have so many small cheese producers.

The cheese, that's the French influence ;0) We do have a huge orange, an iconic sight of Montreal, where you can get some amazing orange juice and enjoy a car show ;0)