‘Island’ the Band – A Tale of Drunkenness and Live Music!

Warning, for authenticity there is a smidge of bad language further into this article

On Monday night I got a call from @goblinknackers asking me if I wanted to attend a music gig in Newcastle. Apparently, ‘Dave’, one of the guys at work had bought some tickets and was now unable to go. There were two tickets up for grabs.

‘Who is it’, was my retort? In response I got sent a link containing a video of a band called ‘Island’. As I’m literally stuck in the North-East every week I agreed. 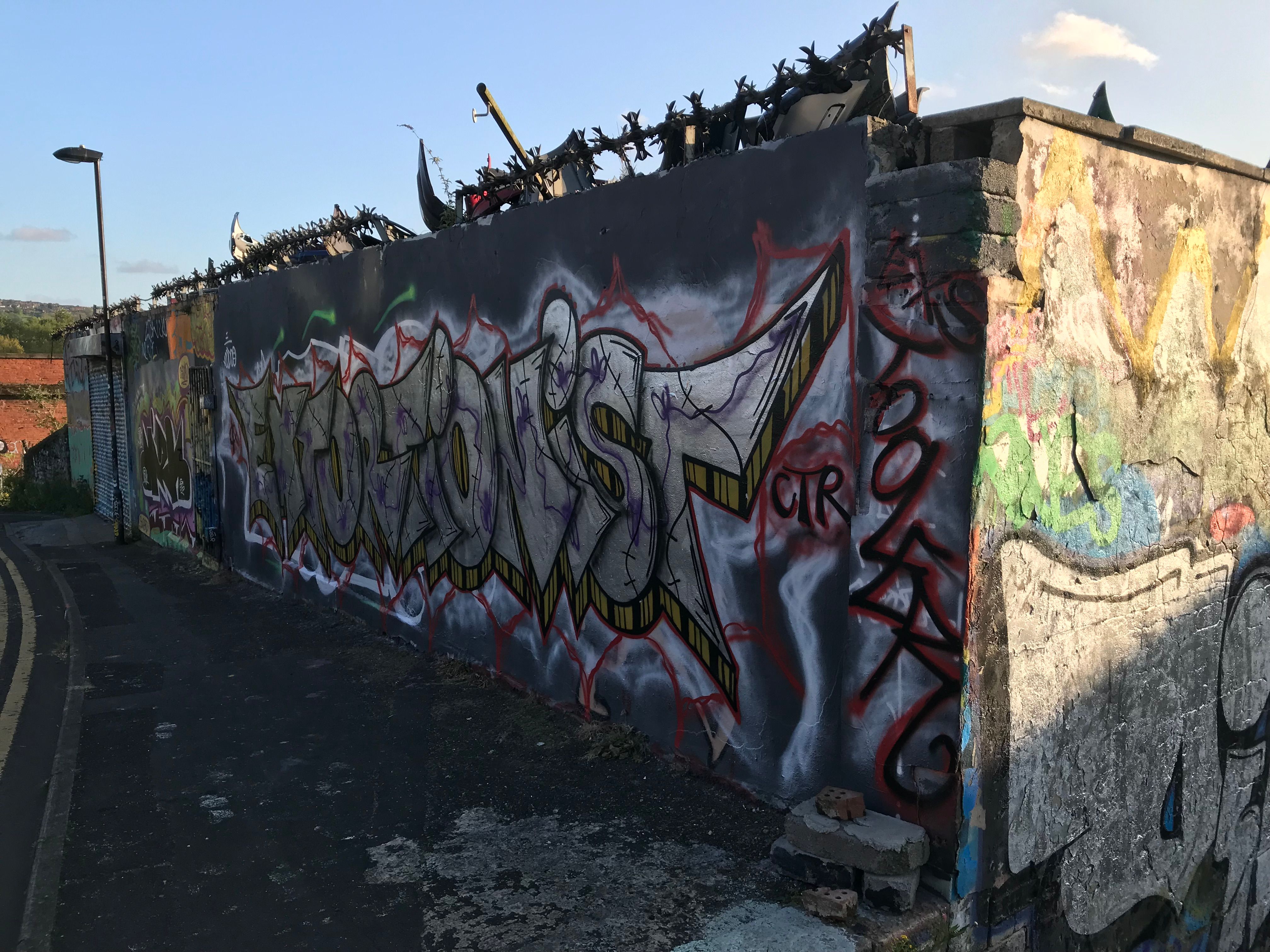 After a tedious drive through the Tyne Tunnel we landed in gangland, or what appeared to be. Graffiti ridden buildings with…, was that barbed wire jutting from the top? Abandoned plots of land and a general run down area next to the Tyne.

It wasn’t as bad as my initial kneejerk reaction; my car perhaps would still be here on return?

I took a few snaps of the local landscape and it did look quite interesting. Graffiti, after all is a form of art and it can be quite cool looking. After a burger at ‘The Tyne Bar’, which ‘Dave’ insisted was a ‘top place’, we weaved along the edge of the ‘Tyne’ toward The Cluny. Was this really the river Tyne? This is the river that required a tunnel for us to cross, so what was this mud filled mess that I’m now looking at? 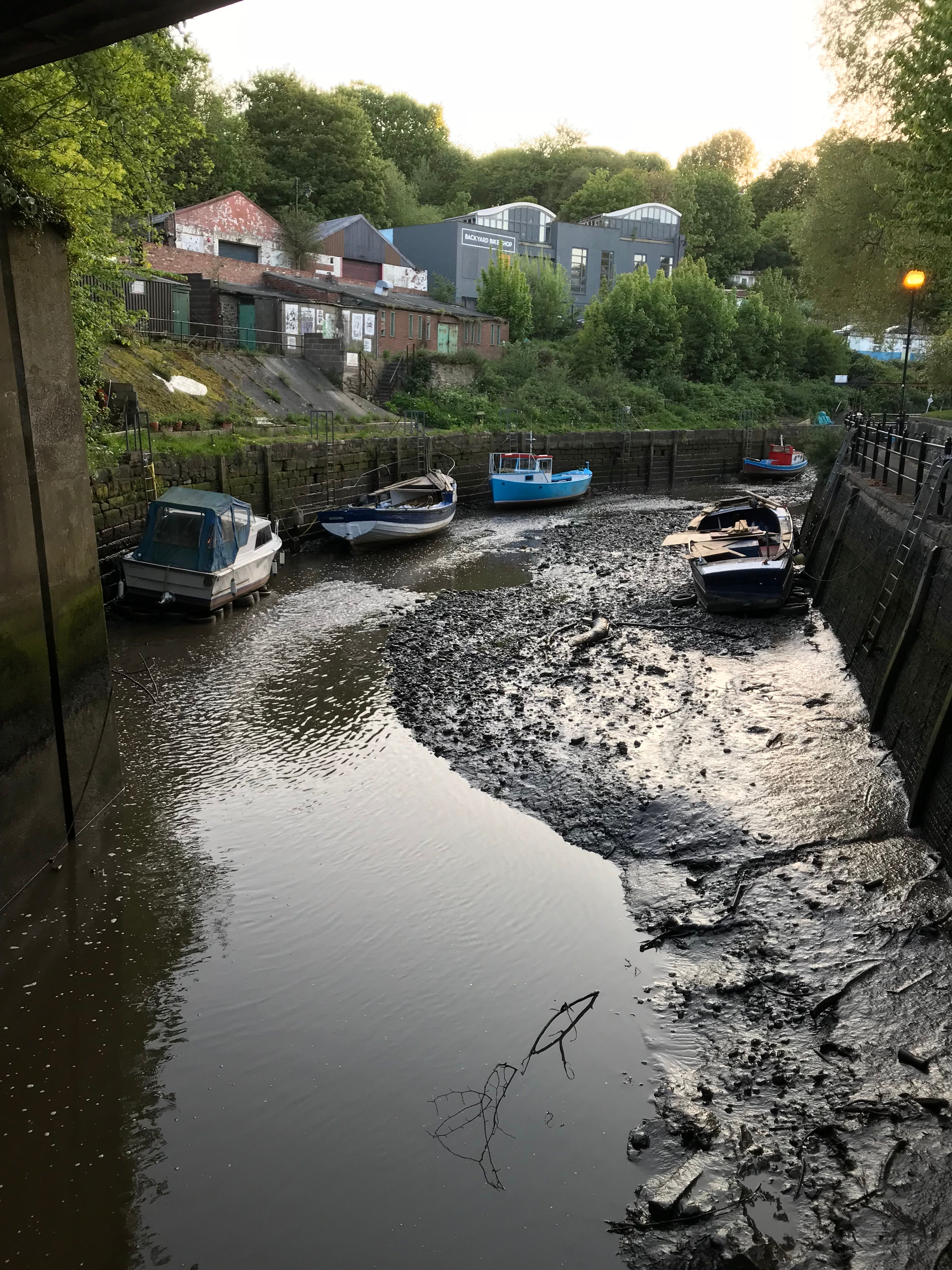 Ten minutes later and we were at The Cluny, our destination and of course it was beer all round, except me the driver. @goblinknackers purchased a pint of ‘Blue Moon – Belgian White’ which was in fact Weiss beer. I did have a taste and it was OK. @goblinknackers wasn’t so sure but downed it anyway, just before entering the main gig area. @daan may have experienced this one before? The Cluny can host around 160 people standing, but I would estimate there were around 60 people inside. Very cosy and a few seats for the not so young like yours truly.

Dave claims to be a fan of the band he came to see, ‘Island’. By this time both Dave and @goblinknackers were quite pissed and getting a little animated. I noticed after each song, Dave was not applauding? He was complaining that these guys were, ‘a load of fucking crap’, and were playing ‘B sides’. ‘I have not heard any of these songs before’, rang out the further complaints!

I thought they were decent so duly applauded myself. Six tracks and they we off, gone! Is that it? 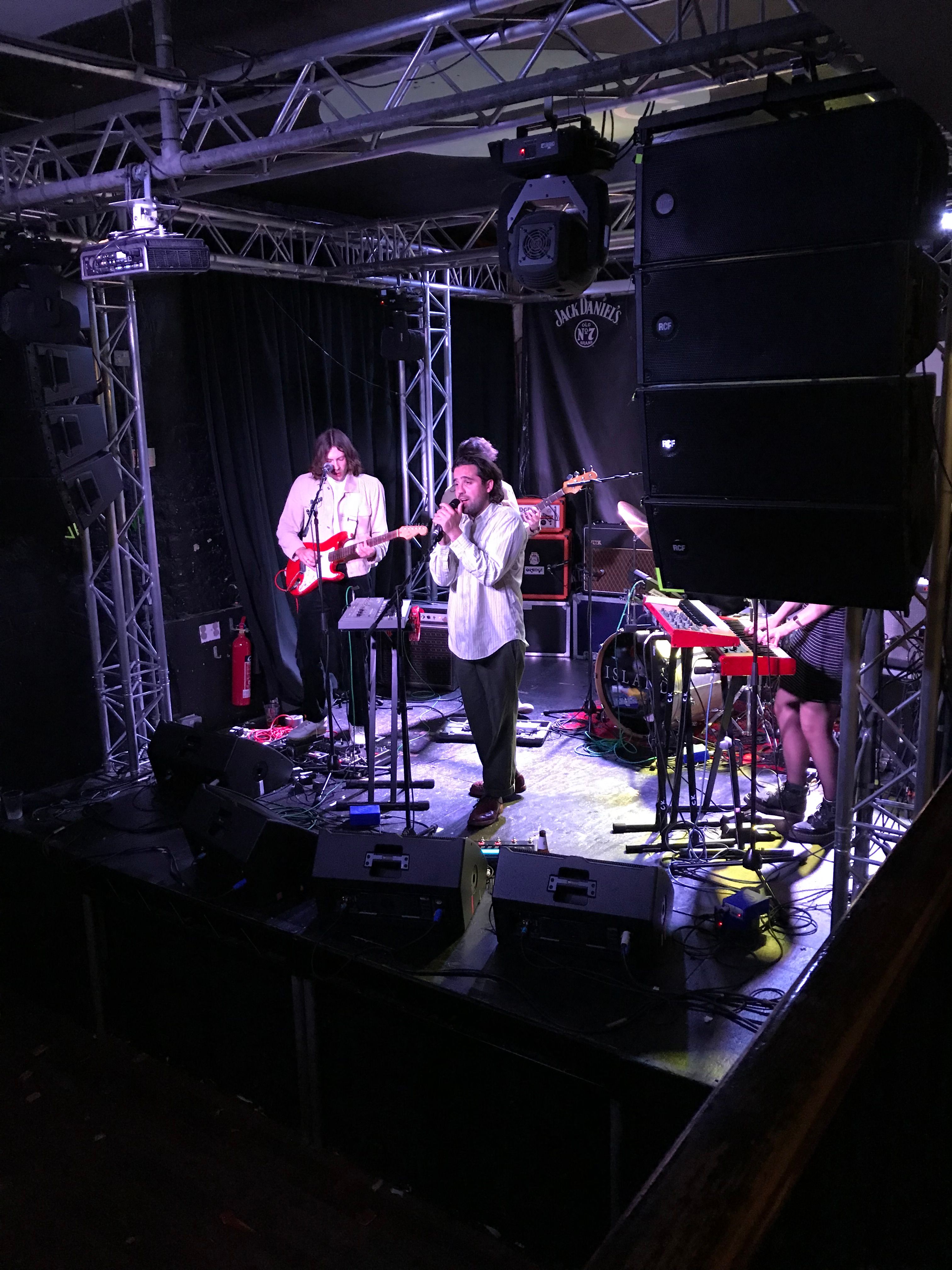 It was dawning on all of us that this was the support group, not the main act. Dave had really not done his homework very well, knew the songs but had never had a visual on the band members.

I really couldn’t stop laughing at this point, the mumbles and grumbles, the repeated complaints of ‘what a load of crap’, and sour looks just set me off. However, it was over, ‘Club Kuru’ had left the stage and the main event was going to start.

‘Island’ entered the stage after setting up their kit. These smaller bands don’t have roadies to do the donkey work! An hour later and after perhaps a dozen songs, Dave was dancing around in a gig full of students between several boughts of sneezes. What was ‘Island’ like as a band? I heard a little U2 in the guitar work, but they are more light and upbeat. Have a listen to the song, ‘Ride’ and you can decide. They have been touring Europe and are about to embark on the US tour. The band’s web site is a little sparse but is here

By the time the band were offstage and behind the curtain reserved for the artists, both @goblinknackers and Dave were at the stage of not remembering what happened the night before.

They subsequently gate-crashed this area, and were told quite politely to ‘bugger off’ in no uncertain terms. The band was due to visit the bar, so there was time for photographs and selfies later.

At this point Dave exited the bar area for some unknown reason while we waited for the band to appear again. The singer was very cool, and let us take some photographs. He explained they were trying to work up to playing larger venues. 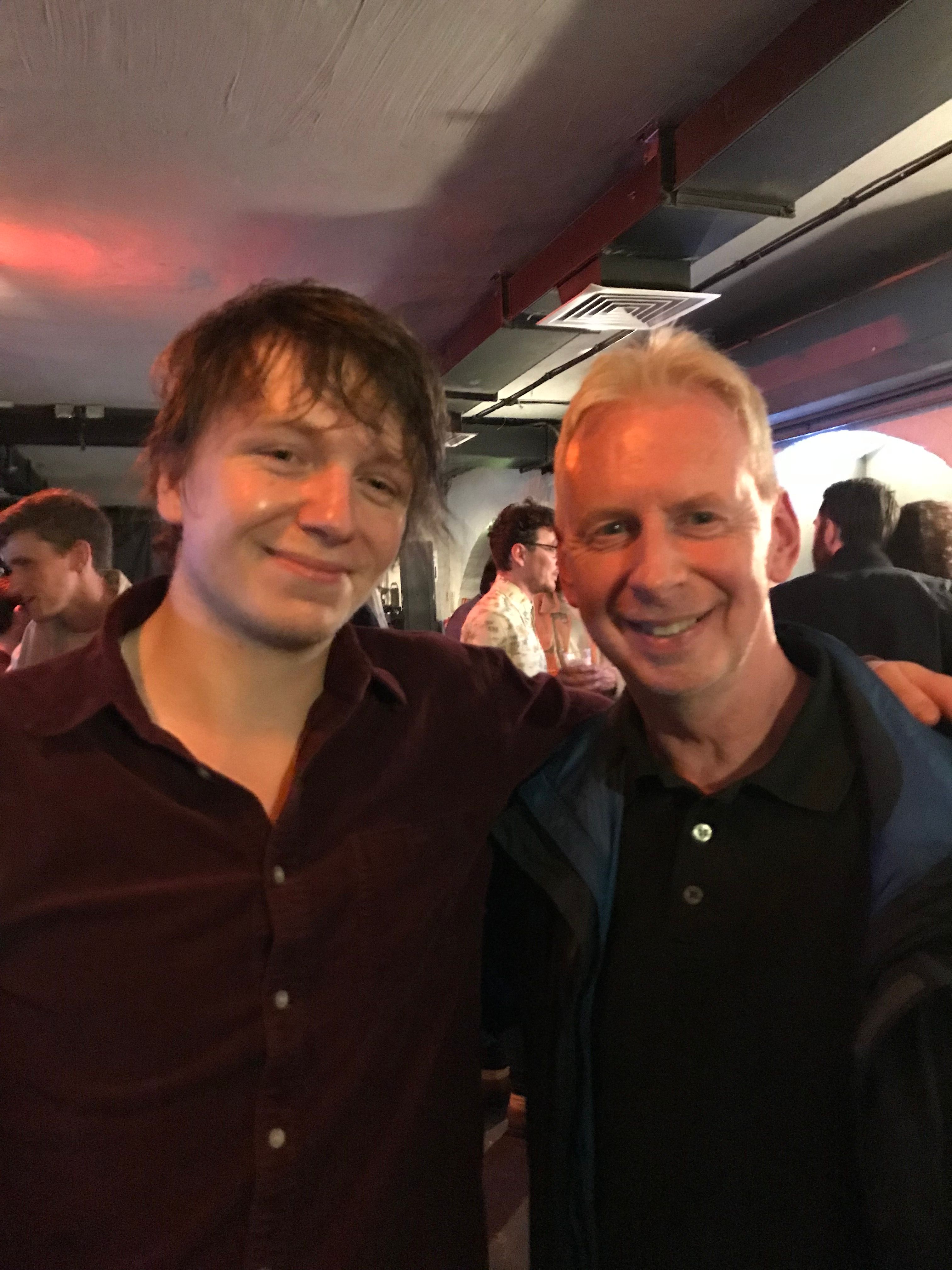 We left trying to find Dave who was extremely pissed off at us when he discovered we had some ‘photographs’ taken with his idols. No amount of persuasion would entice him back into the bar even though we had just left. I thought his behaviour strange, but then again after 10 pints people start to change a little sometimes.

After much moaning and groaning from Dave about ‘missing his chance’, ‘I need some smokes’, ‘I need some tabs’, we left the venue and headed for my car which fortunately was still there.

It was a 30 minute drive back to Seaburn and I was hoping Dave would not throw up in my car. It didn’t happen and I managed to jettison both of them safely and drive back to my B&B.

Overall it was a good night and good music from both bands in my opinion. If ‘Island’ ever becomes famous then I will have my small claim to fame. All photographs were taken by myself.

It was dawning on all of us that this was the support group, not the main act.

That is so funny! I've had something similar, and wasn't even drinking at the time. Yeeeeeaaaaars ago at I Love Techno in Belgium, there were really only DJ's that were my reason for going.

We headed for the different stages, trying to get to the main stage as closely as we could, because I had the program for the line-up in my hands and 'knew what I was doing'...
Little did I know that they had changed the times a little, and had announced this. (Who listens to announcements anyway?)

Sure enough, this DJ was playing. His music was great but we were waiting for the one and first one on my list: Carl Cox. Call it whatever you want but in my world, somehow I was expecting a white guy. The internet wasn't quite what it is now just yet so there was no way to do any research other than from some event posters.

I became a little impatient because the program mentioned that he should have been on by now. I walked up to the DJ booth to ask some of the staff that was running around. I stopped one of the hard working men and asked:
"When is Carl Cox coming on?" He looked at me in disbelief, a little annoyed, and without a word he pointed at the DJ. We had been listening to Carl Cox all along!

But it gets worse! The headlining DJ was Laurent Garnier who is, to this day, my all time favourite DJ. Whenever he played in Holland, his performance was 'meh' at best due to restrictions the event planners would put on his playlist. However, when he played in other countries, he was an absolute DJ-GOD.
So that night, there was a female DJ playing by the name Marusha. She was pouring her heart and soul into her playlist, so we just couldn't get enough of her. Now, according to my program, she'd be finishing up by the time Laurent Garnier came on which gave us the chance to see most of both.
However, she played on a little longer. Of course we didn't catch this because...well...circumstances. So by the time she was done and we managed to make our way to the other hall to catch Laurent Garnier, he had been playing for over an hour and we just barely managed to catch the last two tunes he played.

The whole night was still worth it, of course, but we missed the one DJ I had been raving about for so long. Luckily it wasn't the last time I saw him play.