Spain's plan to use its mighty Armada to invade England was devastatingly smashed by the tactics of Elizabeth's fleet. 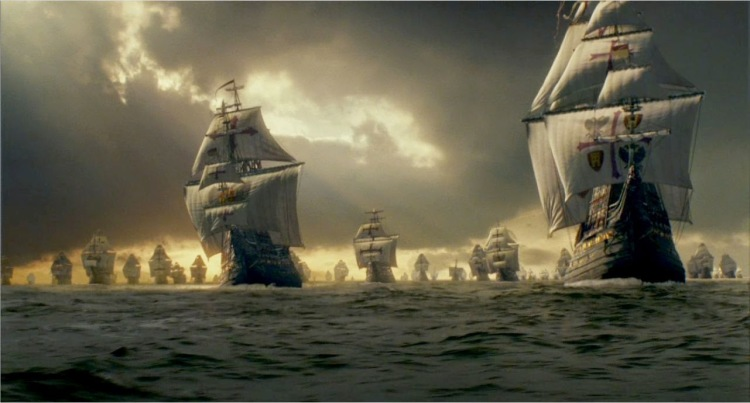 On the morning of 29th July 1588, a huge fleet of warships was sighted off the Lizard in Cornwall. Formed in a majestic crescent, it turned into the Channel and bore down on Plymouth. On hill-tops right across southern England huge bonfires were set alight, one after another. These beacons signalled the long-awaited arrival of the mighty Spanish Armada. The battle for England was about to begin.

That afternoon, a look-out rushed to report the news to Sir Francis Drake, Vice-Admiral of the English fleet, who was playing bowls on Plymouth Hoe. In this hour of supreme nation crises, so the legend goes, Drake remained cool and calm. 'We have time enough to finish the game', he state, 'and beat the Spaniards, too!' With that he went back to his game.

Drake had no reason to feel so confident. The Armada was awesome. There were 130 ships in all, including 64 huge galleons. They were manned by some 8,000 sailors, while about 19,000 soldiers waited to do battle after grappling and boarding the enemy ships. Drake's superior, Lord Howard of Effingham, remarked that 'All the world never saw such a force.' Another observer thought the sea 'groaned beneath the weight'.

The purpose of this mighty force was no less than to conquer England and topple Elizabeth from her throne. For years the Protestant queen had been a thorn in the flesh of Philip II of Spain. His Catholic domains in the Low Countries (the Netherlands and Belgium) were under threat from Protestant rebels, and Elizabeth was openly giving them aid. And she was allowing Drake to plunder Spanish treasure ships in the New World.

The Spanish nicknamed Drake El Draque (The Dragon), and they feared him as they would a mythical beast. But now it was time to bring this heretic queen and all her unruly subjects to heel, and the 'invincible' Armada was Philip's chosen weapon.

'The Enterprise of England', as Philip called it, involved a bold strategy. The plan was for the Armada to sail up the Channel in such strength that the English navy would not dare provoke a full-scale battle. Then, at Calais, it would meet up with a large Spanish army commanded by the Duke of Parma in the Netherlands.
With the English standing helplessly by, the Armada would then ferry this army across the Channel and that would pretty quickly be the end of the matter - the end of England in fact.

To begin with, things went more or less according to plan. The English had about 50 ships - half their fleet - at Plymouth, but there was nothing they could do to halt the Armada's advance. Howard and Drake got their ships nicely into position behind the enemy, which meant they could pound away at the flanks of the ships with hit-and-run tactics, but no more than that.

For nine days the Armada moved majestically towards its destination, with the English snapping at its heels like a pack of terriers. Resteemed to over 6700 followers and 100% upvoted. Thank you for using my service!

This post has received a 18.07% upvote from @lovejuice thanks to @tomswan. They love you, so does Aggroed. Please be sure to vote for Witnesses at https://steemit.com/~witnesses.

Facinating story! You have been upvoted and resteemed.