History and A Modern Adaptation To The Spirit of Guy Fawkes

Most people do not know the history behind 5th November as it is beautifully wrapped into a joyful celebration while containing a very gruesome story.If you light up bonfire and fire a cracker during 5th November, that means you're celebrating the failure of treason plot to fight against religious bigotry. On a personal note, Always know what you're celebrating, don't just follow the mass without understanding the essence of any single celebration. This post is meant to be a discussion of history revolving the gunpowder plot, Guy Fawkes and modern adaptions of Guy Fawkes spirit.Do not hesitate to add your voice regarding this issue. 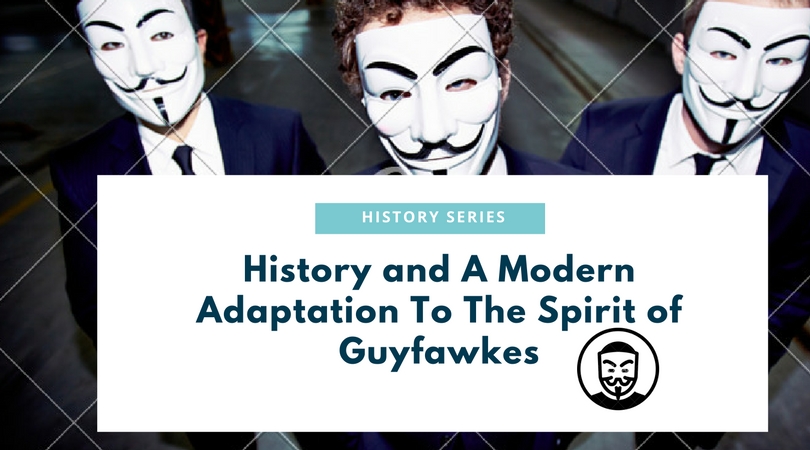 Guy Fawkes was a devout Catholic man who lived in the UK during the reign of Elizabeth Tudor and King James I. In that time, Catholics were persecuted and all priests were ejected from the country under the Protestant law. Any civilians who do not accept and abide the law in the reign of Elizabeth Tudor would be punished to death. Right after her reign over, King James I took over the throne,yet he was still less tolerant towards the Catholic. Thus, Robert Catesby, a prominent resucant catholic, had a plan to overthrow the reign by blowing up the British parliament building. He gathered several people including Guyfawkes who was introduced by exiled welsh spy Hugh Owen.During that time,Guy Fawkes was fighting for Spain during the Dutch war of Independence. Soon as he joined the other fellow conspirators, he was appointed to be a chief conspirator.

The plot to annihilate the entire protestant government was planned to execute on 5th November 1605 as King James I was to have attended the parliament. Therefore, the conspirators including guyfawkes positioned about two tons of gunpowder inside the cellar of the British parliament building. Guyfawkes had a role to protect the explosives and to light them up. Unfortunately, one of the conspirators warned Lord Monteagle through an anonymous letter which stated;

."retyre youre self into yowre contee whence yow maye expect the event in safti for ... they shall receyve a terrible blowe this parleament"
Modern translation: Do not come to work for your own safety because the parliament building will be blown up

The letter sent by an anonymous traitor causing the plot to fail hence after the capture of guyfawkes in the cellar, the English authority killed and tortured all of the conspirators including innocent Catholic.

Even Guy Fawkes was not the leader of the plot, he was known for his courage and determination to be in the front line and sacrificed his life for something he believed. Today, his spirit is an inspiration to movements which opposes the government whilst also the representation of the oppressed voice.

Guy Fawkes lived during the shifting reign between Elizabeth Tudor to King James I thus I still classify him to be the Elizabethan as presumed he was born in 1570 although he was listed to the role during 1604 under the reign of King James I.

The Elizabethan Guy Fawkes was fighting against religious bigotry in which surprisingly, these days, the topic came to the surface again. The history repeats itself but in a different cultural background and circumstances. For instance, numerous conflicts were caused by religious bigotry yet this time involving the interfaith community. We saw the holocaust and today; there is the jihad movement and slaughtering human in the name of religion. And have we not learned from the history to be more tolerant towards another human being?

Additionally, he lived during the time where the freedom of speech was restricted. An act against the authority was condemned hence the form of protest was done through underground movement. It is also ironic given the Elizabethan era was also called as the golden age of the British development. There are also prolific writers during this period, and poetry was flourishing, yet the authority was oppressive towards a certain religion.

On the other hand, the modern representation is embodied into a face mask of Guy Fawkes which is worn by people during a protest against the government. The movement now is not only a protest against religious bigotry but also towards the authority and even the corporate.

Below is an example representation of the Modern Guy Fawkes The Old Tradition VS The Modern Tradition of 5th November

Every 5th November in order to commemorate the fail plot of King's assassination, the citizen across Britain light bonfires and burn a statue of guy fawkes. The children would bring the effigy of guyfawkes and carried a sign "penny for the guy". As Britain colonialisation began, the tradition has spread to other countries. Today, 5th November is now celebrated by masked protesters not to commemorate the fail plan of the assassination rather a protest to the government. For instance, according to an article published in telegraph, a protester gather in London streets and said to be collectively organized by a hacktivist group called "anonymous".

Likewise, a riot in Romania as written by @guyfawkes4-20( not to be mistaken with the Guido Fawkes) reported that during 5 November 2017 protesters gather into the street to protest against a newly passed law in Romania.

I went on the “holy” Facebook to search an event for 5th of November, and I found a riot against the Romanian Government and some stupid laws that they just created and I decided to go there and make a post about it.

To the whole, Guido Fawkes ( Guy Fawkes) spirit remains alive in the heart of people who sees inequality and injustice from the lawmaker.His spirit also carries a change to the better of the world. On a personal note, a demonstration is justified when the authority does not respond to the public demand. I have seen myself that a very big organized demonstration has managed to force the authority to take an action. We are living in a country that claims to be democratic but still do not uphold every democratic value( this will be another day to talk about).

A very important note: This article is properly cited and for that reason if you find anything that is not properly cited do not hesitate to contact me to add the book and/or link to the bibliography section. I do not accept general Wikipedia to add to the bibliography section.Also,feel free to add your information, opinion as this post is meant to for educative and disscussion purpose.

Let me know if you like my history series or you can request other series that deals with liberal arts. Thank you for reading this lenghty post.

Really good post @macchiata. That was quite interesting to learn more of those events.

@stoodkev I know right, not many knows probably about this but here I come to save the day :) There are alot traditions that we're not aware of its history and we simply celebrate it just because it's cool.

Though I have heard about Guyfawkes online I never had the change to read the story and the history behind. Also, I had no idea that Britain has traditions around it!

Thank you, that was interesting :)
I will leave the questions to the UK folks hehe

@paps, so far none has answered my questions. Well I hope someone will do :)!

I share a lot of Anonymous news on my facebook ; i am resteeming this post just for the love of Guy Fawks and Anonymous and V for Vendetta and everything in between .

@endymionoriax, thank you ! wait for my next part about the movie vs the book adaption of Guy Fawkes. I still have your questions but I am really stalling it. If you use discord find me at @macchiata#0736 :). I find it easier to talk and discuss about things there. Also It's easier to drop links for the discussion .

unfortunately i do not have discord ; however i am thinking of getting it because everyone else has it, plus a bunch of people in some games i play, on my phone also want me to get it lol !

Please do! It makes life a whole lot of easier plus it only use email :D instead a phone number that's why I love it!

@sammymubarraq, thank you and if you have any opinion, thoughts, do share it. I would like to read it :)

My pleasure @macchiata.. I think you must visit my blog.. I will be happy :-)

@barca, thank you for reading. If you have any thoughts or information to add feel free!

This blog is mentioned in

The example is our @guyfawkes4-20 - you know that right??? :D Awesome! I didn't know much about Fawkes until I met our ocd fellow, but now I learned even more from you - excellent post! :)