In all fairness, the idea of this came from @just2random whom did some excellent coverage on the previous BTC calls of @haejin

That said, he did an excellent job scoring the results of his predictions in unbiased fashion. However, in reading through the article, the greatest complaint in the comments section was that he only evaluated BTC and did not evaluate the ALT coin calls of @haejin. I will also say that in the comments I stated that I did not want to steal the "mojo" from @just2random in his coverage of BTC and the predictions of @haejin; accordingly I will stick to the ALTS as it seems to be a requested review and no one else appears interested in undertaking this massive task.

In reading through the numerous articles on the site and the plethora of comments made by @haejin in defense of his ridiculously high post payouts, his greatest defense and the one shared by his groupies is that during 2017 his market savvy helped make them make massive profits.

I will concede that during what was likely one of the largest Bull Markets in history, a time when you could put on a blindfold and throw darts at a printout of every available ALT coin and make money on whatever you hit, he was on point with his calls.

In fact he was relatively accurate right up until the beginning of the correction in mid December at which point his accuracy began to diminish precipitously. In spite of the obvious shift from Bull to Bear demonstrated by BTC, he continued making extraordinarily bullish calls on a variety of ALT coins, regardless of the fact that BTC was well on the way to dragging the market down. I am certain that a great many of his followers whom had failed to invest in themselves through knowledge were led like lambs to the slaughter by what I consider to be extremely irresponsible recommendations based upon the size of his follower base. I say irresponsible as he should be well aware that his calls are blindly followed by a great many people, accordingly his advice can lead some to financial hardship.

I think on many days he may have been more concerned with scraping the barrel for content so as he could continue putting up 10 articles a day and collecting the extraordinarily high rewards than actually contemplating the accuracy and potentially damaging effects a lack thereof could have on his followers.

Again I will state unequivocally that during the majority of 2017 (largest bull market in history) his calls made people money.

I will also state that my Magic 8 ball returned massive profits during this time frame as well when I was trying to decide what Alt to buy on Bittrex.

In fact on the coin featured below, he was accurate and hit many of his targeted projections through November. It is clear that he can use the Fibonacci tool and that during a bull market he can point out obvious symmetrical triangles, descending wedges, fractals, and bull flags/pennants (so many of those during 2017).

What I take issue with is his calls made post the start of the correction that to me made no sense in light of what was occurring with BTC.

His Call With Chart Jan 13th 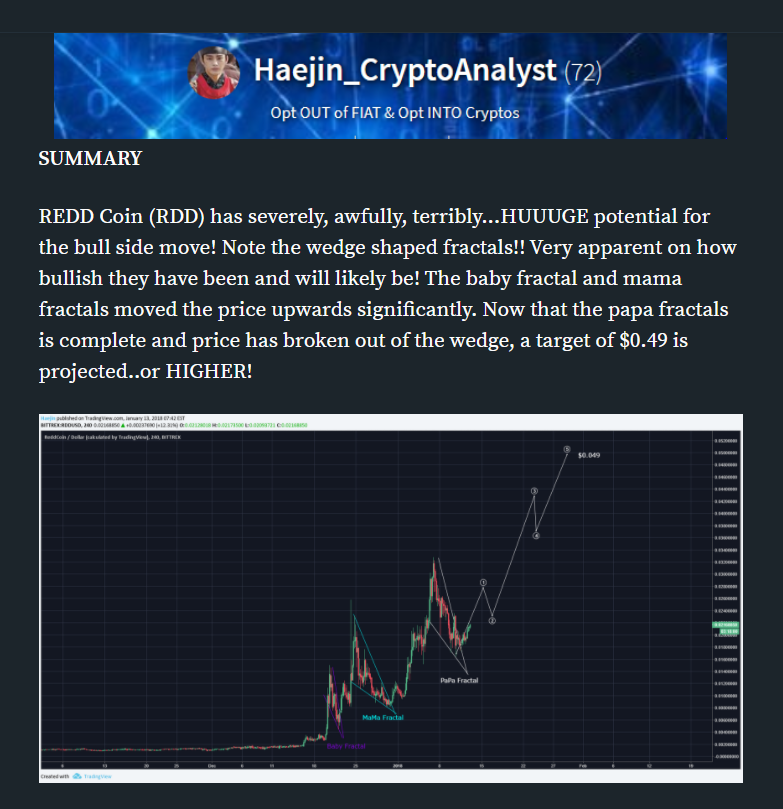 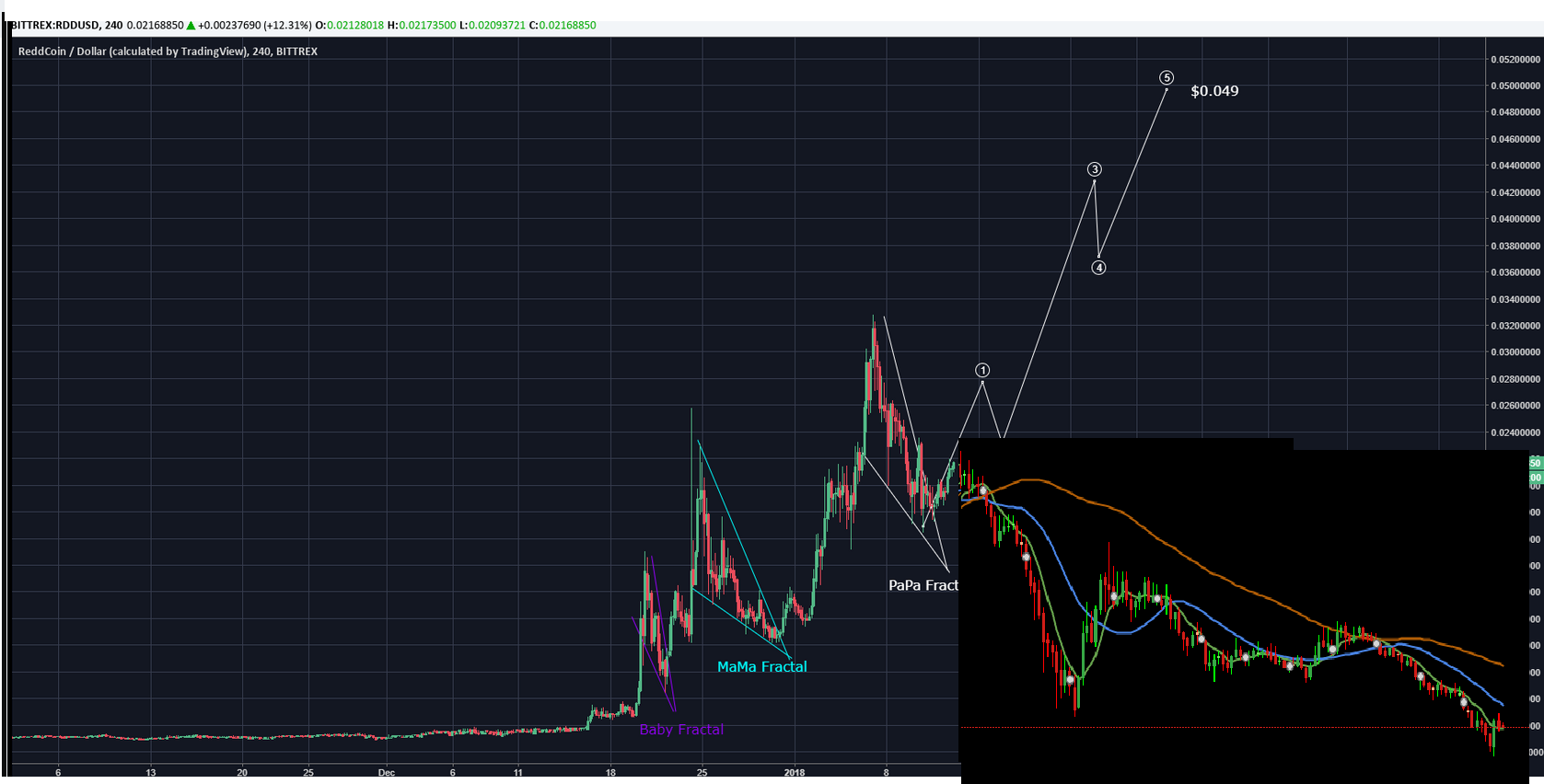 Not much else to add, the image kinda speaks for itself, roughly 500% difference between the call and reality on this one.

I will try to get one of these up every couple days. I grabbed this one as it is one he has hyped a lot with no less than 15 posts. Again during the bull market of 2017 he met most of his targets for this coin. If I pick one and he is right I will document it accordingly. Off the top of my head, I know he has done a lot on XVG, MANA, and a few others. I will try and go through the coins by the number of posts he had made about them.

"Again I will state unequivocally that during the majority of 2017 (largest bull market in history) his calls made people money."

Anybody who made any investment made money. If I told people to invest in more Dogecoin every day it would have been a good call. That is a version of the Perfect Prediction Scam.

I agree, and it is obviously a scam.. no doubt about it..

perfect prediction scam
This scam involves making a series of opposite predictions (on winners in the stock market, football games, or the like) and sending them to different groups of people until one group has seen your perfect track record sufficiently to be duped into paying you for the next "prediction."

For example, Notre Dame is playing Michigan next week, so you send 100 letters to people, predicting the outcome of the game. It doesn't really matter whether the recipients of your letter are known to bet on college football games. The information you provide will stimulate some of them to want to bet on the game. You name your letter something swell like The Perfect Gamble. In 50 letters you predict Notre Dame will win. In the other 50 you predict Michigan will win. You write a short introduction explaining that you have a secret surefire method of predicting winners and to prove it you are giving out free predictions this week. Notre Dame wins.

The next week you send a free copy of The Perfect Gamble to the 50 who got the letter that predicted a Notre Dame victory. In the introduction you remind them of last week's prediction and you inform them how much they would have won had they followed your advice. To show there are no hard feelings and to give them one more chance to take advantage of your surefire system you provide—free of cost—one more prediction. This week Notre Dame is playing Oregon State. You divide your list of recipients and you send 25 letters predicting Notre Dame will win and 25 predicting Oregon State will win.

Since you are a crook for running this scam, you won't feel guilty in promising the prospective suckers their money back if not completely satisfied with your predictions. Your hope is that they will be greedy and say: "How can I lose?" You needn't remind them how. You might even be able to rationalize your behavior by telling yourself that they deserve to be scammed because they're so greedy!

For different audiences, you can pretend to be a psychic or an astrologer or a mathematician or a gambler who knows how to fix college football games. If you are cheating the gullible as well as the greedy, you may be able to convince yourself that you are performing a beneficial service to the community by cheating these people out of their money. You might persuade yourself that rather than try to put you in jail for being a fraudulent scammer, society should give you an award for reminding people to use their common sense and critical thinking skills.

A variant of the perfect prediction scam is used by some psychics. If you tell enough clients "someday you will be rich beyond your wildest dreams," then if one of them inherits a great sum or wins a lottery, you may get credit for being psychic.

"A variant of the perfect prediction scam is used by some psychics. If you tell enough clients "someday you will be rich beyond your wildest dreams," then if one of them inherits a great sum or wins a lottery, you may get credit for being psychic."

That one, but slightly different. The psychic example uses the law of large numbers, leveraging statistics. Considering the cyclical nature of the market, statistically you will be right if you predict what happened yesterday will continue today. When it goes up consistently you can keep telling people buy. If it starts going down for a few days you can keep saying sell. Then when it starts going up a few days you can start saying to buy again. And you will be right most of the time. You can use the technical analysis to write off the times you were wrong as "indicators that the market was about to change".

Smart, professional investors who do dedicate their lives to research and technical analysis lost to a nearly static list of companies 9 out of 10 times. What's worse? Nearly 2 in 3 large cap funds FAILED in the last 15 years.

"...only 34.11% of large-cap mutual funds that existed 15 years ago are around today. Needless to say, the 65.89% of funds that didn’t survive were mediocre performers when they were merged or liquidated out of existence. "

Yep, nowadays you can't be to carefull by following any predictions in this freak market still dominated by BTC.

I agree, easy way to get screwed if you just blindly listen to someone else..