I won a contest yesterday which had 75 Steem prize for the first place. I am so thankful to @timcliff for arranging the Steem Shilling Contest and choosing me as the winner. As a token of gratitude, I wish to spread the happiness and involve my followers via this giveaway. 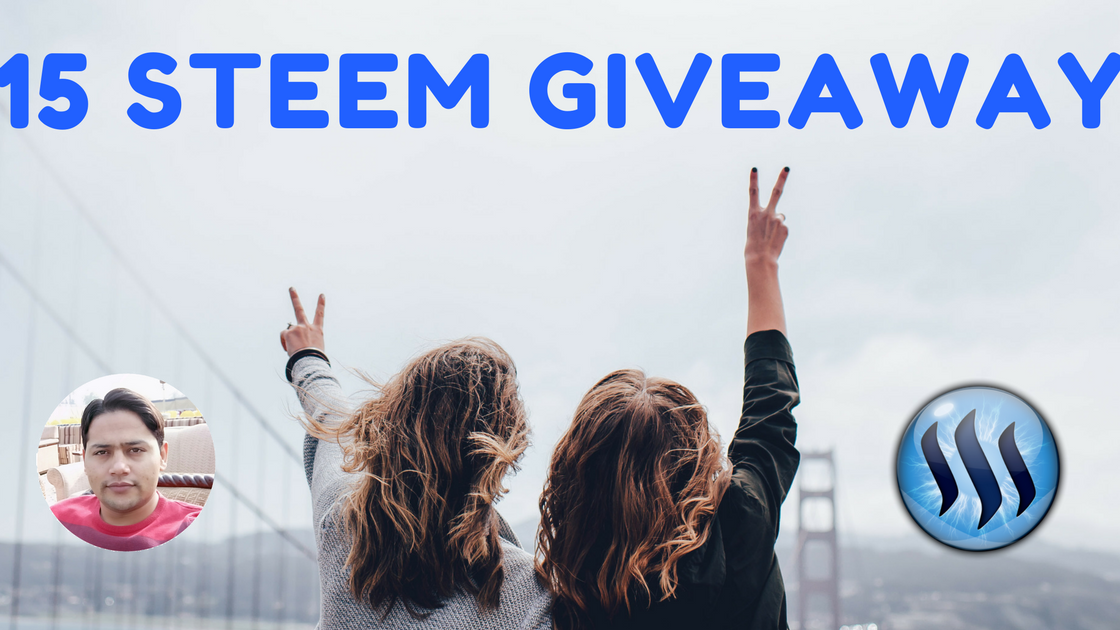 I also hope that this contest will serve as something positive in a market which has seen Steem and SBD fall in value for a few months now. Honestly speaking, I am confused and hopeful at the same time about the crypto market situation. I understand that many people are really upset. I wanted to do this giveaway to bring some hope and smiles back.

15 STEEM will be distributed between two winners as follows. 10 SBD prize added to facilitate multiple winners.

How these two winners will be decided is clearly mentioned below.

I am doing this for my followers only so if you are not a follower, you can follow me to be eligible. Here are the rules to participate.

These rules are fair and simple I think. Anyone from my followers can participate and win.

PS: If more than one participants have the winning number, the original price will go to the first person as mentioned in rules. However, I will reward the second participant with 10 SBD outside the 15 STEEM prize money, as amended in prize description.

I will simply use Random.org to generate two random numbers as per the ranges defined in the contest. The participant who wrote the closest number to the random number thus generated will be the winner. For example, if the resulting number from Random.org is 53 and Bob wrote 55 (for 10 STEEM prize), with all other numbers bigger than 55 or smaller than 51, Bob will be the winner because 55 is the closest number to 53. I hope you get it.

Winner will be announced on Thursday. Good luck to you. Steem on!

Hello @ilyastarar.
My numbers are:
6 and 113.
Thanks for making this little contest btw. :D

congrats for winning of 75 steem.

Hi, @ilyastarar. I ran into one of your posts while trying to understand Steemit rewards better (thank you for the great explanation!). I had taken a peek at your blog and found some helpful posts, though hadn't pressed the follow button at the time. But a few minutes ago I stumbled on this giveaway through observing my account's upvotes from a curation trail I'm in. Followed now!

Congratulations on winning the contest! It's so generous of you to share the prize, and through a simple contest that anyone can participate. I've just won the second place in a comment contest yesterday and can feel the happiness! Though my only way to spread the happiness is through upvotes, as the prize was a 200 SP delegation for one week.

Followed, upvoted and resteemed this post. My numbers: 79 and 180.

Lol I'm tempted to post my links. Congrats as well!

Thank you! I got tempted to link to my post where I talked about my surprise when I won second place, but decided against it :P .

Congrats. I reached your post anyway and gave a little upvote. ;)

Resteemed. Wouldn't resteem any contest, but everything you post is just straight quality so why not :)

Wow congratulations on your win and thank you for doing your own contest. I resteemed and I select the numbers 54 and 123.

How nice you choose to share your winnings with the Steemit community!

This is lottery/gambling. it’s tempting to participate in things like this, but I think it’s better to ask your followers to do something productive.
Besides this small criticism, I would like to say that you you are doing great work by writing useful posts about steemit and helping other steemians succeed on steemit.
Many Congratulations on winning the contest.
Wishing you all the very best.

Btw if you want to participate as participant number 50+, you got a hell of a job to find numbers that are not yet chosen 😁

And one hell of a job to find the winning number. 😀

I am worried about participation though. If it exceeds hundred participants, there is going to be some trouble.

I decided to reward in case of duplicate number winning as well. The payout of this post will be enough to give some reward even if the winning number is mentioned by two or more participants.

However, original prizes of 10 & 5 STEEM will not be split and will be given to the deserving winners in full!

I followed and resteemed. Numbers are 10 and 199. Thanks!

Congratulations on winning the contest. It is so nice of you to share your happiness with us. Thanks for arranging this contest. My numbers are
47
153

For the victory you achieve I really appreciate it. I am redeemed
With numbers 88 and 156

Resteemed and feeling lucky on 24 and 151

You are in. Good luck!

Resteemed. Joining my first contest with numbers 72 and 132.
And thanks for spreading the smiles :)

Should have confirmed your resteem (I know you did that). It is a requirment.

I Resteemed and want to say congrats on your win. I pick 17 and 138 and also would like if you please feel free to join my current Steemit #contest here https://steemit.com/contest/@isteemithard/design-isteemithard-a-profile-picture-avatar-contest-8-winner-of-7

Hello @ilyastarar.
My numbers are:
87and 187
Thanks for making this little contest btw.

I'm new on and I feel I'm not doing something right because I've not earned anything reasonable.
I'm hoping this will be my first win.
91 - 191

My numbers are 29-129
29 was the birthdate of my son. Its really nice of you to share your blessing to others.

Reesteemed and followed. This is first contest in steemit. I hope it turns out a blessing.

Not really a big fan of resteem contests, but I like guessing games, so might as well try this :)

can we use multiple id's? :p

That would be unfair I guess. One person should have one chance only. It's up to you to do so but I don't recommend it.

that's why i asked first :) Thanks for your kind reply.

Many cheats have many accounts on here sadly

I thought I read one day that you need to pay for having more than 1 account. But probably that won't stop people that are trying to earn money in a way it's not intended to.

Resteemed and here are my numbers @ilyastarar
47 and 147
Thanks for the opportunity! 😊

i just found this out and resteemed it.
my numbers are 9 & 16

Resteemed. This is really generous of you to do this giveaway. I will guess numbers 36 & 142

congratulations on winning the Steem Shilling Contest contest, hopefully always share the passion with others. never get bored in sharing about a contest hehe
congratulations once again i say @ilyastarar :D
my numbers are 17 and 87
the meaning of the numbers I choose is crazy
you 'mad' with the science of winning the contest

Thank you for sharing this post, first I congratulate you @itastarar has won the contest from @timcliff.
I chose the number 8 and 18.
Why I chose that number, because number 8 is a unique number and has a lot of philosophy, and why the front number I 18 because you won the contest on the 18th.

Congratulations on your award: I want to participate with 81 and 108

Very generous of you for sharing your prize :0)

Thanks for sharing your prize.

Thanks for the opportunity.
91 and 189 are my chosen numbers

We invite everyone to follow our @newbiegames account and use the #newbiegames tag for their next game or contest to connect with more of our members.

To learn more visit: I'M NEWBIE GAMES AND I'M INTRODUCING MYSELF TO STEEMIT. I'M HERE TO HELP YOU GROW & WIN

And My Numbers Are 33 And 159
Thank-you For Sharing You're Reward!

Resteemed. Congrats on your win. My lucky numbers are 7 and 129

Congratulations @ilyastarar .....Its really a good contest and you win 15 steem...!!! I think, you have a good quality to won this price..

Most of my favorite numbers are gone. I had the hard time finding the number that is unique.
Finally going with 41 and 179

And congratulation and good luck on promoting Steemit in future.

Thanks for giving back to the community.

thank you brother for arranging a great contest. resteemed.My number 59 and 146

Resteemed.
Karma is a wonderful thing and you're going to have plenty of good karma coming your may my friend! Very generous of you : )

Resteemed. Hopeful the winning numbers will be 46 and 179.