Rules of Survival:The Best Weapons in each type of guns!!

Hi there guys!! Today I'm gonna discuss the best weapons of each type! So, let's start!! 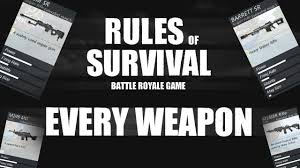 So,for me the Rubber Chicken is the best because, not only it gives you speed,but it can deflect bullets too,cause of course its rubber, make sense right?

Ok, I'm choosing Chicken Grenade here because it has the same damage as the ordinary grenade,and it has some extra radius. I did not pick the RPG because in the map Ghillie, it is very rare there, but in Fearless Fiords, it is commonly found at crates, not the supply ones.

Submachine Guns
SMGs are effective in long range (sniping) as the damage drops the closer the enemy is.

So, in SMGs I prefer Thompson the most, because of its magazine size, fire rate and recoil, is very good, excellent in combat.

Rifles have heavy damage with good range. Some of them can only be found in crates.
M4A1 This is a widely used assault rifle
AR15 Assault rifle with two optional firing modes. Found in various places around the map. Is the civilian version of the
M4A1.
ACR Replaced AR15 in the map, but is significantly better in terms of recoil.
AN94 Similar to the M14EBR, but does a little less damage. Is accurate, but only in single and burst fire modes
AKM A powerful and non-effective assault rifle with high damage. Found in various places around the map. Single-
shot and automatic firing modes available. However, its recoil is very high and hard to control.
M14EBR This weapon is somewhat rare to find in various places around the map. Can shoot in single-shot and burst f
ire modes. A marksman rifle, this is a good alternative to a sniper rifle if unavailable, especially if you have a
suitable sight
M249 A powerful light machine gun. Can only be found in Supply Crates. Unable to fit any attachments, other than
sights.
AUG Can only be obtained in Supply Crates, has automatic and single firing modes. Can share the same attachments
as the AR15 and ACR, but similar to AKM in terms of damage.

So, in here I prefer M14EBR because it is high damage and can be easily controlled, it has a very damage too, and it is easier to find to than an AUG.

Shotguns
The most effective in close-quarters combat. The range of shotguns is typically very low

M1887 A shotgun that can hold two shells at a time. Has a high damage output.
M870 A shotgun that can hold 5 shells at a time, can be fitted with SG bullet loop and SG choke
AA12 Fully automatic shotgun with a 5-round clip with extendable peripherals: EX, QD, and EX-QD magazines, while
unable to be fitted with an SG bullet loop or choke.
SAIGA-12 Semi-automatic shotgun with a clip that can be equipped with a muzzle and low-powered scope
attachments to increase stability; has the second highest damage.
WRO A shotgun that fires once before the need to reload.; can deal strong damage mid-range; shotgun with the
longest range; strongly relies on bullet belts; highest damage shotgun. SG bullet loop can increase mag. capacity
to 2 and SG choke makes it deadly accurate

So, in shotguns I prefer WRO, because in its default, in can only hold one shell, but if you attach a SC bullet loop it will increase in to two, which makes it more dangerous because, you could die with one shell,if not, its you're lucky day!!

Sniper Riffles
All sniper rifles come with a default sight, but every sight attachment remains available.

So first, let me explain the M110. M110 can only be found in the Fearless Fiords map. So, I prefer Barrett because it has a high damage and a pretty good accuracy, so if you're a good hunter, Barrett suits you!!

PS* I did not mention the hand guns because all of them are like the same. There is only two of them, I think.

nice on this.keep it up.hope everyone will be like on this gaming.go ahead and keep sharing

im following u and upvoted now.

Salamat chinito, followed you too!!