A small team of adventurers (@improv, @aussieninja, @justatouchfey, @paulag, @bashadow, @pbock and @hhayweaver) head out to find the forgotten village of Goldcrest. Unfortunately, the road to the village has been blocked by several land-slides and nobody has cleared the road so our brave adventurers had to leave their vehicles behind and continue the journey on foot. They encountered many zombies along the way and managed to leave the zombies behind by scaling a nearly shear rock wall. Unfortunately, they lost most of their weapons while climbing but they did get away from the zombies and have entered Goldcrest. While searching the local newspaper building, they found a post-it note indicating that the mayor and the clergy were having a big argument.

Later, inside the City Hall, they discovered the Mayor's ledger with the following scribbled inside: I told Father Jones not to allow it, but he didn't listen. We tried to isolate them with teleport technology but we failed. God help us now!

The team found a teleport terminal in the warehouse across from City Hall and figured that must be the way to access the church, so they all jumped into it and disolved, leaving behind all their clothing and anything else that was not part of their body.

Arriving at the other teleport terminal, the team members are rather shocked and embarrassed to find themselves naked and once again without any weapons! The only saving grace is that all of them are in the same boat and equally naked. Who would have thought that only living tissue could be teleported? Probably the inventor(s) thought that this feature would prevent the zombies from being teleported, but since they are living dead, that's probably why it didn't work as planned. The team also noted that all their injuries were healed during the teleportation! Bonus for them, but probably also works for any zombies going through.

No time to worry about clothing now... the team needs weapons! Thanks to whomever left those 2 axes and a shotgun near the teleporter!

Affiliate program links you may wish to take advantage of:

PublishOx Tip authors with tokens you don't own and keep up to 80% of it!
Narrative A platform similar to Medium. 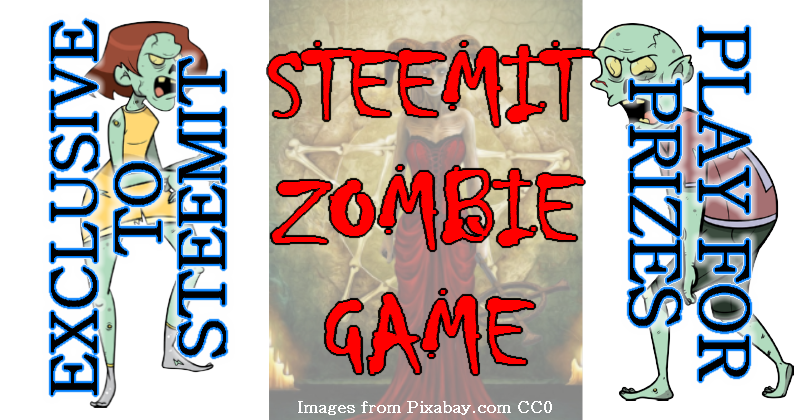 Investigate the (supposedly isolated) church area to see if you can find any gold and look for clues about why there are so many zombies in and around this village. Reveal the mystery and teleport back to the warehouse to retrieve your clothing and other belongings. (If the majority of players would like to try getting back to their vehicles, that could be done as another game segment. I suspect it should be easy getting out of Goldcrest itself because all the weapons will be there at the other end of the teleporter, however, after scaling the rock wall, it could be a real challenge! Please voice your opinions on this possibility.)

Inside one of the rooms of the newspaper office is a post-it note that reads: Mayor seen arguing with the Clergy.
In the city hall they found the Mayor's ledger which stated: I told Father Jones not to allow it, but he didn't listen. We tried to isolate them with teleport technology but we failed. God help us now!
In the warehouse across from the city hall is a teleporter that zaps you to the church area.

Additional twist: Before each player takes their daily turn, roll a D20 to see if you get any bonus. Please note that the bonus must be used during the CURRENT TURN. If you do not specify to which action you wish to apply the bonus, it will be applied to your first action where applicable.

Players can see a spreadsheet with their inventory and health here:

ctrl + L-click OR R-click and choose to open in a new tab (these are the ONLY solutions I found for opening a new tab/window).
https://docs.google.com/spreadsheets/d/1k5jXGMU9CF-9V3ZCz2YHGP7aswEiTizxfu4SBy-s2vI/edit?usp=sharing

The Rules of this game can be found here:

Everyone who plays gets daily up-votes on their comments. (Delegating SP will increase the vote value! This is way superior to SBI, so a good investment for ROI).
Winners can also 3D-print their own "survival" token using this link.
And
Winners may claim their buttons by copying and pasting the following code and proudly display them on their pages:
![SurvivedButton2.png](https://steemitimages.com/DQmTam1MrwcbLssSvPykpvUNYVY4aJKfhE2pQnTMwQRzzSh/SurvivedButton2.png)

Zombie Turn after the players made their moves:

All zombies pre-existing on the board move. For more options, read the comments section for a script you can use.

Don't forget, you can promote your own posts on the #happystream !

Submit
$1.66
41 votes
47
Authors get paid when people like you upvote their post.If you enjoyed what you read here, create your account today and start earning FREE STEEM!
Sort Order:
[-]
aussieninja (62)  ·  8 months ago

Bonus roll @rolld20
Action 1: Search in the dumpster with my torch @rollthedice

Of course it was bound to come up after all the good stuff was found... you found flour... and ... a Molotov.

Yes... a torch and flour and a molotov!! Time for a fiesta!

LOL... you just need water and a frying pan, then you can make flatbread.

Bonus roll @rolld20
Action 1: Move North!
Action 2: Shoot the hulk to the E with the rifle!

Yes a 1, one is so much fun.
Action 2: Street Zombies clear, time to see what is behind door number 1. Use ax and take a whack at the door.@rollthedice

Rolls for what zombies are inside: clockwise starting at the door.
@rolltwodice, @rollthedice Note that 2-dice is first.

You blow on two 6-sided dice, and throw:

Not much inside here; just a walker at the door.

That is good, except the not much inside, no notes or anything. Will I need to do a search tomorrow?

Nope! If there is anything important, it will show up in the map when it is updated in the morning.

Player 9 (First for once)

Ouch! At least you get an extra action to try once more.

one last attempt then !
@rollthedice

made à New entry to the Kriptomat competition 😆
what'cha think ? I couldn't find it here to vote on though? Nice to see surfer guy has been knocked off by a 40K something...

it takes a while to appear. I'll have to make a mention of it in my next design post once it's up and ready 😊

You blow on two 6-sided dice, and throw:

The hulk is now dead. Woot! Bonus roll @rolld20
Action 1: Move west.
Action 2: Use rifle to shoot at the walker to the south. @rollthedice

Walker has been killed.

Of course!
Action 3: Shoot at spawn zone 3 in anticipation of what is coming and just to be sure the shotgun is working.

I upvoted your contribution because to my mind your post is at least 6 SBD worth and should receive 224 votes. It's now up to the lovely Steemit community to make this come true.