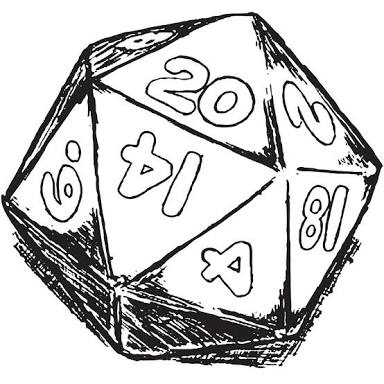 I have quite the passion for Dungeons and Dragons 🐉

Secondly, I've seen a few D&D initiatives around, I am a DM and a player, and will be looking to perhaps add some initiatives of my own, and join existing ones, so if you know of any experimental D&D concepts, or know of any groups in need of players or DM's feel free to let me know in the comments below.

Lastly I'd love to know what you think of the illustration, and if perhaps anyone would be interested to collaborate in doing character portraits please let me know. But more about this in another post. Mycroft comes from a family he would rather not remember or talk about, what little he cares remember of his childhood was of not fitting in; and dead things, picking through a multitude of deceased beetles, frogs and birds. A strange obsession that gripped him when first he questioned what about the mouse was missing that nothing would make it move again.

Ultimately his family gave him over to the church of Pelor, in the hope that those pious monks would perhaps cure him of his unhealthy obsession.

Indeed as the years passed Mycroft did slowly wean the habits. However the arts which the clerics tried to impose on him interested him not in the least. All attempts to lead him to Pelor’s graces, failed. Well almost all. In a bout of inspiration, an epiphany, Mycroft was able to learn one technique. A curative spell.

An old curiosity rose in him then, and before too long he held in his hands a newly dead toad, invoking that tenuous connection, he wove the finest net of healing on the toad and bid it rise! The spilt in its gut healed perfectly yet the toad remained motionless, lifeless, in his hand.

He knew betrayal then, and as the light of Pelor winked out, a chill touch was felt on his heart, and it whispered of secrets beyond the grave, of transition.

Transitioned indeed, Mycroft swore then to follow this greater display of power than ever Pelor had shown.
However he would do it by his own means. Leaving the dusty clerics to their temples, he took to the world.

Mycroft followed the scent of that particular power for years to come, gradually learned to find influence and truth in his cause. He sought ever to exercise his influence over people, like the unseen puppeteer. His actions won him some infamy, he used his sway to grow networks, becoming a member of several guilds.

Quite unexpectedly Mycroft gained some clout and roles in the running of a local adventurers guild. Although he had initially joined to infiltrate and further his own cause, he developed an odd sense of belonging among the misfits. He even consented to taking a class there teaching the roguish arts (entry level). He continues to seek power and influence, but now he seeks it for the guild too.

He has at least one thieves guild after him, due to stealing a drift globe and an ornate hand-crossbow from a prominent thief.

He seeks signs of Arawan’s hand in the world, has a fascination with displays of power such as angels or demons.

He had a run in with a mindflayer which nearly killed him, leaving his face scarred and pocked. They were mostly successful that day, thwarting an invasion attempt, but he will never forget a clear vision, staring into the abyss as mindflayers in their hundreds awaken to invade and prey on this world…

Additional traits:
Occasional kelptomatic impulses, however he is able to keep his fingers to himself when required.
Dominion over the meek, he believes his path is one suited to a ‘greater’ individual, this he often seeks to impress, manipulate or bend the wills of those he deems to be ‘beneath him’.
Fascination with poison, why stab repeatedly when a nick will do the trick! Mycroft is often keeping eyes and ears out for hints of toxins, he has also been blessed with the ability to occasionally detect poison and disease to further Arawan’s service.

Yaaas alive and kicking even in the grips of a flayer 😂😭🐙

Swift blunt stroke to a squishy squid-head should fix that ;) Congratulations @digitalpnut, this post is the third most rewarded post (based on pending payouts) in the last 12 hours written by a Newbie account holder (accounts that hold between 0.01 and 0.1 Mega Vests). The total number of posts by newbie account holders during this period was 1936 and the total pending payments to posts in this category was $1107.58. To see the full list of highest paid posts across all accounts categories, click here.

The @OriginalWorks bot has determined this post by @digitalpnut to be original material and upvoted it!

Excellent post, very well articulated. thank you so much.

Thanks for taking the time to read it, I appreciate the support.

Congratulations @digitalpnut! You have completed some achievement on Steemit and have been rewarded with new badge(s) :

I've got a big game brewing over at @battleborn! You should definitely check it out.

Followed, going to look to join!