I am sitting in a dark room lit only by a stuffed elephant shining green stars on the ceiling and listening to that same elephant play soft lullabies and the gentle sounds of my sleeping angel curled up in my arms. I've been in this position long enough for all my limbs to go tingly and my tummy to aggressively start rumbling from wanting to be fed. My head throbs and spins from a combination of not enough sleep and massive amounts of coffee, a combination all moms know all too well. While I'm sitting here watching his little face switch between sleep nursing to little smiles to uncomfortable grimacing (he's currently cutting teeth, poor thing) I can't help but feel overwhelmed with so many emotions. Joy from having him in my life and pride that I created and have helped nurture his little body from my body for his whole life and a bit of sadness because as all parents say it just goes so damn fast. This moment I'm currently in reminds me so vividly of when Kai was newborn and so incredibly stubborn that he would only eat if I sat up straight and cradled him like a baby. And he would only sleep in this position a good share of the time too. Lol. Good times. Day after day I held him and watched him sleep same as I'm doing now and would think how amazing it would be to sleep as well but of course I knew I couldn't. Instead I sat there in the dark and thought up delicious recipes to make to nourish my family. 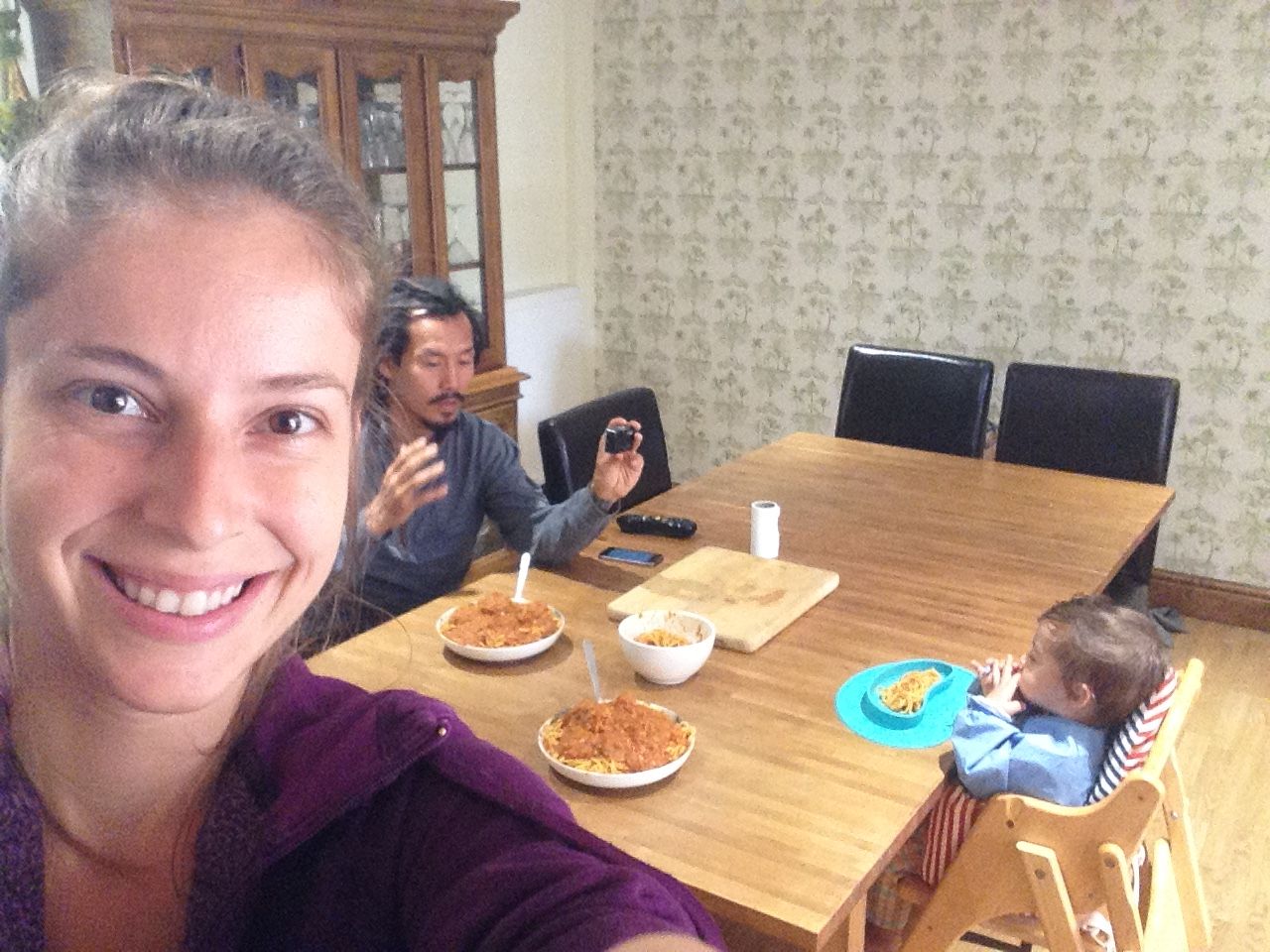 One of my favorite jobs is house cook. Ever since I can remember I have gotten so much joy from whipping up scrumptious treats in the kitchen then watching everyone devour them. Since my transition to veganism the love I had for food has grown into something much deeper. I am not not only in charge of creating something delicious to satisfy our hunger but I have since realized I am in charge of everyone's health as well. Powerful moment of realization. Sitting here, hungry, I am once again thinking about what I will cook up for my family when my little angel wakes up and BAM I have a light bulb moment! Lentil balls cause I'm currently obsessed with making various meat free meat items such as meatless meat balls and burgers and loafs. And it's cold and rainy today so duh make those with roasted bell pepper tomato sauce and finally pour all that goodness over gluten free pasta! Healthy easy delicious and so much yum!

For the meatless meatballs, aka lentil balls I cook a cup of lentils with a cup of chick peas and a large potato or two. I use dried ingredients because I like to stay away from cans as much as possible and use fresh or as fresh of ingredients as I can. So I cook everything till nice and soft then drain as much water out as you can and spoon into a blender with a few cloves of raw garlic and some lemon juice. Blend till everything is a big heap of mush, some lentils and chick peas still whole is fine and actually desirable in my opinion because it gives the balls extra texture so don't worry about blending too well. Could also use a potato masher if you prefer. Ok so then scrap all that into a large bowl and add dried oregano, salt, pepper, paprika, garlic powder, a whole diced white onion, about a cup of whole oats and mix well. Then I add oat flour (which I make by blending whole oats) little by little till the texture gets to be that of meatballs. Firm but not too firm. At this point I taste my mixture and play with the seasonings till they are just right then set aside till I'm ready to cook them up. Really they are already cooked so it's more of crisping them in whatever shape I prefer in the moment. Right now it's balls.

For my sauce I take about a kilo of whatever tomatoes look the best cut them in half and place on a baking tray, skins down and the juicy centers up. I deseed and quarter 3 red bell peppers, chop 2 white onions in quarters again, and toss on another baking tray with a few cloves of garlic (with the skins still on) drizzle with coconut oil or olive oil, which ever I have on hand at the time, and a pinch of salt and then pop everything in the oven. I bake on high heat till the tomatoes start to shrink get golden on top. And the bell peppers and onion I periodically give a mix around and I bake them till lightly golden as well. I think everything takes between 30-45 mins in my crazy little oven. I find it's a delicate process of getting things golden but not burning them but my oven is a bit demanding of attention so I watch everything bake very closely. For that 30-45 mins it turns into my special little television. 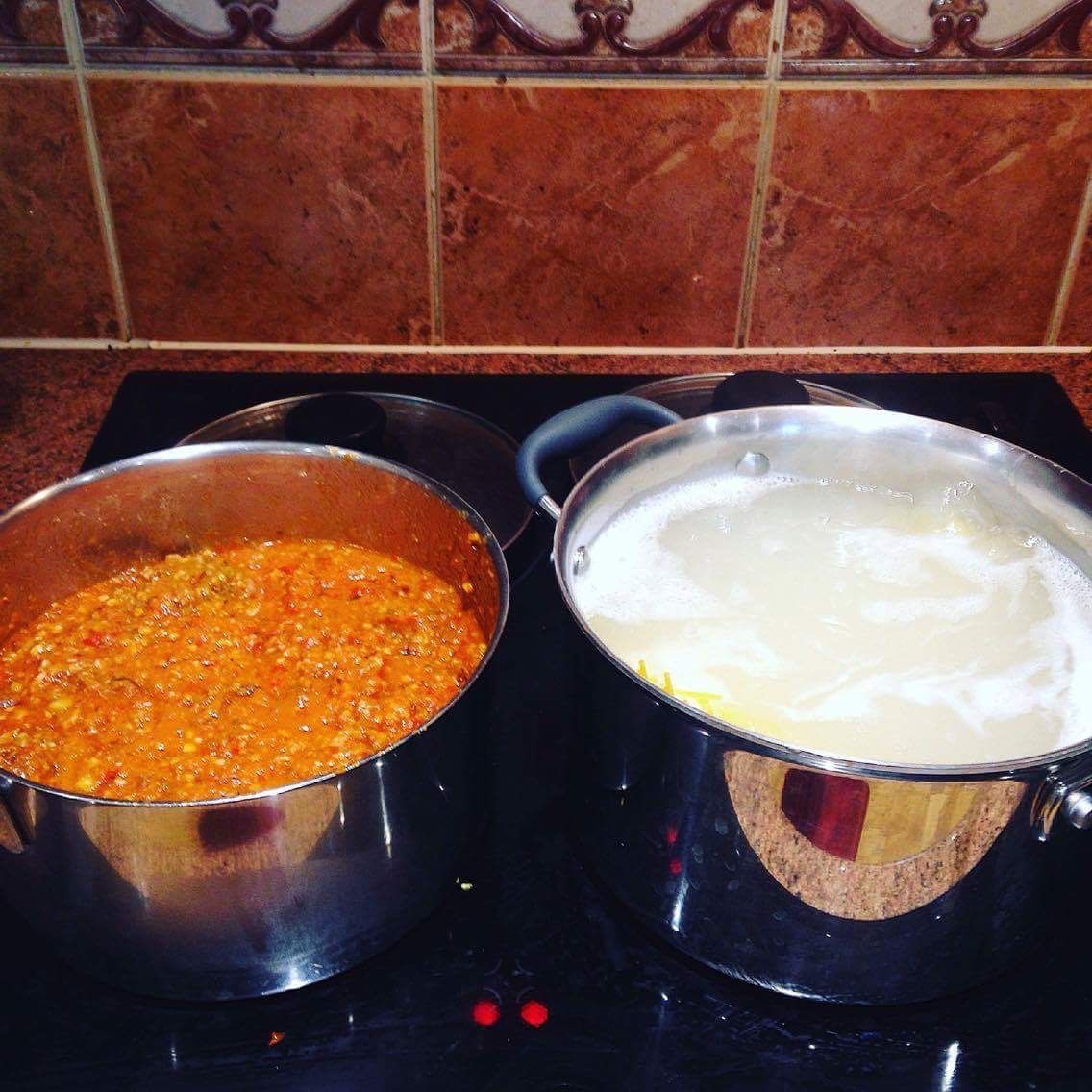 Once the vegetables are all happy I toss them all in a blender with some salt, pepper and dried oregano, squeeze the garlic out of its shell and blend it all up till everything is nicely combined. While cooking some gluten free pasta, which ever we have on hand at the time which usually it's rice noodle, I form the lentil balls and pop them in the oven once again on high heat till golden brown then remove and toss into the sauce, once the pasta is done so should the sauce and balls! Yay! Just drain the pasta, spoon the sauce and balls over top and there you have it! Delicious healthy meal everyone can enjoy! Submit
$115.15
107 votes
26
Authors get paid when people like you upvote their post.If you enjoyed what you read here, create your account today and start earning FREE STEEM!
Sort Order:
[-]
samstonehill (73)  ·  2 years ago

Thanx so much Sam! I really appreciate it!

Well that seemed to do the trick! Looks like my resteem has helped you nicely. And the fact that I upvoted you at 100% when it was still under $1 means that (combined with your votes to payout ratio) I will see a great curation reward from this too. So....thanks very much for that :)

I wouldn't have spotted you if you hadn't posted in our ASWD group!

I can see some big players who have come in and voted for you who are followers of mine, so this was no guild. This was genuine interest in your content and overall potential. Huge congratulations to you :)

Use this situation to push hard on the post promotion of this one now. Your votes to payout ratio is very interesting to those who actually understand who are the best people to vote for. (People who are getting high payout with low number of votes represent the best curation investments).

And a post like has the potential to gain you many new (non minnow) followers & upvoters. Don't bother promoting on the 6th day. People don't seem to care by then.

So much wonderful tips advice always! You and keni have been the most amazing guides through this steemit journey and I am so beyond grateful!

Wow, looks so yummy and nutritious. Gotta try it! Upvoted and resteemed.

Thank you so so much! And yes it is yummy! We did it two nights in a row! Lol

Thanx @pranjalphukan I really appreciate the support and I will certainly check out your story! Thanx for sharing it! ❤️

I like to eat healthy. Yesterday I prepared for dinner a delicious "wrap" with lentils.
Your recipe is so good. I've been looking for a while a lentil hamburger recipe but I did not like the ones I found. I will modify your "Lentil's Balls" in "Lentils's Hamburgers"

That's exactly the problem I was faced with so I just decided to make my own! Hope it works out well for you! Oh and please do share your modified version so I can give yours a try too! Lots of love!

Super yum! I am so glad I found your blog, I like your writing style, your food looks amazing and I too love to be the cook of the house. Nice to meet you, I look forward to your future posts @iamjamie.

Awwww thank you so much! It makes me so happy to hear people enjoy my posts! Following you back! Think your about me sounds quite interesting and am looking forward to reading more about you! Lots of love!

Thank you so much! I'm new to this whole blogging thing so I really really appreciate the great feedback! Will check your posts out! 😊👍🏼

I'm one of the lucky ones to taste @iamjamie's food and can I just put on record, her food is amazing! It always gets you to that point where you're so full and satisfied and yet you can't stop because it tastes so damn delicious! Congrats on another amazing post babe, love your writing and sharing your perspectives. Love love love <3

Thank you so much my love! I am so happy that you like my writing! It's been such a fun beginning of this fantastic steemit journey I can't wait to share more stories and recipes! 😍

Congratulations @iamjamie! You have completed some achievement on Steemit and have been rewarded with new badge(s) :

@iamjamie, Awesome blog. It appears to be a tasty dish. Will try it some time. Loved your narration and presentation. Keep it steeming !!

Thank you so much @topdog I really appreciate the feedback! Please let me know if you try the recipe and what you think of it! And yes of course I will continue to steem! Love it so much!

You are a Wonderful writer! You should write books. As a school teacher, I would love to see my students enjoy writing and expressing themselves in the way you do. And the food looks yummy! Cute picture of the family ~ it captures the everyday moments of parents wanting to capture every moment of their child's life! Loved it. <3

Oh my goodness gracious I am so flattered that you think my writing is good enough to write a book! Thank you for being so encouraging! Will continue to write and maybe one day a book. We shall see 😍

Hehehe! I know right! Eeeek! So exciting to see how well my posts are doing! Yay!