The Butcher of Porwia - Installment 1: Nightmares 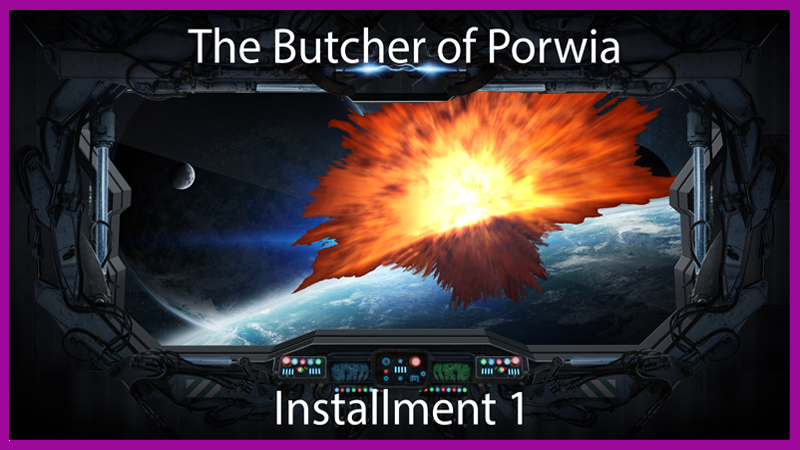 This is a working draft of a short story, novella, or novel - however long it takes to tell the story. I'll rarely post a first draft because they always suck, but some installments of this story may be pretty close to one. I welcome feedback, if it's constructive. I always want to improve my writing especially since sometimes I've lived with my stories for years. I know them inside and out, but when I write them what is clear to me isn't so clear to the reader. So be honest, but gentle in your comments.

None of the squad members could hear Kiera’s whimpers. She shook and cried out as her body began to shake and sweat. Her long brown hair became matted and stuck to her face and neck. The soaked grey tank top clung to her torso. The light blanket still covered her legs, a testament to how well the bed had been made.

“No!” she said as she suddenly sat up wide awake and breathing hard. She closed her eyes trying to hold on and see what was in her dream but it fled as her body began shaking more violently. Still, she held on, trying to will it to return. When nothing came, she grabbed for the Boost and expertly dispensed it into her neck.

She took two deep breaths to relax so the medicine worked quickly as she’d been instructed during her last medical visit. And in that time, her symptoms disappeared. She felt better, and also much worse. She wanted to throw the Boost injector across the room or to smash it. Every time she was close to understanding her nightmares, to remembering them, the condition took over, and she couldn’t focus long enough to remember the dream. It was the same she knew, but only because of the familiar feeling it left her with. It nagged at her, like knowing there was something she meant to say but not remembering what it is.

For a moment she gave thanks she was alone. As royalty, she was entitled to her own sleeping quarters. In her early years, she insisted on bunking with her squad but quickly realized that she only made everyone uncomfortable. She wanted to be seen as one of them, that she was willing to be an equal regardless of her birthright. But in the last year the nightmares had returned. She often woke up screaming-- or crying. Always she needed the Boost.

As her head cleared and her body steadied, frustration set in. Out here in the Torus Outpost, she was useless. Days passed waiting for an unknown, yet imminent, threat to appear. It’d been months and nothing had shown up. She had no purpose, and also no one to answer any of her questions. Well, there was the one.

Lithely she stood and moved to the small built-in desk across from the bed. The room was about 10 feet across and 12 feet long. Everything in it was standard military grey metal except the white sheets and pillow on the bed. Even the chair was cold metal, which made her shiver when she sat. Her status granted her privacy, but they were so far out of the Core that there were no luxuries beyond that.

She pushed the code to make a call and briefly considered canceling so she could fix herself up a little.

No, I want him to see me like this. He’s got to know how miserable I am out here, she thought. I must look awful.

It took a moment or two before she saw the “Unable to Connect” message on the screen. Rolling her eyes, she pushed “Record” instead. She sat for a few moments before she started to speak, hunched over the desk, resting on her elbows and looking off to the side as if she didn’t know the recording had started.

“Yes, it’s me again Zul. I wish this damned thing could connect so we could talk, but here’s another recording for you instead. I need to know how much longer we’ll be out here. Everyone is restless with nothing to do, and we can only train so much,” she pulled herself upright. “After eight months, I’m formally registering a request we be transferred to Heronis Station. It’s still out here on the Edge, but has enough services and distractions to keep everyone busy while we wait for whatever is supposed to happen out here.”

She felt a little silly demanding he listen to a formal request while she was disheveled and in her underwear. Sighing, she continued, “And at least there the communications channels function consistently. I need to talk to you, to see you…it’s getting worse. I can’t sleep, and it’s like the Boost just isn’t working anymore. Not for long as it should. I’m afraid there’s something really wrong with the dosage or maybe it’s progressed much farther than medical realized last time. I don’t know. I just know seeing you would make me feel better,” she managed a small smile for the camera. “That’s it. Maybe we can have an actual conversation when you call back,” she paused, “I love you.” Then she sent the message.

Glancing back at the bed she decided against sleep. No matter how much her body wanted it now, her mind was wide awake. Her hands hovered over the screen, unsure of where to start. In the months she’d been here she’d only done cursory examinations of the station's systems, ones that would be expected of her. But they’d revealed nothing. It seemed Torus was off the grid of the main Core, supposedly due to its distance. On the surface that seemed plausible enough, but on the other hand, it didn’t make much sense. The station served as a military outpost. It wasn’t a research station pursuing its own projects. The leadership here would need to be tuned into what was happening across the Core in case they were called upon.

They should be essentially the same as every other station, but the Commander wouldn’t look her in the eye when she’d asked for the data on their last readiness tests. It took him a day to produce the numbers, and though they were satisfactory, she didn’t believe them. When she’d gone as far to request additional exercises she’d received a cease order from Zul. Her mission was too sensitive to bring so much attention to her presence there. In fact, if the rebellion got word they would certainly attack and they’d lose whatever information they could have gathered from her secret mission.

His orders had been clear: Hide. Since that time she and her squad found themselves confined to their current level. Only a few station personnel knew she was still there. Remembering her situation brought the frustration back again. Before she’d been assigned out here on a “most important secret mission” of an unspecified nature, she’d begun investigating some odd things she’d heard about the fleet.

Not for the first time, she wondered if that’s what triggered her team’s reassignment. But she was confident she hadn’t been discovered. More likely it was forced downtime after refusing to listen to the medical officer’s order to rest and stay on her Boost schedule.

If he really cared my about me feeling better he’d actually answer my calls, she thought. It had been over eight weeks since she’d spoken to Zul on a live call. And he rarely responded to her messages. No, it felt more like punishment, like back when she was a child.

She was seven when he rescued her from the assassins that killed her family. In those early days, he acted as her protector, champion, and drill sergeant. Though she was young when it all happened, he never let her forget her responsibilities to the people of the Core - or to him as their relationship grew and changed.

She would do anything for him. But as she sat there in the dark, she wondered if he felt the same.

Thanks for reading! Installment 2 will be posted in a few days. Follow me if you want to find out what happens next. :)

That's a beautiful first installment. Trust me I can't fault anything about it yet. If I found one I'll share: I do that a lot 😉

Plot is building up very nicely. I love the pacing. Character(s) is relatable. English is pretty good, yet easy to understand. I'll give it to you on the formatting too. She does this professionally after all... I should tame my excitement. I caught up way back to your introduction post. Ahaha.

I just started to share some great posts I find here on my twitter and this one passed the cutoff mark. The organic reads may not give authors and curators direct reward in the short term, but it can serve to attract more quality creators to Steem in the medium term. That has its long term benefit.

Thank you so much for the compliment and sharing!

I do write for a living but that's non-fiction: blogs, web pages, white papers and such for businesses. But fiction is where I want to be. Thank you again for the encouragement and help to get the word out. Once I figure out how this all works and I'll pay it forward to others on Steemit. : ]

Congratulations @ntowl!
Your post was mentioned in the Steemit Hit Parade for newcomers in the following category:

Thank you! I appreciate the attention and I'll check out your witness info.

Nicely written. It flows well, and I am able to connect with Kiera's feelings of isolation and anxiety. I can't wait to read the next installment. I love how you build the plot quickly, while maintaining enough descriptive nature to keep the reader encapsulated!

Thank you @futuremind. I appreciate your support here and on discord. I'd planned the next installment for today, but I now need to go dig out from the nor'easter that buried us in some horribly cold white stuff just when I'd caught spring fever! But I'll do my best, Kiera needs the attention!