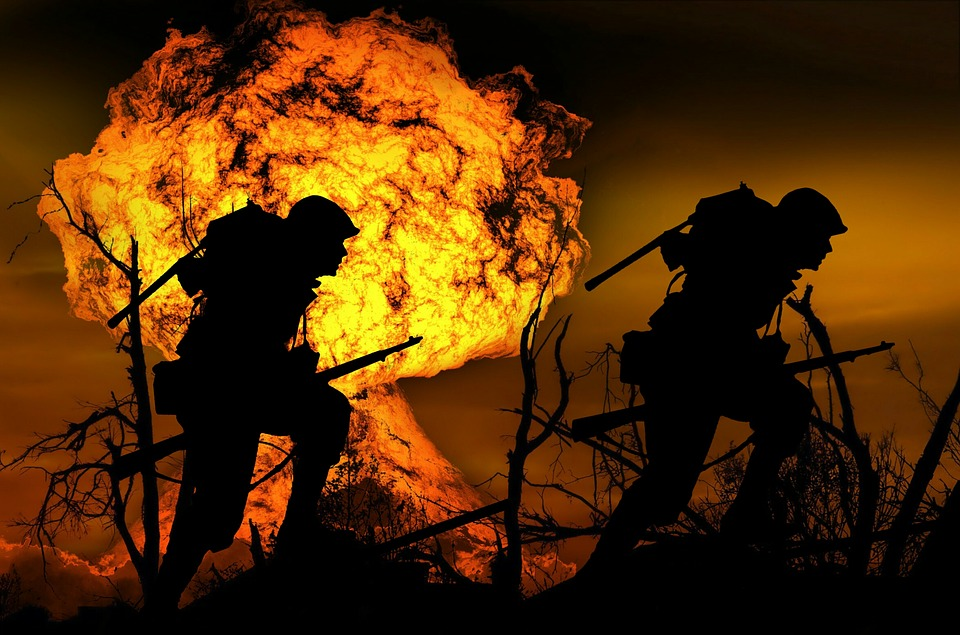 As the Reservists mobilized, the Regulars had evacuated the frontier towns, moving the civilians to the city of Celadon. There were no cars on the street, no lights streaming from the houses, no families or lovers taking a late-night stroll. Knowles had never seen the town so empty.

The only people here were legionaries. Parked at the edge of town, his weapon close to hand, Knowles peered out the windscreen of his truck and stared at the star-filled night.

“It’s anybody’s guess,” Kelvin Lake replied from behind him.

“Wherever they’re landing, we’re going to meet them,” Zack Wayne said. “Count on it.”

Knowles appreciated the sentiment, but he already knew the outcome. Ogma was a second-wave colony planet. Low on the list of defense priorities. The local High Guard squadron consisted solely of patrol ships. Good enough for customs duties, search and rescue, and orbital cleanup. Nowhere near enough firepower for combat.

“Those flashes are nukes, aren’t they?” Lake said. “Only reason we can see them from way down here.”

The lightshow continued for a couple of minutes. As abruptly as it started, the last flash faded. Moments later, the truck’s radio sparked up.

“All call signs, Hunter Six,” Fox said. “The High Guard’s been wiped out. But they inflicted heavy damage on an enemy transport, and the space observation platforms are still intact. Expect the enemy to make planetfall shortly.”

The High Guard’s space observation net was a swarm of pebble-sized satellites, virtually indistinguishable from space junk. The enemy couldn’t wipe them all out.

More waiting. More nothing. Ogma had a single surface-to-space laser array, the same array the Celadon spaceport used for orbital launches. It was a stationary facility, easy to avoid. The Horde wasn’t suicidal enough to force a landing within the laser’s reach.

But where else would they land?

A robotic female voice cut through the radio net.

Knowles’ heartbeat accelerated. Taking deep breaths, he willed himself to relax. This early in the game, the entire planet was at risk. Nobody knew where the rods would land until they made their retrograde burns. And if they were lucky, the rods might pass within the laser array’s targeting envelope.

OPLAN Gamma was simple. The closest available legionaries would probe the Horde’s landing zone and greet them with fire, delaying them long enough for the rest of the Legion to mobilize. But the enemy would expect that, and heavy casualties were expected.

It didn’t matter. The Legion had to go. They didn’t have to come back.

“We’re in their crosshairs,” Lake said.

The display updated. Eighteen rods were burning into the area of operations. Right behind them were twenty-eight dropships. And counting.

The red zone receded from the map. The Horde had targeted a forest to the northwest. Greensborough was safe.

“Polaris callsigns, Polaris Six. We have estimated position of the enemy drop zone. Converge at grid niner-seven-three-two-one-eight and prepare for dismounted hasty attack.”

“Time to get to work,” Knowles said.

Foster hit the gas. The truck surged into the night. On the map’s orbital view, Knowles saw the Horde space fleet spreading out, adjusting their orbits to cover the dropships’ approach. Anyone caught in the open would be lanced from above. The only way to avoid that—probably—was to get in so close to the enemy they couldn’t use their superior firepower.

Glancing out the window, Knowles saw more trucks forming up around his, rolling across the vast, empty plains. Knowles prayed the Legion would arrive before the warships were on station.

But if they didn’t, at least the Horde would only be overhead for a few seconds.

Blazing white streaks burned in the sky. They grew larger, closer, brighter. They were the incoming rods, burning in at hypersonic velocities.

The forest came into view. A hundred meters out, Foster jammed the brakes. Knowles slammed into the safety harness. The tires protested. The truck shuddered and rumbled to a halt, stopping right in between a pair of gigantic hardwood trees.

The Horde fleet was thirty seconds out.

Grabbing their gear, the legionaries piled out. Knowles sprinted deeper into the woods, his men right behind him. All around, the rest of the company entered the woods and abandoned their vehicles.

The defense AI cut into his suit’s radio.

Knowles flung himself next to a tree. Pressed his helmeted head against the dirt. Opened his mouth and—

Dazzling green light flared from behind him, reflecting off the trees and the clouds. The ground shuddered. Knowles’ helmet momentarily darkened his visor and shut off his hearing. Turning, he saw plumes of dark smoke rising above the trees.

Foster was to Knowles’ right, Lake and Wayne to his left. They were safe. Knowles patted down his coilgun. Magazine, check. Grenade, check. Power cell, check.

A constellation of shooting stars flared through the sky, hurtling right towards him.

He pressed himself against the dirt. Opened his mouth. Closed his eyes.

The ground quaked. Shockwaves slammed into him, rattling his bones, shaking his skull, pounding his organs into jelly. Terrible nausea washed over him, and the suit quickly injected a dose of antiemetics and medical serum. The world shuddered again and again, each quake like a terrible blow from the hammer of the gods, and it went on and on and—
It stopped.

His bones were rubber. His muscles were jelly. His blood was water. A terrible scream filled his ears. The scream of retrorockets. Trembling, he forced himself to his feet.

The kinetic strike had blown down vast areas of forest, creating a clearing for the dropships. He beheld a broken wasteland of shattered trees and broken stumps. His suit rapidly shifted colors, fading into the environment. Moving from cover to cover, he sprinted towards the landing zone, his men right behind him.

At the edge of the blast zone, he saw a massive shallow crater. A group of bus-sized dropships had landed within the crater, dropping ramps and disgorging men and machines. More dropships were in the air, burning their retros.

Knowles checked his tactical display. His team were with him. The rest of the company was close behind. He trained his weapon on the nearest dropship and lased it. His legionaries oriented themselves to target the enemy vessel. He settled into the prone, and waited for the rest of the company to catch up.

He pressed the trigger. His coilgun spewed a stream of five-millimeter hypervelocity flechettes, so fast they practically exploded on impact. Above the scream of the coilgun, he heard an even louder RIP. That was Foster’s squad support weapon, its ten-millimeter rounds blowing thick holes into the enemy spaceship. Hypervelocity missiles clawed for the skies, seeking the vulnerable underbellies of the dropships.

Knowles selected his grenade launcher and fired. The grenade flew straight and true and—

Exploded with a blinding flash.

Laser drones poured forth from the dropships, shooting down incoming munitions.

Withering fire swept the landing zone. Flechettes tore up the drones, grenades shredded men. Knowles called the targets for his team, adding the weight of his fire. The Horde was beginning to shoot back.

But it was too late.

The barrage came thick and fast and heavy. Kinetics pounded the invaders, airburst shells showered them in shrapnel, white phosphorus cooked the survivors.

All too soon, the barrage ended. His magazine was empty. He sped through a reload and looked up. His squad’s target was obliterated, and so was everything around it. But there were more ships incoming. He lased the closest, still burning its retros, and fired a grenade. The dropship’s laser turret knocked it out. But Lake and Wayne had fired their own grenades too, and the turret couldn’t catch all three.

The grenades destroyed a retro, sending the dropship into a fatal corkscrew. As the dropship desperately tried to compensate, a hail of slugs chewed up its soft underside and ignited a secondary explosion.

Before him was a wall of fire and smoke. Impossible to see through. But there were more dropships incoming. Keying the team net, Knowles called, “Moving up!”

Picking himself off the ground, Knowles sprinted—

—for a nearby stump, counting to three, and dove—

For more military science fiction, with a helping of fantasy, check out my latest novel HAMMER OF THE WITCHES.