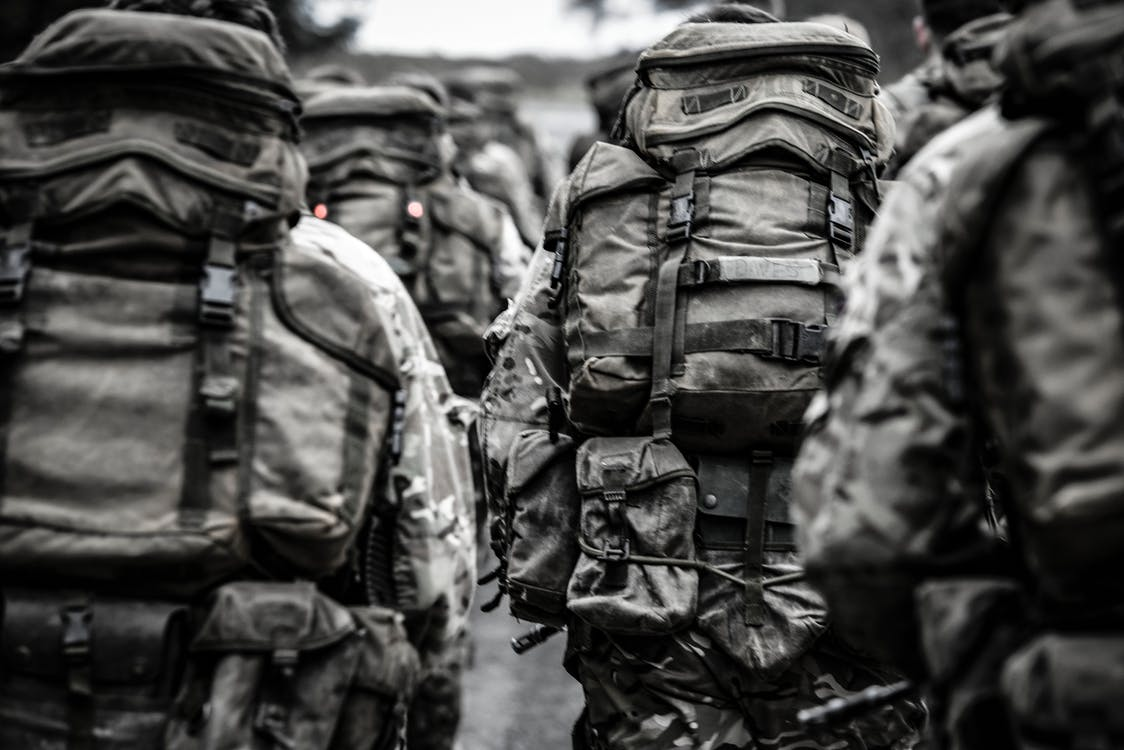 Perched in her favorite spot on the sofa, Laura stared incredulously at the holo.

A bright and bold and unmistakably 2D image flashed at the top of the 3D holographic window. A legionary on the march.

The Legion was recalling the troops.

Sam Knowles clenched his fists. His mouth went dry, his chest tightened. He took a deep, calming breath, and scanned the code words next to the legionary. He’d expected a recall, but he was out of the Regulars, he had a home, a family, it didn’t have to be...

He leaned over and kissed his wife of sixteen years. “I have to go.”

Getting up, he dashed into the master bedroom. Inside a little-used closet, he found a set of greens, a duffle bag, a rucksack.

The deep green uniform slid on comfortably, molding itself to fit him. He hastily inspected his bags, already knowing he had everything he needed in them. Drawing himself to his full height, he donned his black beret, did up his boots, and checked himself in the mirror.

His family were still in the living room, shifting uncomfortably on the sofas. Energetic dialog issued from the holo, but no one paid it any mind.

“Look after the kids for me, okay?”

Her eyes watered. “Be careful out there. Don’t be a hero, you hear?”

He kissed her on the forehead. “I hear ya.”

After his hitch in the Regulars, he and Joan were given priority for resettlement on the frontier worlds. Ogma was supposed to be a new start, a new life. He’d designed this house himself, designed practically half of Greensborough.

He sighed. He wasn’t a civilian any more. He had to start thinking like a legionary.

“Dad, are you going?” Laura asked.

He took in the sight of his three children. Laura, fifteen; Julie, twelve; Alex, eleven. They stared at him with expectant frowns, as though waiting for him to say this was one big joke, or maybe it was just a drill, that Dad didn’t have to go to war.

He clenched his fists and sighed.

“But Dad, aren’t you done with the Legion?” Alex asked.

Alex was just a kid. He didn’t know and wouldn’t care about things like the Regulars or the Reserves. All he knew was that his father was leaving. Again. Knowles took a moment to consider his next words.

Mere humans were unsuited for modern war. The life expectancy of baseline biologicals was measured in minutes. But legionaries were not baselines.

The sleeving center at Fort Gordon was packed with reservists returning to duty. When it was his turn, a harried medic checked him up, pronounced him fit for sleeving, and strapped him into the transfer chamber. He closed his eyes. Cold gel sloshed against his skin. Sparks danced across his temples. A high-pitched hum drowned out all sound. The world vanished in white.

When he opened his eyes, he was young again. Lean and powerful and supple. 20/10 vision, super-oxygenated artificial blood, lightning-quick reflexes, brainchips chock-full of technical specs and tactics. Looking into a mirror, he saw his eighteen-year-old self, head full of dark hair, smooth chin, eyes that carried the weight of fifty years.

Another medic examined the sleeve. Satisfied, they shoved his uniform into his face. Knowles clothed himself and hit the door running.

He sprinted down familiar roads, following more signs to his mobilization area, a multi-building complex teeming with legionaries and civilian contractors. Locating his company’s barracks, he entered his platoon office.

“Lots of people running around like chickens with their heads cut off. You know how snap mobilizations are like. For now, I need you to draw your kit and get your team organized.”

Three days ago, a warband of the Stellar Horde warped in-system. It was anyone’s guess whether this batch were raiders or traders. Or both. Everybody knew the answer now.

Knowles shook his head. “This was supposed to be a peaceful sector. Didn’t we beat back the Horde eighteen years ago?”

“The Horde doesn’t have a central government. Only a central philosophy. Anyone with enough funds, ships and manpower can call himself a Khan, form a new warband and go raiding.”

Knowles sighed. “Looks like we gotta teach them a lesson again.”

“Yup,” MacYoung said. “Colonel Fox is calling for a briefing at eighteen hundred. We have that long to prep the platoon.”

The next few hours passed in a frantic mix of preparations and administration. The procedures were second nature by now, but he adhered strictly to the checklists stored in his brainchips. Do things right the first time, that was the way of the Legion. As the twin suns crept towards the horizon, Knowles, MacYoung and the legionaries made their way to the camp’s auditorium.

“Y’all must have heard about the Stellar Horde warband in our system by now,” Colonel Alan Fox began. “Fifteen hours ago, they entered our Space Defense Zone, and are making a high delta-v burn towards Ogma on an insertion trajectory. They’re not responding to hails. We must assume the worst.

“The warband has six destroyers, twelve gunships, and four transports. That's enough carrying capacity for a heavy brigade. We estimate they will arrive within the next thirty hours.

“The High Guard will try to stop them, but—and this does not leave the room—they do not expect to survive the initial engagement. The Guard will hold the orbits as long as possible and do what damage they can. We’ve sent message drones to Terra to call for help, but until reinforcements arrive, we’re on our own.

“We are the Legion. We are the thin green line between the enemy and our families. We will not let them pass.”

Fox spent another hour describing expected missions, battle plans, what Intelligence knew about the Horde. Then the men moved out, drew weapons and ammo, packed up, mounted their vehicles and headed out.

The Ogma 3rd Legion (Reserves) was going to war.

For more action-packed sci-fi stories, check out my latest novel HAMMER OF THE WITCHES.