Getting in to ICOs - A Guide and Some Tips & Tricks

Recently, popular initial coin offerings (ICOs) have been selling out in a matter of minutes. Aragon met their 275,000 ETH cap in just 35 minutes! TokenCard raised over $16.7 million in ERC20 tokens in just minutes aswell. This post is aimed at helping you be prepared to invest within that short window of opportunity!

You want to do your due diligence and research the ICO before even considering investing. Some things I do are:

Once you've done your research, subscribed to any mailing lists, asked your questions, and decided you want to invest, the next step is preparing for the ICO itself. The most important thing to remember is that not all ICOs are created equal. There are many different was to raise funds and distribute coins, and understanding the process you're about to participate in is critical.

Take the Gnosis ICO for example. The price of GNO tokens were set to decrease near-exponentially over the ICO period, while the percentage of GNO kept by the company decreased linearly. Since the Gnosis ICO sold out in 10 minutes, 95% of GNO is now owned by the company and the tokens all sold at near the maximum $30 value. Many investors were upset at the lack of clarity in the ICO structure, don't get hit with a surprise like this.

Things you absolutely must know before the ICO:

Most of us used something like Coinbase, GDAX, Poloniex, or some other exchange to get our Ethereum, and it may be the case that our funds are still in these systems. Let me make this very clear..


Do NOT invest in ICOs from an exchange. You will lose your funds.
Why? This has to do with the way Smart Contracts used in ICOs work. The address that sent ether to the ICO contract address is the same address that will receive the ERC20 tokens, and your funds are not stored in one permanent wallet on an exchange. You must use your own wallet address to send ether to the ICO contract address if you want to receive any tokens. For this, I highly recommend MyEtherWallet, but there are many others that are arguably as good or better for this.
If you're not day trading, your funds really should not be on an exchange at all since there is risk that the exchange is compromised in some way.

So you've read up on the project, know everything you need to invest, have transferred your ether to a wallet where you can receive the coins, and are just waiting for ICO to start... Here are a couple tips that can help you beat out the competition and save you some stress.

I really owe CryptoPortfolio and his video "How to be on time during crazy ICOs" for this first tip. It requires that the ICO address is known ahead of the ICO, but can really help you get those early investor bonuses!

I picked this one up from Taylor Monahan, one of the two developers of MyEtherWallet on one of @Crypt0's videos with her. This still requires that you know the ICO contract address ahead of time.

The above tips both require you to know the ICO contract address ahead of time, but another VERY IMPORTANT parameter to know is the Gas Limit. Check out my other post about Gas if you don't know what I'm talking about. The project will generally announce the recommended Gas Limit for their smart contract once the contract address is publicly known. You do not want to set a value less than this or you run the risk of running out of gas and failing to complete your transaction. You also do not want to set this significantly higher or you run the risk of miners prioritizing more operation-dense blocks.

Another important parameter to know is the Gas Price for your transaction. On Parity, it is a parameter you must type in. On MyEtherWallet, there is a slider at the bottom left to adjust the Gas Price. 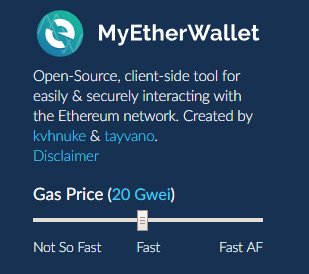 As it indicates, a higher Gas Price will incentivize miners to process your transaction. You can check out ETH Gas Station to see the minimum gas price accepted, and Etherscan to see current average gas price on the network. During ICOs, the average gas price increases due to network demand, raising the gas price is a must if you want in quickly.

Consider leaving a like or even resteem if you found this helpful! If you're really crazy, my MEW address is 0x5B13430b6D2E327DFCDB93D7430FC6e9a2E63E74. Please feel free to leave corrections and comments below :)

Would generating a signed transaction prior to the ICO start time and broadcasting it at ICO start time risk rejection on basis of it being signed too early and not within the parameters of the smart contract ?

Nope. Signed transactions don't contain any time-relevant data, so there's no way to tell if it was signed weeks ago or just recently.

A great article; very well worded for the beginner. Thank you. Would be nice to get some recommendations on Gas Limit and Gas Price for ICOs based on your experience...

Gas limit should be something the project tells you about beforehand. Gas price should be as high as your comfortable spending for a better chance. In my case, I might use a price that results in a ~$10 total fee if I'm investing something like $5k.

I should also add that transaction data used to interact with the ICO contract may be required to know ahead of time. Unfortunately, it's often unclear what exactly you need until the ICO has already begun.

If identical copies of a signed transaction are sent twice to an ico contract and both go through, would both transactions be executed or would the second copy be rejected as a duplicate ?

Each address has a nonce, a number that begins at zero and is incremented after every processed transaction.

I also want to know if you now Coinomi wallet ? And if you already have used it for an ICO (it is possible apparently, but don't find much on it on internet..). I am a bit hesitant to use this for the first time. Thanks!

As far as using it for an ICO, that sort of depends. If you have to set a higher gas limit or add transaction data and the wallet doesn't support that, then you can't use that application for the ICO. Most ICOs will require these things. I use MyEtherWallet on an offline bootable USB to sign all of my transactions, both normal and ICOs.

Ok, I'll check that in Coinomi. Maybe I'll switch to MEW since it seems to be the easiest. Thanks.

Excellent article! ICO are still a bit geeky and techie for a lot of people including myself. Here is a tip! hide

Priceless info! Thank you for sharing

Thanks for the great advice.

Thanks! Feel free to leave any suggestions for future content if you liked how I cover things.

With ICOs you can you lose 100% of what you have invested but your earning potential is unlimited. Long life to ICOs!!
Hope you get lucky with yours :D

This is not true in any way..

How so? It's very true you could lose 100%, granted 'unlimited' isn't a real measure of gain you could receive, but it's ~75% true if you consider potential growth >>> potential loss.

You can lose 100% if you're completely scammed and the price drops literally to 0, which isn't the case for any ICOs I've seen, even scam ones.

Earning potential is strictly limited by many factors, it's false to say otherwise. It's true that some ICOs will have large returns, but few actually outperform the growth of Ethereum. When comparing ICO value to the value of crypto as a whole, most are not very good investments (and that's while ICOs are in their prime right now, when the ICO bubble bursts it's going to be much, much worse).

Amazing inputs. Thanks for this. One question. Do you broadcast the signed transaction on to the Ethereum network before sending the transaction or after sending it? I am assuming it will be after we send the transaction.

Broadcasting the signed transaction to the network is sending the transaction.

thaks for sharing your knowledge.its helpful especially for the beginners.

Thanks for the article. Starting an ICO is not an easy task, it is so risky with the scams going on. But, I guess with the right approach and good ICO planning it can be very rewarding.

Join SKARA Bounty Program today and get rewarded with SKARATs! check it out https://www.skaratoken.com/bounty-program

Good points in this article. Same mindset here. It's facinating how people invest 10's of millions of dollars in "just an idea". I found this great website: https://www.coincheckup.com This site gives you a complete in depth investment analysis on every crypto in the market.

Solid article. Nice to see I'm not the only one who thinks like this. The popularity of the cryptos is currently determined by the biggest group of uneducated investors in man kind. It's an interesting world we live in. I was wondering if anyone of you uses: https://www.coincheckup.com For a complete crypto analysis on every single tradable crypto out there.