In this video I clarify why EOS, in addition to raising well over 1 USD billion, is worth taking seriously. The CTO of EOS, Daniel Larimer is behind scalable, open source, public blockchain technologies that have been operating in the market successfully for years, namely BitShares and Steemit.

I use this illustration to show that BitShares and Steem combined have more transactions than Ethereum and Bitcoin combined, using less of total capacity. 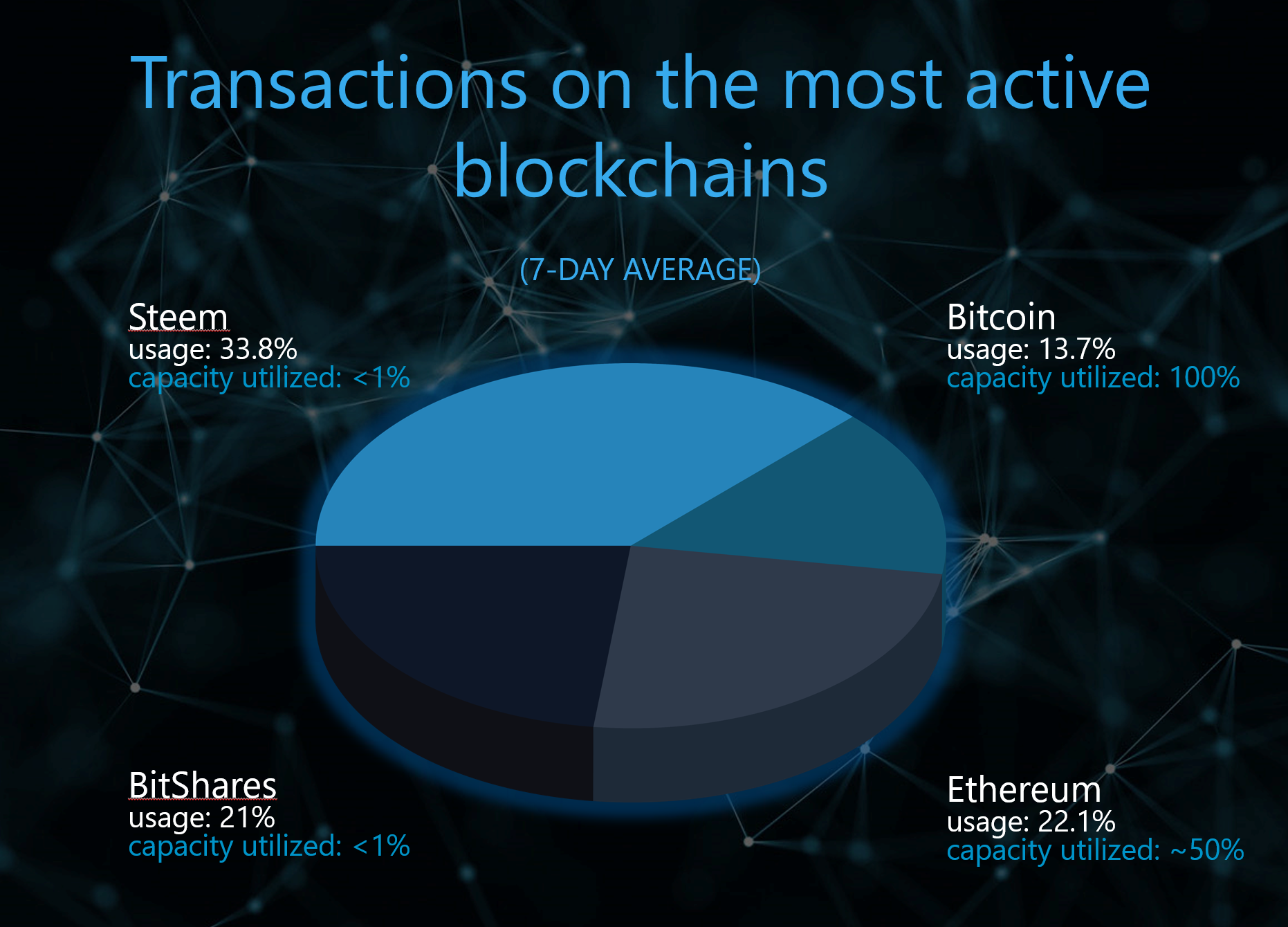 Seems like everything Dan creates is amazing. He's simply a genius. STEEM and bitshares are highly undervalued right now and EOS will be spectacular once it's fully functional.

I think this market crash was great for those who wanted to pick up some more STEEM, bitshares or EOS, because the prices are crazy low right now!

I believe all of these 3 tokens will be really huge in the future. Considering that STEEM and Bitshares already has more transactions combined that Ehereum and Bitcoin.

Yes, no doubt he is a genius. I can't wait more for this to be fully ready for use. I've been hearing of it over time. I think I should go deep about it now and act upon it as soon as possible. Thanks so much for sharing this @clains

I have a Coinomi wallet (andriod). I bought some EOS through the integrated shapeshift/changelly market in the wallet. It said

But nothing shows up in the list of coins. I you (or anyone) is familiar with Eth spin-off coins in Coinomi - let me know.

Listening now. You are clearing up a lot for me.

I am not familiar with coinomi but using https://etherscan.io/ enter your public ethereum address and check to see if your EOS tokens are there. You will see a drop down box with "Token Balances" next to it, click on that to view all tokens linked to the address. If you haven't already don't forget to register your ethereum address at https://eos.io/ to receive the real EOS on launch date (June 1) I use Metamask to do this. All instructions are on the eos.io site if you get stuck.

Wow, this is getting a load of new information, looking at it differently. Thanks for the information.

How do you think EOS fares compared to NEO and Cardano as up and coming smart contract/dapp platforms?

Wow ! So mind blowing just learbt about EOS of recent from a friend I met at a meet up .. With this I will have to check it out and take it more seriously ... Great of you to share this @clains

An enlightening post. I have been following EOS too. EOS promises to be revolutionary. Definitely better than other blockchains. There will be hiccups along the way.
EOS price prediction 2018 is that EOS coin will at $20. EOS price prediction for 2020 is that EOS coin will touch $150 very easily. There is very less risk if you invest right now as compare to bitcoin or Ethereum.

Thanks for this piece and enlightenment about EOS... I heard of it some times ago with through family member, but I don't take it so much serious, I think I will have to act upon now as the world is changing so fast. Thanks once again.

I must confess i love the way you made a breakdown in the video ... The awareness of @dan 's project i.e EOS is getting so much popular, well i am not surprised though because @dan is the man he is just too talented .. Great educative post here @clains

I am a big supporter of all the Larimer projects, my newest obsession being Steemit. I honestly think they are so undervalued. Bitshares was my first big (at least to me) buy..and I cant understand why it hasnt gotten the attention it deserves. I know that EOS isnt out yet, but I trust anything that Dan creates is going to be amazing.

I don't have much knowledge about this blockchain until I watched this video. Thank you for explaining @clains.

Appears like everything Dan makes is stunning. He's basically a virtuoso. STEEM and bitshares are exceptionally underestimated at this moment and EOS will be tremendous once it's completely practical. I think this market crash was incredible for the individuals who needed to get some more STEEM, bitshares or EOS, in light of the fact that the costs are insane low right at this point! I trust these 3 tokens will be extremely enormous later on. Considering that STEEM and Bitshares as of now has more exchanges joined that Ehereum and Bitcoin.

hi @clains this is a real eye opener for me. But, I wanted to tell you how I came across your profile. I was searching for an answer to an earnings question regarding steem on google and one of your old articles was indexed. So now I'm following you but it never ceases to amaze me that the value of steemit has in SEO and Google. Glad I found you though, I've learned a lot from perusing your last few posts.

Hi Christian, that was a nice introduction about EOS. I saw this abbreviation and the logo of diamond couple of times during different contests, as EOS was launching contest for the logo for T-shirts. Until now I had no idea what is it and if it is of any importance. It seems like our future is very much connected to those fancy words such as cryptocurrencies, Bishares, and new platforms like Steemit. For such people like me who belongs more to real world and not to cyberworld, Steemit is the one that is easier to understand and use. You mentioned yourself it is a social media, where people communicate, exchange the posts and been upvoted. But I think if I want to go in the same pace like the world I have to get informed about it, it is a future and we can't run away. By the way, I like that Steem usage is more then its capacity does it mean that there is much potentials in it? One of my friend told me that Bitcoin reached its peak and in near future is not going to be stronger as it is potential is used. Do you agree with that?

Its all virtual and imaginary, my opinion it has no solid background, without electricity its gonna... puff .. like a fart....and when i hear the numbers 1 milion one bilion ..why not a trilion? Really why we dont say crypto investments are at the moment close to a trilion...its anyway just numbers ..ppl that would know how to trace it..are a few...so lets agree crypto has all value and no value.. money you can not eat anyway...so you got crypto.. money and stores full of artificial food with a robot police dog that shocks you everytime you do a wrong virtual statement against him :)

I agree it deserves a serious look but not sure how its proposed Governance will be received - the Ricardian contract in particular and the role the Arbitrators will play, both of which may be roadblocks for early developers. Yes, build It... but they don’t always come.

Also it’s clearly positioning itself as the ‘enterprise’ platform which misses the mark in my opinion. We’re simply moving from plutocracy (old school Rockefellers, currently the Koch brother types ) to technocracy (the Dan Latimer types). So much for decentralization and the growth of humanitarianism. No real re-distribution of wealth there - just a massive transfer of fiat dollars, in my opinion.

On the other hand, Steem’s promise is vast and worldwide as a grassroots platform for the arts, health, education - in fact all of culture worldwide. So in my opinion, Steem and its SMT and Oracle expected launch is more worthy of taking seriously if for no other reason than as a tool to bring about real re-distribution of wealth the likes the world has never seen.

Finally, I make it to see your post for the first time. I just wanna say thank you for upvoting my post long time ago. I know it's random upvote and you don't know me but I wanna still express my gratitude to you! But I like the valuable information you shared in your post here too! Agan, thanks!

What a great publication I loved, very good information

Hi clan ,
why you post so rarely, well good to see you again
you are the 1st person who voted for my 1st comment on steemit :)

@clains, I hope this eos can evolve, I've read and watched your vidio, thank you guys you share interesting information

Yeah... great post. I am buying EOS whenever I can.... which I could buy more.

I have a little question and that is, do eos has more value than steem or do the two have the same rating or value

I wish I'd seen your post earlier. I have long been watching EOS. But did not dare to buy it. And now I certainly regret this opportunity. I will follow him to buy at the time of correction. Today 2 years ago you joined SteemIt
Thank you, for making SteemIt great and Steem on for more years to come!
(You are being celebrated here)
$0.00
Reply
[-]
singa (68) 2 years ago

I wish you success and new achievements!
Thank you, that heard a about Daniel Larimer and for video a separate thank you! It was very helpful to me to hear such information.

Beacause It is EOS^^ South Korea already has a huge community of EOS. The name is Koreos.io