Dîshmab Shorastbufut, the current mayor had decided we will venture down in the underground caverns beneath our fortress. She claimed it was for our benefit and safety, but most of us assumed it was only because she had been bored.

She had drawn a design to create a small underground outpost, almost 20 levels beneath our main fortress, with some workshops, storagerooms, bedrooms and a dining room. Only to keep our worker dwarves efficient with their tasks. Especially weavers, who should start to collect spider silk from the caves. 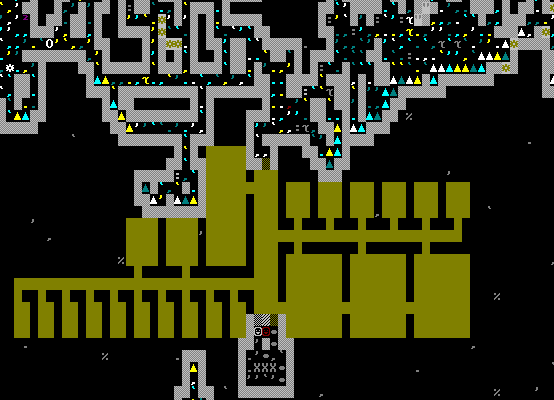 Nobody is surprised. She wants to be remembered as the greatest mayor to be re-elected and if she cannot build the wealth of our fortress with metals, she will do it with crafts and silk. Like she was a bloody elf.

And without surprising us, along with the spring came the elven caravan. No good items, merely wooden crafts, fruits and some clothes.

Then we all heard it. A horrible, bashing sound from the depths.

A pair of trolls had kicked down the door we had built and entered the fortress.

The troll which stepped in first was a huge one. It had an extremely long, coarse fur and black eyes, which were not very well visible from his black skin. The eyes seemed enormous with the skin being as black as the eyes. The second troll behind him looked very similar, but had a sharper nose and shorter head.

The short headed troll was more eager to enter and rushed upstairs toward the fortress. He got almost to the fortress levels, close to the fortress well, when he met a dwarf. Unlucky for him, the dwarf was armed with a hammer.

The dwarf was swinging the warhammer towards the troll, making multiple hits on the troll before it understood what was happening. The troll tried to strike back, but a bunch of other dwarves arrived and kept on hitting the troll with whatever they were carrying - or even with bare hands.

During the last few seconds the troll might have thought about retreating. The hammer was faster, striking through the skull into the brain. The brain was torn and the troll was dead.

Shem Kerlîgsarvesh the hammerdwarf ran down the stairs to find the second troll. He could hear the sound troll was making and even worse, smell it from far away. Shem stepped in the hallway in which the troll was standing on. The battle was quick but brutal. The troll didn't even have a chance, as Shem was bashing it with his hammer. The dwarf was wearing nothing but a light leather armor and still the troll couldn't even get a scratch on him. As a marksdwarff stepped in the corridor and shot at the troll, Shem lifted his copper hammer high in the air and once again bashed the hammer through the trolls head.

Before this day, Shem hadn't killed anyone. He was not a young lad, he was hundred thirty-two years old, but today he killed two dwarves. It didn't make him happy though. The sight of blood and death only made him fear. If he wasn't afraid for himself, he was afraid for his wife. What if the troll would have got lucky? He's trying to have a child with his wife, what if she is actually pregnant and would have to have the child.. all by herself.

But a fear is part of life. Stepping over the troll corpse and walking away from the turquoise troll blood, he knew he'll manage. Excited about the tales of battle and adventure we were exploring more of the underground caverns. To find all the dangers in them and to keep our people safe. We were a bit too excited.

Ïteb Sarveshusân, one of the longest lived residents of the fortress, saw a cave crocodile. It was huge and pale, gray scaled beast with red eyes. Ïteb knew how brave Shem had been so without waiting for the other dwarves, she attacked the crocodile with her copper mace.

The tales of adventure however are always a bit one sided. No dwarf will ever get hurt.

Today, Ïteb experiened the fear which should have been mentioned in the heroic tales. Her lower left arm was cut open and bleeding, the crocodile was staring at her with the red eyes and kept on attacking. Ïteb had no other choice than fight back, as she was in no condition to run.

Lucky for her, Kogan Uzolsazir ran to help. He was wielding his copper battle axe and he struck the cave crocodile down.

Unlucky for Ïteb, our fortress had a lack of medical dwarves. èzum Fashudib, one of the oldest members of the Fortress and the broker of the fortress was appointed the chief medical dwarf. He was a no friend of Ïteb, but had no grudge either.

The fortress has two medical dwarves. Skilled in surgery, bone setting, wound dressing.. but not in diagnosis and suturing. The two things Ïteb was needing right now. Even though we all knew she survived the battle, but will she survive the doctors? Note! In some of the earlier posts, I can see words like "DF15.PNG" in middle of text. I'm not sure if some of the images have disappeared or for some other reason these text have been forgotten in the text. Please don't let them be a bother.

nice story .. she lucky becouse there are a medical dwarves. Skilled in surgery .. but she could do was to wait.

Thanks, even though this is a game, I do hope she'll survive :)

thank you for your reply @apsu . me to I do hope she'll survive for read a other story from you

We'll see, luckily I've got 60+ other dwarves to ~die~ live if she happens to be unlucky.

This post has been upvoted and resteemed by @geekdom! Great work!