All my cousins 😂 Check out @chefskills 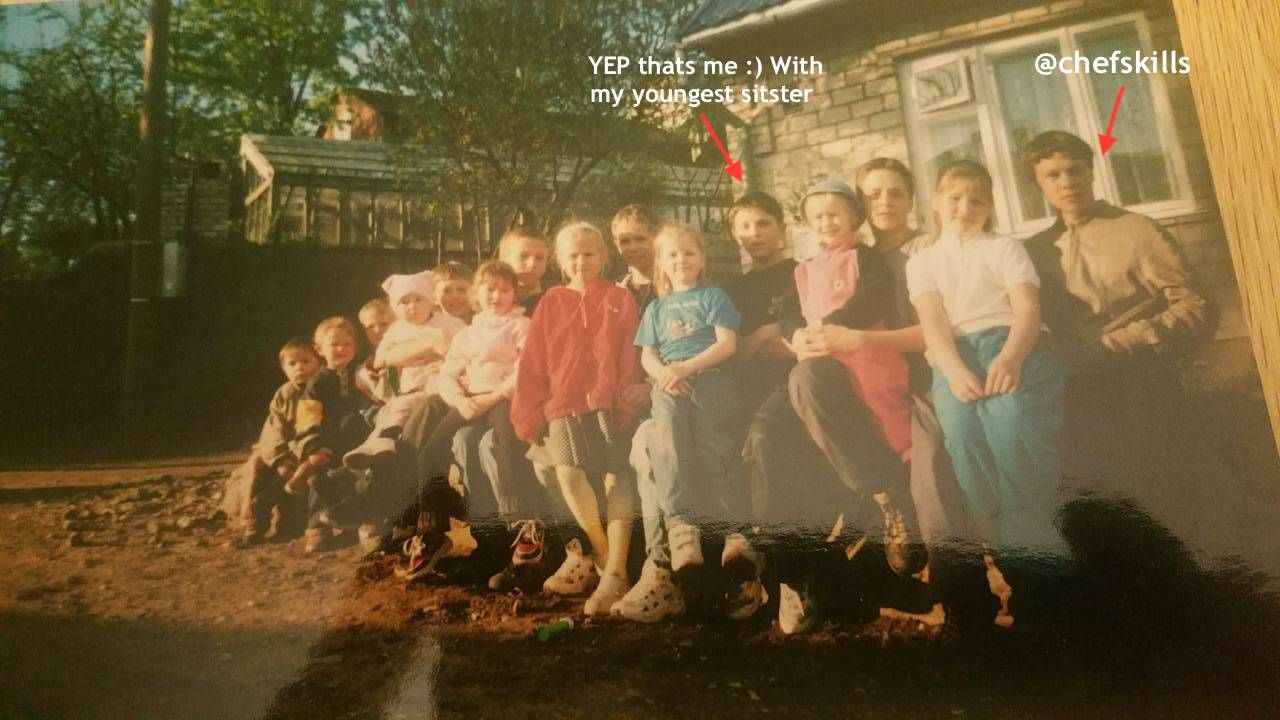 I was born in a small village called Valga, which is in Estonia. The total population was about 10,000 people. as a child, I had all the freedom that a kid could want. I was the third child; just two sisters and me for a while. Then, when I was six, my younger sister was born. We lived a very modest lifestyle. My dad was almost never home since he was working hard to put food on the table.

This particular story takes place in 1991 when I was two years old.
I had a very high fever. My parents tried everything that knew to bring it down, but nothing helped. So they took me to the hospital. Back then in Estonia, hospitals were terrible; not necessarily the place itself, but rather because of the people who worked there. So many were not properly educated in medicine.
I remember clearly how a nurse tried to give me a shot of antibiotics in my butt, but I had a bad feeling and fought back. My dad grabbed me and held me down, and the unthinkable happened! (the antibiotics were supposed to help bring down the fever, but that was not the case).
After few months I completely lost the hearing in my right ear and later on, I lost my balance and couldn't’ walk.

My parents took me to hospitals in Moscow and St. Petersburg to see doctors, but it was too late to do anything. The nerves in my right ear had died. I started learning how to walk again. What really helped me is one summer I started walking on pebbles, which restored my sense of balance. At that point, I dreamed to walk again like a normal kid.

When I turned seven, I went to the first grade. It was a struggle for me.

All of the kids laughed at me because I walked like I was drunk. Furthermore, I was not a great student. Back then all teachers were re-teaching children who were left-handed to write with their right hand. Unfortunately for me, I was a lefty. Thankfully my father and mother constantly insisted that I be allowed to write with my left hand, and so to this day, I’m a lefty.

As I grew older, one of my dreams was to be a gymnast. That sounded ridiculous and back then we didn't even have a school where I could learn gymnastics. Regardless, I held on to that dream, until I turned seventeen; but that’s a story for another time.

This photo was taken in 2012
Santa Cruz
California When I turned twelve, we moved to Estonia’s capital, Tallinn. Two years later we left Tallinn and made the big move to Rochester, NY, in the United States. At first, it was hard to acclimate to America, especially to not having any friends.
Rochester in particular was a city where my family struggled to make friends and thrive financially. So two years later we moved to Denver, Colorado, where I was surrounded by beautiful mountains and a much friendlier community.

Me with my younger sister. Despite the move to a better city, my family was still on a very low budget; I never had personal spending money. When I turned fifteen, I got my first job. It was washing dishes and peeling potatoes at a restaurant. After a few months, I found a slightly better job, cleaning offices and park cabins at night with my buddy.

One of my more memoral jobs, however, was working for a little Italian restaurant in Denver, called La-Pizzeria. It was there where I learned how to cook and make the most delicious thin crust pizzas from scratch; but only after perfecting my skills as a dishwasher :)) Some clips are copyright free, rest of it is my work.
Song is by: Matthew Parker - Adventure

I encourage you to publish your own work.

Such a wonderful story of overcoming obstacles, succeeding and becoming an example. Thank you for sharing this with us!

You are welcome. It was a bit difficult for me to share this story with the strangers!

you did it well!

I loved your story. Honestly, I think it's a story of overcoming and perseverance. Since you talk about how you were like a left-handed child, now that I remember I never understood what was the obsession of the teachers or adults to turn the left-handed child into a right-handed one. I think our problem is cultural. A left-handed person is not better or worse than a right-handed person. Forcing lefties to write with the right hand only serves to make us believe that being all equal is good and that is false. In diversity is beauty. Very good post. I follow you to continue reading you. Regards!

born in the 20th century - a real eerie test. you are hero

Thank you @bloggerslife for making a transfer to me for an upvote of 3.30% on this post! Half of your bid goes to @budgets which funds growth projects for Steem like our top 25 posts on Steem! The other half helps holders of Steem power earn about 60% APR on a delegation to me! For help, will you please visit https://jerrybanfield.com/contact/ because I check my discord server daily? To learn more about Steem, will you please use http://steem.guide/ because this URL forwards to my most recently updated complete Steem tutorial?

This post has received a 10.29 % upvote from @booster thanks to: @bloggerslife.

That Is Super amazing video!!! Thank You Mark!!!!!

:D You should give me a private lesson on how to edit that epic video !

Im not that good yet :) Wait till I buy good equipment. lol

It looks like it is so much fun there where are you from?

Im from all over the place. At the moment in Australia.

This post has received a 9.26 % upvote from @boomerang thanks to: @bloggerslife

Who is this Guy? I want to meet him. lol

I look forward to the continuation!

It looks like your life was full of surprises. Im glad you went through tough times.

Congratulations @bloggerslife, this post is the fifth most rewarded post (based on pending payouts) in the last 12 hours written by a Newbie account holder (accounts that hold between 0.01 and 0.1 Mega Vests). The total number of posts by newbie account holders during this period was 4931 and the total pending payments to posts in this category was $5431.48. To see the full list of highest paid posts across all accounts categories, click here.

Your life was full of struggles, that made you so strong that you have walked past all of them and achieved new heights.

I am glad you achieved what you always desired and it is a dream come true story for those who are still struggling out there.

I hope I can be a good example for people who is struggling.

Cool. Inspires me to add more to my videos. Did you film and edit this yourself?

Some clips are copyright free, and some videos are mine. Editing I did it my self.