WOW! MUCH ENDORSEMENT! John McAfee Selects Dogecoin as Coin of the Week on Twitter Blockchain warlord John McAfee has named Dogecoin as a coin to watch as part of his ongoing "Coin of the Week" series on Twitter, in which he draws attention to coins and tokens he believes to be worth watching. Until today, the primary focus has been on highlighting interesting ICO tokens, giving Dogecoin the distinction of being the first base cryptocurrency in the series. Dogecoin was unleashed upon an unprepared world in 2013 and was originally intended as an inside joke for the cryptocurrency community. The coin was based on a popular internet meme featuring the cartoon likeness of a Shiba Inu dog. Based on the Bitcoin source code, one distinctive difference is that there is no limit to the number of coins that can be mined, allowing for a wonderful utopia of an unlimited supply. There is enough Dogecoin for everyone to enjoy!

Dogecoin may have been intended as a fleeting joke that would die on the vine, but this was not to be it's fate. Instead, it was embraced by an eccentric faction of cryptocurrency enthusiasts that refused to allow the joke to die. Other coins may be better, smarter, but through sheer stubbornness and a refusal to go away, this vibrant community lovingly nurtured the coin to the point where, as of this writing, it has a market capitalization of $1,694,801,684 USD. This may be the definitive proof of the existence of a Supreme Being that mankind has been seeking since the dawn of civilization.

The only question remaining is whether McAfee paid in Doge for his new Bentley and the obligatory hookers and drugs that every Blockchain Warlord requires to live. In an earlier tweet, McAfee claims to have paid for all in cryptocurrency, though he doesn't specify which. One can only hope. For those new to cryptocurrency, Dogecoin is a great way to learn the basics about holding and moving coins without risking anything. In fact, you can claim free Dogecoins at any number of "faucets" by completing a few simple puzzles. My favorite is the Moon Dogecoin Faucet. The official Dogecoin software works just like other coins and the knowledge you gain can be reused with higher stakes.

And while you're at it, you may want to follow John McAfee's official Twitter feed along with the 600,000+ other people tuning in for his "Coin of the Week" series and for a perspective that cannot be found elsewhere. Love him or hate him, McAfee is an original article. And though no one gets it right every time, the wisdom he is sharing is going to make a lot of people rich.

Content displaying this logo is published exclusively on Steemit. Why not make it easy on yourself and join up today!

Wow, I can't believe John McAfee actually tweeted this and you have over 10K views in 8 hours but aren't getting votes. I've upvoted this and spread it around steemspeak for you.

Thanks for the support! I've found that many people (boring, humorless people, no doubt) love to hate on McAfee, and when I cover him my work is affected. I have, in the past, received threats after publishing similar pieces. Thankfully, for all involved, I have an ace up my sleeve: I simply don't give a damn ;-)

McAfee is great! Humor is a sign of intelligence. Perhaps that is what they dislike?

I agree he's awesome. Can't wait for him to eat his own dick like he promised.

Nice post. Love it! Also the video on Hitler hates Dogecoin is hilarious too. Guess crypto is in an intressting period right now. Everyone has to decide by himself which people he follows and what decision he thinks are the best. In the end its everys persons own money on the line.
Its the year of the Dog oh wait i meant Doge :) oh wait maybe a week. xD

Where does the money come from?

What money? has he edited his post or something?

One addition, Do you know we have the guy called The Needle Drop on steemit now?

The big youtuber who just joined our platform is @theneedledrop, also known as Anthony Fantano. Anthony has over 1.2 million subscribers over youtube and he is so big he even has his own wikipedia page.

That is a lot of massive media attention to steemit. We are getting there.

This has just been shared on twitter..!! Watch the viewer count go through the roof..!! Resteemed for support. Stephen

This was just brought up on SteemSpeak and we're sending it some love. Guess it's a good sign for Steem that John has read the article here... :)

This is one reason I am promoting the concept of Steemit Exclusive Content. If something is published exclusively here, people that want to read it have to come here. In this case, I shared the link with McAfee and he shared it with the world. I would be surprised if this did not result in some signups for the platform.

Much WOW, Doge has always rebounded nicely. It seems to sit at all time lows of 17 satoshi and then BAM a few months later we are back at 100 satoshi + this has repeated about 3-5 times now.

I am also surprised myself, i have really underrated dogecoin, i guess i have to change my orientation about them

Not sure if that's wise. What's actually underpinning the value of Dogecoin? What actually relies on Dogecoin? Seriously, look at the code repository for Dogecoin before you think about investing. This coin hasn't seen any development in over two years aside from some minor configuration changes. 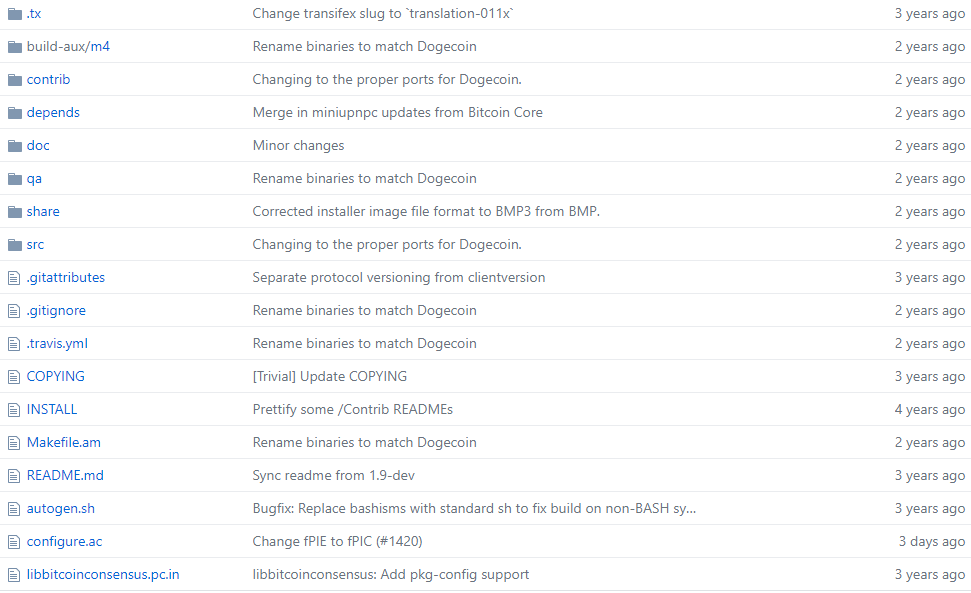 Every crypto has seen massive surges over the past few months as investors new to the space look for the next cheap coin that they hope will skyrocket them to crypto millionaire status. Eventually people are going realize that a lot of these coins have no purpose or value, and the coins might very well crash and burn.

Dogecoin has value because it's a well-known meme. See /r/dogecoin. If you're in it for short-term trading, you might make some cash, but long-term this currency has stagnant development and there's much more value in other coins that have actual products on their blockchains.

According to Palmer the co creator of doge Doge will be implementing segwit soon! Order Steem to be next! (Which probably is in his list anyways!!!)

Here is another ''coincidence'' regarding Dogecoin. CNBC uploading a YT vid about it, 3 days ago:

Dogecoin Was Created As A Parody, Now It's Worth More Than $1 Billion | CNBC

I wrote to him last week suggesting that he support the industry by using Steem to release his Coin and ICO of the Week.

The more people who do it, the better!

Congrats on the Tweet by The Master of Blockchain himself! Big support to you!

Of course he recommended DOGE after I sold mine :( :(

Hahahah I don't know what to think about this guy anymore... now dogecoin? Was he hacked again?? Thats hilarious! I love his free spirit though

Certainly a welcome change to the many humorless people that apparently exist in the cryptosphere. If you don't believe me read some of the comments from his twitter feed. And yet... they still follow him. Just can't help themselves. :-P

Doge to the moon

Your article has just lit a bonfire spotlight for steemit and steem Blockchain. I can't believe it!

John McAfee is onto something here.

Gave you a full upvote for what it's worth because of the 13+k views. You've just shown steemit how a future post will look like.

[edit] also my attention was brought to your post because of John McAfee. Good job! 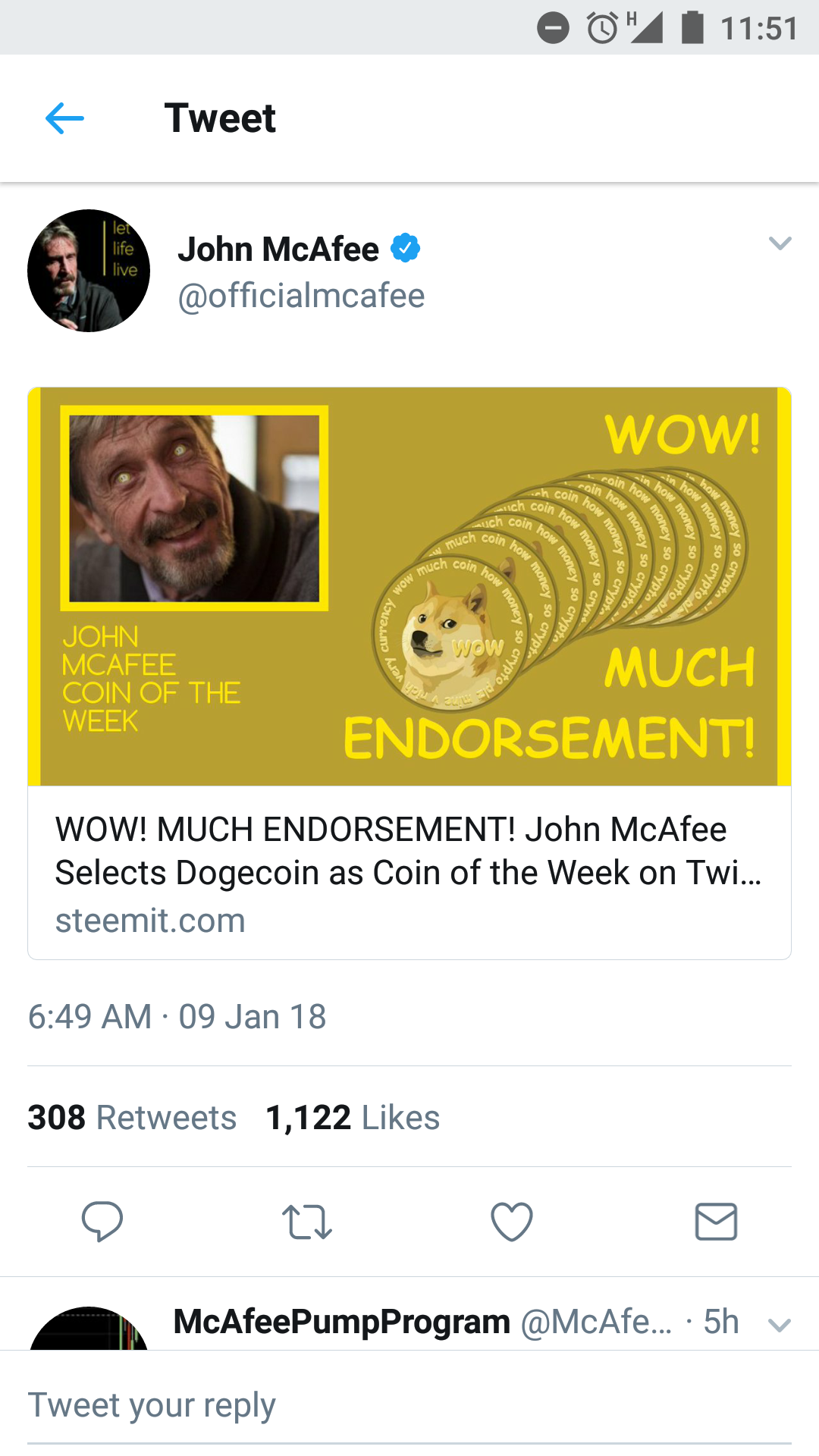 Very satisfied with the results. I've confirmed several new users on the platform, which for me is a big win. I believe this also demonstrates the power of content that is exclusive to Steemit. I realize many producers need to earn a living, but setting aside some content that only appears here, and highlighting that fact, is a great way to promote the platform where everybody wins.

Welcome to a world untamed. I love it <3

Lol, I have no idea what to think anymore. What the hell.

Welcome to the new reality. If you experience discomfort, please try and make it to one of the designated restrooms. Yes sir! @officialmcafee back at it again! Upvote this if your early to the show! lol @loggiaonfire

I heard him say, that he will never join Steemit and run his blog here. Also I doubt, that this post will automatically become viral just because the king of hype tweets about it. Anyway, I wish you good luck and congratulations on the publicity. :) Please share with us, how this tweet has affected your account - it´s interesting to watch...

I've learned never to say never where McAfee is concerned ;-) So far this article has moved account reputation up a point and netted about 50 followers. If there are any further interesting results I will share.

I must diversify and key into this dogecoin

Its being making wave on all social medias platforms today

Convinced me to get a solid gold dogecoin to replace one of the B's on my Bentley's wheels, so good on you.

Shame all those views are not steemit users.
Upvoted!

The power of a fully maximized steemit post. Stay awesome!

This...this is the reason I love cryptocurrencies. This is a front row seat to the theater of human creativity. That a joke could actually breathe life into an economy just makes me so giddy.

Dogecoin got to space.

IT'S GONNA SHOOT PAST THE MOON.

I'm not surprised it's succeeding. What's wrong with a joke? Everybody likes it!

Wow, I can't believe John McAfee actually tweeted this and you have over 10K views in 8 hours but aren't getting votes. I've upvoted this and spread it around steemspeak for you. 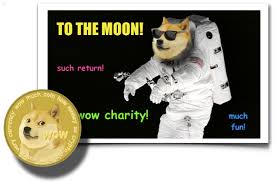 Lucky enough to be retweeted by the man himself!

In for a penny, in for a doge.

McAfee has lost a lot of credibility recently, which is a shame because he is really knowledgeable. Unfortunately he represents the immaturity of Cryptocurrencies and is actually damaging the industry in many ways with his pictures and silliness...

If the damage he inflicts is to keep away humorless people that approach life with a negative attitude, I view that as a gain for cryptocurrency. I am one of the many people that believes the primary objective should be the elimination of the masters of the universe, not gaining their respect. "Credibility" is synonym for "Owned" in our brave new society. I applaud people that are into crypto to make money. Good for them. But that is not my primary interest by a long shot.

People is fixated with McAffe