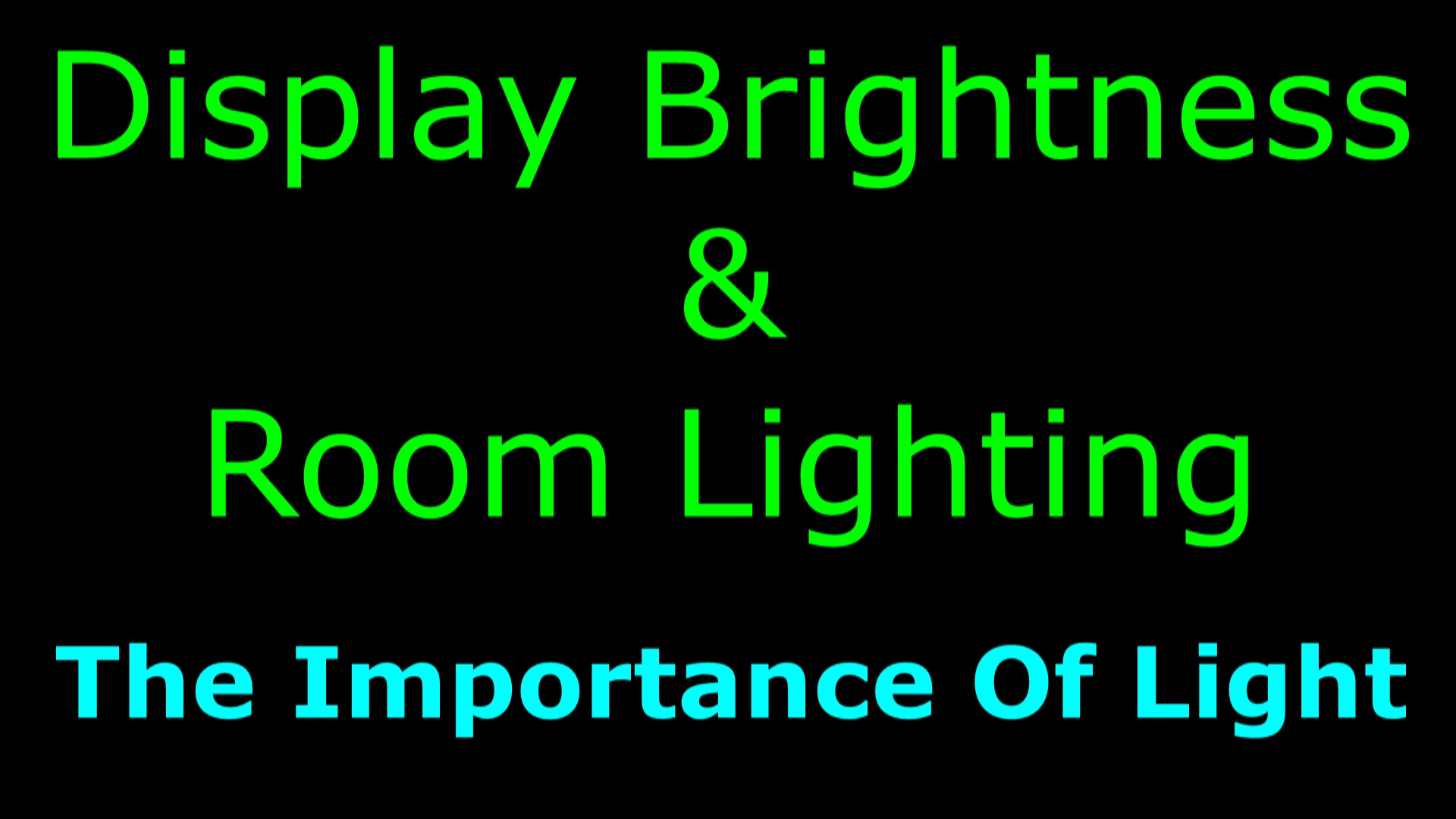 Should one set their display brightness to maximum or 100% in the menu?

The answer is no most of the time, but displays typically come preset with their brightness set to 100% in the menu or On Screen Display (OSD). Figuring out the right balance between display brightness, room lighting brightness and display placement are key to ensuring a display looks as good as possible. Display Placement Guide:

IPS vs TN: Right & Wrong Ways To Use Or View; How To Vastly Reduce AHVA/IPS/PLS Glow & Increase The Perceived Black Depth & YouTube Version

This post is part of my display improvement guide series which addresses the importance of display and room lighting brightness, display placement (distance and height) and display brightness.

All monitors were calibrated as well as possible using their menu settings with an X-Rite i1 Display Pro colorimeter and Spectracal C6 HDR2000 (October 2017 and beyond), matched to 140cdm/2 brightness and connected to a PS4 or PS4 Pro (late August 2017 and beyond). The same camera settings and same 15$ CFL Philips 2600 Lumen Daylight/6500k Light ceiling light were used for all photos. I use a colorimeter and change displays Brightness settings in the menu to output 140cdm/2 when measuring white since it pairs nicely with my 2600 lumen ceiling light.

Source image is a screen shot from The Order 1886 on the Playstation 4 by developer Ready At Dawn: This level in The Order 1886 is a dark night time stealth level which looks like a day time level when the Viewsonic XG2703-GS's default maximum brightness is used with my very bright 2600 lumen ceiling light. At 100% brightness the Viewsonic outputs 373cdm/2 when measuring white. The HDR standard advocates for 1000cdm/2 or lumens of the brightness of white, and the common brightness of house lights is 800 lumens or 800cdm/2 or less.

When the lights are off the monitors low contrast (1000:1) or high measured black depth becomes quite apparent. Lowering the brightness helps greatly, but the display is too bright and its contrast is too low for light-less use. A VA panel with 3000:1 contrast or higher looks fine in a light-less room if it only outputting less than 80cdm/2 white. Perhaps an OLED would look fine with high brightness in a dark room.

My solution to those who do not own a colorimeter to measure the brightness of their display is to use a search engine to find reviews with 0-100% Menu or OSD colorimeter measurements of the brightness, contrast and black depth to get an idea of how bright a display is. My display buying guides and are based off of my own reviews and reviews from over fifteen sites linked to in my post linked below:

Here are three examples of the Brightness and Contrast Colorimeter Measurements of the 0-100 Menu or On Screen Display settings for the Viewsonic XG2703-GS: 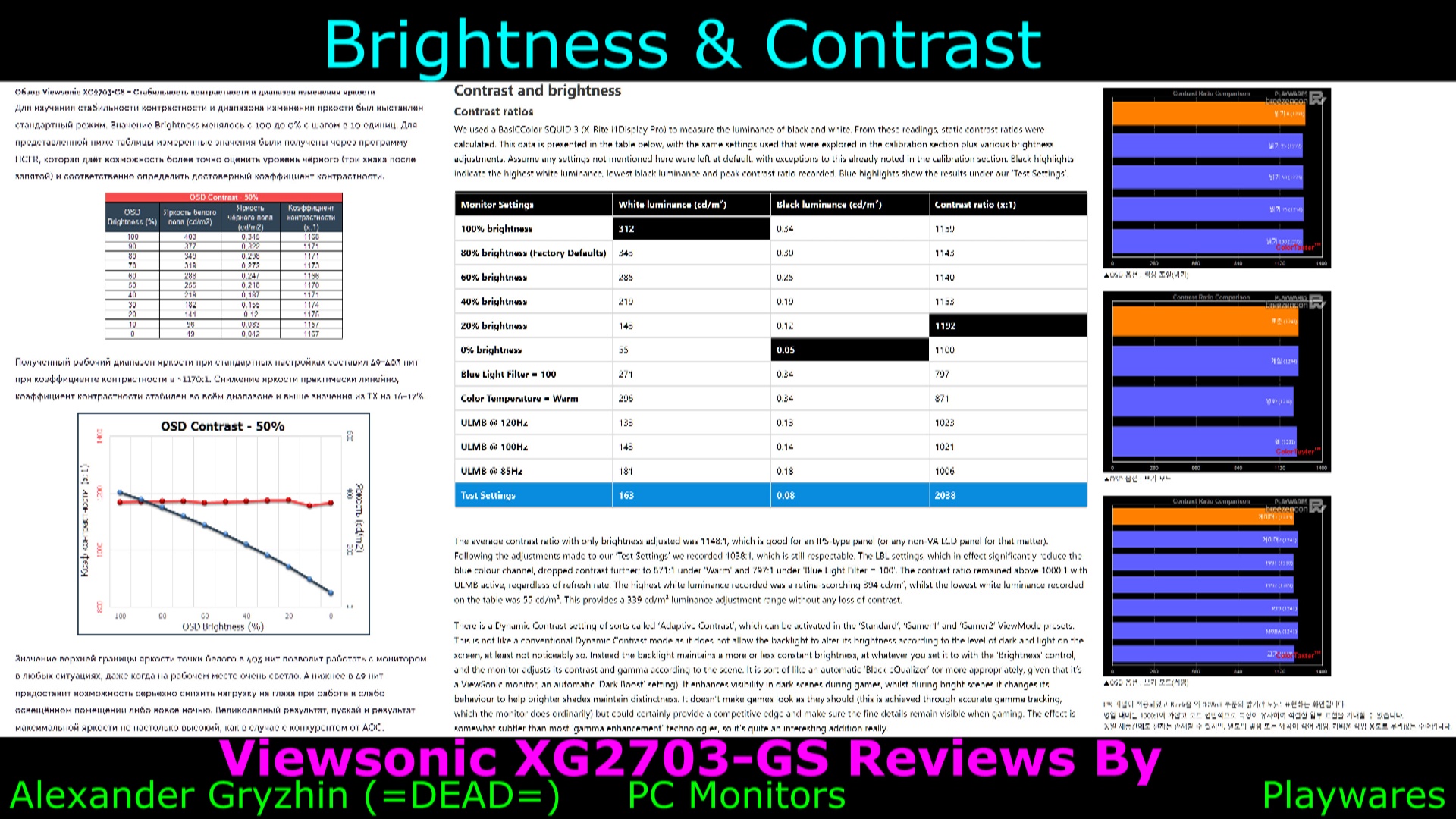 The second solution is to figure out how bright the room lights are, or consider using curtains if sunlight is the only light source. Check the box the light came in to see if the lumens (brightness) is listed, and/or check the bulb itself. Many lights do not have any information printed on both the box and bulb which makes determining their brightness impossible without a colorimeter.

I use a CFL ceiling light which I purchased for 15$ (Canadian) plus tax over three years ago. CFL lights loose brightness over time, and if broken are hazardous. Similar LED equivalents exist, but they cost significantly more. Here's an example of a similar, but slightly warmer or more orange or yellow 5000k 2500 lumen LED light by Lohas. I am not endorsing this light since I have not used it, however given the potential safety issues I suggest spending more on an LED light. Also note that buying directly from Lohas may not be the cheapest way to get these lights.

If wanting to set the display brightness higher a brighter light is needed to combat the higher display brightness. A 4000 lumen bias light (light placed behind the display) can combat a display outputting around 200cdm/2 and less than 250cdm/2. I also own this Feit Electric 4000 lumen 5000k LED light which costs 35$ US/50$ CAD and only needs 38w of power which is a low enough amount to work with most lamps. The light is heavy though, so make sure to put it in a lamp that will not fall over.

I use a Philips 2600 Lumen Daylight/6500k Light as my ceiling light and 5x LIFX BR30 lights as bias lights behind my triple monitor set-up which consists of the glossy HP 24 Envy, matte Viewsonic VP2780-4K and matte Qnix QX2710. I replaced the 4000 lumen Feit light with the LIFX lights since their color can be changed, and because equivalents with the features I wanted were not reasonably priced or available where I live at the time of purchase. Note that only certain color temperature setting outputs the maximum brightness or lumens listed in the specifications of color changing lights.

I use bias lighting for media since I like to avoid seeing glare or reflections, and because one of my monitors, the HP 24 Envy, uses a glossy coating which looks washed out when light shines on it: 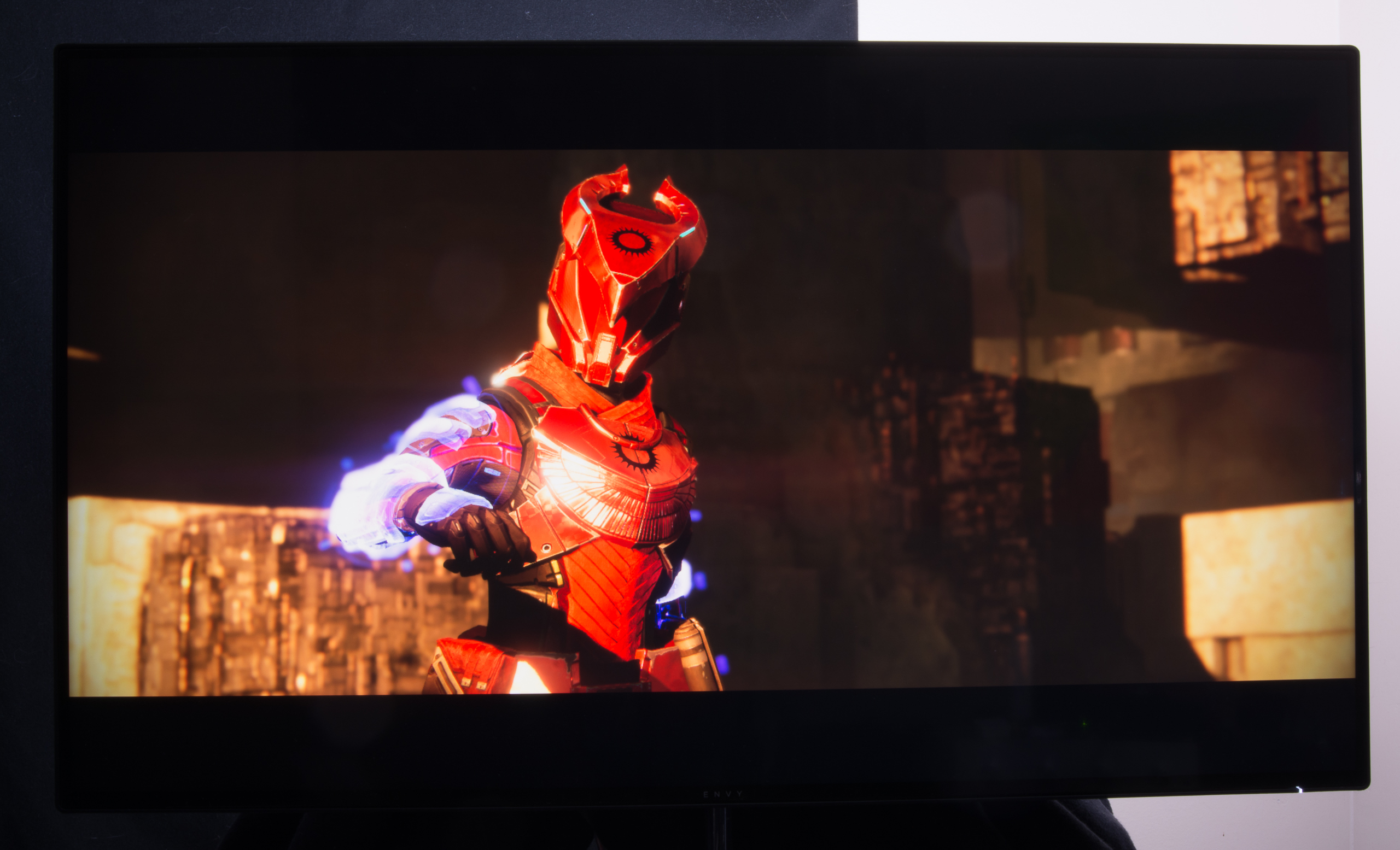 Notice how different the LED back-lit LIFX BR30 lights display 6500k compared to the CFL light. The monitor is also placed on my desk instead of on a stool in front of my closet. 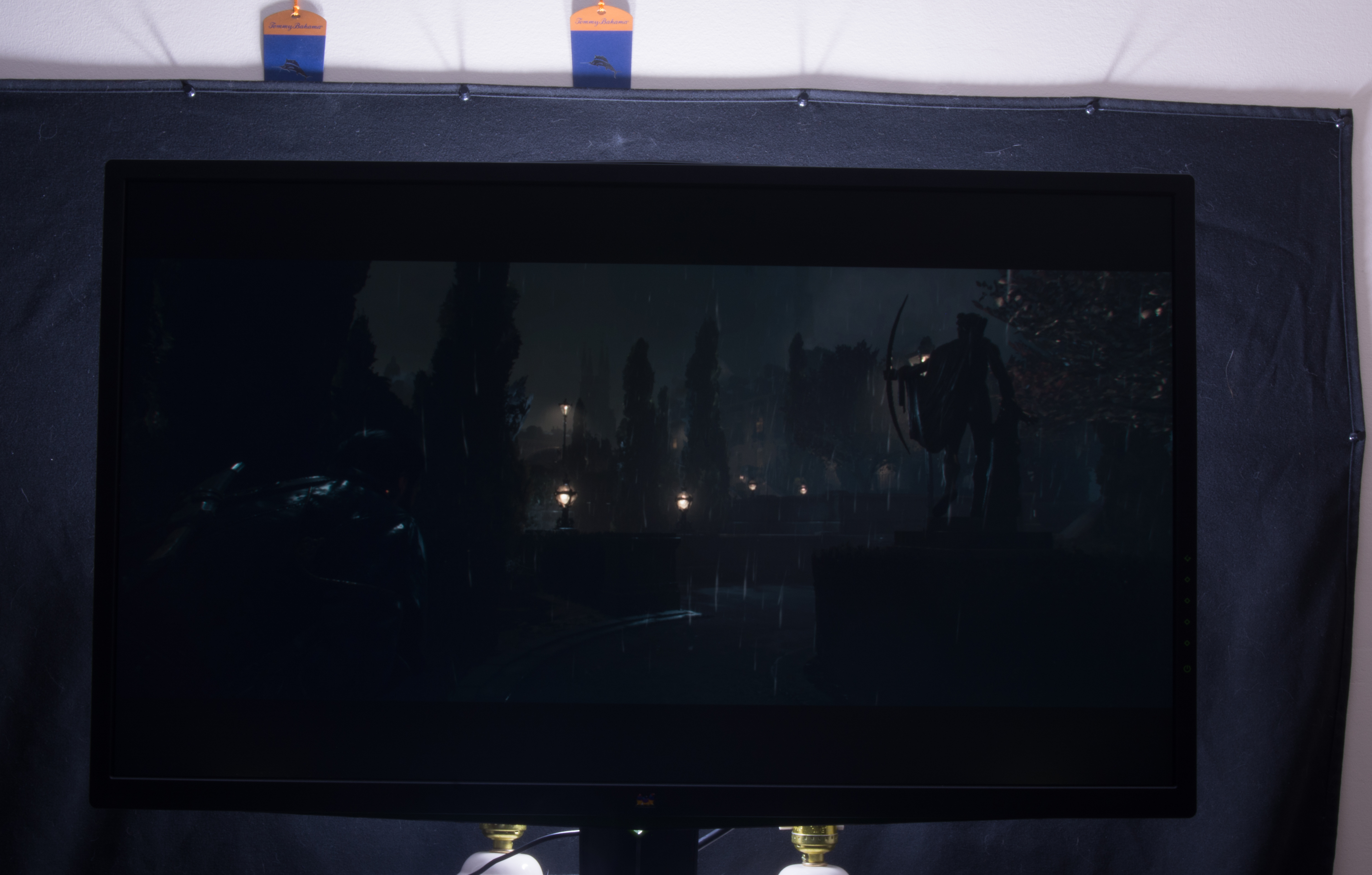 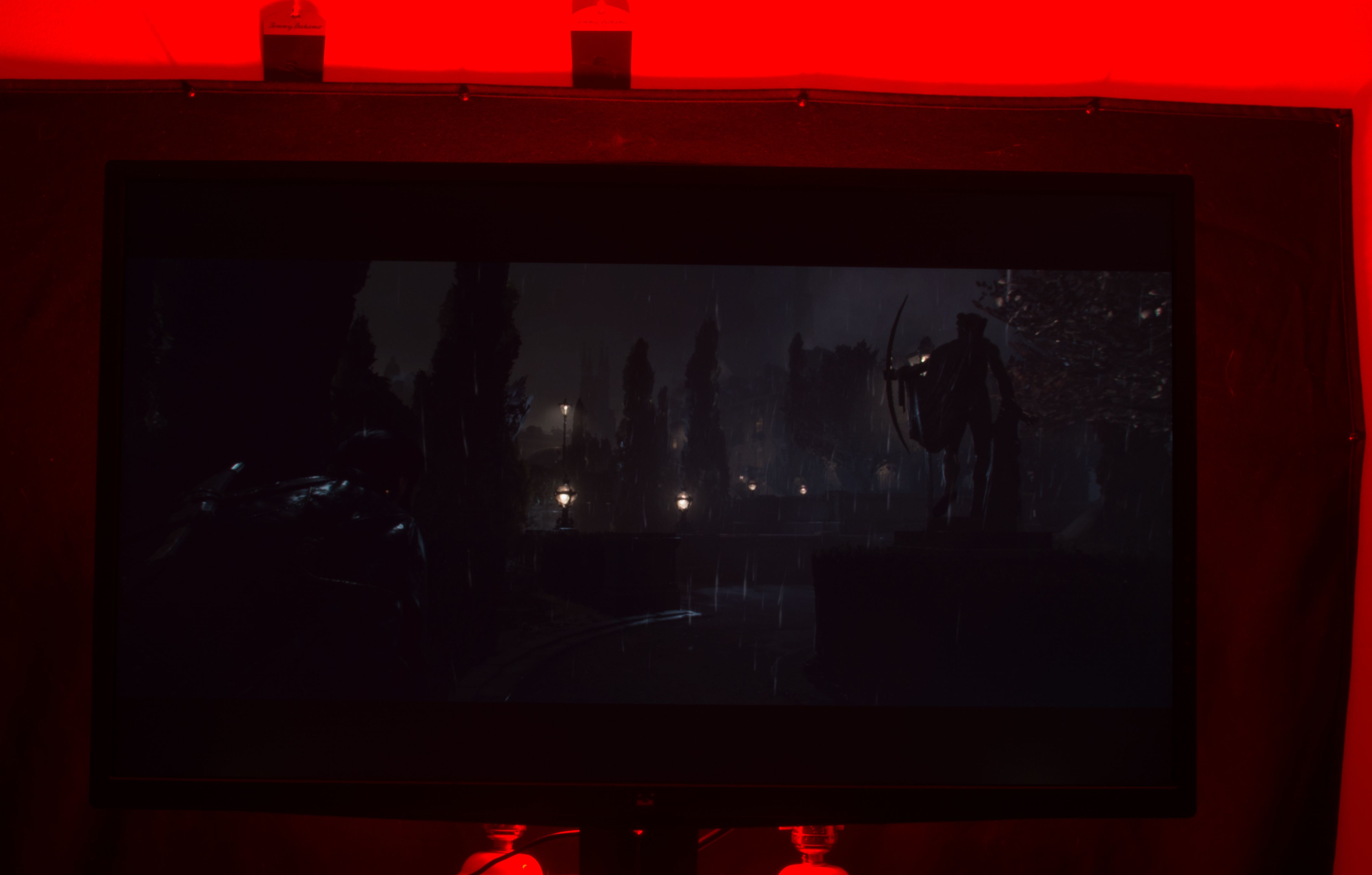 Two of the four LIFX lights are placed behind my other monitors off to the right, but are not directly shining on the monitor.

If Applicable Clink On the Monitor Name To See More Information and Review Links on WCGT. Use Ad Block.