The Festival and Festivities associated with Hinduism are a complex undertaking of symbolism and storytelling. From the popular festivals like Holi, Dussehra, and Diwali to the lesser known such as Angalaamman Mayana Kollai have stories to be told.

In the story of angalaamman has elements of betrayal, hatred and salvation from the chains that bind these emotions.

Shakthi, The formless goddess associated with creation itself was reborn as Parvati. This was during the time when Sandobi and Sundaran, two demons terrorized the gods and men. Brahma, The Creator god performed yagna for protection against the demons. Out of this yagna Tilottam, an apsara (a being of divine beauty) appeared. Attracted by her beauty the demons and Brahma started following her. She consequently seeked refuge in kailash abode of Lord Shiva, Where brahma followed her. 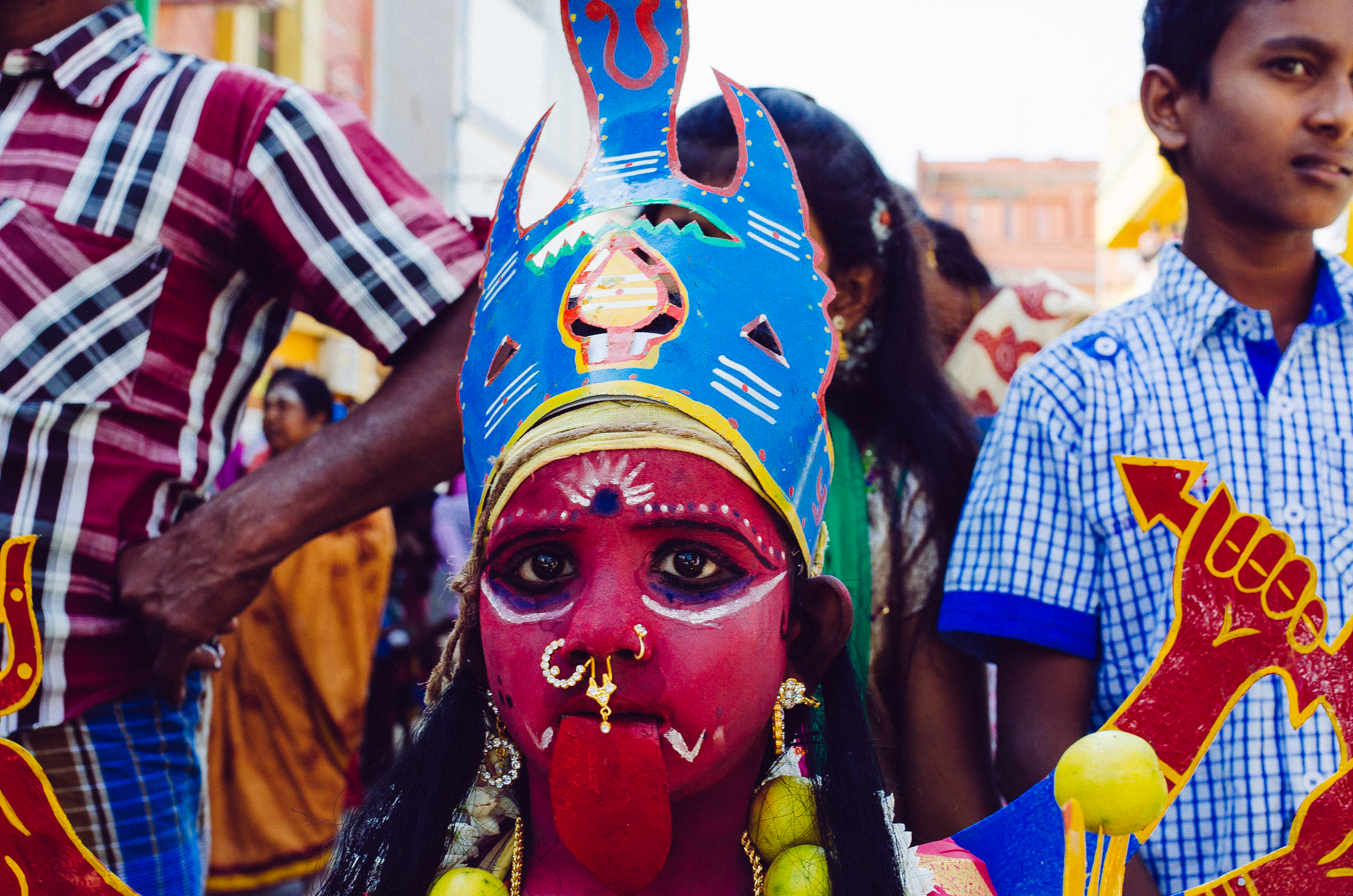 A young girl dressed as Angalamman.

Brahma, like Shiva had five heads. This was the reason why parvati mistook him to be her husband and fell at his feet in an act of submission † . Angered by this Shiva in the form of rudra beheaded the fifth head of Brahma and thus invoked a curse upon himself; The curse enabled the head to remain attached to his right hand and did not allow him to eat. The head (Kabala) was consuming all the available food instead of shiva himself. He became a mendicant and roamed earth begging and for food, sleeping in graveyards.

Parvathi pleaded her brother the Protector god Vishnu for a solution. He came up to the idea to trick brahma's head and told her sister this "My dear sister, go to Thandakarunyam graveyard with your husband and make a pond there named "Agni kula theertham" and prepare a tasty food made by Agathi keerai (Humming bird tree leaves) and blood of chicken and serve that food to kabala and then throw the food everywhere in the graveyard. The kabala will come down, leaving Shiva's hand, to eat the food. Then take your husband to the pond and clean him with that water so that it will not catch your husbands hand (Source: wikipedia)"

Parvathi follows her borthers instruction and frees kabala from her husband. Since he was sanctified by the water of the pond, it could not approach him and in turn got attached to parvathi. Parvathi ammasing powers of sakthi in a cosmic dance later destroys kabala by sheer scale and ferocity by brushing under her right foot. This Fierce form is called as Angara Rubam and She herself was later named to be Angalaamman. The temple in Kaveripattinam is dedicated in memory of this form of parvathi, a form where a "devout wife of god flails an evil obsessed head of a god" and relieves her husband from his curse.

The major function celebrated for angalaamman is "Mayana Kollai" celebrated in the Tamil month of Maasi; the English month of February and March. It consists of an Animal sacrifice, goats and chickens are sacrificed in her name or for her. The functions falls on a new moon day of the Tamil month Maasi (Maasi Amavasya)and the day before the new moon day is Maha Shivaratri which is the​ main festive occasion contributed for Lord Shiva. In Malaiyanoor the festivities are celebrated for ten days and Angalaamman is decorated in different forms and she is taken in a ​ chariot through out the streets of Malaiyanoor.(Source:wikipedia)

Below are few images from this festival. A stone diety decoarted to be angalamman 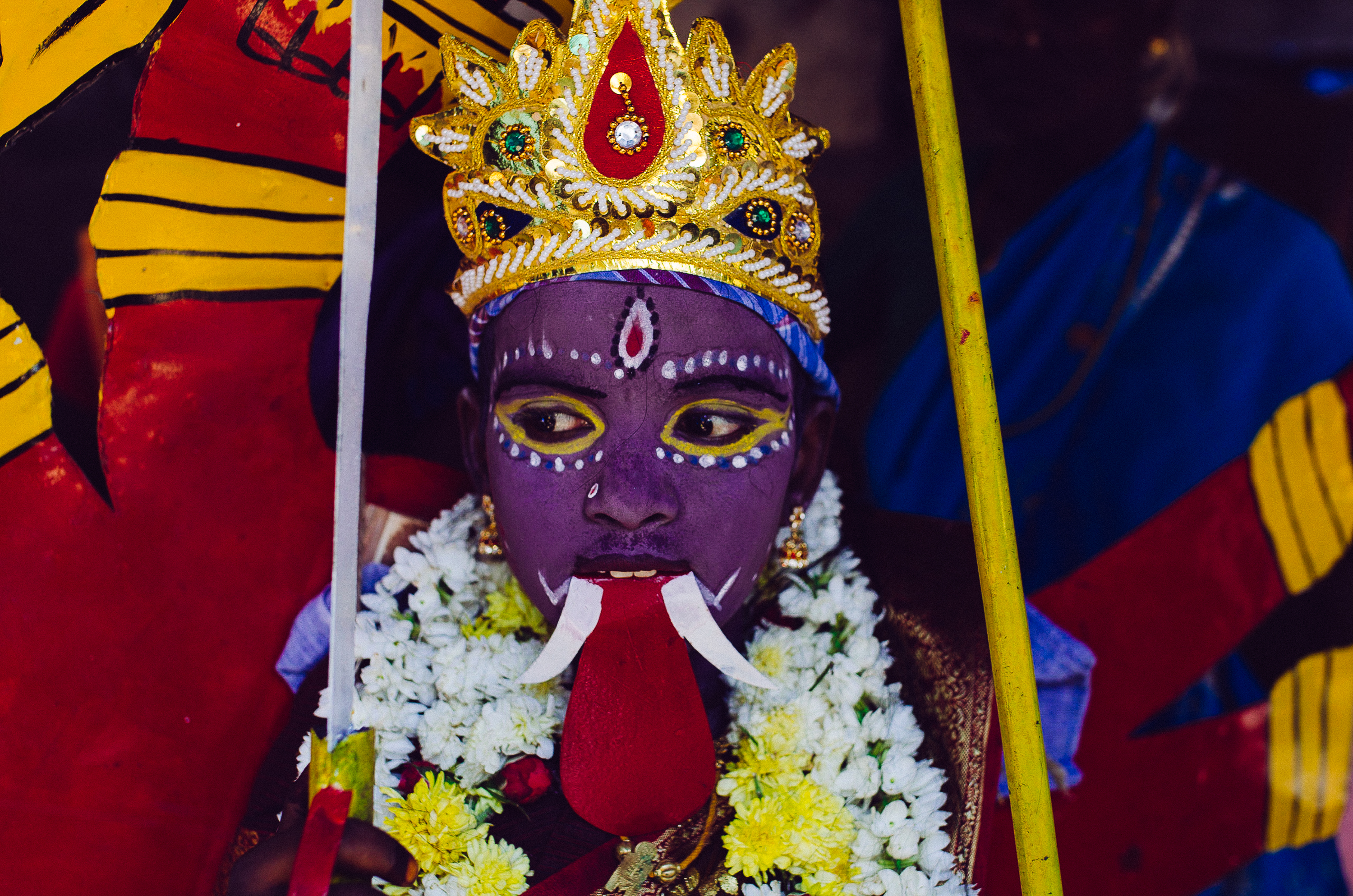 A woman falls into a state of trance during the festivities. Trance-like​ states are common throughout​t and it not known why. 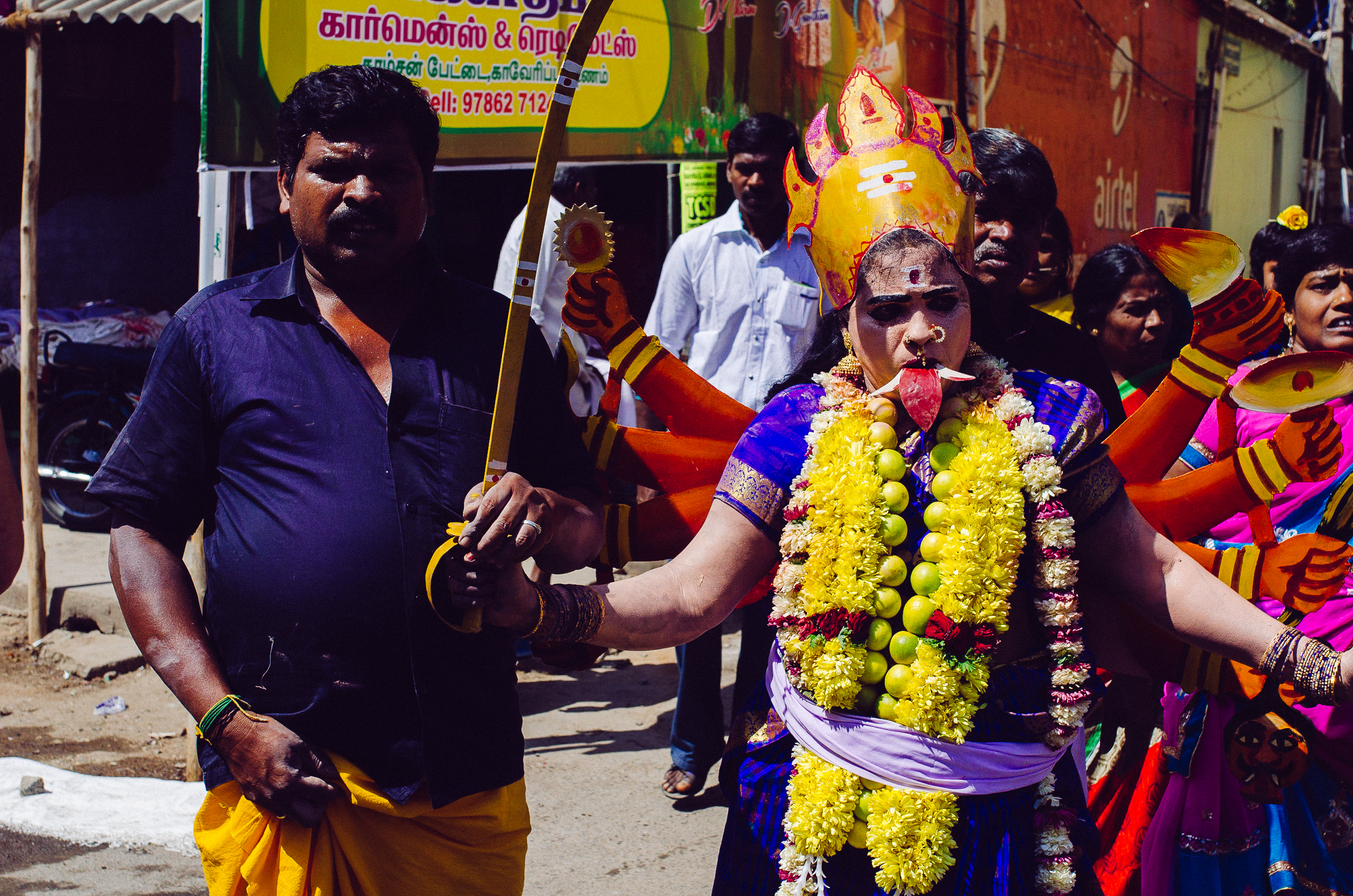 Another procession; A woman walks dressed as kali. Devotees walk to the temple from their place of residence usually chanting couplets written for the godess. Steel hooks are pierced through​ the skin of the devotees and tied to the end is a wooden block; The devotee then drags the bloc around the temple in a single run. The block is quite heavy and it is usually done by young men who had their wishes granted. 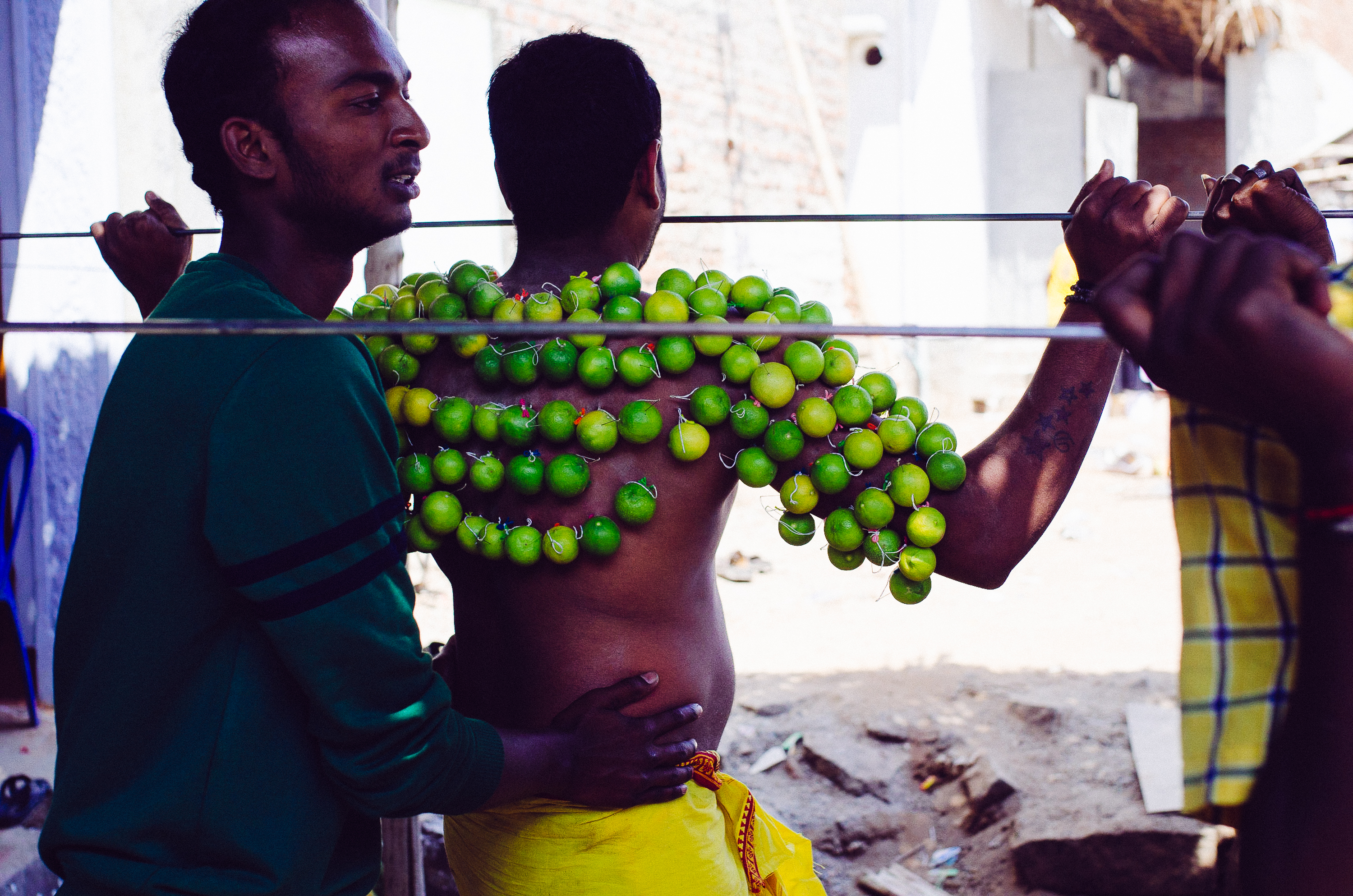 Limes are pierced​ with steel hooks and are stapled to the skin of the man. He then walks into the temple and has a prayer​.

† : It is unclear why as to she fell on his feet. This maybe not the case; It maybe that brahma tricked her into thinking he was shiva and something more intimate happened

Major Shout outs to @eroche for holding the monthly #culturevulture contest. @sweetpea for being a patient judge this month.

Shout outs to @sweetsssj, @timsaid and @deanliu @firepower @slowwalker for their amazing articles that are inspiring​ me and several others to write and share about food, culture and places.

I am from the Culture Vulture for CNers, a cross-culture translation project in collaboration with @ eroche and carried out by @ deanliu and me. We'll pick at least one article every week and translate it into Chinese, aiming to bring cultural diversity to the #CN community.

I am here to ask for your permission, to allow us to translate this article to Chinese. Author's liquid reward (SBD) from the translated post will be used for supporting the Culture Vulture Challenge project, and returning to the original author(s). Please feel free to ask us anything regarding this project. And please inform us if you do not wish your work to be translated.

Hello @ygern. Yeas sure Please go ahead and translate the post.

Thanks so much for sharing. I love all the traditional stories and myths and then seeing the festivals, although some of it is not for the fainthearted!

You are welcome. Yes, ​I do agree, some stories aren't​ really for the faint-hearted​.

I will far rather see the race of man extinct than that we should become less than beasts by making the noblest of God's creation, woman, the object of our lust.

The @OriginalWorks bot has determined this post by @harshameghadri to be original material and upvoted it!

For more information, Click Here! || Click here to participate in the @OriginalWorks sponsored writing contest(125 SBD in prizes)!!!
Special thanks to @reggaemuffin for being a supporter! Vote him as a witness to help make Steemit a better place!

Congratulations, Your Post Has Been Added To The Steemit Worldmap!

Congratulations @harshameghadri! You have completed some achievement on Steemit and have been rewarded with new badge(s) :

@royrodgers has voted on behalf of @minnowpond. If you would like to recieve upvotes from minnowponds team on all your posts, simply FOLLOW @minnowpond.

@royrodgers Thanks, ​man. Much appreciated.

Thank you for taking part in this months #culturevulture competition. Good Luck

@cryptohustlin thanks so much, yours is a great blog.

Well done on having your post chosen for translation! I am currently guest judge for the #culturevulture challenge and have added you to my list of favorites! Much love, @sweetpea

oh, that's​ so wonderful and really nice that you are considering this post. Much obliged. Best @harshameghadri.