bitbrain (63)in #cryptocurrency • 4 years ago (edited)

This is the last post in the Bitcoin price prediction chart display series. (for now anyway)

In this post I will show you an even broader view of how Bitcoin fits into the global market, and why it will continue to grow in value.

Like the previous two posts in the series, it will be largely graphical in nature, so that you can see what I mean.

If you haven't already read the first two in the series then please do so now to get the background info:

or feel free to continue if you think that you're sufficiently up to speed.

Two days ago we looked at Bitcoin price movement and predictions based on that.

Yesterday we looked at Bitcoin from an economic perspective and saw how that supported the first post.

Today we will look at Bitcoin from a TECHNOLOGY perspective, and hopefully you will see where it fits into the big picture. (Spoiler alert: it supports the previous two posts.)

The technology adoption cycle: The S-curve

The adoption of any new major technology follows a predictable cycle. This cycle can be plotted graphically and is known as the S-curve (because of its shape). The curve below is not the S-curve, but you need to understand it before we move onto the S-curve.

The picture is simple enough to understand; the adoption of a technology happens in five phases:

The graph below is from 2016 and shows where different technologies lay on this graph at that time: 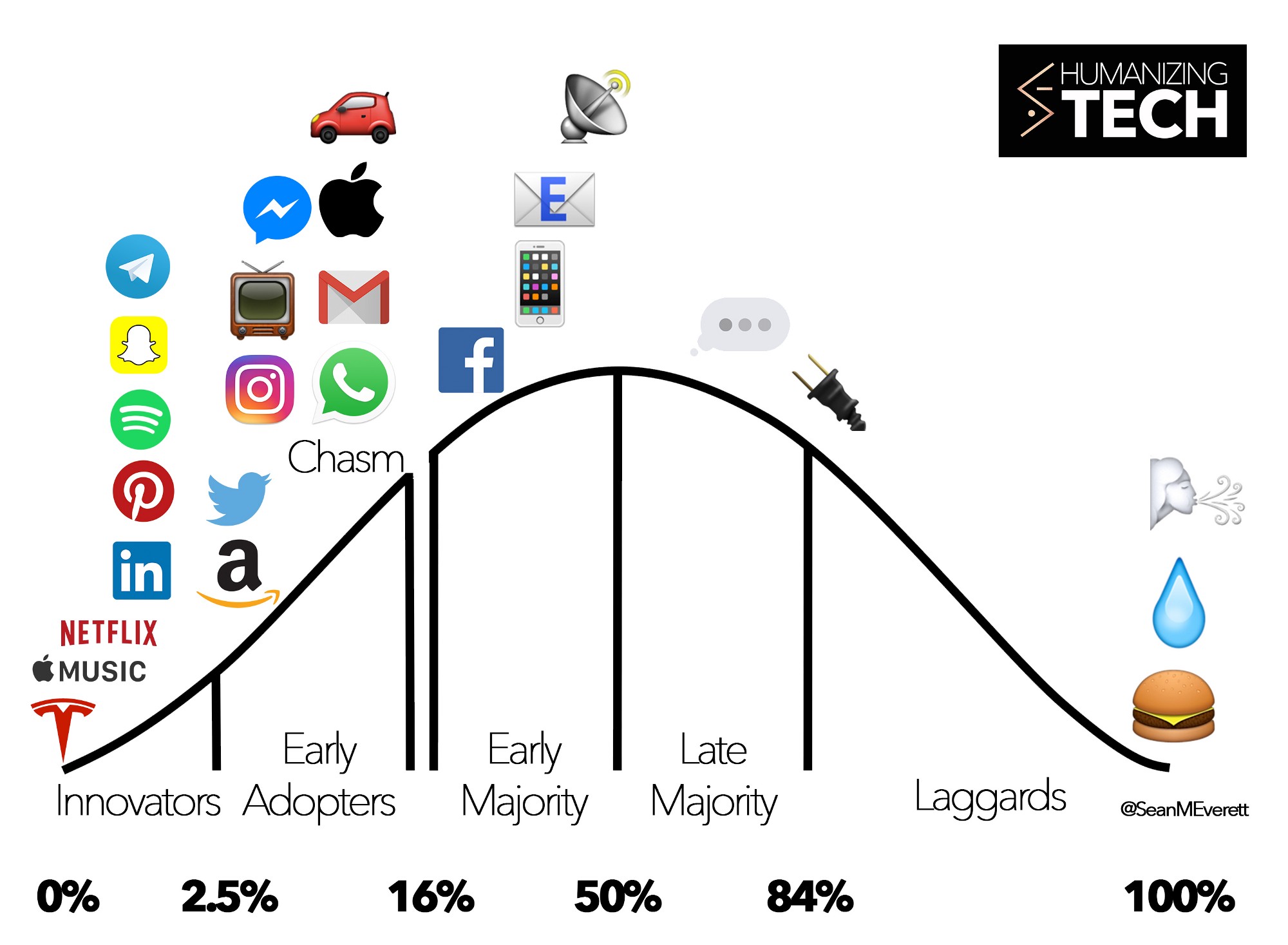 "The chasm" referred to on the graph is a point between Early Adopters and Early Majority, at which some technologies get stuck for a while and struggle to break through. It's not important in the context of this post, research it later if you want to.

If you look at the curve and think of a particular technology, e.g "the internet", the curve may be deceptive. While the second half of the curve slopes downwards, it's important to note that this does not mean that the technology is dying out, it just means that the rate of adoption (the rate at which new people start to use the tech for the first time) is slowing down. The technology itself is still growing. Because it better represents the growth of the tech, this is where the S-curve comes into play: Growth of a technology only stops after the laggards have adopted it. A technology will only start to die (i.e. negative growth) if it becomes obsolete and is replaced by something better. This is not indicated on the curve.

Bitcoin as a technology

Bitcoin is not a technology in itself, but it is the first, and biggest user of a technology known as the blockchain.

I'm not going to explain blockchains here, if you don't know what they are, then you honestly shouldn't have anything to do with Bitcoin yet. Want I want to do is point out that Bitcoin is the face of blockchain technology. It's the poster child, the first mover, the most popular, the word on everyone's lips. Just look at this post as an example: I'm speaking about Bitcoin, Bitcoin, Bitcoin. What I really mean is cryptocurrencies, cryptocurrencies, cryptocurrencies. But the word "Bitcoin" is more instantly recognisable to a much broader audience, which is why I specifically use it. (To clarify - the entire post actually does apply to the crypto market as a whole.)

My point is: Bitcoin is a technology.

More good news - tying it all together

If Bitcoin is a technology, then we can apply the technology adoption S-curve to it. That is great news!

In case you don't quite believe me about the S-curve yet, look at a few more examples of technologies and how they follow the curve. Note an important trend: recent technologies get adopted far faster than older ones. 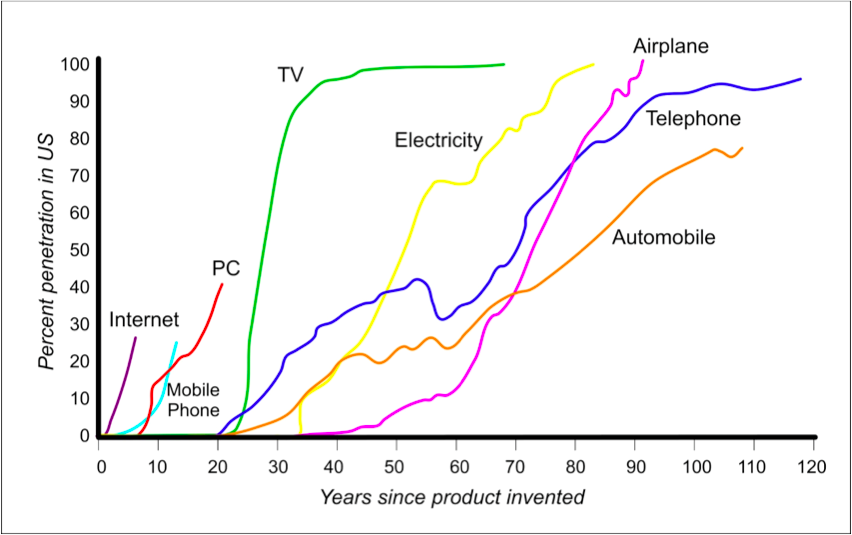 Not the most up to date picture, but it is simple enough to follow easily and to see examples in action. Here is a slightly more complicated (and more recent) one:

By now you can hopefully imagine a similar curve for Bitcoin/cryptocurrencies on such a graph.

And this is where it gets exciting, because how far up that S-curve would Bitcoin be?

Bitcoin is DEFINITELY NOT in the "Early Majority phase" yet, but it is probably out of the "Innovators phase" by now. Your guess is as good as mine, but I guess that we are somewhere around the 5-10% adoption mark i.e. the first half of the Early Adopters phase. This is what I think: 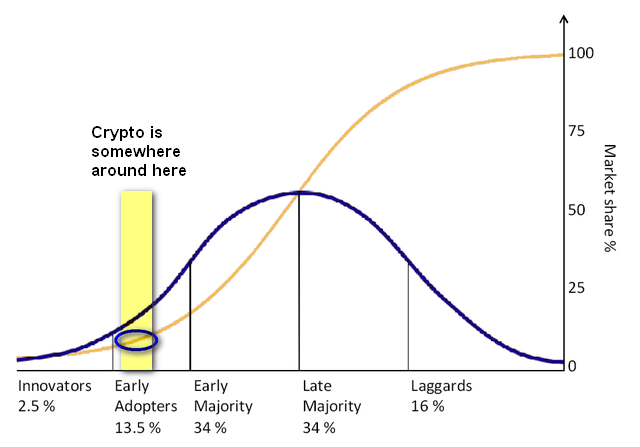 So it can easily be seen that Bitcoin (and crypto in general) has a LOT of growing to do at a vastly increasing rate for the foreseeable future! The S-curve shows, as clear as the nose on your face, that the rate of growth of the crypto market will continue to increase, rapidly, for at least several years to come. The 100% mark on that curve is far away from where crypto adoption is now! Put simply, more and more users will come faster and faster.

Now if that is not good news for crypto investors, then what is? Who cares about dips in the market? Not me, I'm thinking long-term!

But wait! There's even more! Order now and we'll also throw in this free...

The more people who adopt Bitcoin, the more valuable it will become, not just for the obvious reason of pushing up price and creating demand, but also because of the network that it creates. Networks follow something called "Metcalfe's law" which states that networks increase in value with the square of their number of users (or something along those lines, I'm paraphrasing). To save time I will skip the details, read more about it here if you want to. https://en.wikipedia.org/wiki/Metcalfe%27s_law

This concludes the Bitcoin price predictions chart series. I hope that this final post has shown you how Bitcoin (and all crypto) fits into the global economy as a technology. I hope you can see that as it is adopted more, so it will grow in value and utility. I believe that there is a very bright future for crypto and for that reason I am extremely bullish in outlook.

I do not for one second believe those who speak about the current bear market continuing for much longer. To me that is a nonsensical, poorly based statement and an economic impossibility, even if traditional stock markets are taking strain (like the Dow Jones currently is). When you encounter such people, just send them 'ol Bit Brain's way, I'll argue with them for you. 😉

Positive things are coming for crypto, very positive. And if you don't believe that, well then, why are you investing in crypto at all?

Yours in crypto,
Bit Brain

My thanks to @bobcastleman whose comments on my post of yesterday inspired me to write this one today.

I am not a financial advisor nor am I a professional trader/investor. This is not financial advice, investment advice or trading advice. Unless otherwise stated, all my posts are my opinion and nothing more. Crypto is highly volatile and you can easily lose everything in crypto. You invest at your own risk! Information I post may be erroneous or construed as being misleading. I will not be held responsible for anything which is incorrect, missing, out-of-date or fabricated. Any information you use is done so at your own risk. Always Do Your Own Research (DYOR) and realise that you and you alone are responsible for your crypto portfolio and whatever happens to it.

Thanks. Glad you enjoyed it. Check out a few of my others if you have the time. I've only been doing this for about two weeks now, so any feedback, good or bad, is most welcome.

I wonder what will become of blockchain, how it will evolve. Just looking at the evolution of mobile phones for example, first analogue, then digital, then the different modulation systems, GPRS, EDGE, the 'G' evolutions etc.

I don't think blockchain will stay exactly the same, I expect it will constantly evolve into something we won't recognise in a few years time. Will be interesting to see it unfold over time.

Very good question. The question is more how will it evolve, or even will it be replaced?

I believe that the blockchain is here to stay. The idea is sound and does not need much modification. The methods of implementation may well evolve i.e. the hardware and software the blockchains run on. It's like having tar roads. The roads don't need to change, but the vehicles that run on them do.

So blockchains will become sleeker and more efficient. Already we have seen much of this: Segwit, the Lightning network, trinity, PoS vs PoW, environment friendly mining etc. Fundamental breakaways from the core blockchain design (like hashgraphs and tangles) have received a firm "meh" from the crypto universe.

You see, a blockchain can already do everything that it is required to do, there is no need to change it as an underlying construct. Secure? Check. Immutable? Check. Freely accessible? Check.

No tech is perfect, but I believe that blockchains will be around, largely unchanged, for a long time to come. They may look very different 20 years from now, but under the hood the differences will be small. Sort of like Microsoft Windows: Windows 10 LOOKS very different to Windows 3.1 from the 90s, but their core systems are largely unchanged, there is just a veneer of modern influence and compatibility pasted over the top.

I think it's possible it might be replaced. Now the 'idea' is out there in the public sphere then some smartarse will probably come along with a better version, that's how it normally goes for most new tech lol.

The concept was great with Bitcoin etc, but the fact that transactions are now so slow and cost so much it's useless as its intended purpose, as an alternative to fiat. Such a shame, I think it was a victim of it's own success. But as you said, things are always developing and moving forward, so the future looks good.

Nano uses the same tech and is virtually instant. The lightning network can have the same effect for BTC. MOST cryptos transact much faster than BTC.

"I'm not going to explain blockchains here, if you don't know what they are, then you honestly shouldn't have anything to do with Bitcoin yet"

I think for Bitcoin to get beyond the early adopter stage and go mainstream people will not need to know anything about blockchain. They will want it to be easy to use and secure. That's about it. All the technical stuff is magic pixie dust as far as they're concerned.

I consider the concept (not the detail) of an immutable but publicly accessible ledger to be a prerequisite to comprehending why blockchains are important. Without that knowledge, you couldn't distinguish a blockchain DApp from a regular computer programme. If people can't do that, then product differentiation will never occur and blockchains won't catch on. Joe Soap must know a "little" about why his e.g. blockchain lending platform, can't cook the books and defraud him of his money.

Perhaps a lending platform was a bad example: Bitconneeeeect!

Congratulations @bitbrain! You have completed some achievement on Steemit and have been rewarded with new badge(s) :